Scientists have created a self-lubricating condom that becomes slippery during intercourse.

The newly-developed contraceptive secretes a lubricant when it comes into contact with bodily fluids.

And it stays slippery for 1,000 intercourse ‘thrusts’, according to a study by Boston University.

By making condoms more appealing, they add their invention could reduce both unplanned pregnancies and STIs.

‘A method that extends the duration of lubrication would improve many condom users’ sexual experiences and potentially increase condom usage,’ the researchers wrote. 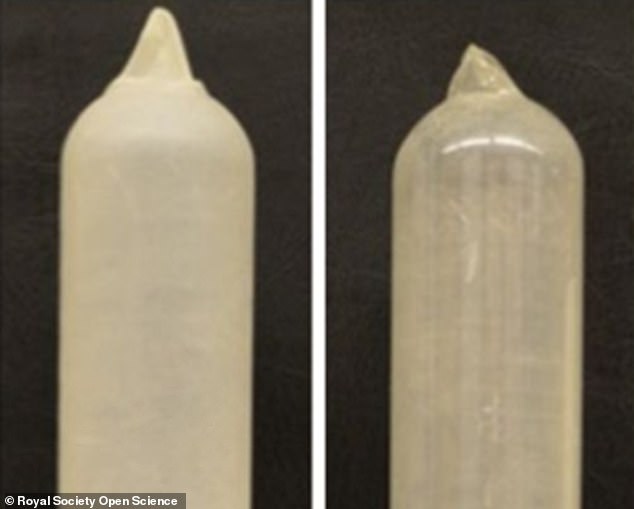 The researchers coated a latex condom with a thin layer of a substance that becomes slippery when it touches water (right). They then compared how much friction this creates and how many ‘thrusts’ it stays lubricated for against a standard condom without lubricant (left)

The researchers coated a latex condom with a thin layer of a substance that becomes slippery when it touches water.

Strong chemical bonds then form between the substance and the condom, which extends how long it remains lubricated for, they claim.

The same substance coatings are already used in urinary catheters, according to Dr Nicola Irwin, from Queen’s University, Belfast, who was not involved in the study.

To test their self-lubricating condom, the scientists rubbed it against a skin-like surface 1,000 times in a study backed by the Bill and Melinda Gates Foundation.

This determined how much friction the contraception created compared to standard condoms.

Results showed the self-lubricating condom caused 53 per cent less friction than when a standard condom is used without any lubricant.

The findings also revealed condoms that have lubricant applied to them reduced friction by 55 per cent, however, many people find this application messy and that it interrupts sex.

HOW DO SELF-LUBRICATING CONDOMS WORK?

Standard latex condoms are coated in a substance, known as HEA/BP and PVP, which becomes slippery when it comes into contact with water.

Water is a key component of bodily fluids, such as those found in the vagina.

When this condom is then exposed to light to ‘cure’, strong chemical bonds form between the contraception and its substance coating.

These bonds are hard to break and allow the condom to remain lubricated for up to 1,000 intercourse ‘thrusts’.

And even after simulating 1,000 thrusts, the self-lubricating condom stayed ‘slippery’.

While the condom that had a shop-bought, water-based lubricant applied to it started to lose its wetness after just 600 thrusts.

Intercourse typically involves between 100 and 500 thrusts, according to the scientists. However, some sessions last longer.

The researchers, led by Benjamin Cooper, also asked 33 adults whether they liked to use condoms during sex and if they preferred the self-lubricating alternative’s slippery consistency.

Some 70 percent rated the new condom as ‘much’ or ‘very much’ more slippery than standard ones.

‘It feels a bit slimy when you handle it dry, but in the presence of water or natural fluids it becomes really slick,’ Professor Mark Grinstaff said.

‘You only need a little bit of fluid to activate it.’

And up to 100 percent of the participants claimed a self-lubricating condom is preferable over existing brands.

Fifty-five percent even said it would make them consider upping their condom use.

The study was published in the Royal Society Open Science journal.

Studies investigating how well the self-lubricating condom performs against other brands could begin as early as next year, according to the researchers.

A spin-off company from the university is planning to develop a product for the market. It is unclear when it may be available. 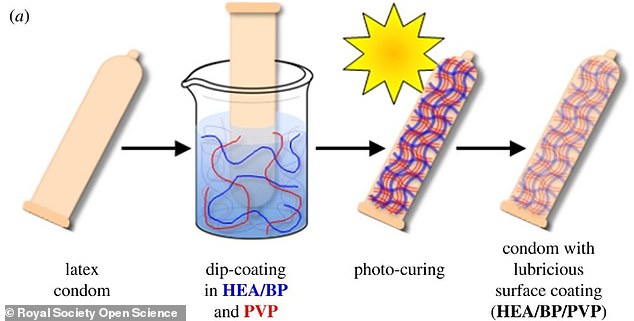 The scientists took a latex condom, which they coated with a thin layer of a substance (HEA/BP and PVP) that becomes slippery when it touches water. The condom was then exposed to light, which caused strong chemical bonds to form between the substance layer and the condom

However, the friction they cause during intercourse can be painful, with 77 percent of men and 40 percent of women claiming condoms make sex less pleasurable.

‘Microtrauma’ to the vagina caused by condom friction can also increase the risk of STI transmission if they split.

‘Condom-associated discomfort is a common ‘turn-off’and a highly cited reason for persuading one’s partner to forgo using condoms, so many individuals choose to use lubricants to decrease this discomfort,’ the researchers wrote.

However, existing lubes often get absorbed into a woman’s vaginal tissues, meaning they may have to be reapplied during sex.

Bekki Burbidge, from the sexual health charity FPA, told the : ‘We welcome new innovations to encourage condom use.

‘Condoms are the only method of contraception that also help to protect against STIs, so it’s important that people feel confident and comfortable using them.

‘Lubrication can make sex more comfortable and enjoyable so we encourage people to try out different water-based lubricants as well as different sizes, shapes and textures of condoms to find out what suits them and enhances their sexual pleasure.

Pope Francis and U2 frontman Bono share an embrace in Vatican City
Celebrities including Seth Meyers, Mindy Kaling and Reese Witherspoon show off 'I Voted' stickers
Gender-neutral pronoun 'ze' to be accepted in English version of Scrabble
Who are the world's richest people?
Prince Harry was ‘desperate to avoid’ brother William at church service claims body language expert
Elizabeth Smart brings together six kidnapping survivors to help Jayme Closs
Trump will launch 2020 campaign four years to the day as MAGA World gets ready for 2016 redo
Savannah Guthrie reveals she has PNEUMONIA