Prince Harry has playfully swatted flies away from a woman during his trip to country Australia – prompting his pregnant wife Meghan Markle to burst out laughing.

His hilarious parody of the ‘Aussie salute’ – where Australian wave their hands in front of their faces to keep away flies – happened as Ruth Sondow, who’s a representative of the Royal Flying Doctors’ Service, delivered a speech about it’s importance to remote Australia.

The hilarious moment was captured on camera during the Duke and Duchess of Sussex’s royal visit in Dubbo in northwestern New South Wales on Wednesday.

The video shows Prince Harry waving his hands around in an attempt to drive away the bugs as Ms Sondow spoke – driving both the crowd and Meghan to hysterics.

The footage won public approval, with many praising the prince for his genuine gesture.

‘If this doesn’t put a smile on your face I don’t know what will,’ one said.

‘Refreshing funny side of Harry! What a sweet family they make!’ another wrote.

Another posted: ‘Harry is just himself and we love him for it.’

One said: ‘Oh my God! I have never seen Prince Harry so funny like that. That’s so cute and hilarious.’

Another wrote: ‘I can’t stop watching this clip! He’s so funny!’

And another commented: ‘I just love Prince Harry, he is a real genuine person so down to earth.’

The couple met with the Royal Flying Doctor Service to learn more about the aviation organisation’s provision of emergency health services for people living in remote areas. 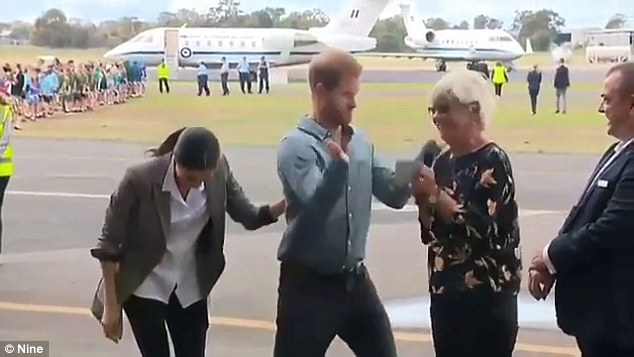 Prince Harry has playfully swatted flies away from a woman who was delivering a speech, prompting his pregnant wife Meghan Markle to burst out laughing 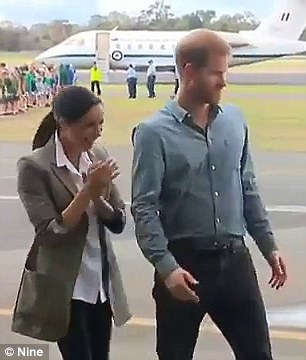 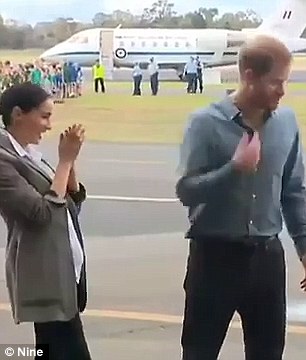 Earlier on Wednesday, the Duke and Duchess of Sussex unveiled the RFDS fleet’s newest plane.

The team of doctors said meeting Prince Harry and Meghan was a welcome change of pace.

‘I explained to them some of the equipment we take on our retrievals and they were really interested in it and the amount of things that we can do in pretty much a hospital environment,’ doctor Shannon Townsend said.

She said the couple was ‘lovely’ describing them as ‘very personable, easy to talk to – beautiful people’.

Fellow doctor William Ibbotson said having the royal couple visit would deliver an invaluable boost to the RFDS. 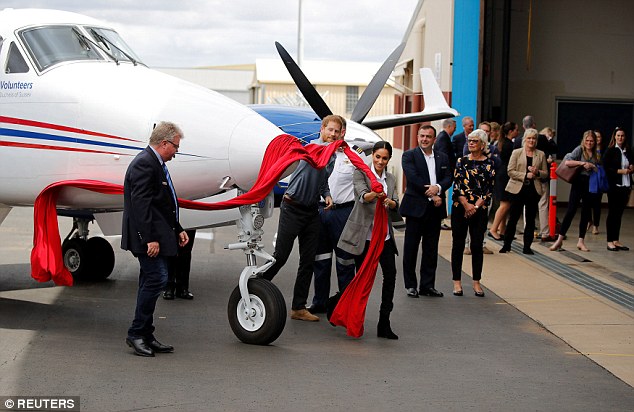 Earlier on Wednesday, the Duke and Duchess of Sussex unveiled the new aircraft for the Royal Flying Doctor Service 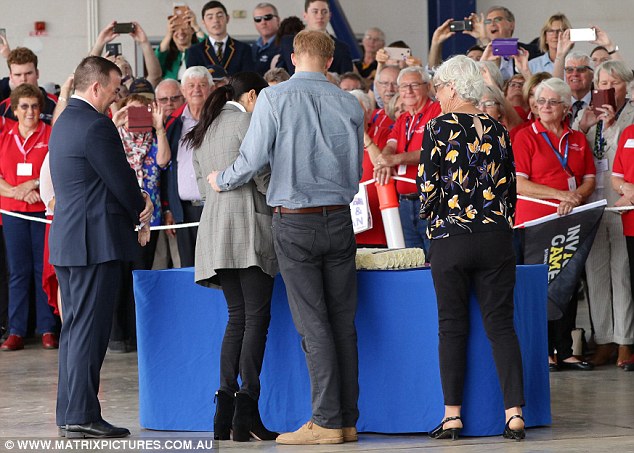 Former and current RFDS patients and children from nine different schools in region were among the crowd gathered at the hangar to meet the royals.

The duke and duchess met repeat patient of the service, Carol Pennell, now in her 70s, who in 2014 was stranded in Hungerford, a seven hour drive with 200km of poor road conditions.

The group raised the money for the local emergency retrieval transport to mark the 90th year of the RFDS, which was given its royal charter by the Queen in 1955. 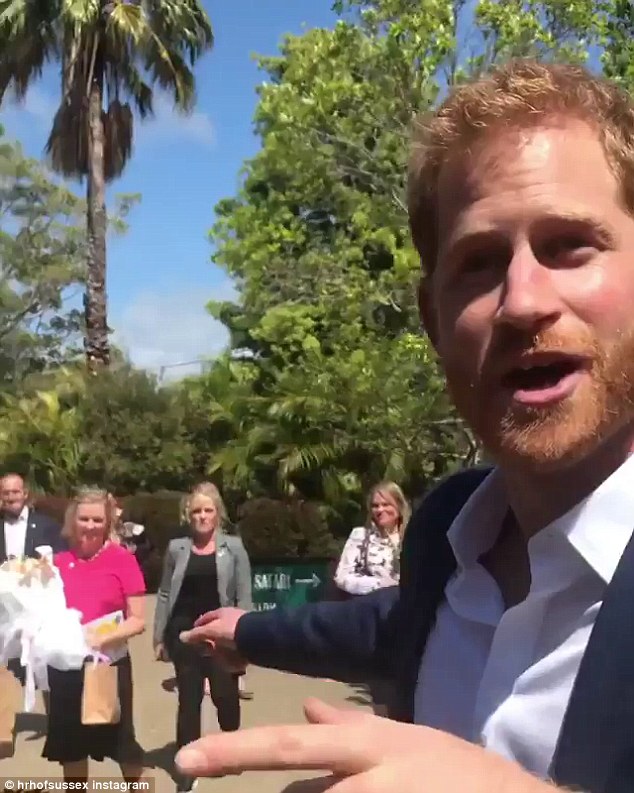 Pointing a cheeky index finger at the waiting press and patrons, Prince Harry retorts: ‘You can’t give flowers that big to my wife, what is that all about?’ 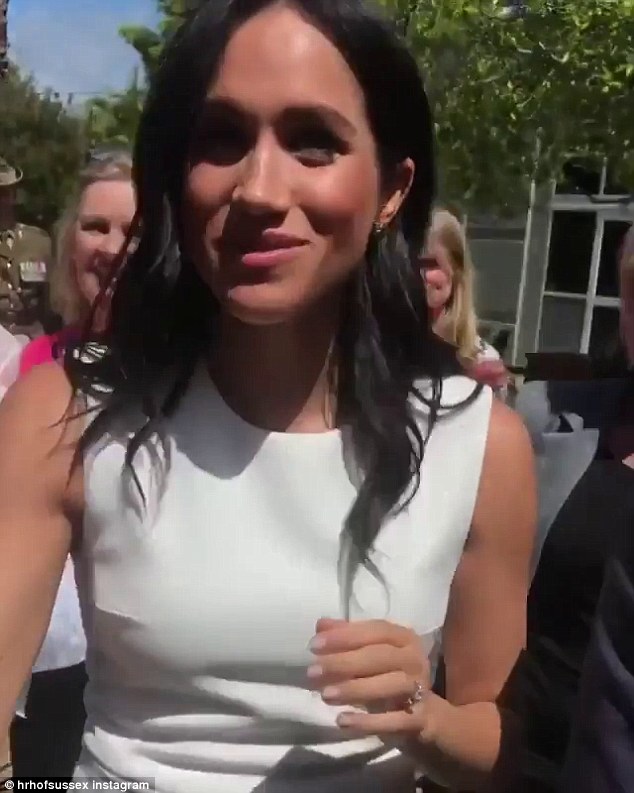 The crowd laughs as a glowing Meghan joins him, saying: ‘Thank you for my flowers!

The latest video comes just a day after  jokingly scolded a spectator at Taronga Zoo for giving his wife a large bouquet of flowers.

Pointing his index finger at the culprit, a grinning Prince Harry said: ‘You can’t give flowers that big to my wife, what is that all about?’

The crowd laughed as a glowing Meghan joined him, saying: ‘Thank you for my flowers!’

The busy itinerary continues on Thursday when the royal couple visits Melbourne, with the Duchess not showing any signs of weariness after announcing her first pregnancy.

Firefighters battle massive blaze at 200-year-old Rio...
Jamie Lee Curtis reveals regret after replacing an Australian actress in 80s film Road Games
China Jan-Sept total trade with North Korea down 57.1...
Wheelchair bound man and his wife hit back at trolls who attacked their 'interabled' relationship
Bercow sat amid the drama, just how he likes it: HENRY DEEDES on an epic scene in the House
White House staff 'restricted access to records of Trump's calls with Putin and Saudi Crown Prince'
Tributes to 'beautiful and amazing' barmaid, 25, who was found dead near fire station
Union warns classrooms will become 'centres of transmission' if children forced to return too soon