The premier of the ‘Rosanne’ reboot, ‘The Connors’ aired Tuesday night, sans Roseanne who was killed off with an opioid overdose.

In the first part of the show, the family sits around lamenting that they miss her, and at first it appeared she had died of a regular heart attack, however before the first commercial break, it is revealed Roseanne had a drug problem.

Her husband Dan (Jim Goodman) says he had flushed remaining pills from her knee surgery down the toilet, but then daughter Becky (Sarah Chalke) says she found pills in her mother’s closet but that they weren’t prescribed to her.

After the second commercial break, Darlene (Sarah Gilbert) picks up a bag of pills that is on the kitchen table. Roseanne’s sister, Jackie (Laurie Metcalf) says that stash was in the pills.

Roseanne may have lost its creator, executive producer, writer and star, but it turns out the show is doing just fine in its return as the re-titled ABC sitcom The Conners.

A very thin stream of reviews have been released ahead of the show’s return on Tuesday, and they are all some of the best notices the show has received in its eleven seasons on the air.

Those reviews also confirm that Roseanne is gone but cannot reveal why, with DailyMail.com reporting last week about the character’s fate.

It remains to be seen, however, if this will translate into viewers, with the network expected to take a big hit in the ratings department when The Conners premieres on Tuesday. 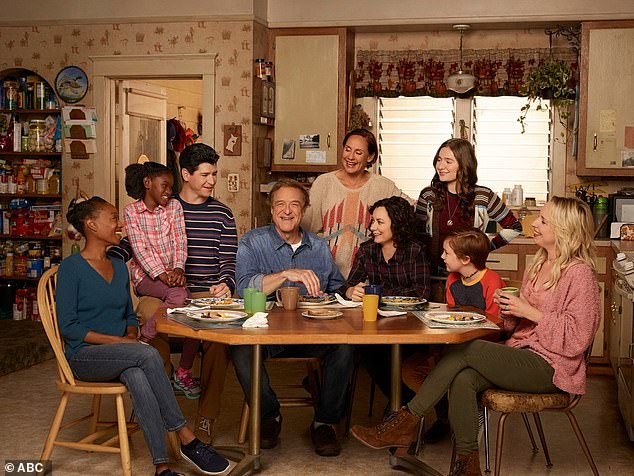 They’re back: The Conners is getting the best reviews in its eleven-season history after the exit of creator and star Roseanne Barr (cast of The Conners above) 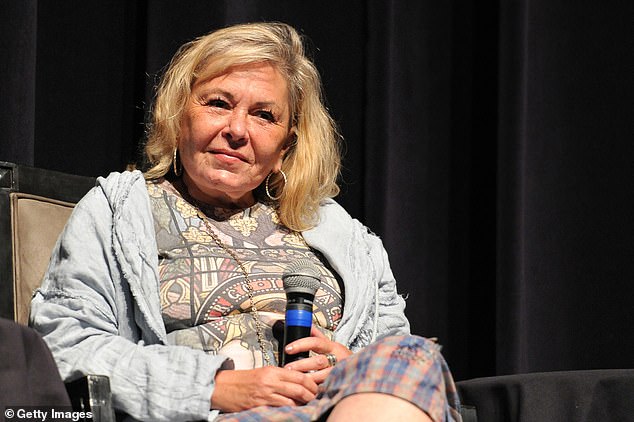 No more: Those reviews also confirm that Roseanne (above in September)  is gone but cannot reveal why due to an embargo out in place by ABC

In his review for IndieWire, Michael Schneider writes that the show also manages to address the controversy that led to Barr’s termination in an exchange between Dan (Jim Goodman) and daughter Darlene (Sara Gilbert).

In the scene, Darlene tells her father that she wished she had known her mother better, to which he replies: ‘It wouldn’t have mattered. She was going to do what she was going to do. She never listened to a damn person in her life.’

In that same review, Schneider writes that Darlene has taken over as the lead in Barr’s absence, a transition that he believes works for the show.

‘Darlene isn’t Roseanne,’ he writes in his review, a reference to Barr’s larger-than-life person as opposed to her acting acumen.

‘But with Barr off the show, The Conners can finally be Roseanne.’

That is just one of the many raves the show received from critics.

‘All four actors – the core quartet, if you will – deliver sensational performances, in both the premiere and in the fourth episode (which was also screened for us), writes Michael Ausiello in his review for TV Line.

‘Gilbert and [Lecy] Goranson, in particular, have never seemed more connected to their alter egos, resulting in their best-ever work in these roles.’

Ausiello was also quick to give credit to the writers of episodes one and four.

‘They struck what felt like the perfect balance between darkness and light, while also being respectful – almost reverential at times – to the character of Roseanne,’ states Ausiello. 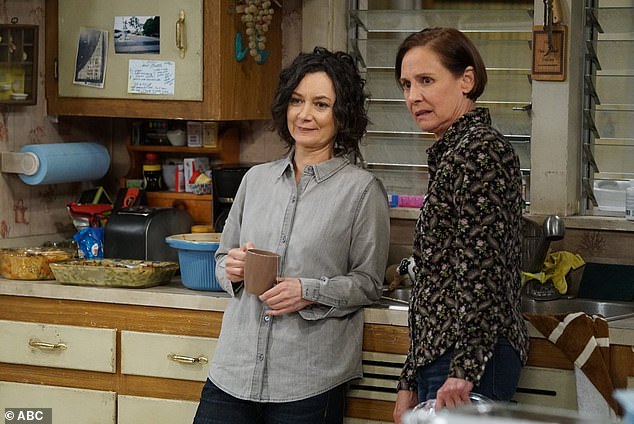 Hit: ‘Darlene isn’t Roseanne, but with Barr off the show, The Conners can finally be Roseanne,’ reads one review (Sara Gilbert and Laurie Metcalf above) 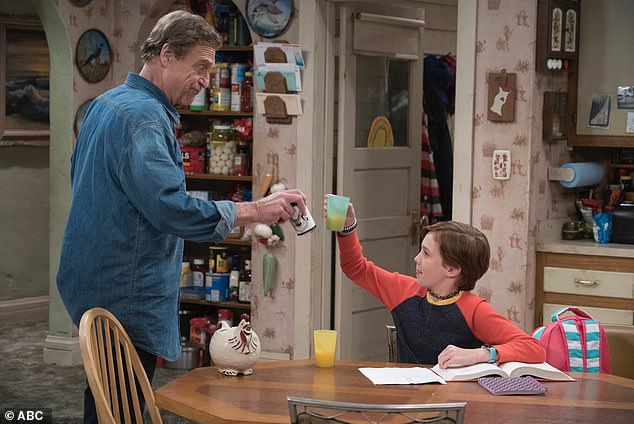 Cheers: The performances from Sara Gilbert, Lecy Goranson and especially Laurie Metcalf and John Goodman (above) are being praised by critics

Daniel Fienberg got a little more specific about what works in the new season in his review for The Hollywood Reporter.

‘If anything, I think [Laurie] Metcalf seems more comfortable returning to Jackie’s skin this time around and my only two laughs in the premiere came from her attempts to redecorate the Conner kitchen in predictably obsessive ways,’ he writes in his glowing review.

‘Goodman, capable of elevating the smallest grunt or eye-roll, had some of his best moments with McNamara’s Mark last season and that’s the case in these early episodes, as well.’

He then notes: ‘And I continue to wish more people used this show’s return as a chance to reflect on how generally great Gilbert is.’

He also points out that there is still much to enjoy in this Barr-less reboot.

‘And if you’re an angry Barr fan who vowed not to watch again after how ABC treated her last season? Well, my review wasn’t going to convince you to come back anyway.’

Entertainment Weekly seems to sum up the feelings of the critics who had reviewed the film as of Sunday in their write-up, which states:’ The Conners is an above-average family comedy with a strong cast and sharply-drawn characters that could very well exist for several seasons on their own — if, of course, the audience is able to let go of the past.’

Couple transform their four bed suburban semi into a medieval CASTLE
Couples who laugh together stay together, scientists discover
Northern Ireland Secretary says she is 'profoundly sorry'
Man, 74, fighting for his life after he was shot with a crossbow while trying to fix satellite dish
Two British teachers are locked up in a hellhole jail in Oman
High streets set for £62m boost to transform derelict historic buildings into new retail outlets
Britain sees its hottest ever late August bank holiday
Will Ferrell sports long hair as he films scenes for upcoming Eurovision film with Rachel McAdams