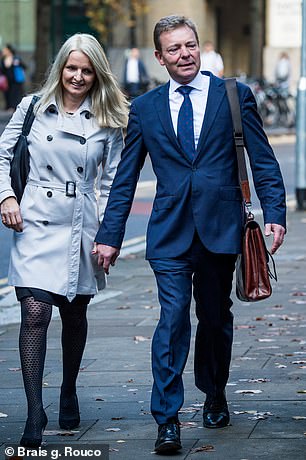 His election agent, Nathan Gray, who is also on trial, feared a ‘real prospect of a legal challenge’ from the Ukip leader regarding an overspend, the jury was told.

But Southwark Crown Court heard they avoided problems by illegally failing to declare more than £8,000 in salaries for several campaigners, including co-defendant Marion Little.

The South Thanet MP, 52, Gray, 29, and party activist Little, 63, are alleged to have been complicit in submitting false expenditure declarations.

The campaign chairman, Tony Salter, sent an email to Gray on February 18, which stated: ‘We’re getting perilously close to hitting our legal limits, both for the long and short campaign.

‘I take on board your concerns that we face the real prospect of a legal challenge from Farage if you make the smallest slip up.’

Little was said to have taken on ‘hour by hour’ oversight of the campaign, but her pay was instead declared as national expenditure, the court heard.

Mr Jafferjee said her salary showed she received £965.30 during her brief part in Mackinlay’s ‘long campaign’ and £5,091 during the entire ‘short campaign’.

But none was declared on Mackinlay’s campaign expenses, the court heard.

The prosecutor said a member of the Conservative Christian Fellowship, David Taylor, also worked on Mackinlay’s campaign from April 7 until May 7.

His pay during that period was £2,085 – but this was also not declared.

Mr Jafferjee said: ‘What was he doing? He was plainly working for and securing Craig Mackinlay’s success.’

Mr Taylor posed for photographs alongside Mackinlay and senior MPs including Damian Green, which were later shared on Mackinlay’s Twitter profile, the jury heard. 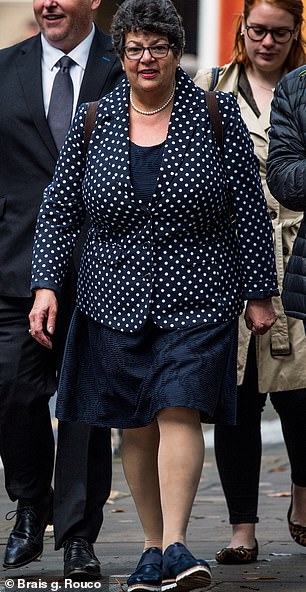 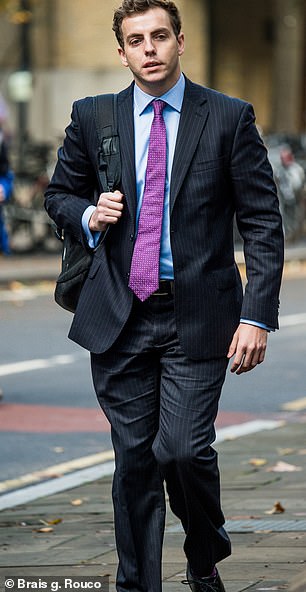 Marion Little (left) and Nathan Gray (right) are also accused of taking part in the alleged plot to win South Thanet in a race against Nigel Farage. Both are pictured arriving at court today

The prosecutor said: ‘As far as he was concerned, he was there promoting Craig Mackinlay. On a regular basis the Craig Mackinlay team provided a diary of events and activities.’

He added: ‘Apart from Nathan Gray, the election agent, no salaries are declared.’

The salary of a press officer who allegedly worked on Mackinlay’s campaign, Henry Macrory, was also not declared.

But he allegedly sent an email in April which said he was ‘working full time for our candidate in South Thanet’.

Accommodation expenses for visiting campaigners which totalled ‘several thousands of pounds’ were also not declared, the court heard.

Earlier, jurors heard the Conservative Party put extra resources into the campaign to win the Kent seat because, prior to the EU referendum, Ukip’s support was on the rise.

‘Nigel Farage indicated he would step down as Ukip leader if he failed to win South Thanet, so it was clear this was not going to be any ordinary election campaign,’ prosecutor Aftab Jafferjee QC told jurors.

He said the election became a ‘two-horse race’ won by Mackinlay with a majority of around 2,800 in an electorate of 70,000.

The court heard Gray described the victory in an email to Little as a ‘truly magnificent election campaign’.

Mr Jafferjee said expenditure is ‘tightly regulated’ over two stages – a short and a long campaign – and includes the costs involved to get the candidate elected.

This includes printing leaflets, putting up posters and staff costs, such as the employment of Gray as an election agent, he explained.

‘Each of these three defendants were complicit in advancing those false declarations.’ 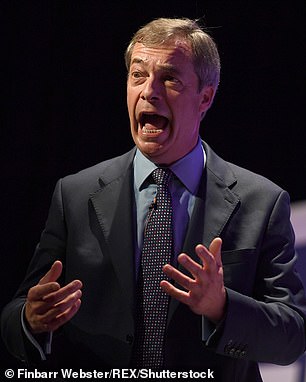 He told jurors a signature purporting to be Nathan Gray’s in relation to the long return had been ‘forged’.

Mackinlay, from Ramsgate, Kent, denies two charges of making a false election expenses declaration under the Representation of the People Act 1983.

‘Each of these three defendants were complicit in advancing those false declarations.’

He told jurors a signature purporting to be Nathan Gray’s in relation to the long return had been ‘forged’.

Mackinlay, from Ramsgate, Kent, denies two charges of making a false election expenses declaration under the Representation of the People Act 1983.

Gray, of Hawkhurst, Kent, denies one charge of making a false election expenses declaration and a further charge of using a false instrument under the Forgery and Counterfeiting Act 1981.

Little, of Ware, Hertfordshire, denies three counts of intentionally encouraging or assisting an offence under the Serious Crime Act 2007.

The court heard Little, along with a press officer, was sent from Conservative Campaign Headquarters (CCHQ) to stay in the Royal Harbour Hotel in Ramsgate, arriving on March 23, 2015.

The prosecutor told jurors they worked to get Mackinlay elected ‘from the moment they arrived’.

‘Marion Little went on to effectively manage Craig Mackinlay’s election campaign so that he would be elected and Nigel Farage would be defeated,’ he said.

Fixed elections are split into a ‘short campaign’ and a ‘long campaign’.

Mackinlay is alleged to have submitted false expense returns for both.

But prosecutors say the declarations were false and that Nathan Gray allowed somebody to forge his signature on the long return.

‘It was the campaign that could see off Nigel Farage’s Parliamentary ambitions forever.’

Little wrote an email in which she described herself as being ‘marooned’ in South Thanet and Mr Jafferjee said: ‘While we accept she may have been doing some things nationally, she was there for one purpose.

‘Marion Little went onto effectively manage Craig Mackinlay’s election campaign so that he would be elected and Nigel Farage would be defeated.’

The court heard Little told police she was not working for Mackinlay but carrying out national campaign work.

She now claims she went to Kent to prevent the election of Ukip and the benefit to Mackinlay was ‘collateral’ to that, jurors were told.

The prosecutor said Mackinlay will blame his ‘lack of experience and unawareness’ of what Little and others were doing.

Gray’s defence will similarly highlight his inexperience, stating he was ‘marginalised’ by the arrival of Little, and that he has ‘no idea’ how his forged signature came about, the court heard.

But Mr Jafferjee said: ‘It is the prosecution case each of these defendants involved themselves in a deliberate under-declaration and non-declaration of election expenses.’

Mackinlay originally entered politics in 1992, standing as an MP for the Anti-Federalist League – a precursor to UKIP.

In July 1997 the party’s then leader Alan Sked stepped down, nominating Mackinlay to be his successor.

But he failed to get the top job after Mr Farage backed Michael Holmes to be the next leader.

In 2005, Mackinlay defected to the Conservatives and became a councillor for Medway Council in 2007.

Each one of the defendants is on unconditional bail. The trial, which is expected to last until December, continues.

Courtney Hadwin fails to win America's Got Talent after missing out on top five during season finale
Unprovoked assault in elevator captured on CCTV as police chase suspect over the attack
Emily Blunt shows off her stylish flair as she heads to Q&A for Mary Poppins Returns in New York
Woman who was sent home by doctors with antibiotics is 'diagnosed with ovarian CANCER’
I couldn't let Paul have his cake and eat it: Alex Hollywood finally called time on her marriage
Dozens of parents and children protest outside second Birmingham primary school
Trump warns America to brace for a 'lot of deaths' in the coming week as US virus cases pass 310,000
Lout, 28, admits to outraging public decency after urinating near memorial to PC Keith Palmer