President snapped at CBS News’ Lesley Stahl after she read him a list of North Korean leader ‘s atrocities and asked him how he could love someone who’s done such things.

‘I’m not a baby. I know all these things,’ Trump told her before going on to explain the two men get along well.

Stahl interviewed Trump for CBS’ ’60 Minutes,’ which will air on Sunday night. She questioned him on a number of topics including missing Saudi Arabian journalist Jamal Khashoggi and turnover in his Cabinet. 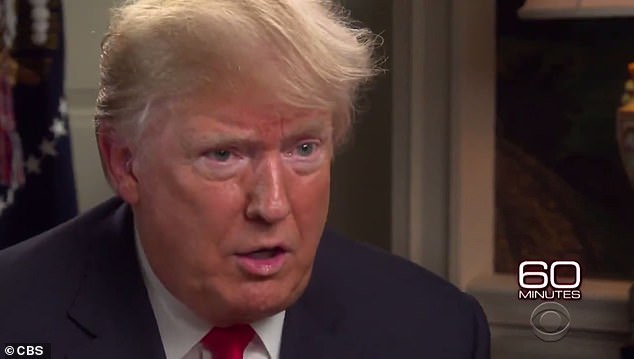 President Trump said he and Kim Jong-Un have ‘good chemistry’ 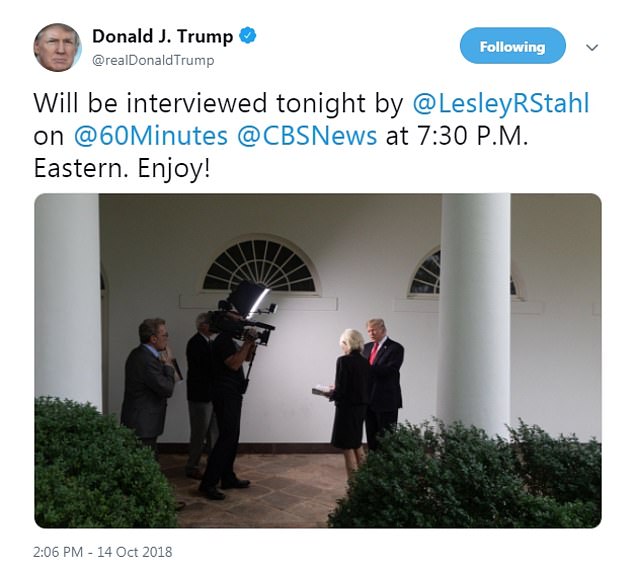 He touted his interview with CBS News, which airs Sunday night

In a clip released Sunday afternoon, she asked him about his relationship with Kim and confronted the president with Kim’s human rights record.

‘I trust him. That doesn’t mean I can’t be proven wrong,’ Trump told her.

Stahl proceeded to read to him what she called Kim’s ‘resume’: ‘He presides over a cruel kingdom of repression, gulags, starvation. Reports that he had his half-brother assassinated. Slave labor. Public executions. This is a guy you love?’

‘Sure. I know all these things. I’m not a baby. I know these things,’ Trump replied. ‘I get along with him okay.’

Stahl then questioned Trump’s comments that he made at a September campaign rally where he said he ‘fell in love’ with Kim, who sent him ‘beautiful letters.’

‘You said you love him,’ she said to the president.

Trump defended his comment as a ‘figure of speech.’

‘Let it be an embrace. Let it be whatever it is to get the job done,’ Trump replied.

The president also claimed the United States was on the brink of war with North Korea when came into office.

‘The day before I came in, we were goin’ to war with North Korea. I sat with President Obama,’ he said.

Stahl interrupted him to ask: ‘We were goin’ to war?’

‘I think it was going to end up in war. And my impression is – and even in my first few months, I mean, that rhetoric was as tough as it could possibly get,’ he said.

‘Will be interviewed tonight by @LesleyRStahl on @60Minutes @CBSNews at 7:30 P.M. Eastern. Enjoy!,’ he wrote Sunday.

Trump previously has said he’d like a second sit-down with Kim, whom he first met in Singapore in July.

“I trust him. That doesn’t mean I can’t be proven wrong,” President Trump says of his relationship with North Korea’s Kim Jong Un. “I get along with him really well.” See the president’s full interview with Lesley Stahl tonight at 7:30 ET/7 PT. 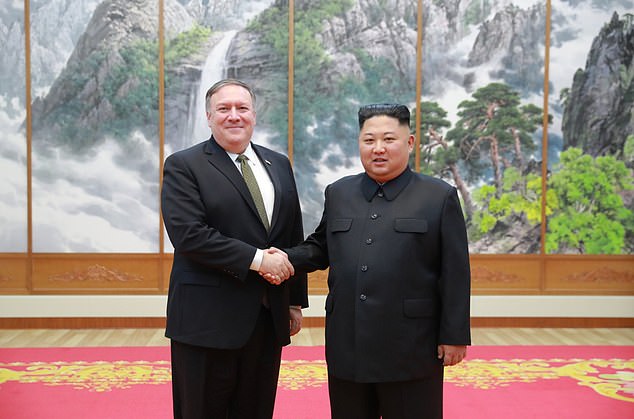 Secretary of State Mike Pompeo was in Pyongyang earlier this month to work on details with Kim.

After that meeting, Kim agreed to allow international inspectors to examine the country’s nuclear testing site.

Pompeo also said he is ‘close’ to setting the date for a second meeting between the two men.

Since Trump and Kim met in Singapore, relations between their nations have stalled and questions have emerged about the accord they signed, which had no timetable and no measurable factors to show North Korea was denuclearizing.

Trump canceled Pompeo’s planned trip to Pyongyang in August, citing little evidence that North Korea had followed through on any of its commitment to denuclearize.

But at the U.N. General Assembly meeting in New York at the end of September, Trump indicated things were back on track.

‘We have many things in store,’ Trump said at the time, noting he had gotten a second letter from Kim requesting a meeting.