A Kentucky mother says her autistic 11-year-old son suffered cuts and bruises after being dragged by two staffers at his middle school school, as seen in newly released surveillance video.

According to Jo Grayson, an author and autism advocate from Lexington, her son Thatcher, who is non-verbal and suffering from epilepsy, celiac disease and a condition affecting his joints, had a tantrum at Tates Creek Middle School on the afternoon of September 14.

Speaking to , Grayson said Thatcher refused to get up off the gym floor, so a teacher and a school nurse proceeded to drag him down a hallway. 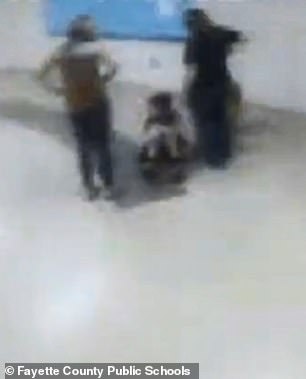 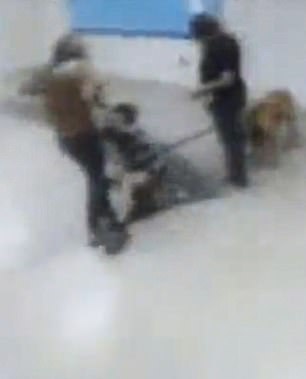 Newly released surveillance video from Tates Creek Middle School in Kentucky shows a teacher and a nurse dragging Thatcher Grayson, 11, across the floor on September 14 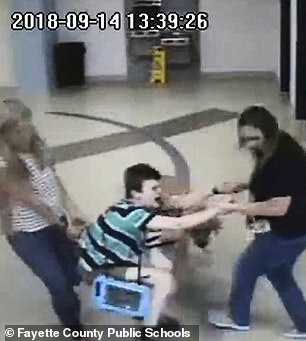 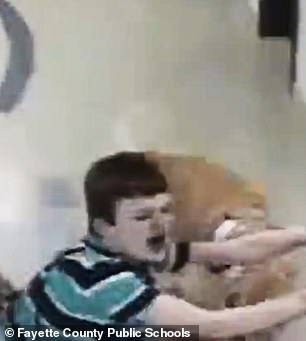 Thatcher is autistic and non-verbal, and also suffers from several other medical conditions. His mother was told he had a meltdown and refused to get up 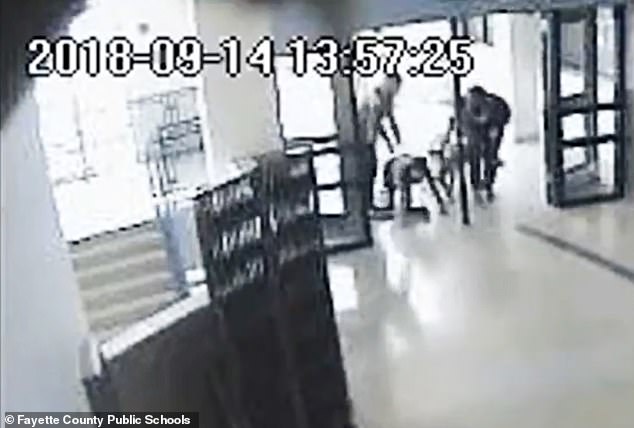 Surveillance video released this week by the Fayette County School System in response to freedom of information request shows Thatcher sitting on the floor, with two female staffers standing over him. The footage has no audio.

About 30 seconds into the recording, one of the women grabs Thatcher by the arms and tries to bring him to his feet, but ends up dragging him on his buttocks across the floor.

Thatcher’s service dog, a golden retriever named Saul, follows the 11-year-old as the teacher and the nurse struggle to get him off the floor.

A few minutes later, the child gets down on all fours next to his dog, at which point one of the staffers grabs his arms and drags him on his stomach.

The final portion of the video shows the student again sitting on his buttocks on the floor and being pulled towards a classroom, with Saul at his side

Grayson said Thatcher’s teacher sent her a message that day saying her son had a meltdown and had to be picked up off the gymnasium floor, but she did not reveal that it entailed dragging the child. 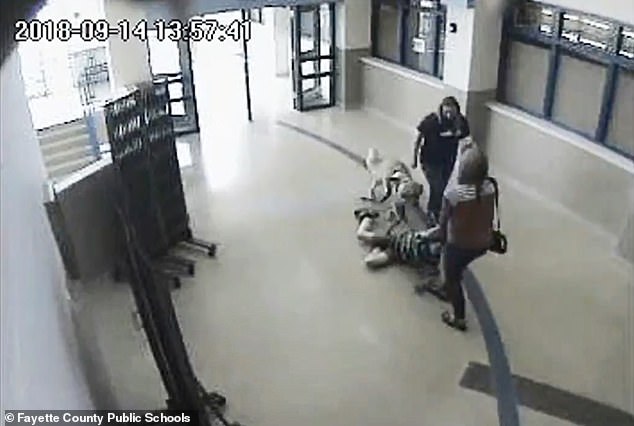 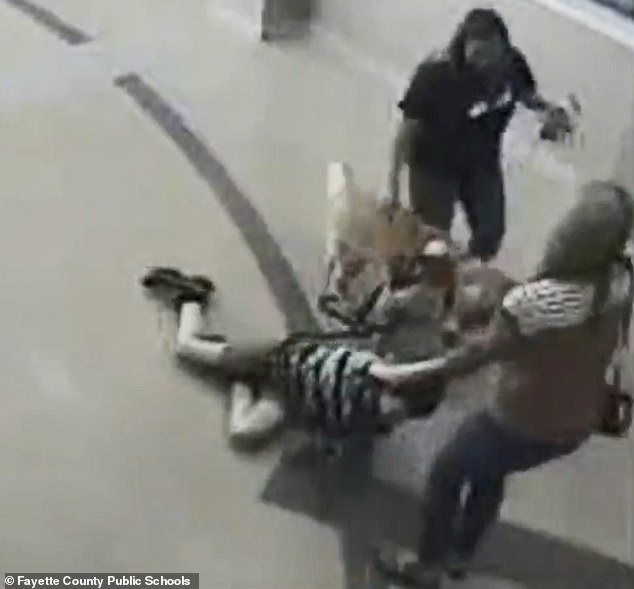 ‘How could somebody who works with a person with disabilities lose their cool like that and just be, you know, not thinking about how this is going to not only physically hurt a child but psychologically hurt them as well?’ Grayson told WKYT.

According to the married mother-of-one, it was not until she saw the injuries on her son’s torso that evening that she learned what really happened.

The Fayette County School System released a statement saying the incident was being investigated.

‘We are committed to ensuring the safety and well-being of our students and take any and all reports of this nature seriously,’ the statement read in part. 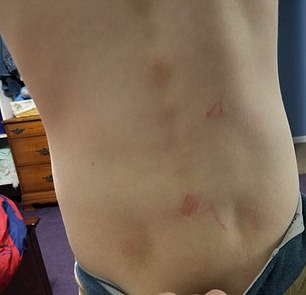 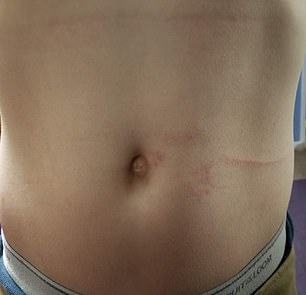 Earlier this month, the boy’s mother shared these photos on her blog showing her son’s torso marked with scrapes and bruises from the dragging incident 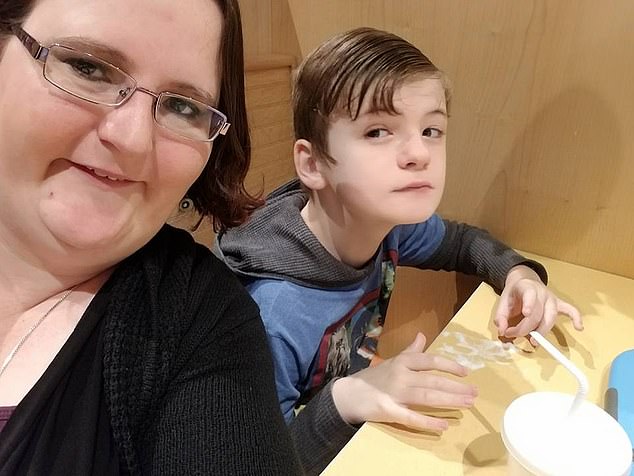 Mrs Grayson, who is an author (left), said her special-needs son had been hurt at school before 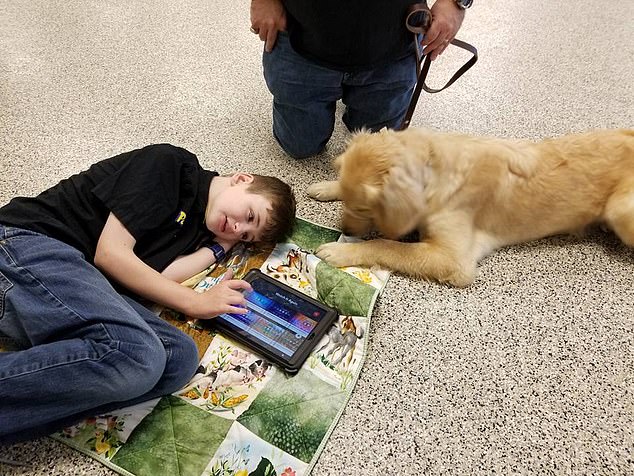 The Lexington-Fayette County Health Department said that the school nurse seen in the CCTV video has been placed on paid leave pending the outcome of the probe.

On her personal , Grayson wrote on October 3 that the teacher who took part in dragging her son across the floor had been fired.

‘My son could have been unharmed if the teacher had had better training in what to do in such an instance as this,’ the mom wrote. ‘Let me also note again that this is not the first time my child has been hurt at school in the school district he is in. It is just the first time at this school.’

Cynthia Nixon prepares to go face-to-face with Gov Andrew Cuomo
'Horrible series of decisions' led to man running naked down road after allegedly being kidnapped
Shalyha Ahmad is found safe and says she was never missing
Support for 'mosque tax' in Germany to make Islamic institutions less dependent on foreign funding
Only child born and raised inside Chernobyl exclusion zone is now a healthy student, aged 19
Utah company is ordered to pay $1million to child workers from polygamous sect
Joe Biden sent note to Stanford rape victim saying 'I see you'
NY's daily death toll falls to 594 prompting Cuomo to suggest the state is already at it's apex