Millie Mackintosh got to relive her wedding day to husband Hugo Taylor all over again, as she slipped back into her bridal gown on Saturday.

The former star, 29, took to with a sweet snap of herself and her grandparents and revealed it was the first time they had seen her in her dress.

She explained that her grandparents – who have been married for 66 years themselves – were forced to skip her nuptials in July due to ill health. 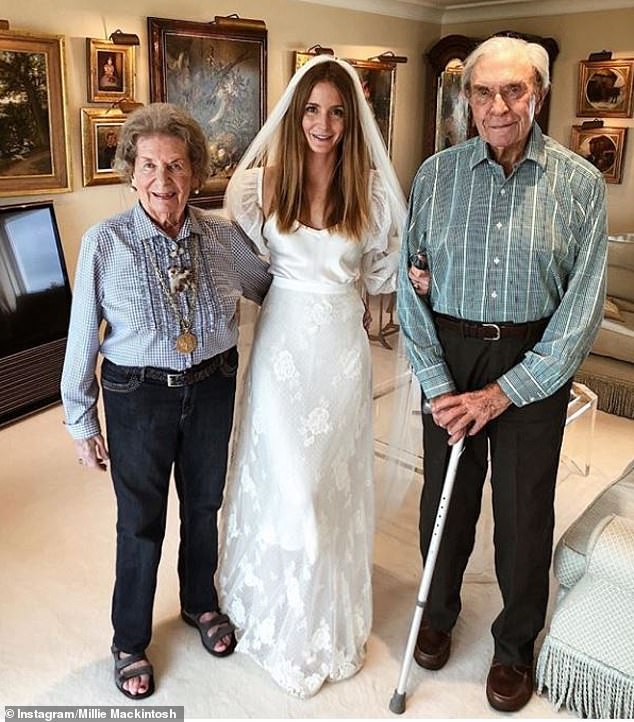 Blushing bride once more? Millie Mackintosh got to relive her wedding day to husband Hugo Taylor all over again, as she slipped back into her bridal gown on Saturday

While they couldn’t be there for Millie’s wedding, the reality star turned designer brought her big day to them as she slipped back into her Kate Halfpenny gown to give her grandparents their very own private viewing.

The beauty couldn’t hide her delight as she stepped back into the elegant design that came complete with a lace full skirt and ruched sheer sleeves.

Cuddling up to her grandparents, Millie was pictured sporting her wedding veil along with her gown. She penned alongside her post: ‘Today was such a happy day! I finally got to show my grandparents my wedding dress as they couldn’t make it on the day due to bad health.

‘They have been married for 66 years and still going strong.’ 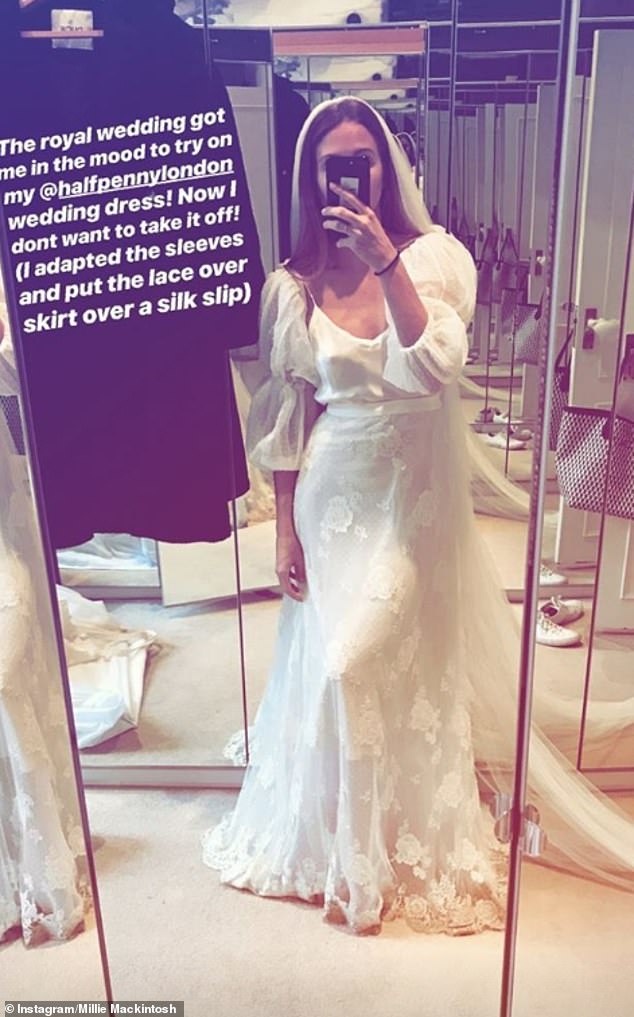 Wedding fever: Inspired by Princess Eugenie’s nuptials, the star, 29, took to Instagram with a sweet snap of herself and her grandparents and revealed it was the first time they had seen her in her dress

Millie’s bridal post came after Princess Eugenie married husband Jack Brooksbank at St George’s Chapel at Windsor Castle in Friday – where many members of the Royal family and a slew of celebrities, including Millie’s former MIC co-star Oliver Proudlock attending.

Inspired by the Royal wedding, Millie told fans watching Princess Eugenie wed had ‘got her in the mood’ to try on her own bridal gown. She explained she had ‘adapted the sleeves’ in her photo and thrown the lace over skirt of her dress over a silk slip.

Millie wed Hugo at his uncle’s country estate Whithurst Park over the summer. The couple opted for a religious blessing as they had married formally at Chelsea’s Old Town Hall in London three days prior to the celebration.

The couple favoured a ‘rock n roll’ themed nuptials, which saw their tables named after nightclubs – an ode to their wild younger years on the London party circuit – and guests served a fried chicken breakfast, as Hugo gushed about his ‘angel’ bride in his wedding speech. 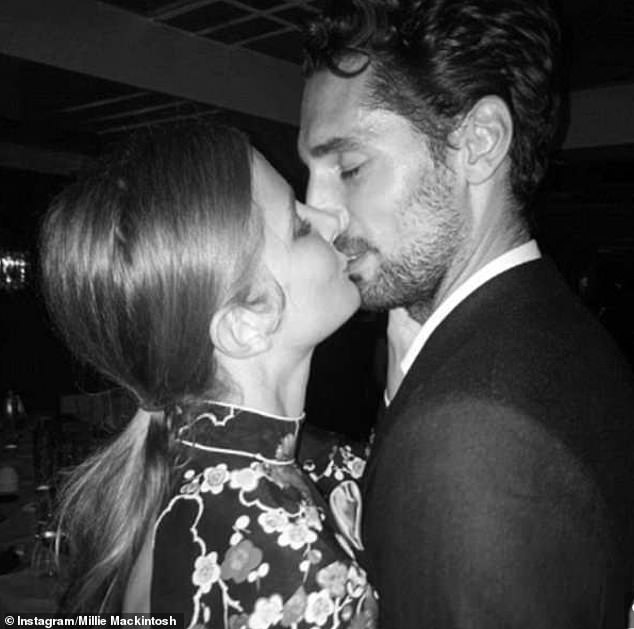 I do! Millie wed Hugo at his uncle’s country estate Whithurst Park in July – they opted for a royal blessing after marrying formally at Chelsea’s Old Town Hall in London three days prior

Millie and Hugo dated in 2011 while on Made In Chelsea, but split up when it emerged he had cheated on Millie with her friend Rosie Fortescue, who attended the wedding alongside a bevy of their other co-stars.

They reunited in the second half of 2016 and Taylor proposed during a holiday in Mykonos, Greece, in July last year. She was previously married to musician Professor Green, real name Stephen Manderson, in September 2013.

The couple announced their split in February 2016 after two-and-a-half years of marriage and finalised their divorce in May 2016 – the same week that Millie went public with Hugo during a trip to Monaco.

Guests in attendance at her wedding to Hugo including Spencer Matthews, who acted as Hugo’s best man and attended with his wife Vogue – their first wedding after tying the knot themselves. 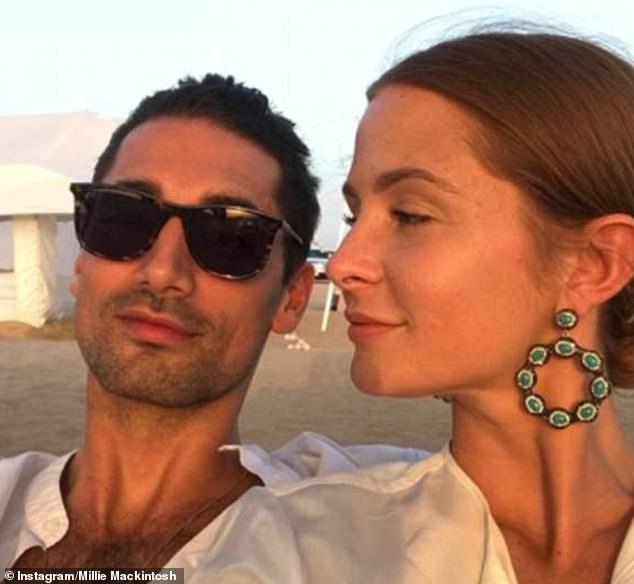 Details: The couple favoured a ‘rock n roll’ themed nuptials, which saw their tables named after nightclubs – an ode to their wild younger years on the London party circuit

Millie and Hugo treated fans to an inside look of their big day in an all-access-areas shoot with Hello! magazine. Enamoured newlywed Millie revealed that she was accompanied down the aisle by the family’s pug, Mabel, as she said: ‘ It wouldn’t be right to get married without Mabel. She’s one of the family’.

Talking about his bride, Hugo told Hello!: ‘I knew she was The One within about five minutes of us getting back together.’

Millie concurred: ‘But if we’d stayed together when we were younger, we wouldn’t be together now. We had to go away, do our separate things and grow as people. We needed that time apart.’

Speaking of the big day, Millie said: ‘The whole day has felt like an out-of-body experience. Even in my wildest dreams I didn’t imagine it would be this perfect. I am so excited to finally be married to Hugo – he’s the love of my life.’ 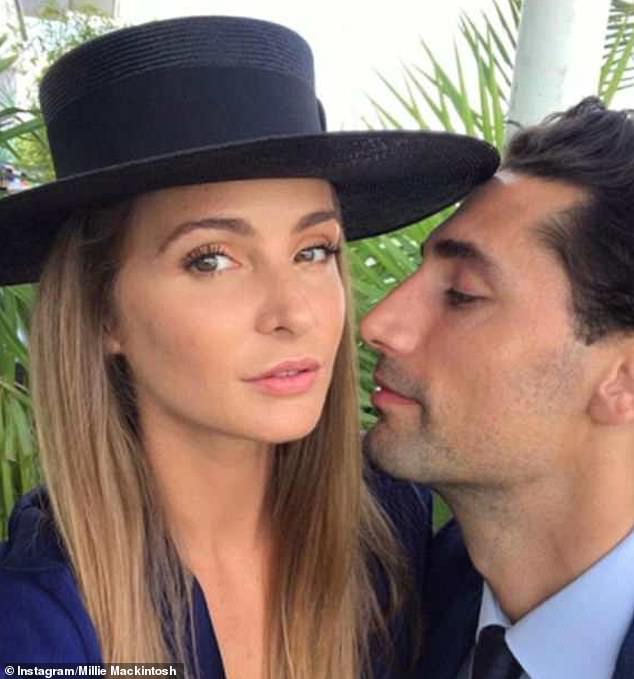 Happy ever after: Millie and Hugo first dated in 2011 and rekindled their romance in 2016, following Millie’s divorce from ex-husband Professor Green

GMB's Susanna Reid has been 'dating Crystal Palace chairman Steve Parish for two months'
Ferne McCann admits 'nasty trolls on social media can be so hurtful'
Lily Collins looks chic in bright blue coat and quirky shades as she touches down in Los Angeles
TOWIE's Shelby Tribble reveals she felt like she was in Megan McKenna's 'shadow'
Luke Perry's will left 'everything to his two children'
Susanna Reid yells 'I am NOT your wife' at Piers Morgan in a row about a desk bin
Halle Berry, 52, shows off sculpted arms thanks to daily workouts
Victoria Justice and Jon Hamm shine in the fashion department at amfAR charity poker event in SF