Verdict: Out of this world

First Man, the captivating story of how, in the famous summer of ’69, astronaut Neil Armstrong came to make that ‘one small step’ into the history books, was given the honour of opening the Venice Film Festival a few weeks ago.

I reviewed it more briefly then, and was interested afterwards to read some of the numerous online comments. Predictably, the conspiracy theorists had their say, those who adhere to the delusion that the moon landings were a gigantic hoax, mocked up in a TV studio.

On Twitter, in a reference to the film director said by some to have masterminded the whole devious episode, I was asked: ‘Who plays Stanley Kubrick?’ 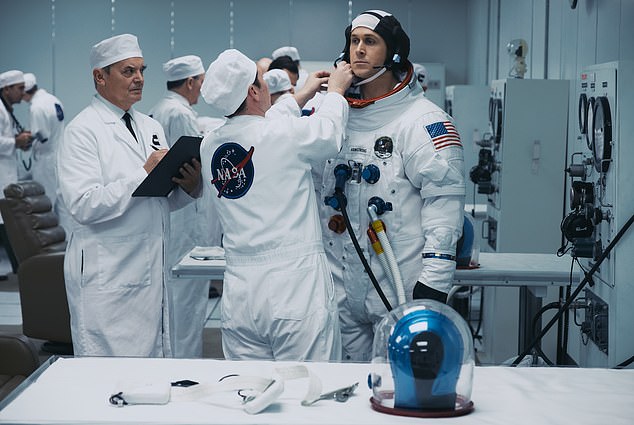 First Man, the captivating story of how, in the famous summer of ’69, astronaut Neil Armstrong came to make that ‘one small step’ into the history books

More surprisingly, a number of other readers pointed to Armstrong’s foibles as a man. Some suggested that he was boring, introverted, difficult, and thus an unworthy subject for a biopic.

Well, one of the many great triumphs of Damien Chazelle’s wonderful movie, and Ryan Gosling’s perfectly judged lead performance, is that it actually makes virtues of Armstrong’s moodiness and introspection. But Chazelle overcomes an even greater challenge. After all, everyone knows how this story ends. Few quotations have a greater claim to immortality than ‘one small step for man, one giant leap for mankind’.

So it is marvellous to report that First Man, based on an acclaimed 2005 biography, actually unfolds as a captivating and suspenseful thriller, which is given a powerful whoosh of added poignancy by the story of Armstrong’s family life. Early in his career, he and his wife Janet (superbly played by Claire Foy) lost a two-year-old daughter, Karen, to a brain tumour.

It is that personal tragedy, at least according to Chazelle and screenwriter Josh Singer, which accounts for a great deal of Armstrong’s emotional constipation, and indeed for one of First Man’s most poignant moments. 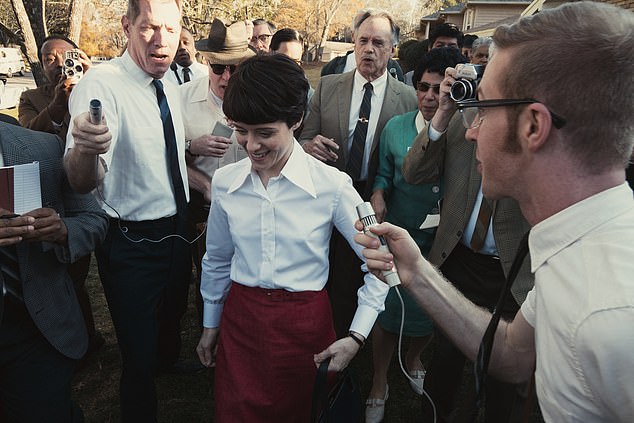 First Man, based on an acclaimed 2005 biography, actually unfolds as a captivating and suspenseful thriller, which is given a powerful whoosh of added poignancy by the story of Armstrong’s family life

The executive producer, I might add, is one Steven Spielberg, who never knowingly endorses a one-tissue moment when he can get us reaching for the full pack of triple-ply Kleenex. But here the sentimentality is kept in check.

Nonetheless, it is a hugely moving film. And in what is essentially an account of a remarkable, epoch-making triumph, death looms terribly large. Not just that of Karen, but also of several of Armstrong’s fellow pilots and astronauts.

Had three of them not perished in a fire while preparing for a mission in 1967 — a disaster counterpointed with Armstrong’s visit to the White House to convince dissenting politicians that the expense of the space programme was worthwhile — he probably wouldn’t have been the first man on the moon.

Some families paid a catastrophic price for victory in the so-called space race against the Soviet Union. The film does not gloss over these calamities. On the contrary, it uses them repeatedly to inform the characters not only of Armstrong, but also his spiky, insensitive colleague Buzz Aldrin (Corey Stoll).

The former mourns his friends deeply, but can rationalise their deaths with a simple, almost callous, observation: ‘We need to fail down here so we don’t fail up there.’

Gosling perfectly captures the way in which Armstrong’s emotions are as tightly bottled as his oxygen supply.

There is a brilliant scene, on the eve of the Apollo 11 expedition, in which Janet forces him to sit down with his two young sons, to tell them he might not come home.

But this extraordinarily brave and resourceful man shirks the challenge. It’s not rocket science, which is precisely the problem. He addresses his boys as he would a press conference.

By then, the film has followed a careful chronological path through the Sixties.

It sketches the political backdrop, touching not just on the opposition in Congress to the extravagant cost of building rockets, but also on civil rights activists complaining about muddled priorities, not least in Gil Scott-Heron’s powerful song, Whitey On The Moon.

The main focus, however, is on the major steps in Armstrong’s Nasa career. He has some narrow escapes of his own and nobody sums up the experimental, at times almost rudimentary nature of the U.S. space programme more starkly than his wife Janet.

‘You’re a bunch of boys making models out of balsa wood,’ she rages at Armstrong’s boss, Deke Slayton (Kyle Chandler).

Foy, so wonderful as the Queen in the Netflix series The Crown, is no less fine in the role of consort here. It is very much a supporting part, but still, I’ll wager, the stuff of award nominations.

Besides, she gets to share many of the film’s best moments, as when she tells her son that his dad is going to the moon.

‘OK,’ he replies, nonchalantly. ‘Can I go outside?’

Chazelle makes much of the contrast between terrestrial domesticity and Armstrong’s adventures in space, cutting repeatedly between the two, until he gets to the film’s crowning moment, the July 1969 moon landing itself.

It is painstakingly reconstructed, beautifully and movingly imagining what really went on behind the grainy TV footage we all know so well.

Incidentally, the director has been roundly criticised in the U.S. for downplaying the ceremonial planting of the Stars and Stripes on the surface of the moon.

Certainly, there is no patriotic grandstanding, no jingoistic speechifying, in this movie, which would surely have been very different in the hands of the man originally slated to direct, Clint Eastwood. That is another of the reasons I commend it to you.

It’s a fabulous picture, one that will surely propel its director, still only 33 but already with the smash hit La La Land and the awards-festooned Whiplash to his name, into the Hollywood stratosphere.

Living it up at the Hotel Tarantino

Writer-director  Drew Goddard rather flaunts his admiration for Quentin Tarantino in this violent but stylish thriller, set in the late Sixties.

Even the title, one assumes, is a cheeky homage to the classic ‘cheeseburger’ conversation between John Travolta’s Vincent and Samuel L. Jackson as Jules in Tarantino’s Pulp Fiction.

The El Royale here is a seedy hotel, bang on the state line between California and Nevada. 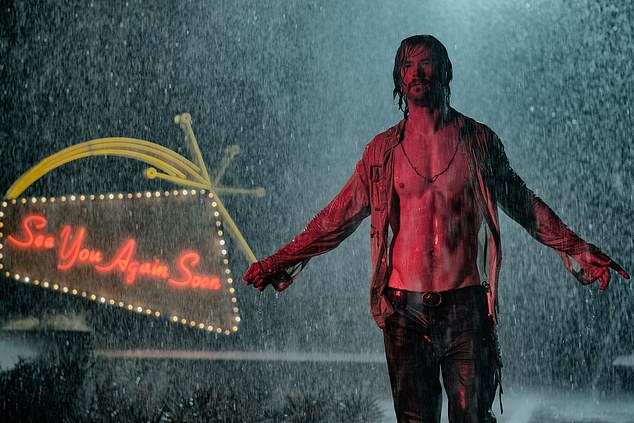 Writer-director Drew Goddard rather flaunts his admiration for Quentin Tarantino in this violent but stylish thriller, set in the late Sixties

One stormy night — and here Goddard might have been thinking more of Tarantino’s The Hateful Eight — a disparate bunch of strangers check in, all with very different secrets and agendas.

It’s impossible to tell you too much about them without giving the game away, but it’s certainly a juicy cast, with Jeff Bridges on top form as a Catholic priest, Jon Hamm as a travelling salesman, and Dakota Johnson as a defiant young woman with attitude.

Towards the end, Chris Hemsworth joins the fray as a Charles Manson-type character.

But stealing scenes from all these better-known names is British actress and singer Cynthia Erivo, who coincidentally also popped up this week in the London Film Festival’s opener, Widows.At two hours and 20 minutes, Bad Times At The El Royale might also give you a bladder-testing time in el stalls, but there’s a cracking soul and R&B soundtrack by way of compensation — most of it provided by Erivo’s character, a Motown-type singer down on her luck.

The film’s other major character is the hotel’s eager-to-please manager, indeed only member of staff, played by Lewis Pullman. Like just about everyone else he has something to hide, and for quite a while it feels as if the film, too, is hiding something from us.

That can get frustrating; why invest your interest in a picture with so many concealed twists and turns? But Goddard begins to show his hand with the help of some slick, Pulp Fiction-style flashbacks and narrative ellipses.

Ultimately, I felt as though I’d had rather a good time at el picturehouse.

This yeti won’t harm a sole

The pleasing premise of this animated children’s film has a TV crew looking for the elusive yeti, while at the same time an adventurous yeti called Migo (voiced by Channing Tatum) searches for the legendary, possibly mythical creature he knows only as ‘Smallfoot’ — the human being.

That central gag might be lost on younger members of the audience, but they’ll enjoy the evidence of human existence that the yeti community gathers, including a toilet roll, which they call ‘the scroll of invisible wisdom’.

Older children, but possibly not their parents, might also enjoy Migo’s subversive decision to defy the community elders and search for the Smallfoot. The yetis live according to strict rules inscribed on a set of sacred stones, but Migo has the nous to challenge authority.

I could have done without the forgettable songs — a transparent attempt to do a Frozen — but on the whole this isn’t a bad bet for what seems likely, for many of us, to be a wet and windy weekend.