Rebecca Humphries has hinted that she’s set to compete on Strictly, after liking a post which suggested she should replace her cheating ex Seann Walsh.

The 32-year-old actress liked a tweet which read: ‘Erm, @BBCOne, can we boot Sean off #strictly and replace him with @Beckshumps? Literally everyone wants this.’

She also liked another which read: ‘Rebecca is one of the nicest and most talented people out there, in 100 years Sean will be a dead url at the bottom of her lengthy Wikipedia.’ 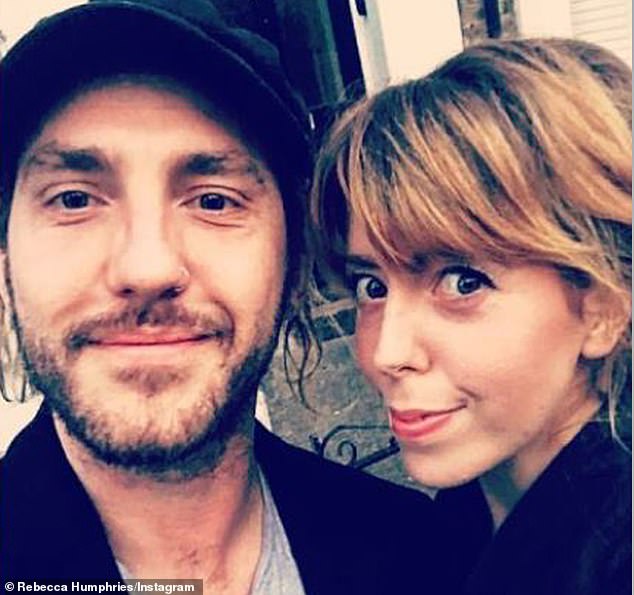 Now that would be interesting: Rebecca Humphries has hinted that she’s set to compete on Strictly as she liked a series of tweets calling for love rat ex Seann Walsh (left) to QUIT the show

Another said: ‘So can we all through @Beckshumps a proper birthday party?’ referring to him kissing married Katya Jones on Rebecca’s birthday.’

Rebecca has also liked tweets which accused her ex boyfriend Seann Walsh of ‘passing the blame’ during a public apology for kissing his dance partner.

The Strictly star appeared on ‘s It Takes Two alongside the professional dancer he was caught kissing on his girlfriend’s birthday, Katya Jones, on Wednesday evening.

That’s an idea: Rebecca liked a series of tweets including one which said she should replace her ex on Strictly

During the appearance Rebecca took to  to ‘like’ posts by viewers who demanded that he still needed to apologise to his ex girlfriend, rather than insisting he was being ‘wrongly portrayed’.

Viewers were quick to call out Seann’s apparent lack of remorse towards his ex,  saying that he decided to defend himself rather than take ownership of his actions.

Rebecca, who dated Seann for five years, has yet to respond directly but has shown appreciation for several tweets slamming her ex-boyfriend, with one of the comments saying: ‘He’s a d***’. 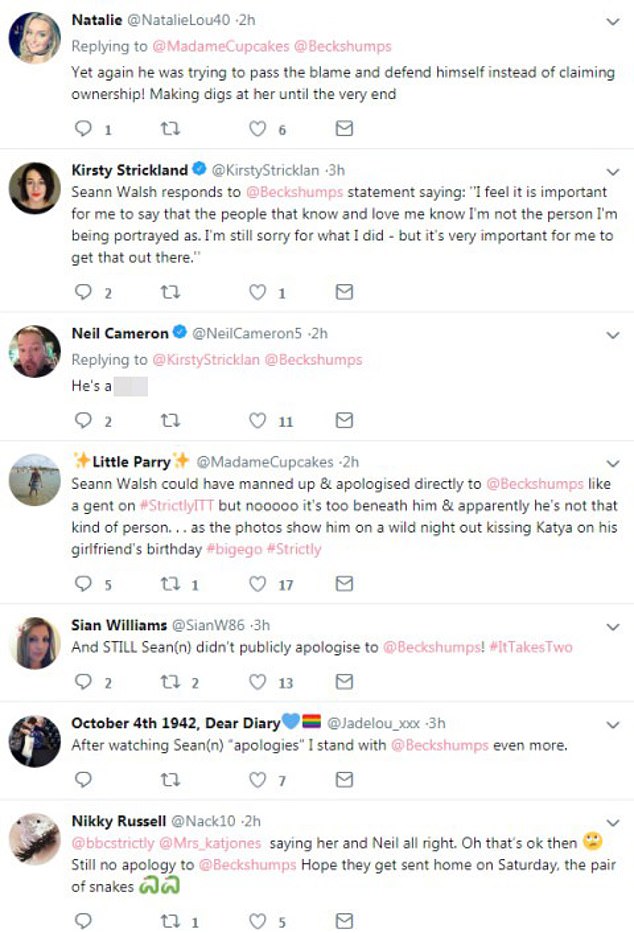 Reaction: During the appearance Rebecca took to Twitter to ‘like’ posts by viewers who insisted that he still needed to apologise to his ex girlfriend

One fan said: ‘After watching Sean(n) ‘apologise’ I stand with @Beckshumps even more.’

Another added: ‘Seann Walsh could have manned up & apologised directly to @Beckshumps like a gent on #Strictly ITT but nooo it’s too beneath him & apparently  he’s not that kind of person… as the photos show him on a wild night out kissing Katya on his girlfriend’s birthday #bigego #strictly.’ 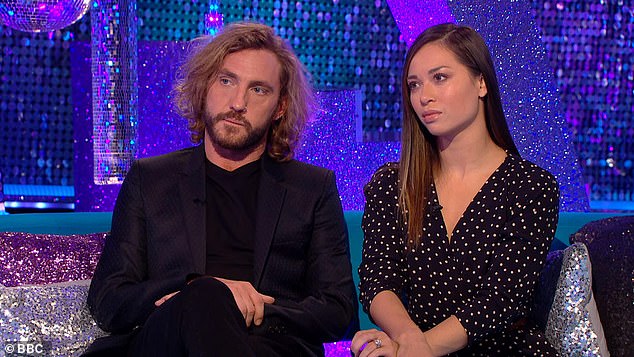 Seann Walsh and Katya Jones pictured together on Strictly: It Takes Two on Wednesday evening where they both apologised again after their kiss 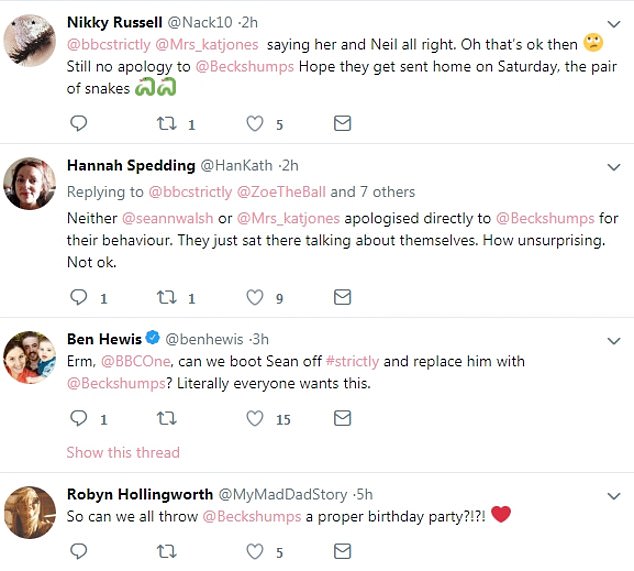 ‘Still no apology’: Viewers were quick to call out Seann’s apparent lack of remorse towards his ex, as he decided to defend himself rather than take ownership of his actions, they said

A third viewer wasn’t at all surprised by the lack of apology, writing: ‘Neither @seannwalsh or @Mrs_katjones apologised directly to @Beckshumps for their behaviour. They just sat there talking about themselves. How unsurprising. Not ok.’

The comedian turned on his ex-girlfriend and claimed he has been wrongly portrayed after she dumped him on Twitter over his kiss with Katya during the interview.

Seann and Katya have been at the centre of a week-long scandal after they were caught sharing a passionate kiss last week.

Speaking tonight Seann said he was ‘not the person I’m being portrayed as’ by his ex-girlfriend who ended their relationship in a lengthy statement online saying he had called her ‘psycho’ when she suspected him of cheating. 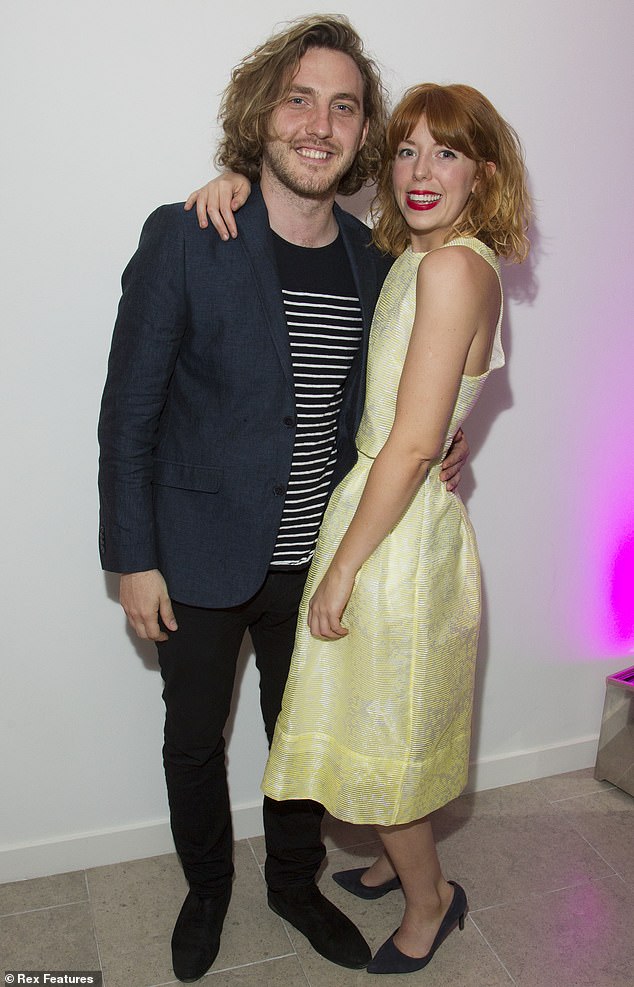 Backlash: Rebecca, who dated Seann for five years, has yet to respond directly but has shown appreciation for several tweets slamming her ex-boyfriend, with one of the comments saying: ‘He’s a d***’

Katya apologised to ‘everyone it hurt and involved’ on tonight’s programme but said she and her husband Neil were ‘absolutely fine’.

Earlier on Wednesday the duo were seen rehearsing their Charleston in pictures shared by the  Instagram feed.

The pair have reportedly been told to tone down the sexiness of their routine amid the scandal, which saw Katya – who is married to Neil Jones – and Seann – who was dating Humphries – sharing a kiss.

He said: ‘I think that, obviously I’m sorry for the hurt that I’ve caused.

‘We were getting on well, we were having fun. We had a couple of drinks and made a huge mistake and I regret it deeply.’

Responding to his ex-girlfriend Rebecca remarks on Twitter, he said: ‘I made a mistake, which I’m very sorry for – sorry for the hurt that I’ve caused. 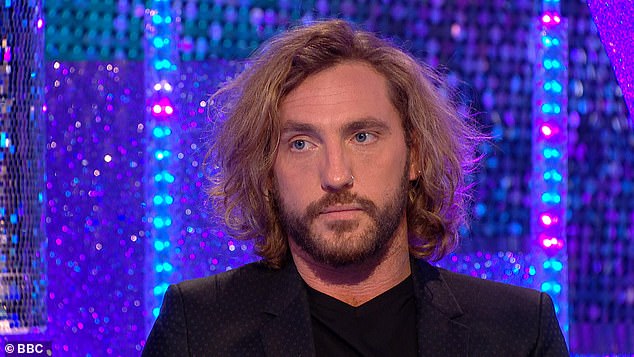 On the BBC programme Walsh (pictured) said ‘you never think about the extent of the damage that you’re going to do, in a moment of, you know the mistake that you’ve made’

‘You never think about the extent of the damage that you’re going to do, in a moment of, you know the mistake that you’ve made.

‘I’m not perfect, far from it. Our relationship wasn’t perfect. That doesn’t mean I wanted it to end the way it finally did, and I’m very sorry for that.

Katya Jones said: ‘Obviously I apologise, and I can’t apologise enough to everyone who it hurt and involved.

‘But, the main thing, me and Neil are absolutely fine and that’s what matters to me the most right now and focusing on my job and doing it as professionally I can.’ 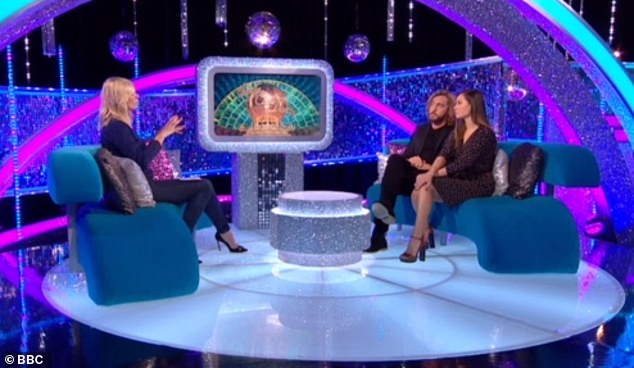 Walsh and Jones, who have been at the centre of a week-long row after they were caught sharing a passionate kiss last week, appeared together on BBC’s It Takes Two programme 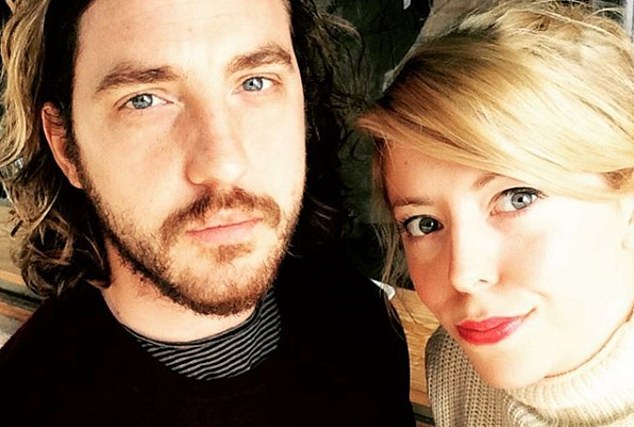 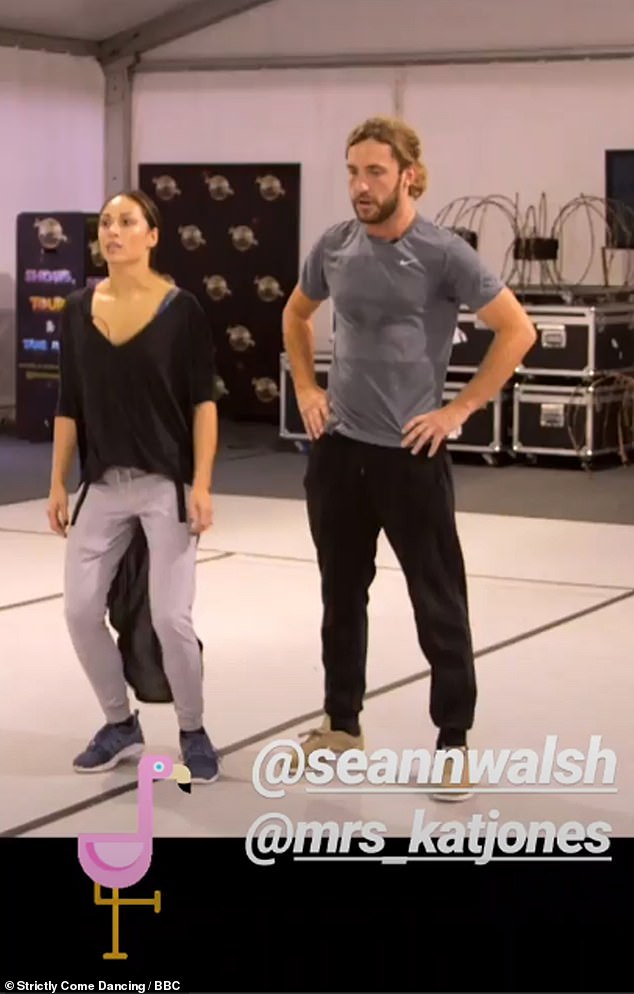 Rehearsals: Seann Walsh and Katya Jones have been pictured together for the first time since they apologised for kissing in a ‘one-off drunken mistake’

In a lengthy statement shared across social media on Monday evening Humphries confirmed she has ended their five-year relationship following the emergence of the damning pictures – despite Walsh and Jones both issuing public apologies.

She said: ‘Those pictures were taken on October 3rd. It was my birthday. I was alone at home when Sean texted at 10pm saying the two of them were going for one innocent drink.

‘We spoke and I told him, not for the first time, that his actions over the past three weeks had led me to believe something inappropriate was going on. 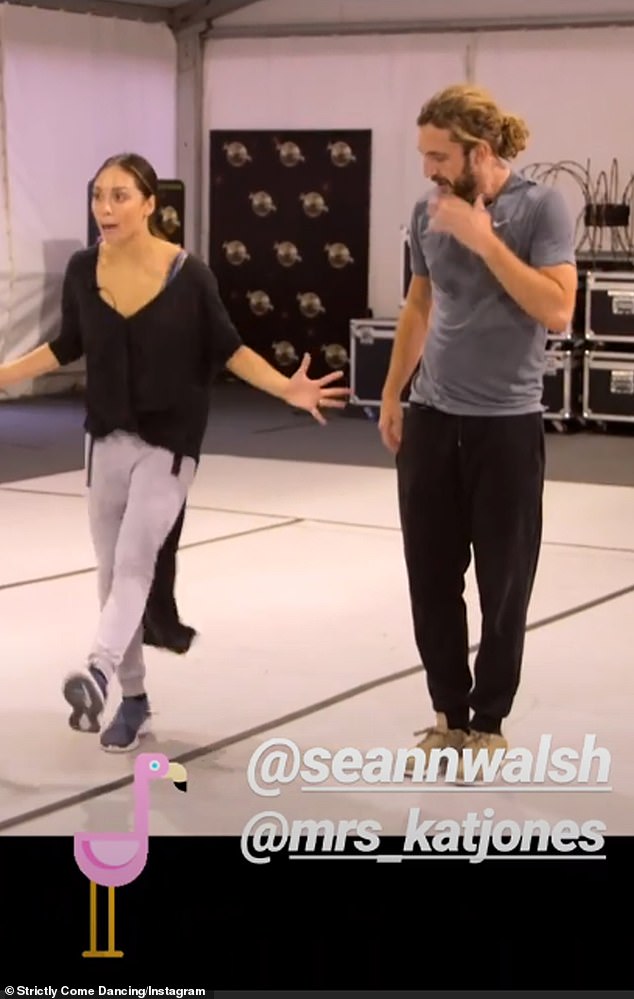 Taking to the dancefloor: In pictures shared by the Strictly Come Dancing Instagram feed on Wednesday, the duo were seen rehearsing their Charleston 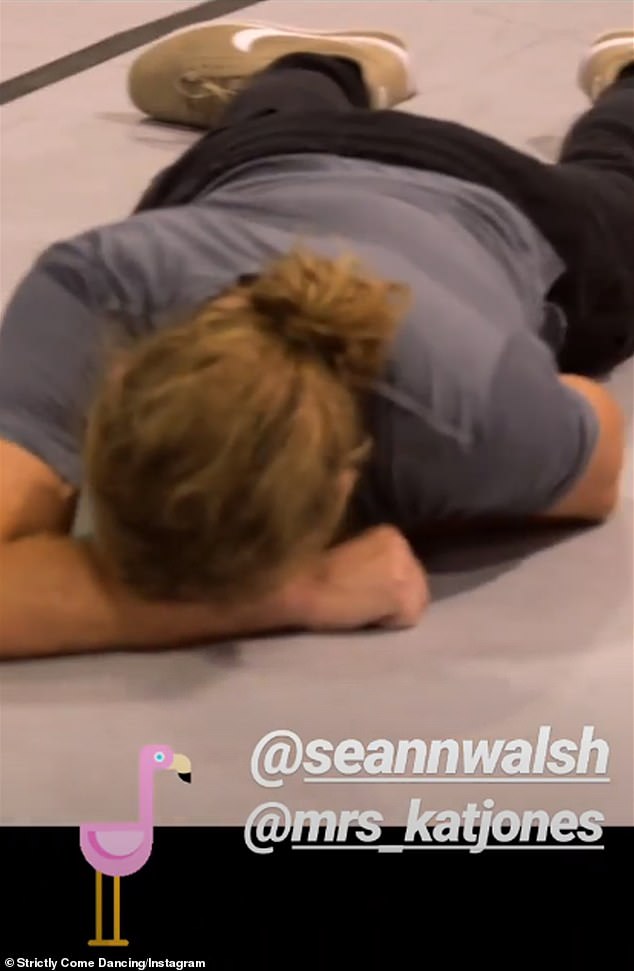 Too much? Proving to work up a sweat, comedian Seann, 32, appeared exhausted as he performed a series of dance moves, before crashing on the studio floor

‘He aggressively, and repeatedly, called me a psycho/nuts/mental. As he has done countless times throughout our relationship when I’ve questioned his inappropriate, hurtful behaviour.

‘But – this whole business has served to remind me that I am a strong, capable person who is now free; and no victim.

‘I have a voice and will use it by saying this to any woman out there who deep down feels worthless and trapped with a man they love: Believe in yourself and your instincts.

‘It’s more than lying. It’s controlling. Tell some very close friends who, if they’re anything like my wonderful network, will swoop in and take care of the logistics and of you.’ 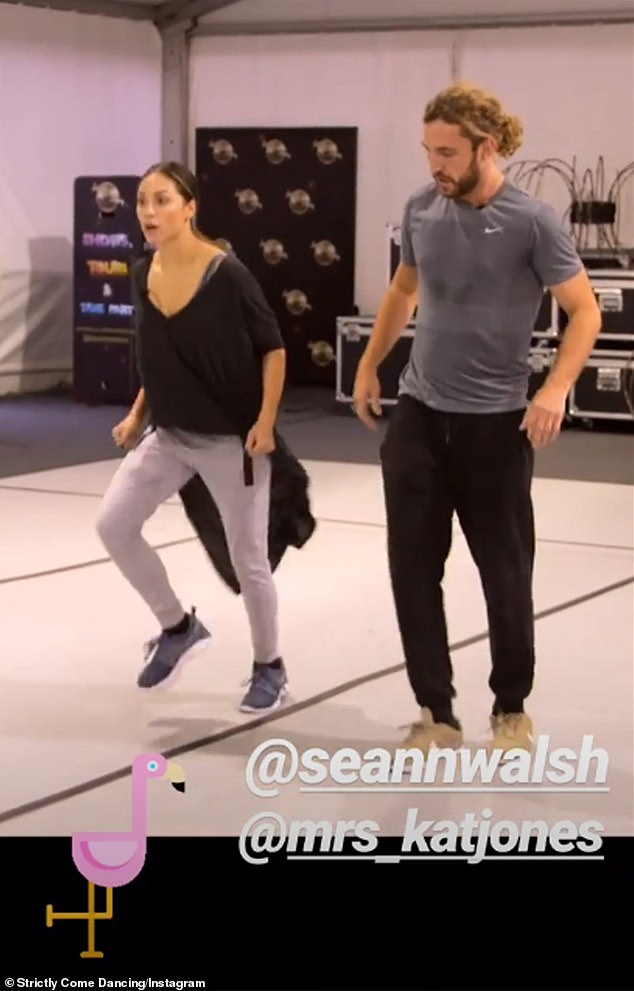 Comfy: Russian pro Katya, 29, kept casual as she sported a baggy dipped hem top, tied in with a pair of grey joggers and box-fresh trainers