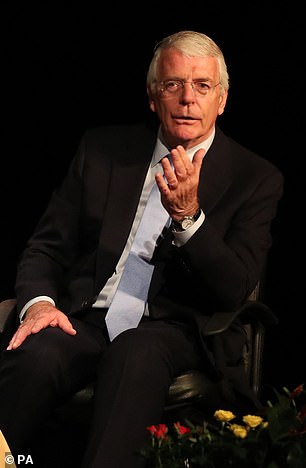 Sir John Major has said the Government should rethink its national roll-out of Universal Credit warning it could be unpopular as the poll tax which sparked riots.

The former prime minister said last night that most Britons will think current plans are unfair because some families could end up hundreds of pounds worse off each month.

The Tory grandee said that failing to protect people who could lose out as a result of the welfare reforms would trigger ‘the sort of problems that the Conservative Party ran into with the poll tax’.

Sir John told the that Universal Credit was ‘impeccable’ and ‘entirely logical’ in theory, but called for its implementation to be reconsidered.

‘I don’t oppose the principle of Universal Credit, I think there is a real danger it will be introduced too soon and in the wrong circumstances,’ he said.

‘So I do think we need to look very carefully at how it is introduced.’

The poll tax riots in March 1990 erupted after a peaceful march by 70,000 protesters in London broke down into violent disorder.

The march was in opposition to the Community Charge, dubbed the poll tax, which later became council tax.

The riots contributed to the downfall of Margaret Thatcher, who resigned as prime minister in November 1990. 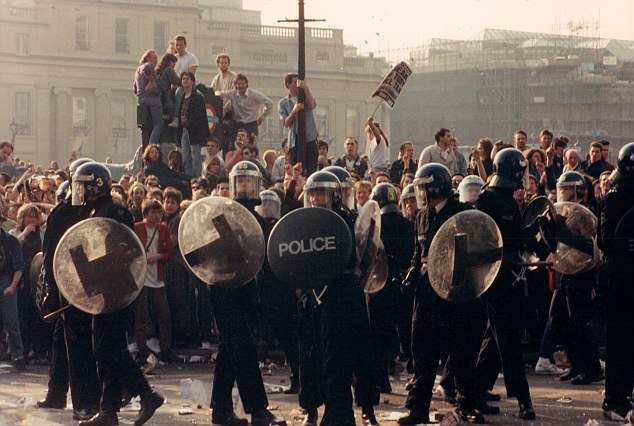 The former prime minister and chancellor branded the flagship welfare reforms a ‘harmful and hated’ experiment that will risk public disorder.

It is designed to make the welfare system less complicated and ensure no-one faces a situation where they would be better off claiming benefits than working.

But according to reports, millions of families could be left up to £200-a-month worse off when the new system is introduced in July.

In a speech at the University of Edinburgh, in memory of the late Motor Neurone Disease campaigner Gordon Aikman, Mr Brown said Universal Credit would remove £3billion from the social security budget on top of cuts to child tax credits and benefit, which he helped introduce.

He said: ‘For the first time that any of us can remember, the safety net is not now the welfare state but charity and the lifeline for families in need is not social security but food banks.

‘In my own home town food bank demand has doubled in just a year because of Universal Credit and the benefit changes around it as family after family is pushed into poverty.’

He warned that child poverty is rising ‘inexorably’ and is expected to hit five million in 2022.

‘A return to poll tax-style chaos in a summer of discontent lies ahead,’ he added.

‘So I am calling today for the Government to abandon the 2019 national roll out of Universal Credit and end this harsh, harmful and hated experiment.’

Downing Street has dismissed Mr Brown’s criticism. A source said: ‘I’m not sure that the Prime Minister is going to take any lessons from Gordon Brown on this particular issue.

‘Under his system of tax credits, not only… did some people have unclaimed benefits because the system was too complicated, you also had a situation where MPs were recipients of benefits.

‘It was clearly a system that doesn’t work and we think Universal Credit is better.’

Chris Hemsworth 'selfishly' asked his family NOT to visit him on set
Former AFL Colin Sylvia dies in a car accident
I'm A Celebrity stars quaff champagne before flying business-class back to the U.K
Why males with beards and long hair have the smallest testicles
Five million Britons - one in ten of the country - now own second homes worth a total of £1trillion
Tearful Bond actress is stunned to learn her 'repugnant' relative managed a sugar plantation...
Tourists offered the chance to explore the 35,000ft-deep Mariana Trench with Eyos Expeditions
Zoom buys security service in bid to address safety concerns and introduce end-to-end encryption