President defended his decision on Wednesday to leave the White House and stage a campaign rally in Pennsylvania even as the Panhandle was being decimated by Hurricane Michael.

‘This was set up a long time ago,’ Trump said of the rally in Erie.

‘We had thousands of people lined up from yesterday. They were lined up for 24 hours.

‘If I didn’t go, they would also criticize. If I didn’t go that would have been the wrong thing, too,’ the president told Fox News late Wednesday. 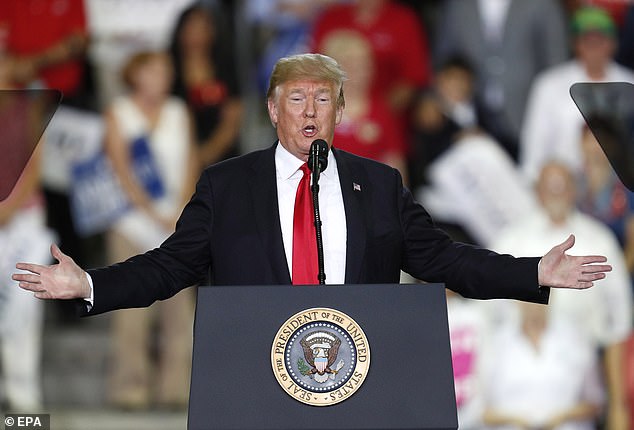 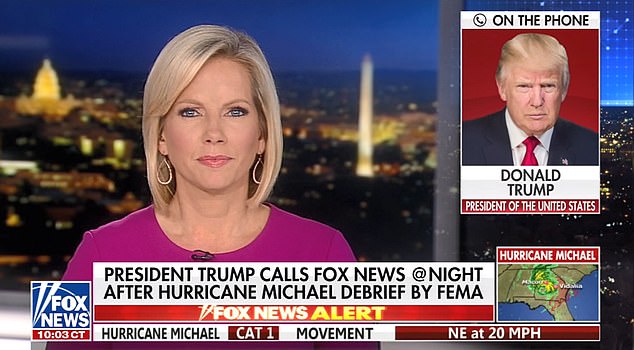 After the rally, the president phoned in to Fox News and was interviewed on the air by host Shannon Bream

The decision to go to the rally stands in sharp contrast to Trump’s criticism of then-President Barack Obama.

In 2012, a week after Hurricane Sandy hit the New York area, Obama appeared at a campaign rally alongside Jay-Z and Bruce Springsteen in Ohio on the eve of the presidential election.

Trump said that he he ‘had everything set up on Air Force One’ so that he was in contact with the governors of Florida, Alabama, and Georgia.

Hurricane Michael, the fiercest storm to hit Florida in a quarter century, was downgraded to a Category 1 hurricane, the U.S. National Hurricane Center said on Wednesday, adding it is expected to weaken further to a tropical storm by Thursday morning as it crosses the southeastern United States.

Michael is moving across southwestern Georgia with damaging winds across the central and eastern Panhandle of Florida as well as southwestern and south-central Georgia, with storm flooding still occurring along the Gulf Coast, the NHC said.

Michael, located about 20 miles southwest of Albany, Georgia and packing maximum sustained winds of 90 miles per hour, is forecast to become post-tropical cyclone on Friday, the Miami-based weather forecaster said.

At least one man has been killed after a tree crashed through the roof of his Greenboro home and trapped him.

Emergency crews were heading to the home, but downed power lines and blocked roads were making the trip difficult. 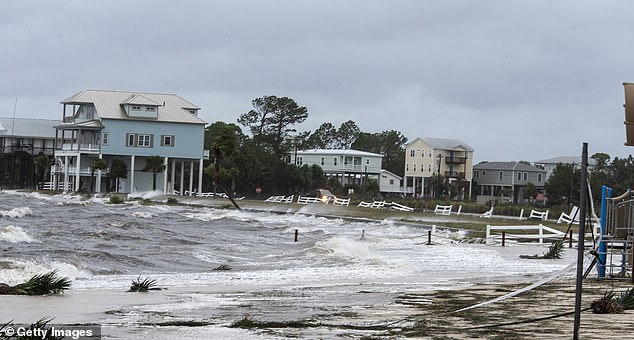 Hurricane Michael, the fiercest storm to hit Florida in a quarter century, was downgraded to a Category 1 hurricane, the U.S. National Hurricane Center said on Wednesday. The hurricane made landfall in Crawfordville, Florida (above) on Wednesday

As Hurricane Michael pounded Florida on Wednesday, Trump took shelter at the campaign event, where he sought to boost Republicans before the midterms.

Trump acknowledged the hurricane at the top of his rally in Erie, offering his ‘thoughts and prayers’ to those in the storm’s path and promising to ‘spare no effort’ in the response.

He promised to travel to Florida ‘very shortly.’

Then Trump turned back to politics.

His Pennsylvania rally was the latest stop on an all-out midterms blitz.

With weeks to go before the November elections, Trump and his fellow Republicans have been invigorated by the successful nomination of Justice Brett Kavanaugh to the Supreme Court and are seeking to use the contentious moment to unify the GOP and stave off Democratic energy at the polls.

That Trump kept his appointment in Erie underscored the importance of this effort to Republicans.

Earlier in the day, Trump received a hurricane briefing at the White House on the Category 4 storm.

He told reporters he faced a ‘quagmire’ about whether to attend the Pennsylvania rally because ‘thousands of people’ were already lined up for the event. 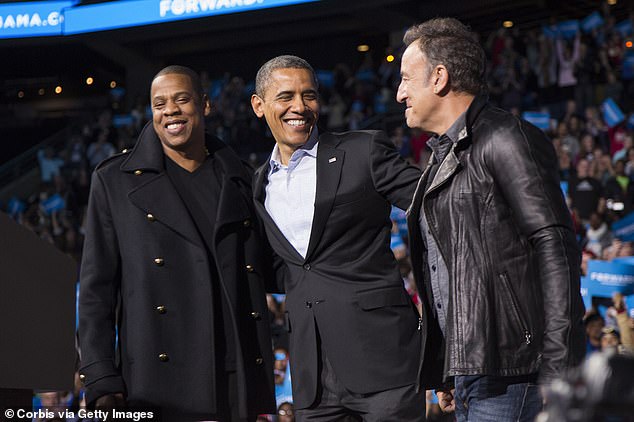 The decision to go to the rally stands in sharp contrast to Trump’s criticism of then-President Barack Obama (center). In 2012, a week after Hurricane Sandy hit the New York area, Obama appeared at a campaign rally alongside Jay-Z (left) and Bruce Springsteen (right) in Ohio

Kelly is facing a challenge from Democrat Ron DiNicola, while Barletta is mounting an uphill campaign to unseat two-term Democratic Sen. Bob Casey.

The president, who attended a fundraiser before the rally, also praised GOP gubernatorial candidate Scott Wagner.

After his comments about the hurricane, Trump pivoted to the midterms, celebrating Kavanaugh’s appointment despite Democratic opposition and sexual misconduct allegations against him.

Trump called it a ‘historic week,’ saying, ‘What the radical Democrats did to Brett Kavanaugh and his beautiful family is a national disgrace.’

For weeks Trump has been escalating his attacks on Democrats.

He continued that effort Wednesday, claiming that Democrats want to ‘impose socialism and take over and destroy American health care.’

He added: ‘Democrats want to abolish America’s borders and allow drugs and gangs to pour into our country.’

Trump also returned to one of his favorite themes – reliving his stunning 2016 victory.

‘Was that the most exciting evening?’ he said to cheers.

Trump also ticked through what he sees as his top achievements, including tax cuts and a new trade deal with Canada and Mexico.

He talked about exiting the Iran nuclear deal and drew wild applause for mentioning his plans for a Space Force.

He also accused Casey, named for his politician father, for ‘banking on the name of his father.’

Trump’s own father, Fred, was a successful real estate developer who set his son up in business.

The New York Times recently reported that Donald Trump received at least $413 million from his father over the decades, much of that through dubious tax dodges, including outright fraud.