An anarchist group run by the man who heckled Jacob Rees-Mogg and his children outside is causing further controversy by threatening ‘manspreaders’ on the Tube.

Anarchist campaign group and newspaper Class War, founded by Ian Bone in 1983, has angered commuters by putting up ‘No manspreading’ signs inside train carriages and around stations.

The signs read: ‘Oi big b*******! No manspreading on public transport. Or the Class War Women’s Death Brigade will get you.’

The clip showed him shouting at the politician and his six children: ‘Your daddy is a very horrible person’ and ‘lots of people hate your daddy’. 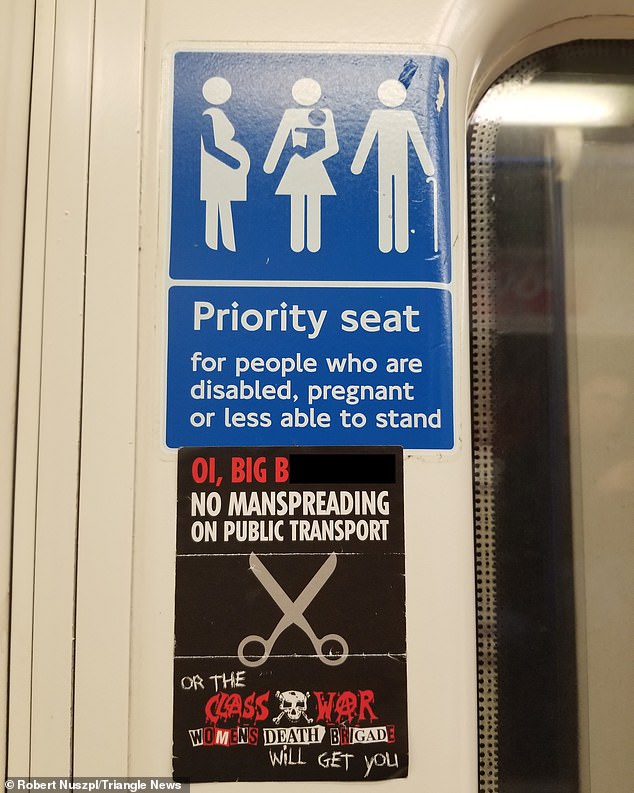 Signs have appeared on the London Underground this week threatening men who spread their legs on the Tube. The posters, put up by anarchist group class war, have sparked outrage 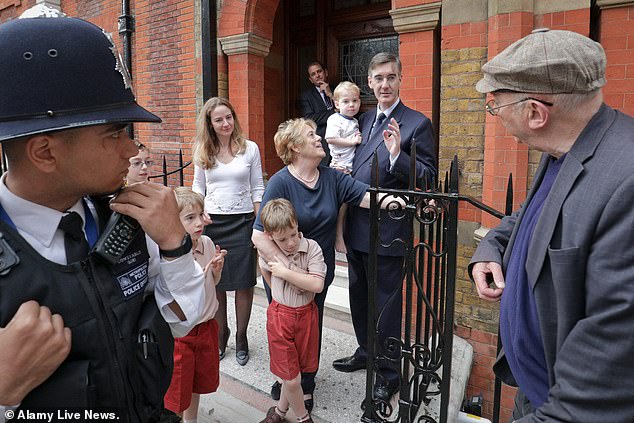 This week London Underground passengers have been outraged by the new Class War campaign against men who spread their legs on trains.

One commuter Neil Brook said they had gone too far, commenting on Facebook: ‘Had enough of this feminism b*******, if I want to man spread I frigging will.’ 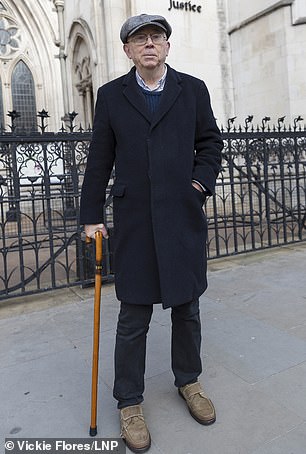 Ian Bone founded Class War in 1983. He is pictured outside the Royal Courts of Justice in London in February this year

Kelly Scott added that men are not the only culprits: ‘I am 8 months pregnant and am doing some serious ‘man spreading’ of my own!’

Nico Morton added: ‘I just really want to know why, when there are starving kids and stabbing every other day, people are so preoccupied with the way men sit??

‘Maybe if we pooled together on an important issue something might actually change. Let the b****** fly free, let’s feed the poor instead ****’

Simon May wrote: ‘It’s this sort of thing that puts people off left wing politics. Poverty, fgm, cuts left right and centre, crime up……. No let’s get frothy about how someone sits on a f****** train.’

Christopher John Hooley said: ‘Wait are women telling men what to do with their bodies! Isn’t that a double negative as they scream about men doing the same?’

But some have expressed their support for the campaign. Georgina Estella said: ‘It’s fine when it’s not excessive.

‘But then you have those prize twats on a packed train with people either side of them and they are doing the splits. That’s not about comfort – that’s about being selfish!’ Class War has been contacted for comment.

The manspreading row comes after Russian student Anna Dovgalyuk was filmed pouring bleach into men’s laps on the St Petersburg metro because they were manspreading.

The clip went viral, with the 20-year-old law student accusing men of ‘gender aggression’, and her country being slow to address the problem.

But it was later slammed as ‘Kremlin propaganda designed to spread anti-feminist backlash in the West’.

It is now being alleged the stunt on St Petersburg’s metro was cooked up in Vladimir Putin’s troll factory which hired actors in a plot to whip up anti-feminism feeling.

Bodyguard star Richard Madden was shamed for ‘manspreading’ on the Tube by angry women who called for him to be castrated.

Madden, 32, was photographed on the Bakerloo line in June 2013 and the image was uploaded to the Men Taking Up Too Much Space On The Train website, where a user called for him to be ‘castrated’.

The commenter reportedly wrote: ‘Castrate him. Maybe it would free up some of the space his c*** is desperately trying to take up.’

The Men Taking Up Too Much Space On The Train website exposes a world of sexual politics that will strike a chord with anyone who has suffered at the hands of bad etiquette on public transport.

As the manspreading row gained momentum it was a common theme to reference his Game Of Thrones character, Robb Stark, who was Lord of Winterfell and later King in the North in the HBO fantasy drama. 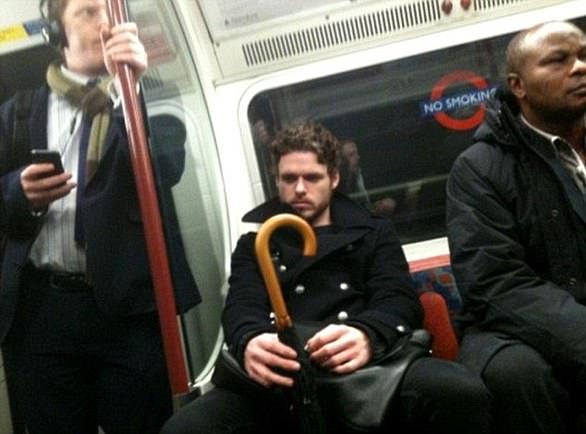 ‘Castrate him!’: Bodyguard star Richard Madden was spotted ‘manspreading’ on the London Underground in June 2013

‘Oh man, Robb Stark is a subway leg-spreader?! Maybe the Red Wedding was justified after all…’ wrote one blogger on Tumblr, where the picture was posted.

But some people confused Richard Madden for co-star Kit Harrington, who plays his half-brother on the show, with one saying: ‘You know nothing about Tube etiquette, Jon Snow’.

There were many comments in support of Madden, with some bloggers saying he was not actually taking up too much space, and as the ‘King of the North’ he was more than entitled to.

‘Hey now. Robb Stark is the King of the North. He can take up as much space as he likes. When you play the game of underground seating you either win or die,’ one user stated.

Another became more passionate in defence of Madden, saying: ‘I hope someone just found this picture on the internet and submitted it because if you saw Richard F****** Madden on the train and took a picture because he was taking up too much room, what are you even doing?’ 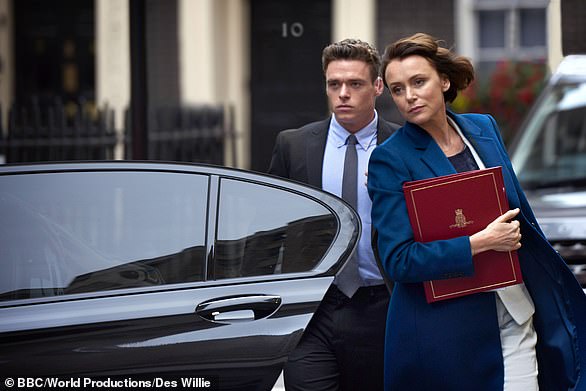 According to EU vs Disinfo, an organisation set up to expose lies spread by the Kremlin, one of the men in the video was paid for the stunt aimed to provoke a backlash against feminism.

Bodyguard star Richard Madden was famously accused of manspreading after he was captured on camera with his legs wide apart on a London Underground train.

The Game of Thrones actor, 32, was photographed on the Bakerloo line and the image was uploaded to the Men Taking Up Too Much Space On The Train website, where a user called for him to be ‘castrated’.

The commenter wrote: ‘Castrate him. Maybe it would free up some of the space his c*** is desperately trying to take up.’ 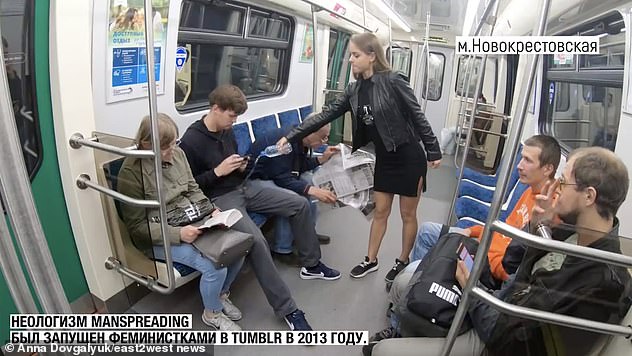 Anna Dovgalyuk, 20, accused men of ‘gender aggression’ and was pictured pouring water and bleach onto men’s laps on the St Petersburg metro 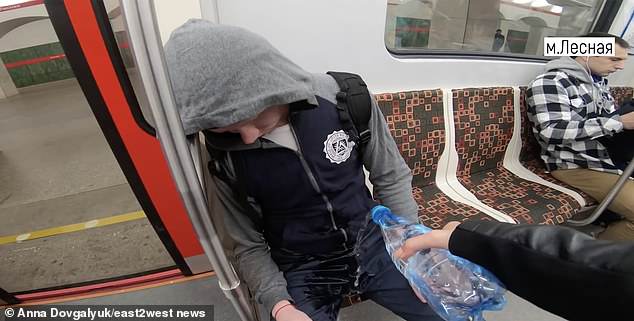 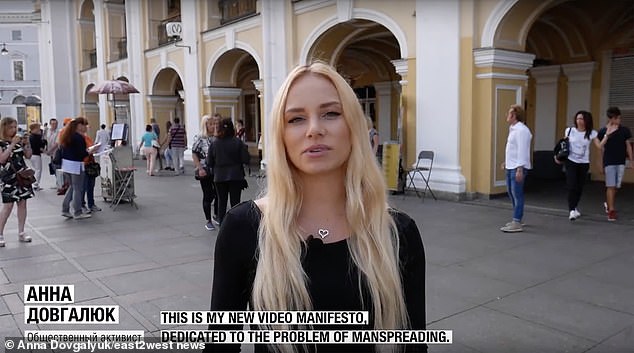 Miss Dovgalyuk, 20, (pictured) said: ‘This solution is 30 times more concentrated than the mixture used by housewives when doing the laundry’