The wife of the former Interpol president who disappeared in China says she fears for her life and the lives of her young children as she fights for information about her husband’s fate.

Grace Meng said she received a threatening phone call warning of ‘two teams’ of agents coming for her. The stranger also said ‘we know where you are.’

She has managed to keep her husband, Meng Hongwei’s disappearance from their seven-year-old sons by not letting them watch television.

‘Maybe they can feel something happened,’ she told  while wiping away tears. ‘They see that Mummy is crying. I told them, Mummy has a cold. I don’t want to break their hearts.’ 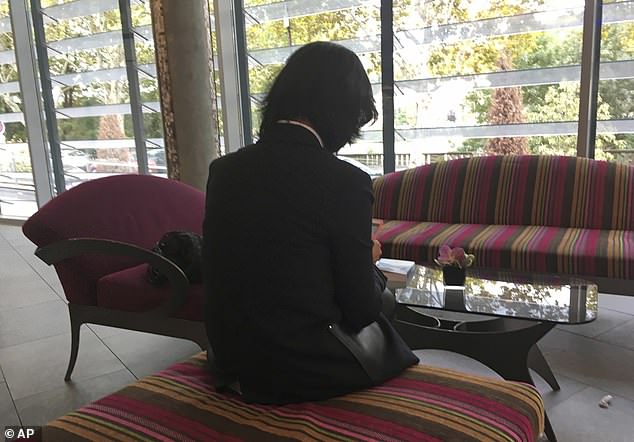 Grace Meng, the wife of missing Interpol President Meng Hongwei, who does not want her face shown, consults her mobile phone in the lobby of a hotel in Lyon on Sunday 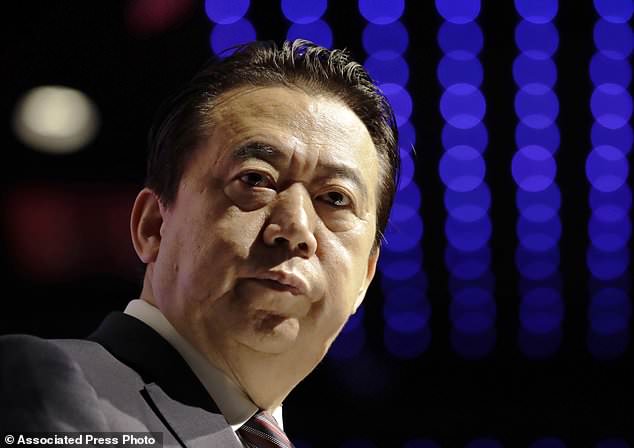 Beijing said Meng Hongwei is being investigated due to his own ‘wilfulness and for bringing trouble upon himself’, but remained tight-lipped regarding his whereabouts

‘They (Chinese authorities) like things under the table, in the dark room to make the deal,’ Mrs Meng added.

Mrs Meng said her last contact with her husband was by text message, on September 25, when he wrote ‘wait for my call’ and sent her a knife emoji after travelling back to China.

After a week with no news, on an evening when she was at home in Lyon having put their two young boys to bed, she had a threatening call on her mobile phone from a man speaking Chinese.

Wwhen she tried to ask a question, he repeated: ‘You don’t speak, you just listen to me.’

As a result, Mrs Meng is under French police protection.

‘I need help, I need security,’ she said, adding that the Chinese consulate had been calling incessantly, but that she refused to meet them alone and would only do so with the media and a lawyer present.

Chinese authorities said on Monday that Meng, who is also China’s vice minister of public security, was being lawfully investigated for taking bribes and other crimes that were a result of his ‘wilfulness’, but remained tight-lipped regarding his whereabouts. 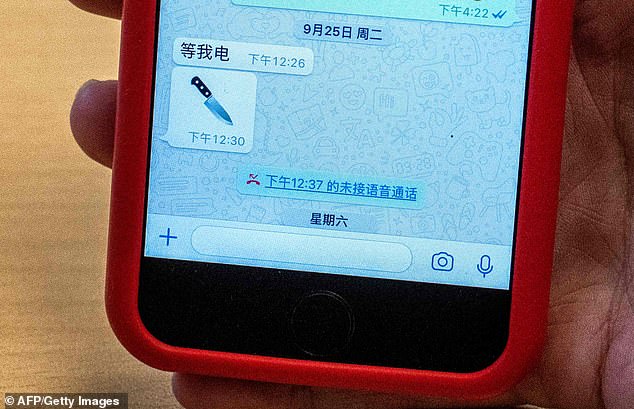 A journalist holds Grace Meng’s mobile phone, showing what she says is the last message exchanged with her husband: a text reading ‘wait for my call’ followed by a knife emoji

The Chinese Ministry of Public Security released a statement saying the investigation is a result of Meng’s ‘insistence of doing things his own way’ and he ‘only has himself to blame’.

Mrs Meng insisted that her husband is innocent: ‘We are bright, we are open … we are clean … we never ever broke the law’. She had previously suggested the bribery accusation is just an excuse for ‘making him disappear for so long’.

‘As his wife, I think he’s simply incapable of this,’ she said, adding she would be willing to make their bank accounts public.

‘I miss him very much. That’s why I always wake up at night,’ she said, unsure of when she will be able to see him again.

She said she spoke out in the hope that it might help other families in similar circumstances.

‘They died but can’t see their children, their son, their daughter – they’re lost. You can imagine. I have this responsibility to help the other people.’

Mrs Meng denied bribery allegations against her high-profile husband, and told the Associated Press in a previous interview that speaking out about his disappearance was placing her ‘in great danger’.

She also added that disappearances like that of her husband are ‘very common now in China’. He had told her that his colleagues would suddenly disappear with no reason. 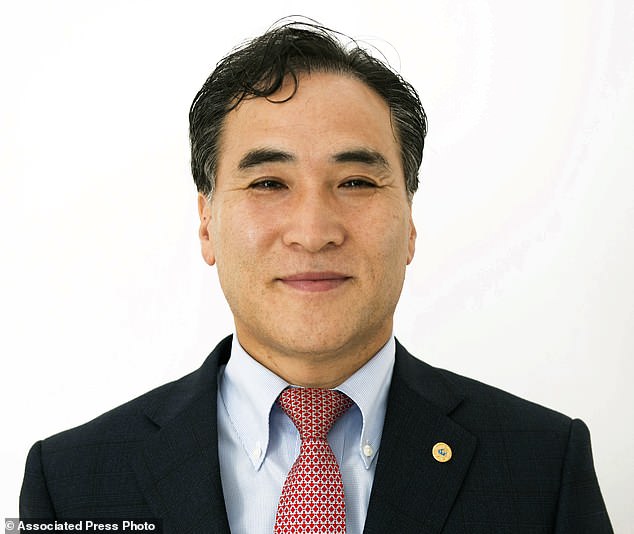 Meng disappeared on a trip home to Beijing late last month after a visit to the Nordics.

A long-time Communist Party insider with decades of experience in China’s sprawling security apparatus, the 64-year-old appears to be the latest high-ranking official to fall victim to a sweeping purge against allegedly corrupt or disloyal officials under President Xi Jinping’s authoritarian administration.

The revelation that China’s system of shady and often-arbitrary detentions could ensnare even a senior public security official with international stature has cast a shadow over the image Beijing has sought to cultivate in recent years as a modern country with the rule of law.

Beijing said the investigation into Meng’s suspected acceptance of bribery and violation of law was ‘very timely, completely correct and very wise’ and ‘fully demonstrates that anyone who violates the law must be severely prosecuted and severely punished’.

Hours earlier, Interpol said he had resigned as the international police agency’s president. It was not clear whether he did so of his own free will.

Interpol said South Korean national Kim Jong Yang would becomes its acting president, while it would appoint a new president at a November meeting of the organisation in Dubai.

Kim said Interpol had not been told about the investigation of its chief.

‘I find it regrettable that the top leader of the organization had to go out this way and that we weren’t specifically notified of what was happening in advance,’ Kim said in a phone interview. 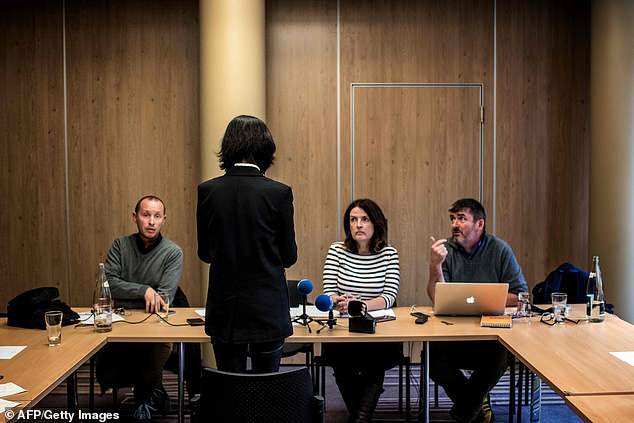 Grace Meng read a statement during her press conference in Lyon but would not allow reporters to show her face, saying she feared for her safety and the safety of her two children

‘We still don’t have sufficient information about what’s happening (with Meng) or whether it has anything to do with Chinese domestic politics,’ he added.

Mrs Meng had refused to speculate on what might have happened to him or whether he had been arrested, saying: ‘In China, what happened, I’m not sure.’

Mrs Meng refused to provide her real name to the AP, saying she was too afraid for the safety of her relatives in China. It is not customary for Chinese wives to adopt their husbands’ names. Mrs Meng said she has done so now to show her solidarity with her husband. Her English name, Grace, is one she has long used, she said.

A French judicial official confirmed to AP that police are investigating the threat against Mrs Meng, but said the probe has yet to determine whether Chinese teams were sent to Lyon.

Previously, Interpol had said that reports about Meng’s disappearance were ‘a matter for the relevant authorities in both France and China.’

The organisation went out of its way to say that its secretary general, not Meng, was responsible for the day-to-day running of the agency.

Meng is now the latest high-ranking official, and one with an unusually prominent international standing, to fall victim to a sweeping crackdown by China’s ruling party. 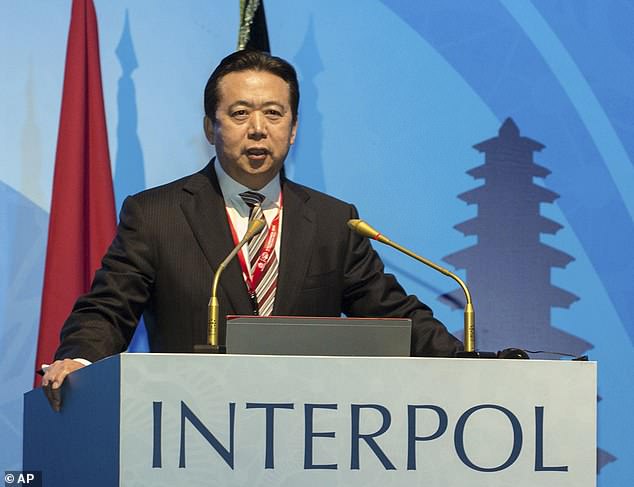 Meng is now the latest high-ranking official, and one with an unusually prominent international standing, to fall victim to a sweeping crackdown by China’s ruling party

In a sign of how seriously the authorities regard the case, Zhao Lezhi, the minister for public security, chaired a meeting in the early hours of Monday morning with senior officials of the ministry’s party committee to discuss it.

The ministry’s statement provided no details about the bribes Meng allegedly took or the other crimes he is accused of, but it suggested that he is also being investigated for political lapses.

It indicated that Meng, a member of the Communist Party, may have somehow been tainted by the former security chief and ex-Politburo Standing Committee member Zhou Yongkang, who is now serving a life sentence for corruption.

‘We should resolutely oppose corruption and resolutely eliminate the pernicious influence of Zhou Yongkang,’ it said.

Meng’s various jobs likely put him in close contact with Zhou and other Chinese leaders in the security establishment, a sector long synonymous with corruption, opacity and human rights abuses.

Zhou and other senior figures prosecuted in Chinese president Xi Jinping’s anti-corruption crackdown were mostly convicted of corruption but officials have since also said they were accused of ‘conspiring openly to usurp party leadership’.

At Monday’s meeting, officials were told that they ‘must always maintain the political quality of being absolutely loyal to the party’, the statement said. 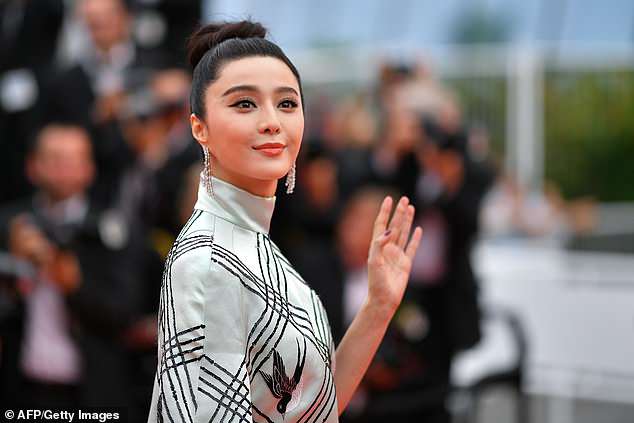 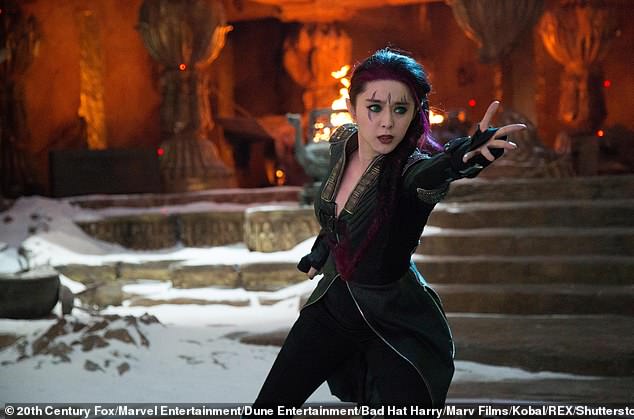 News of Meng’s apparent disappearance comes after Chinese officials announced that Hollywood star Fan Bingbing, who also vanished without a trace several months ago, has been ordered to pay millions of dollars in alleged back taxes and penalties.

Fan took to social media for the first time in months on Wednesday to apologise to fans and the Communist Party for tax evasion, shortly after news broke that authorities had ordered her to pay nearly $130 million in back taxes and fines.

The 36-year-old took to China’s Twitter-like Weibo to acknowledge her wrongs, beg for her supporters’ forgiveness, and apologise to ‘society, the friends who care about me, the public and the national tax authorities.’

‘Without the Party and country’s good policies, without the loving attention of the masses, there would be no Fan Bingbing,’ she wrote to her 62 million followers.

The actress, model and producer had been a ubiquitous household name in Chinafor years and tasted Hollywood success with a role in the 2014 blockbuster ‘X-Men: Days of Future Past.’

But she disappeared from the public eye and her once active social media presence went silent in May after allegations emerged that she had evaded taxes on a lucrative movie shoot, charges her studio called ‘slander’.