A sea of President ‘s supporters chanted ‘Lock her up!’ Tuesday night during a speech in western Iowa, a full half-hour before the president mentioned ‘s name.

The crowd of about 7,500 was angry at Sen. Dianne Feinstein, the Democrat who two weeks ago facilitated the public hearing testimony of Christine Blasey Ford against then-future Supreme Court Justice Brett Kavanaugh.

Trump rhetorically elbowed Feinstein at the tail end of a litany of anti-Democrat complaints, mocking her denial that her staff leaked a confidential letter in which Ford first accused Kavanaugh of sexually assaulting her when the two were teens.

Mispronouncing her name ‘Fein-steen’ as he often does, the president pantomimed a moment during the September 27 hearing in which the senator asked staff director Jennifer Duck for reassurance that her own aides had honored Ford’s request for privacy. 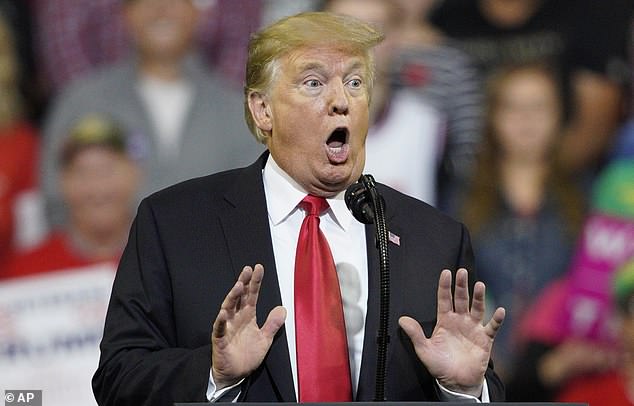 President Donald Trump blasted Democrats on Tuesday as ‘crazy’ and ‘the Dims’ during a raucous Iowa speech that drew chants of ‘Lock her up!’ at the first mention of Sen. Dianne Feinstein’s name 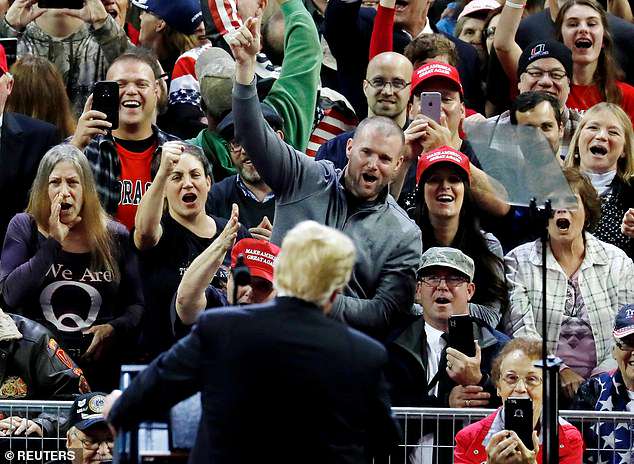 The ‘Lock her up!’ shouting has long been a Trump crowd response to the mention of Hillary Clinton’s name but on Tuesday it made its first appearance a half-hour before she did 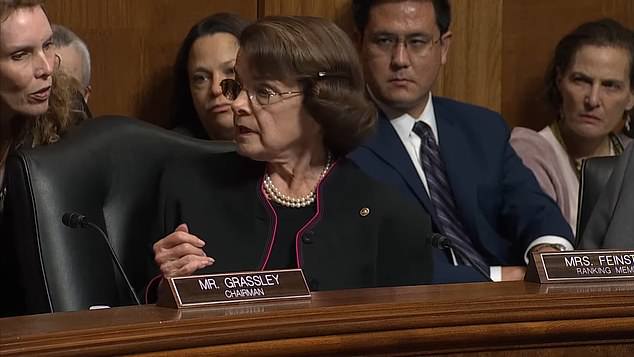 Feinstein, the ranking Democrat on the Senate Judiciary Committee, fumbled during a hearing last month when asked if her staff leaked a letter from a woman who privately accused Supreme Court nominee Brett Kavanaugh of sexually assaulting her decades earlier

‘Did you leak the documents?’ Trump asked, playing both sides of a Q-and-A with the ranking Demorcat on the Senate Judiciary Committee.

‘Wha, wha, what? No, I didn’t!’ he replied, playing the role of Feinstein as she suddenly threw a glance over one shoulder to grill her underlings: ‘Did we leak? Did we leak?’

‘No! No! No we didn’t!’ Trump’s fictional Feinstein said at last.

The ‘Lock her up!’ chant grew from thready to full-throated Clintonian proportions in five seconds flat.

‘I think they’re talking about Feinstein! Can you believe that?’ Trump laughed, judging her less than credible.

‘Was that the worst body language? Honestly!’ Trump said.

As cheers rocked the rafters, he stopped himself: ‘No, I don’t want to get sued. 99 per cent. See? Now I can’t get sued.’ 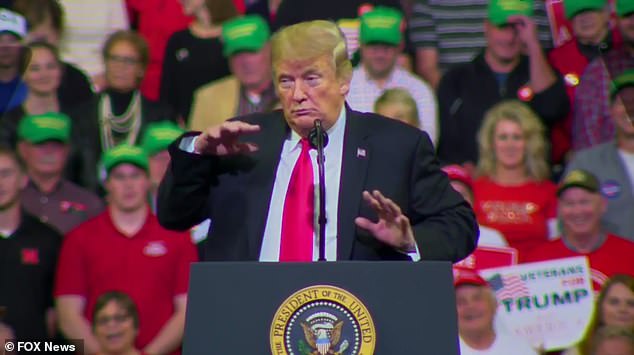 In Council Bluffs, Iowa on Tuesday night, Trump pantomimed the exchange between Feinstein and her staff director during the Sept. 27 Senate Judiciary Committee hearing 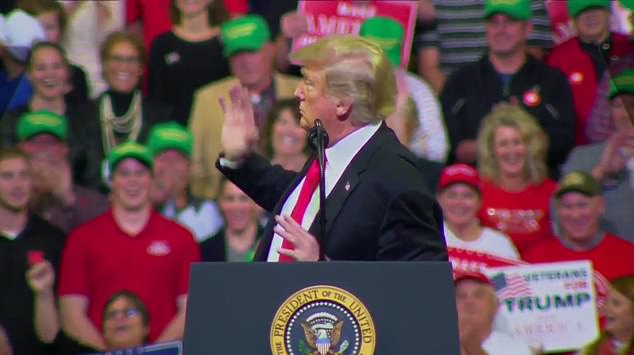 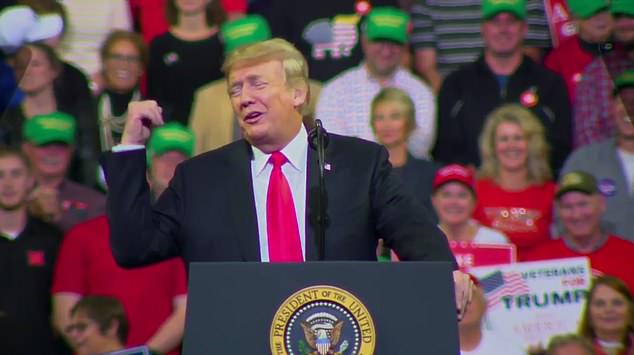 The president did mention Clinton later during his free-wheeling rendering of political oral history, and the crowd was ready with a ‘Lock her up!’ reprise.

The staccato slogan first hit America’s national consciousness during the 2016 Republican National Convention as Trump’s fans obsessed over Clinton’s use of an unsecured private email server that hosted some classified material while she was secretary of state.

Tuesday marked the first time a crowd in full Trump reverie weaponized it against someone else.

The president’s recent public rallies have been big on airing political grievances in the final weeks before the Nov. 6 congressional midterm elections.

While he props up Republican candidates wherever he goes and sometimes mocks their opponents – ‘Abby Finkenauer! Who the hell is that?’ he asked Tuesday of one Iowa Democratic congressional hopeful – he typically reserves most of his firepower for liberals who might pose a threat to his re-election in 2020.

Democrats, he said Tuesday, are ‘too dangerous to govern. They’ve gone wacko!’

And in a swipe at Massachusetts Sen. Elizabeth Warren, a favorite foil, he claimed Democrats have ‘gone so far left that they consider Pocahontas to be a rational person.’ 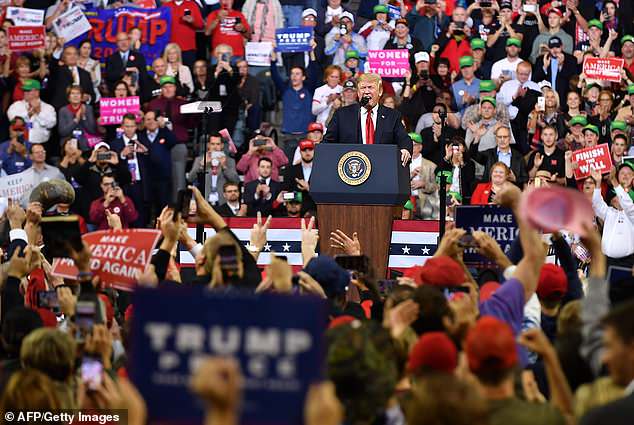 The president kept his anger level high through most of Tuesday’s rally speech, slamming Democrats as ‘the party of crime’ and complaining that they want to erase national borders and eliminate America’s immigration authorities 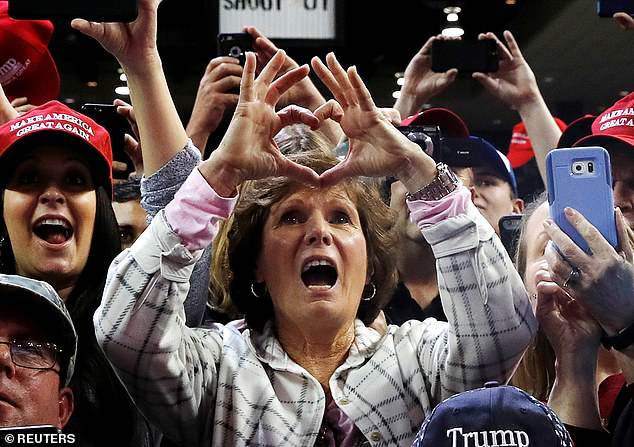 Trump’s crowd of about 7,500 people stood in hours of rainfall to see him at the Mid-America Center near Iowa’s border with Nebraska 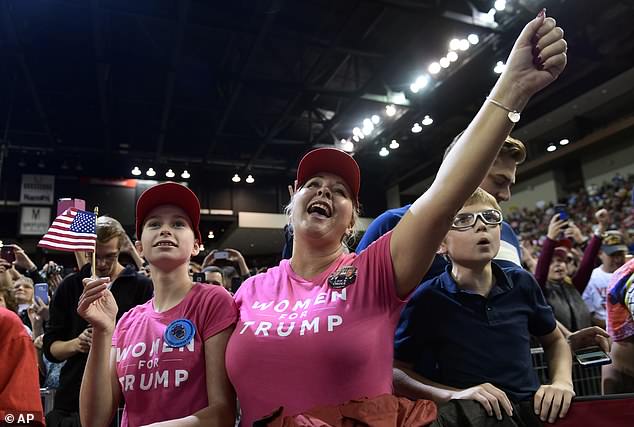 Trump has needled Warren with that nickname for more than three years, ridiculing her claim to be part Cherokee Indian and claiming she used that ethnic identity to obtain preferential treatment in university hiring.

‘Oh, I hope she runs!’ he said Tuesday, boasting that it would allow Republicans to ‘finally get down to the fact of whether or not she has Indian blood.’

Warren has repeatedly refused to take a DNA test to confirm her ancestry.

Blumenthal, he said, ‘tried to convince people for 15 years that he was a great war hero’ despite spending the Vietnam War stateside and out of harm’s way.

‘In their lust for power Democrats have become totally unhinged. They’ve gotten crazy!’ he said, calling them ‘the Dims’ instead of ‘the Dems.’

He continued to conjugate the rest of the Fox universe’s star talent, including Jeanine Pirro, Laura Ingraham, Tucker Carlson, Steve Doocy and Ainsely Earhardt, drawing thunderclaps of applause at each name. 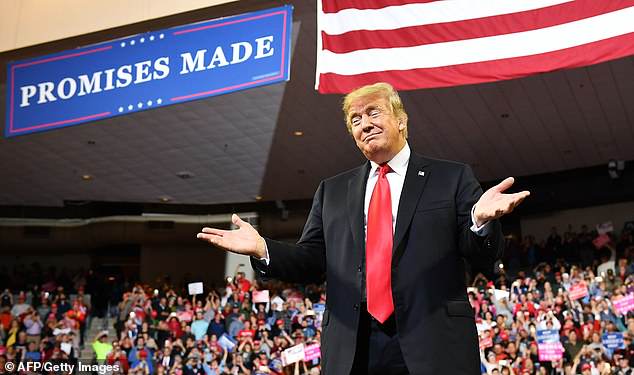 The president will have another rally Wednesday night in Erie, Pennsylvania 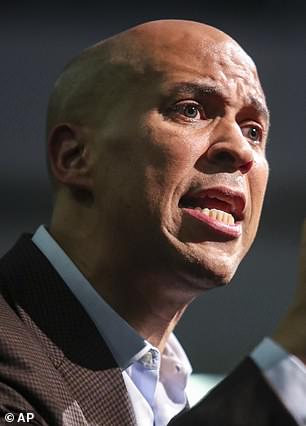 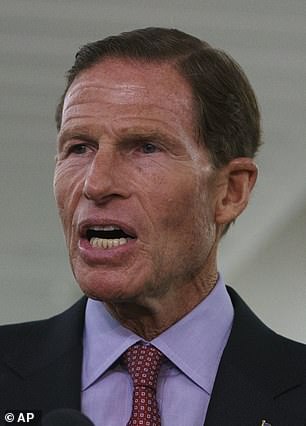 Trump clobbered Democratic Sen. Cory Booker (left) for the poor economic performance of the city of Newark when he was mayor; he also ridiculed Connecticut Sen. Richard Blumenthal for long claiming to have fought in the Vietnam War despite never having entered the country while in uniform 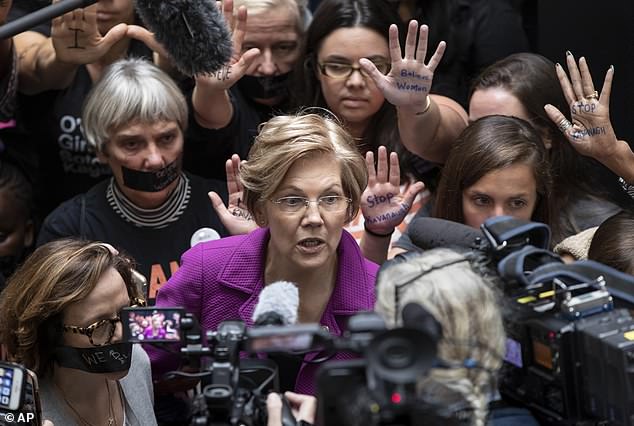 The president continued his feud with Massachusetts Democratic Sen. Elizabeth Warren, jabbing her as ‘Pocahontas’ for her longstanding but unproven claim to be part Cherokee

Tuesday night’s rally at the Mid-America Center was techincally a campaign event, not a presidential speech, one of four this week, and he returned over and over to the coming election.

He told his supporters that they would soon ‘render your verdict on the Democrats’ outrageous conduct.’

Council Bluffs is across the Missouri River from Omaha, Nebraska, where early voting began Monday.

Trump encouraged Nebraskans in the arena – a large majority, judging from applause when he asked them to declare where they lived – to take full advantage.

‘Go! Vote! Get it over with … Go do it immediately. Then you don’t have to listen to me tonight,’ he said.

‘In fact, if you did early voting, go home!’

‘Leave here now. Immediately,’ he joked. ‘Is it still open? Yes? Get the hell out of here.’