Prosecutors say a former Pennsylvania township official and his girlfriend spiked a woman’s drink and used a hidden camera to take sexually explicit photographs of her while she was unconscious.

Lawrence Weinstein and Kelly Drucker, both 44, are charged with false imprisonment, invasion of privacy, recklessly endangering another person, criminal conspiracy and violations of the Pennsylvania Wiretap Act. 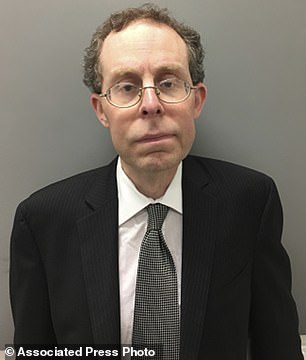 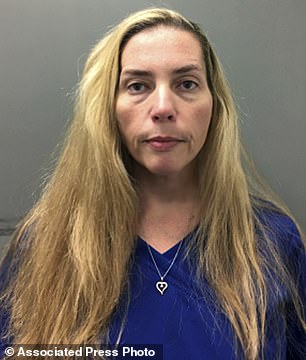 Lawrence Weinstein, a former Pennsylvania township official, and his girlfriend, Kelly Drucker, spiked a woman’s drink and used a hidden camera to take sexually explicit photographs of her while she was unconscious. Weinstein and Drucker are charged with false imprisonment, invasion of privacy, recklessly endangering another person, criminal conspiracy and violations of the Pennsylvania Wiretap Act. They surrendered to Bucks County detectives Tuesday, Oct. 9, 2018. (Bucks County District Attorney’s Office via AP)

Weinstein is a lawyer who recently left his job as a Northampton Township supervisor.

The plot came to light after Drucker’s ex-husband noticed his teenage daughter had been given her mom’s old phone according to .

He discovered the texts detailing the plan to spike a woman’s drink with high-proof alcohol so that she’d be unable to drive and be forced to go to Drucker’s house where a webcam was placed in the bathroom.

The couple planned for what they referred to as their ‘mission’ in late October 2017, investigators said.

Drucker then had dinner with the woman at a restaurant on the night of November 10, 2017, according to the criminal complaint.

During the dinner, Weinstein allegedly texted Drucker, instructing her on how to convince the victim to come back to her home.

‘Keep sober so you can make it happen and aren’t too drunk to win,’ Weinstein allegedly texted Drucker.

After the victim arrived at Drucker’s house, Weinstein sent her more text messages advising her on how to keep the victim there, police said. Weinstein also allegedly told Drucker to ask the victim sexually-charged questions and give her more alcohol.

‘Don’t worry about her. Get glasses on now,’ Weinstein allegedly texted the woman. ‘Get her naked and get [sic] door open.’

The victim later told police she remembered saying her wine ‘didn’t taste right’ and was sick the following morning.

Officials said they recovered photos of the victim while she was in Drucker’s bathroom.

Days later, Weinstein and Drucker had a text message conversation discussing plans for another ‘mission’ indicating that they wanted to find more victims.

Investigators say they found photos on Weinstein’s iPad showing him assaulting another unconscious woman in 2012.

That woman told police she wasn’t aware of the incident and didn’t consent to Weinstein touching her or taking the photos. Weinstein was charged with indecent assault in connection to that incident.

Bail is set for both Weinstein and Drucker at $300,000 and will next appear at a hearing on October 18.

Kim Kardashian shares heartwarming photo of 'morning cuties' Saint and Chicago
Netflix to give 3 films an exclusive run in theaters
EDEN CONFIDENTIAL: Tragedy for Aspinall clan as rock wife Amanda dies
'Just seen a SNOWFLAKE!': Londoners hit the panic button as first signs of snow
Husband battered his wife to death with a hammer two weeks after being accused of raping her
Jeremy Corbyn to back November election once Brexit extension in place
'Chemical incident' sees businesses evacuated on Essex industrial estate
Kate Middleton has shown 'more relaxed and accessible side' in lockdown'