claimed Monday that the emotionally draining Brett Kavanaugh saga was a ‘hoax’ perpetrated by ‘evil’ Senate Democrats involving some intentionally faked claims of sexual assault that were designed to derail the newest Supreme Court justice.

The president told reporters on the South Lawn of the White House as he left for a speech in that House Democrats are ‘thinking about impeaching’ the new Supreme Court justice if they take over control of the lower house of Congress next month.

Hours later in Orlando, Florida, Trump told a convention of police chiefs that the weeks of constitutional limbo that put Kavanaugh’s career in jeopardy and mobilized feminist groups ‘was a disgraceful situation brought about by people that are evil, and he toughed it out.’ 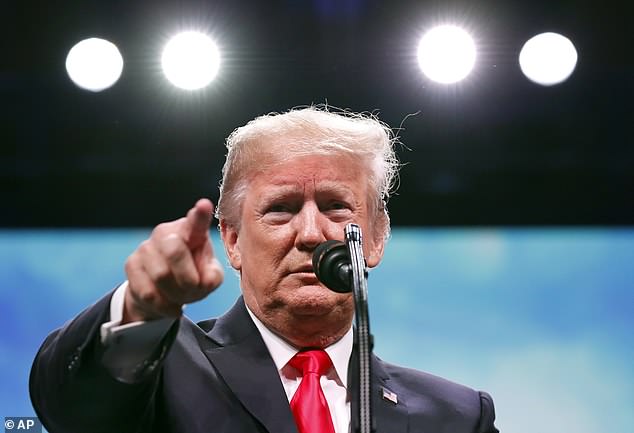 ‘He’s a great person, and it was very, very unfair what happened to him,’ Trump said. ‘False charges, false accusations, horrible statements that were totally untrue, that he knew nothing about.’

Trump didn’t name his devilish opponents, but he has been critical of Senate Democrats and others who brought Kavanaugh’s accusers forward and used them as levers of political pressure.

Senate Judiciary Committee Democrats gave a global platform 11 days ago to Christine Blasey Ford, who accused Kavanaugh of forcibly groping her and trying to undress her when they were both teenagers.

Republicans in Washington, most notably females, have said they believe Ford was sexually assaulted in the early 1980s, but also find Kavanaugh’s unequivocal denials convincing.

Sen. Susan Collins, whose ‘yes’ vote turned the tide in Kavanaugh’s favor, said Sunday on CNN that ‘I do not believe that Brett Kavanaugh was her assailant. I do believe she was assaulted, I don’t know by whom, and I’m not certain when. But I do not believe he was the assailant.’

But Monday marked the first time Trump has assigned a motive to Democrats or suggested the claims of any of Kavanaugh’s accusers were intentional fiction.

The president had a special level of scorn for Julie Swetnick, a woman who claimed Kavanaugh and his friends participated in gang rapes during the 1980s,

‘Take a look at the last one,’ he said. ‘The things they said about him! I don’t even think he ever heard of the word. It was all made up, it was fabricated, and it’s a disgrace.’

Lawyer Michael Avenatti brought Swetnick forward as a serious client and insists her stories are real. Avenatti also represents pornographic actress Stormy Daniels, the woman at the center of a hush-money arrangement related to an alleged sexual affair with the future president a decade ago.

Avenatti is carrying on his own dalliance – with the prospect of running for president in 2020.

Trump continued defending Kavanaugh on Monday, saying the newly minted justice ‘did nothing wrong’ and correctly noting that investigations found ‘no corroboration of any kind’ from witnesses to what Ford, Swetnick and Deborah Ramirez claimed to remember from more than three decades ago.

He predicted during his morning White Hous departure that midterm voters will reward Republican lawmakers who supported Kavanaugh, defying conventional wisdom that suggests Democrats have momentum fueled by resentful protesters.

‘I think it’s an insult to the American public,’ Trump said of the organized opposition to Kavanaugh. ‘And I think you’re going to see a lot of things happen on November 6th that would not have happened before.’