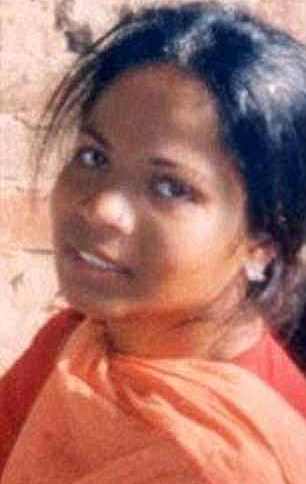 Hope: Asia Bibi, 54, a Pakistani mother of five, has been on death row since 2010 for allegedly insulting the Prophet Mohammed

Pakistan’s Supreme Court will begin hearing the final appeal of a Christian mother on death row for blasphemy, a notorious case which could see her become the first to be executed under the controversial laws.

Asia Bibi, a mother of five, has been on death row since 2010, following a conviction over an argument about a water bowl during which she allegedly insulted the Prophet Mohammed

If the the three-judge Supreme Court bench uphold the 54-year-old’s conviction, her only recourse will be a direct appeal to the president for clemency.

Her case has outraged Christians worldwide and been a source of division within Pakistan, where two politicians who sought to help Bibi were assassinated, including Punjab governor Salman Taseer, who was shot by his own bodyguard.

Hardliners in Pakistan regularly call for her execution, including in Islamabad’s Red Mosque.

One of the most vocal groups, the ultra-religious Tehreek-e-Labaik Pakistan (TLP), has vowed to attend the hearing and warned of  ‘terrible consequences’ if she is granted leniency.

The TLP, which makes punishing blasphemy its main campaign rallying cry and lionizes the bodyguard who killed Taseer, warned the court against any ‘concession or softness’ for Bibi.

‘If there is any attempt to hand her over to a foreign country, there will be terrible consequences,’ TLP said in a statement.

TLP won over 2 million votes in the July 25 elections, though it has no parliamentarians in the National Assembly and only holds two provincial seats. But it wields outsized influence due to street power of its die-hard supporters. 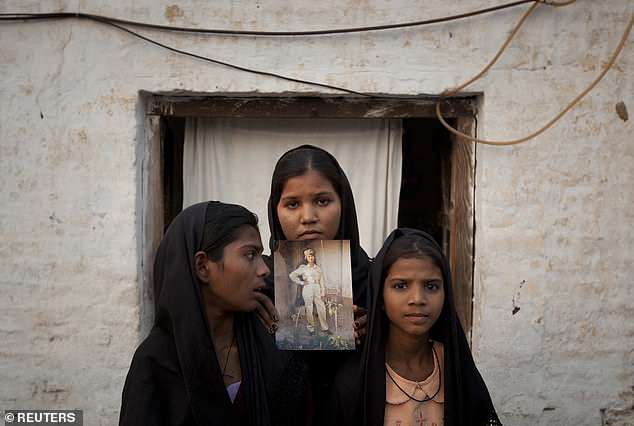 Family: Ms Bibi’s daughters, Esha, Sidra and Ashum, are seen holding a photo of their mother outside their home in Sheikhupura, Punjab in 2010

The allegations against Ms Bibi date back to 2009, when she was working in a field and was asked to fetch water.

Muslim women she was labouring with allegedly objected, saying that as a non-Muslim she was unfit to touch the water bowl.

The women went to a local cleric and accused Ms Bibi of blasphemy against the Prophet Mohammed.

Bibi has always denied blaspheming and her representatives have claimed she was involved in a dispute with her neighbours and that her accusers had contradicted themselves.

Blasphemy is charge so sensitive in Pakistan that anyone even accused of insulting Islam risks a violent and bloody death at the hands of vigilantes. 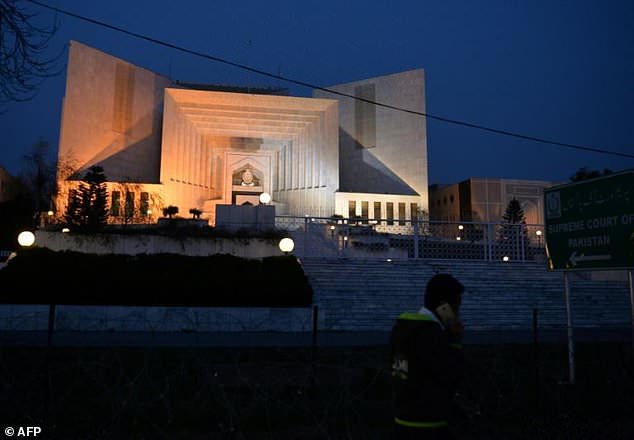 Hearing: The Supreme Court in Pakistan will hear the final appeal of a Christian woman on death row who has been accused of blasphemy

The charge is punishable by a maximum penalty of death under legislation that rights groups say is routinely abused by religious extremists as well as ordinary Pakistanis to settle personal scores.

The law does not define blasphemy and evidence might not be reproduced in court for fear of committing a fresh offence.

‘Aasia Bibi has become a symbol of all that happens to religious minorities where class and prejudice intersect and a dysfunctional justice system is unable to protect Pakistan’s non-Muslim citizens,’ the English-language Daily Times said in an editorial on Monday.

But calls for reform have regularly been met with violence and rejected.

Pakistan’s Prime Minister Imran Khan launched a wholehearted defence of the laws during his election campaign earlier this year, vowing his party ‘fully’ supports the legislation and ‘will defend it’.