UFC President Dana White has confirmed has decided not to press charges against rival Khabib Nurmagomedov’s team following the mass brawl that marred the showdown.

The Irishman suffered a round four defeat by chokehold submission but all the headlines focused on what happened after as McGregor was punched in the head by a member of Khabib’s team after they stormed the octagon.

The melee all started as a victorious Khabib climbed out of the cage and into the crowd to frantically fight McGregor’s American team-mate Dillon Danis who it is believed had been taunting him during the bout. 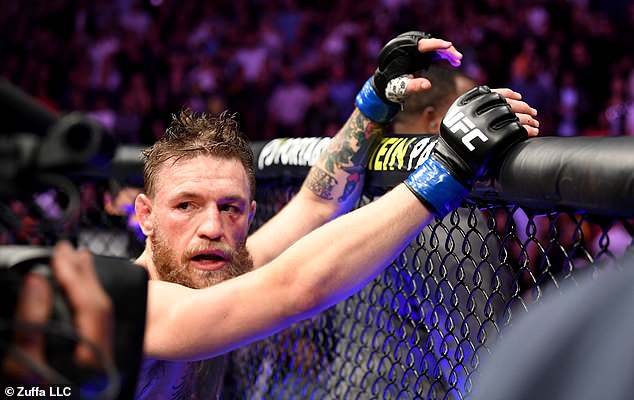 Speaking to reporters in a press conference at the T-Mobile Arena, White confirmed the three team members who were initially arrested have been released.

Trying to explain why tensions boiled over so horrifically, White described events as a ‘s*** show’ for the sport with so many people tuned in for the fight.

‘I saw one of Conor’s guys yelling at Khabib, he then jumped over the octagon and went after him,’ the UFC President began.

‘Two of Khabib’s guys got into the octagon and hit Conor with some shots from behind. They have pulled the footage from us and have withheld Khabib’s purse but not Conor’s.’

Once the drama had been contained and diffused, it emerged that the Nevada State Athletic commission withheld Khabib’s $2million pay-check after reviewing footage of the ugly scenes but decided to award McGregor his $3million.

Holly Willoughby models skimpy bras in epic Argos catalogue throwback
Suzy Lamplugh murder police dig up former back garden of prime suspect’s mother
People in the office who constantly fire off 'helpful' emails are actually trying to get ahead
Felicity Huffman agrees to plead guilty in college bribery scam
Eight children are among 16 people stabbed in attack in a park near Tokyo
While Phil Neville bids for World Cup triumph, his other half gives their mansion a makeover
Shopper whose PLT bikini turned see-through in water left shocked when asked to send video evidence
Rock drummer Ginger Baker, 80, is 'critically ill' in hospital three years after heart surgery