The new SNL episode on Saturday aired just hours after the Senate voted 50-48 nearly along party lines to confirm Kavanaugh, who was then sworn in to the Supreme Court.

‘We made a lot of women real worried today, but I’m not getting pregnant so I don’t care,’ said McKinnon’s Graham. 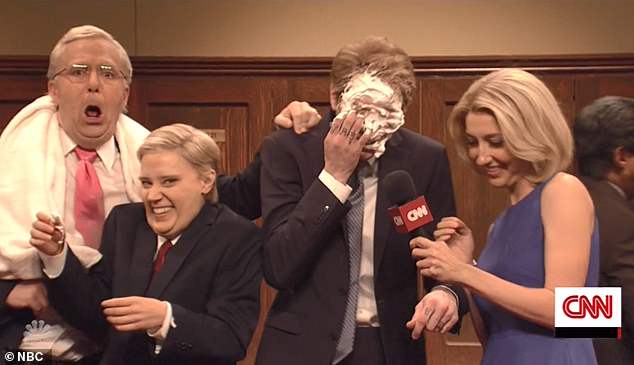 ‘Let’s ralph til we boof!’ shouted Republican Senator John Kennedy, portrayed by Beck Bennett, as Montell Jordan’s song ‘This Is How We Do It’ pumped in the background.

‘Ralph’, or vomit, and ‘boof’ were both terms that appeared in Kavanaugh’s yearbook. He argued the latter term referred to flatulence, though among others is it slang for rectal administration of alcohol.

Cecily Strong also appeared as Maine Senator Susan Collins, the Republican who dramatically announced that she would cast the deciding vote in favor of Kavanaugh on the Senate floor on Friday.

‘Oh please, the last thing I wanted was to make things about me,’ Strong’s Collins said. 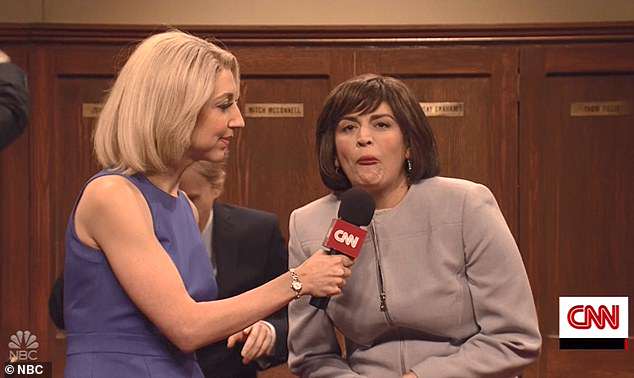 Cecily Strong (right) also appeared as Maine Senator Susan Collins, the Republican who dramatically announced that she would cast the deciding vote in favor of Kavanaugh

‘That’s why I told all my female supporters to tune in at 3 o’clock, so I could tell them all, psych!’

‘Hey, yeah, obviously I was really sad about the whole process as you could tell from my resting bitch face and really considered all the testimony…’ the Flake character said, but was interrupted when McKinnon’s Graham stuffed a pie in his face.