A former sex slave has revealed the harrowing moment she was picked by a giant jihadi brute from a group of terrified Yazidi women – as they screamed and vomited in terror.

Nadia Murad, 25, has spoken in shocking detail of her experiences at the hands of ISIS sex traffickers – who treated women as ‘animals’ touching them wherever they pleased.

Writing in her autobiography, the now Nobel peace prize winner, spoke of her experiences one night at a slave market.

She said: ‘We could hear the commotion downstairs where militants were registering and organising, and when the first man entered the room, all the girls started screaming.’ 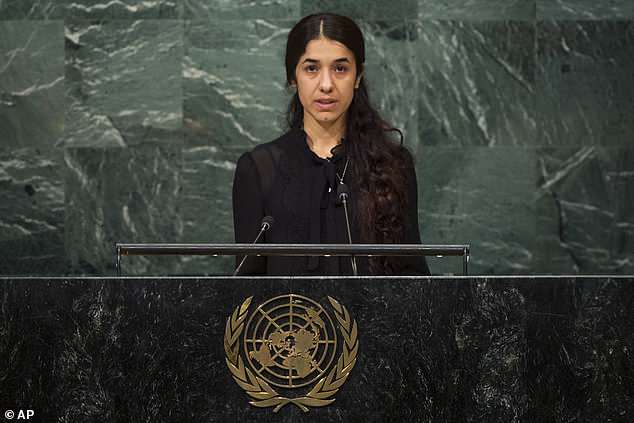 Nadia Murad (pictured here addressing the U.N.) was captured by ISIS sex traffickers when her home village of Kocho in Sinjar, northern Iraq, was attacked 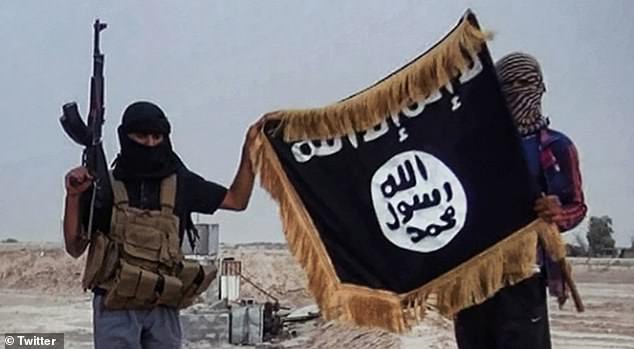 The entrance of the men would terrify the women who, Ms Murad says ‘would double over and vomit on the floor’.

They would then ask if the women were virgins to which the vendor would reply ‘of course.’

Ms Murad’s autobiography, which is featured in  today, recalls in harrowing detail this examination process.

She says: ‘The militants touched us anywhere they wanted, running their hands over our breasts and our legs, as if we were animals.’

Eventually Ms Murad was sighted from among the crowd by a high-ranking militant named Salwan – a man she claims ‘looked like a monster’.

His strength was daunting, she claims.

Ms Murad said: ‘He could crush me with his bare hands. No matter what he did, and no matter how much I resisted, I would never be able to fight him off. He smelled of rotten eggs and cologne.’ 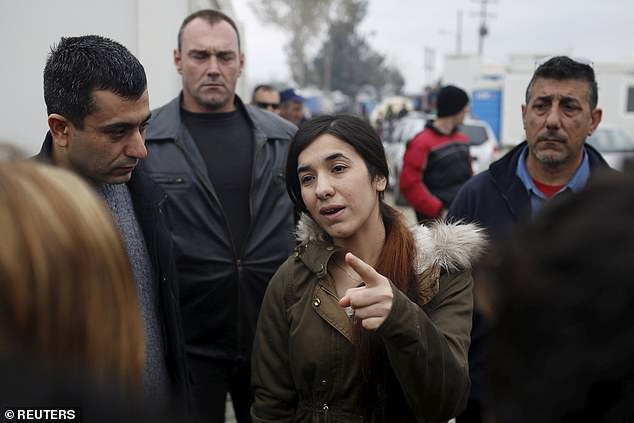 Nadia Murad walks through a makeshift camp for migrants and refugees at the Greek-Macedonian border near the village of Idomeni, Greece in 2016

The terror of this jihadi brute became so overwhelming that she eventually threw herself at a smaller man – begging him to take her.

The man, who was a judge in Mosul, agreed.

Ms Murad had found herself at the hands of ISIS sex traffickers after her home village of Kocho in Sinjar, northern Iraq, was attacked.

She was captured alongside her sisters and lost six brothers and her mother.

Eventually Ms Murad was able to escape her ISIS captors, smuggling herself out of Iraq.

She later went as a refugee to Germany in early 2015.

This year’s Nobel peace prize was awarded to her alongside two others. 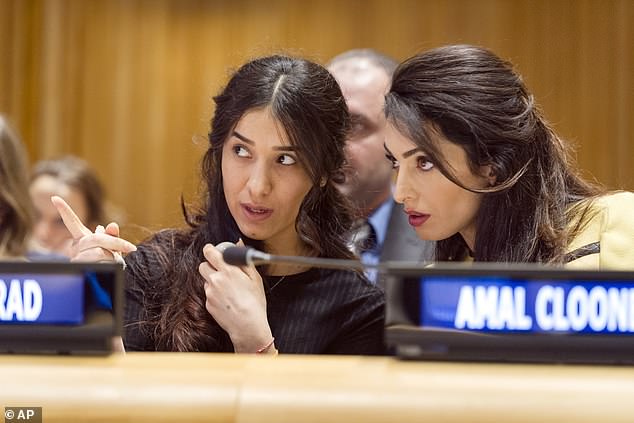 Nadia Murad (left) a Yazidi former captive of the Islamic State, and Amal Clooney (right) during a High-level event at United Nations headquarters. The 2018 Nobel Peace Prize on Friday was awarded to Murad and Congolese doctor Denis Mukwege. Clooney helped Murad with the foreword to her 2017 autobiography The Last Girl: My Story of Captivity and My Fight Against the Islamic State 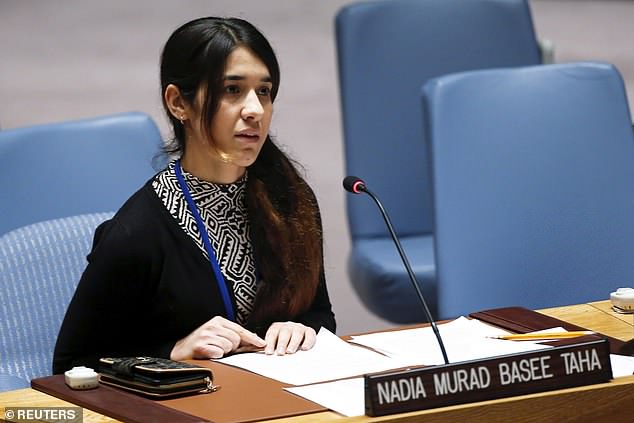 Outlining the reason for the decision, the committee said: ‘She has shown uncommon courage in recounting her own sufferings and speaking up on behalf of other victims.

‘Nadia Murad is one of an estimated 3,000 Yazidi girls and women who were victims of rape and other abuses by the IS army.

‘The abuses were systematic and part of a military strategy. They served as a weapon in the fight against Yazidis and other religious minorities.’

ISIS jihadists organised slave markets for selling off the women and girls, and Yazidi women were forced to renounce their religion.

For the jihadists, with their ultra-strict interpretation of Islam, the Yazidis are seen as heretics. 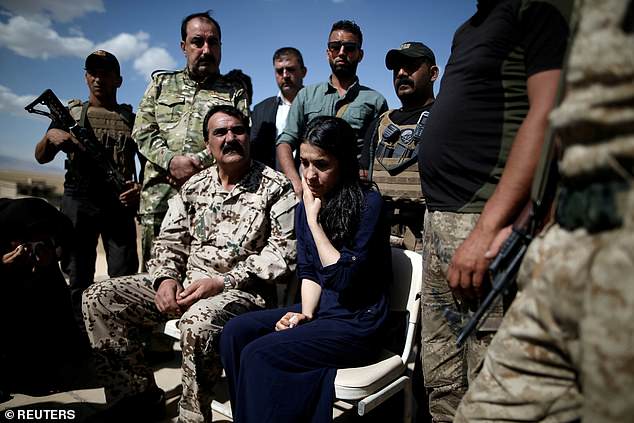 The Kurdish-speaking community follows an ancient religion, revering a single God and the ‘leader of the angels’, represented by a peacock. They numbered around 550,000 in Iraq before 2014, but some 100,000 have since left the country. 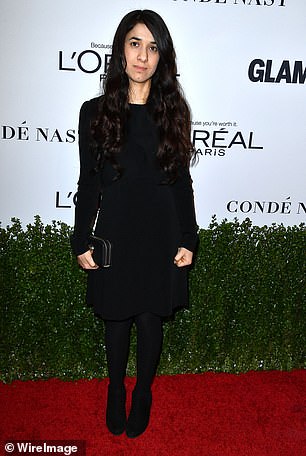 After herself being granted asylum in Germany in 2015, Murad continued the fight for the 3,000 Yazidis who remain missing, presumed still in captivity.

She has said that IS fighters wanted ‘to take our honour, but they lost their honour’ and has dedicated herself to what she calls ‘our peoples’ fight’.

Murad has now become a global voice, campaigning for justice for her people and for the acts committed by the jihadists to be recognised internationally as genocide.

At just 25, is the second youngest Nobel peace prize winner. The youngest was Malala Yousafzai, who won in 2014 at 17-years-old after she was shot in the head at close range by the Taliban for campaigning for girls’ education in Pakistan, where she grew up.

Nadia Murda’s biography The Last Girl: My Story of Captivity and My Fight Against the Islamic State, published by Virago, is out now.

Who is Nadia Murad?

Nadia Murad, a Yazidi human rights activist and survivor of sexual slavery by Islamic State in Iraq has won the Nobel Peace Prize for 2018

She was born in 1993 into a farming family in the small mountainous village of Kocho in Sinjar, Northern Iraq.

In August 2014, when she 19 years old, Murad was abducted with other Yazidi women, including her sisters, when Islamic State jihadis stormed the village.

She lost six brothers and her mother in the attack; the ISIS fighters murdered as many men as they could and any women they considered too old to be sold as sex slaves. Children were kidnapped to be trained as jihadis.

Murad was held as a captive as a slave in the city of Mosul –  the de facto ‘capital’ of the IS’s self-declared caliphate – where she was beaten, burned with cigarettes, and repeatedly gang-raped.

Like thousands of Yazidis, Murad was forcibly married, made to convert to Islam and wear makeup and tight clothes – an experience she later related in front of the United Nations Security Council.

She escaped after one captor left the house unlocked and was taken in by a family who managed to smuggle her out of the area controlled by Islamic State with false papers.

She lived in refugee camps, which was where she discovered the fate of her family, until the Government of Baden-Württemberg offered her asylum in Germany with 1000 other women and children.

The same year she became the first Goodwill Ambassador for the Dignity of Survivors of Human Trafficking of the United Nations (UNODC).

Murad’s book, ‘The Last Girl’, was published in 2017, with a foreword by Lebanese-British lawyer and rights activist Amal Clooney.

In August, she announced her engagement to fellow Yazidi activist Abid Shamdeen.

‘The struggle of our people brought us together & we will continue this path together,’ she wrote.

Insurers ‘invoice grieving widow $10ok two weeks’ after husband died
New claim that Michael Cohen's phone was in Prague at time of meeting described in Trump dossier
Mother is told she's doing her son 'a disservice' by Googling his symptoms
Motorcyclist awarded $21M in damages after being hit by driver who didn't signal when changing lanes
Trump met with 'FBI lovers' actors and Diamond and Silk during coronavirus panic
Coronavirus Canada: People 'clap for carers' in Vancouver
Trump says protesters have been 'treated a little bit rough'
NYC teacher, 30, who was twice turned away from ER dies from coronavirus