Mattress Firm has filed for bankruptcy as it prepares to close as many as 700 stores across the US due to exploding competition from online retailers such as Amazon and Casper.

America’s largest mattress company has been facing declining sales as more and more customers opt to buy their beds online – trusting reviews over testing them out in person.

The bankruptcy filing came just days after online giant Amazon announced it will be entering the growing bed-in-a-box business popularized in recent years by Casper, Purple and Tuft & Needle.

Some 200 brands are now offering bed-in-a-box options, which allow customers to order mattresses conveniently online, try them out at home and return them if they aren’t satisfied.

Analysts say Mattress Firm’s financial decline is also due in part to its aggressive expansion in recent years, which has resulted in too many locations located too close together, which in turn cannibalize each other’s sales.

The Houston-based retailer, which purchased Sleepy’s in 2016 and Mattress Giant in 2012, experienced an 11.2 percent decline in sales last year, according to an investor presentation released Friday. 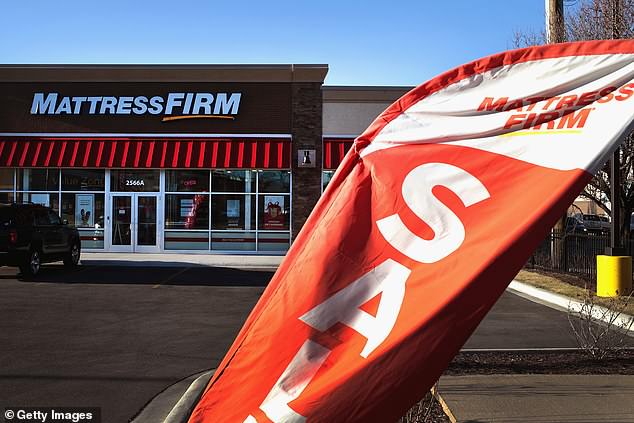 By filing for chapter 11 bankruptcy protection, Mattress Firm hopes to get out of about 700 unfavorable leases and begin paying back a mountain of debt.

In a press release Friday, officials announced plans to immediately close 200 underperforming stores before determining whether to maintain or close another 500 stores in the coming weeks.

‘We will continue to provide unmatched value to our customers by offering the best quality beds at prices that fit any budget today, tomorrow and into the future,’ said CEO Steve Stagner said in the release.

Mattress Firm is the latest in a string of national retailers, including Brookstone and Nine West, to file for bankruptcy as consumers flock online.

Bankruptcy law expert Daniel Lowenthal told DailyMail.com: ‘Many retailers these days use bankruptcy to liquidate. The Mattress Firm case is different. It will remain in business after it uses a quick bankruptcy process to close hundreds of stores, secure new financing, and pay off its creditors in full.

He continued: ‘The past few years have been tough for Mattress Firm. It had too many stores, faced competitive industry pressures, and also had a corporate parent that was rocked by an accounting scandal. But now its goal is to get in and out of bankruptcy fast and regroup with new financing. 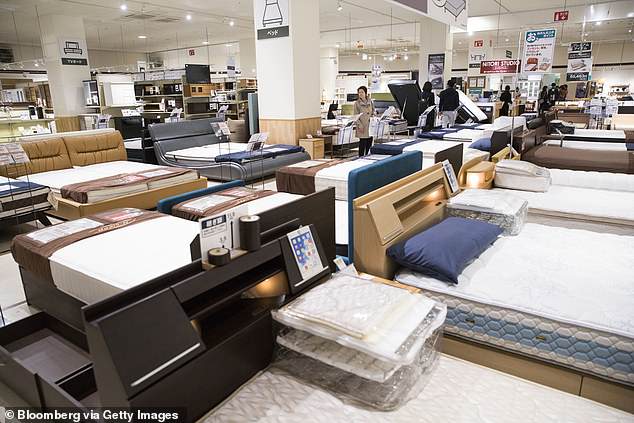 An estimated 15 percent of mattress purchases are now made online, according to recent data, putting a serious dent in sales by brick-and-mortar retailers like Mattress Firm (pictured)

Mattress Firm has lined up $250million in bankruptcy financing to keep the doors open at its remaining stores during the bankruptcy case, along with an additional $525million financing to fund its exit from chapter 11.

According to the press release, the company hopes to perform the necessary reorganization and exit bankruptcy in about two months.

Stagner said: ‘We intend to use the additional liquidity from these actions to improve our product offering, provide greater value to our customers, open new stores in new markets, and strategically expand in existing markets where we see the greatest opportunities to serve our customers.’

The scandal wiped more than 90 percent off Steinhoff’s market value and brought the company under intense regulatory scrutiny.

Before re-expansion, however, Mattress Firm will have to tackle a mountain of debt, including $64.7million owed to Simmons Manufacturing Co and another $25.5million owed to Serta Mattress Co.

The mattress suppliers are listed as the company’s two largest creditors on the bankruptcy filing.

‘This is a wake-up call for traditional mattress chains: The 1960s model doesn’t work anymore,’ Bob Phibbs, chief executive of New York-based consultancy the Retail Doctor, told the of the filing.

‘The traditional mattress-buying experience didn’t make people feel like they mattered. It made them feel used,’ he said.

Phibbs explained that the barrage of promotions used in the tradition model made it difficult for customers to trust if they were getting the best deal, whereas the new online model is more transparent about pricing.

‘The reality is that mattress companies have been ripe for disruption,’ he said.

As Mattress Firm scales back, some competitors who’ve eaten into the company’s profits with web sales – which now make up 15 percent of all mattress sales – have begun to expand into brick-and-mortar retail with pop-up shops or by partnering with established furniture retailers.

Casper Sleep Inc recently announced its plans to open 200 stores in the US as they also work against the crowding online mattress market.

Walmart moved in the opposite direction when it launched its own online premium mattress brand, Allswell, earlier this year.