Flu shot season has begun, and with it the classic water-cooler conversation: ‘Do I really need it?’

There is no evidence to support fears that the vaccine could be harmful, or even that it’s pointless.

However, vaccination rates dropped last year, particularly among children, and health officials are urging Americans not to get complacent.

Last year’s flu season was the worst since records began in the 1970s, killing 80,000 Americans.

To answer readers’ concerns about the shot, we spoke with Dr Pritish Tosh, a family physician and infectious disease specialist at the Mayo Clinic. 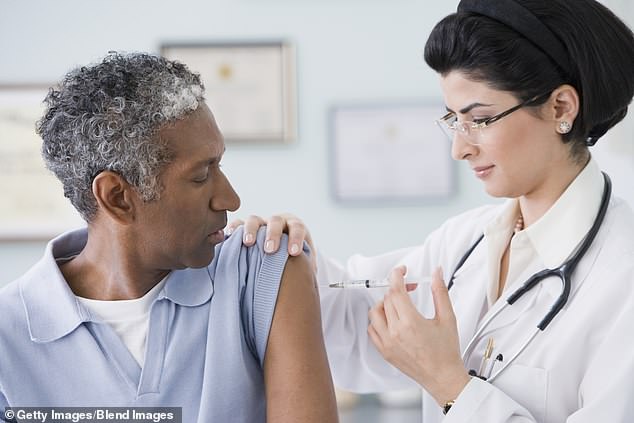 Q. WILL THE FLU SHOT MAKE ME SICK?

There isn’t any live virus in the influenza vaccine so it’s impossible to get the flu from the vaccine.

Even if there was, it would make much difference, explains Dr Pritish Tosh, a family physician and infectious diseases specialist at the Mayo Clinic.

‘There was a live vaccine that’s not available any more, but it was impossible to get the flu from that too,’ he said.

‘Those who get the vaccine compared to those who get a placebo are more likely to get a soar arm but that’s about it. And in fact, that’s what we want to see, it shows the vaccine is working.

‘There shouldn’t be a debilitating reaction, and the arm should go away within a couple of days.’

So why do so many seem to fall ill around the time of their shot?

There are two main reasons: other viruses and the power of our own fears.

Flu season typically begins in early December and lingers until March. Doctors recommend getting the shot from October.

Prior to December, those who feel under the weather have likely caught a common cold, especially if it’s a particularly temperamental fall, with temperatures fluctuating.

‘We give the shot before flu season begins – in late fall, early winter, when there are other kinds of viruses around but not influenza,’ Dr Tosh said.

‘You are as likely to get a cold when you get the flu shot as you would be if you hadn’t got the shot.

‘And of course, it’s certainly possible for people to get the flu at the same time as they get the shot if they get it later in the year.’

Perhaps more pressing, though, is our tendency to search for a reason for our ill health.

Dr Tosh explains: ‘The thing is, people remember that flu shot. If they come down with a cold two days later, they connect the two in their mind.

‘You can’t underestimate the psychological factor here. It’s hard to psychologically separate those things. We’re wired to make those connections.

‘But study after study shows there isn’t any risk.’

He added: ‘Thankfully this is a vaccine that we give frequently and we know a lot about it and we have done many studies over decades to understand it.’

Q. BUT WILL IT AT LEAST MAKE ME FEEL WEAK?

Again, Dr Tosh explains, if you feel weak after the flu shot it is either due to something else or it’s psychosomatic.

Q. I THOUGHT THIS YEAR WOULD BE MILD BECAUSE LAST YEAR WAS DEADLY

H3N2 was the dominant strain for three years in a row between 2010 and 2014, and that could well be the case again.

As for this year, it’s still unclear.

It is near-impossible for the CDC to predict exactly which strains will hit the US on any given season.

Last year, there was an indication that H3N2 would strike America because that’s what hit Australia, and flu seasons tend to have one dominant strain globally.

But for now, we still don’t know.

A. Every year, researchers take a guess in spring as to what the next flu strain will be, and they start developing the vaccine, which is cultivated in eggs.

That means it is possible to miss the mark.

However, even if the vaccine is designed to target every strain possible, some strains are particularly difficult to fend off – for example, we have never come close to designing a vaccine for H3N2 (last year’s deadly strain) that is more than 34 percent effective.

Why is H3N2 so elusive? Again, no one has a clear answer, and H3N2 remains the most baffling strain plaguing infectious disease researchers.

But part of it could have something to do with our first flu exposure.

The H3N2 first hit the US exactly 50 years ago. As it happens, the worst-affected Americans are over 50 years old.

According to a study published by Harvard in 2015, our flu immunity is shaped by our first flu exposure. That strain of flu ‘imprints’ itself on the immune system.

That theory remains disputed, but less so as more and more research seems to support the idea.

While that’s not the most useful information for immediate action, it does offer an explanation as to why baby boomers (aged 50 to 64) are more hard-hit this year than usual.

A. Ask any doctor, or the Centers for Disease Control and Prevention directly, and they will say ‘yes‘.

The reason is two-fold.

First, the vaccine is designed to protect against not just the predominant strain (H3N2) but also the H1N1 (another Influenza A strain) and two B-viruses. Half-way through the season, new strains tend to emerge.

Second, it can help you even if you get sick.

‘Even if it isn’t as effective, that doesn’t mean the vaccine doesn’t have other benefits for protecting you after you get influenza,’ Dr Tosh explained.

‘The figures about vaccine efficacy don’t take into account how much the vaccine helps to lessen the severity in those who do get sick, which can be significant.’