An Only Fools And Horses actress has claimed the classic comedy would not get past censors in the #MeToo era.

Sue Holderness, who played Marlene in the series, would regularly have her bottom pinched by Sir David Jason’s Del Boy.

The pair would openly flirt in front of Holderness’ on-screen husband John Challis, who starred as ‘Boycie’ in the 1980s sitcom.

Holderness said such gags were no longer possible for modern scriptwriters, as she hit back at critics who also claimed the show was ‘racist’. 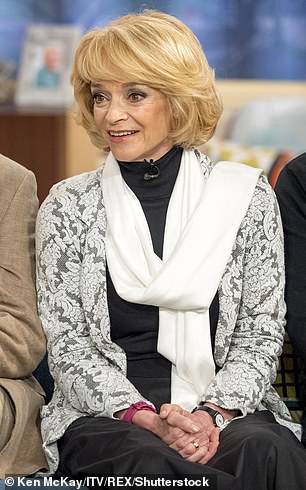 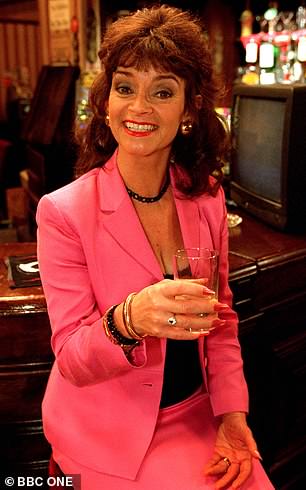 Sue Holderness (pictured on This Morning earlier this year), who played Marlene in the BBC series (right), would regularly have her bottom pinched by Sir David Jason’s Del Boy

‘Would gentleman be allowed to pinch ladies’ bottoms without being slapped in the face and have a writ put on them? I don’t know.

‘I must say I haven’t had my bottom pinched for a long time so gentlemen must be a little bit more nervous.’

Holderness, who is set to star alongside Sir David in a new series of Open All Hours, said strangers used to pinch her bottom in the street during the series’ peak. 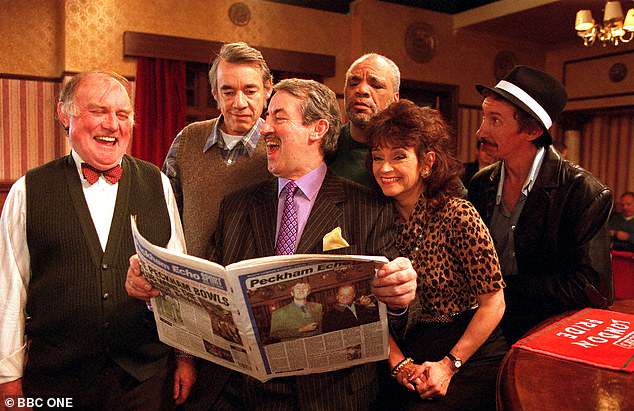 Sue Holderness is pictured with some of her Only Fools And Horses co-stars, including her on-screen husband Boycie (middle), played by John Challis

She added: ‘I’m happy to report that has stopped, which might be because of my great age now, perhaps I look too old.’

Last year, the son of show creator John Sullivan said the BBC’s ‘PC brigade’ would stop the show from being relaunched over fears of offending viewers.

Classic lines from Only Fools and Horses – but would you get away with them today?

Del Boy in the market: ‘Giving them away for ten pounds each, there you go. Fifteen quid to the black bloke, can’t say fairer than that.’

Jim Sullivan said: ‘Sadly I doubt that it could be made today – or if it was it certainly wouldn’t be the Only Fools that we know.

‘When dad originally wrote the show he wanted it to reflect the more honest and vibrant multi-cultural London that he knew – as opposed to the stereotypical, ‘Cor blimey guv’nor, have a banana!’ depiction of working-class Londoners that had gone before.

‘Nowadays you only have to mention something a bit foreign sounding and the PC mob are all over it like ants on a sugar cube.

‘To do today what dad did with Only Fools back then would at the very least require warning the audience beforehand about dangerous and unacceptable language.’

In the sitcom, set in Peckham in South-East London, Del Boy and Rodney were not ones to mince their words.

Indeed, in one episode Del casually orders a child to ‘pop down to the P*** shop’. Jokes were also made about an Indian family in the show, the Patels.