Christine Miller is petite; her oldest daughter is petite; so when her youngest, Stella, was still very little at 12 months old, she wasn’t immediately concerned.

But three months later, in March, Stella was still not growing. In fact, she had lost a little weight since her 12-month appointment.

It took a month-long hospital stay for the Miller family to find out that their little girl had an extremely rare metabolic disease, called cystinosis.

Now, everything Stella consumes comes to her through a tube into the 20-month-old’s belly, and some day she will need a kidney transplant.

Because her condition is so rare – and so serious – Stella’s life-sustaining medications are jaw-droppingly expensive, including a bottle of eye drops that costs $2,000 a week.

And keeping up with her medications, feeding schedule and side effects has become a full time job for her family. 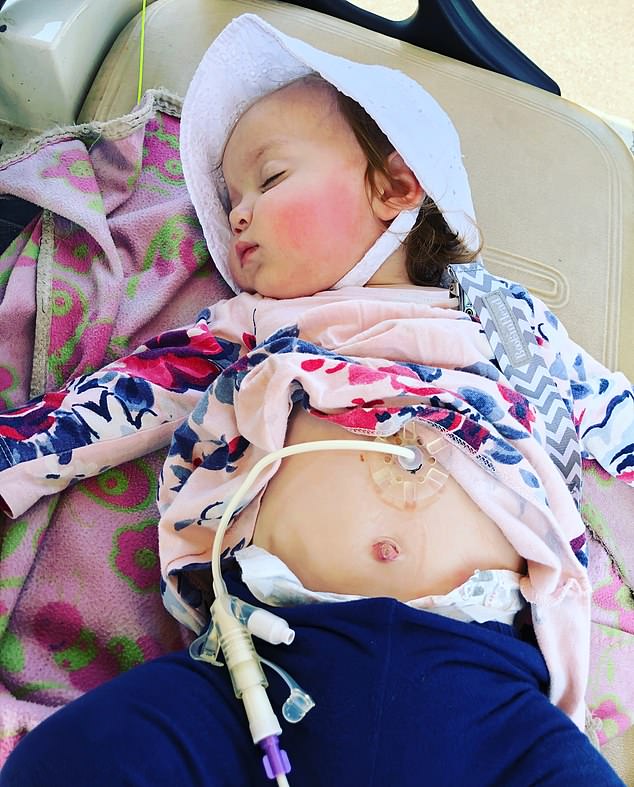 Stella Miller is 20 months old and has to have all of her meals as well as 10 different medications a day administered through a gastric tube due cystinosis, a rare kidney disorder

With continued proper treatment, Stella can have a reasonably normal childhood – and from her standpoint she already does.

The cherubic little girl hardly seems to notice the tube extending from her abdomen, her mother says. 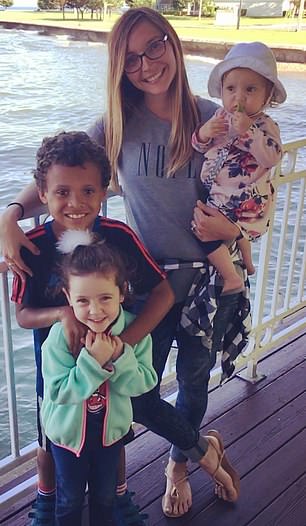 ‘I don’t think she remembers life before a [gastric] tube, before around-the-clock medications and weekly appointments.’

She remembers waiting 28 days in the hospital with her daughter as vile after vile was filled with Stella’s blood and tested for all manner of conditions – just to have them ruled out, one after another.

Christine and her husband, Nate, learned only a little bit at a time about what was happening to their daughter.

They discovered Stella had Fanconi Syndrome, which was causing her kidneys to malfunction and fail to properly absorb metabolites. Instead, components of her nutrition are washed out of Stella’s body with her urine.

But doctors suspected more was going on.

Finally, a vile of Stella’s blood was sent to one of only two labs in the US equipped to diagnosis cystinosis. Stella’s blood had the markers of the disease.

It only affects about an estimated 2,000 people worldwide, but symptoms become evident early.

Just like Stella, children with cystinosis fail to gain weight and therefore strength to walk in their first year of life. 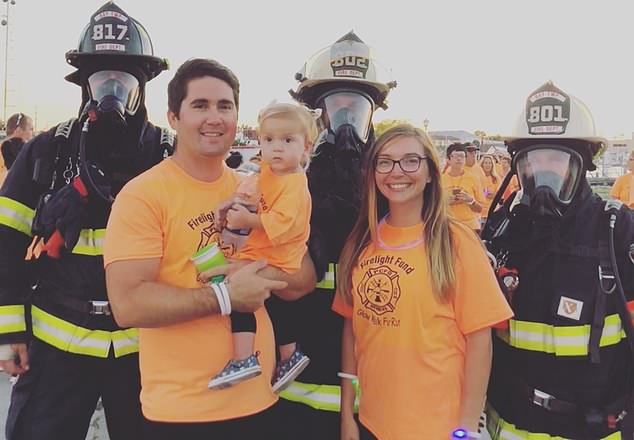 The Fire Department in the Miller family’s hometown of Port Clinton, Ohio, held a 5K fundrasier in Stella’s honor, and she attended with her father, Nate (left) and mother, Christine (right) 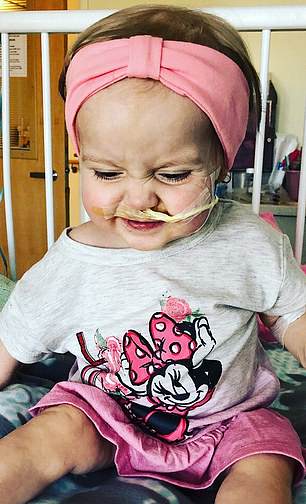 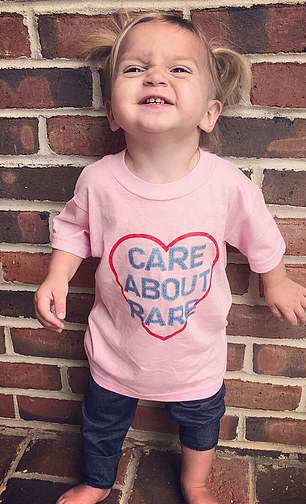 Christine says that she and her husband didn’t realize that their daughter looked sick for the first hear of her life (left). Now, Stella is growing, looks healthier and hits milestones (right)

Her diagnosis meant that the Miller family and their medical team could get Stella back on track, but it also meant that their routine was about to radically change.

‘Since May, we’ve been learning how to manage our new lifestyle, it’s been a life-altering experience for us,’ Christine says.

Stella needs 10 different medications, and because she is so young, getting her to swallow them was going to be a challenge.

And the key drug to treat cystinosis –  cysteamine – is foul-tasting, so patients sometimes fail to take it.

Plus, Stella had developed ‘food aversion,’ so she would barely eat, and the medication side effects made it worse.

‘To keep her healthy requires a very strict medication schedule. We’re giving her medications 10 times throughout the day through the G-tube in her belly. She doesn’t eat by mouth, so it’s been life-saving,’ says Christine.

Christine was a second grade teacher in Port Clinton, Ohio, where the family lives. But Stella’s treatment and feeding schedules are so demanding she was hesitant to hire anyone else to look after her daughter. 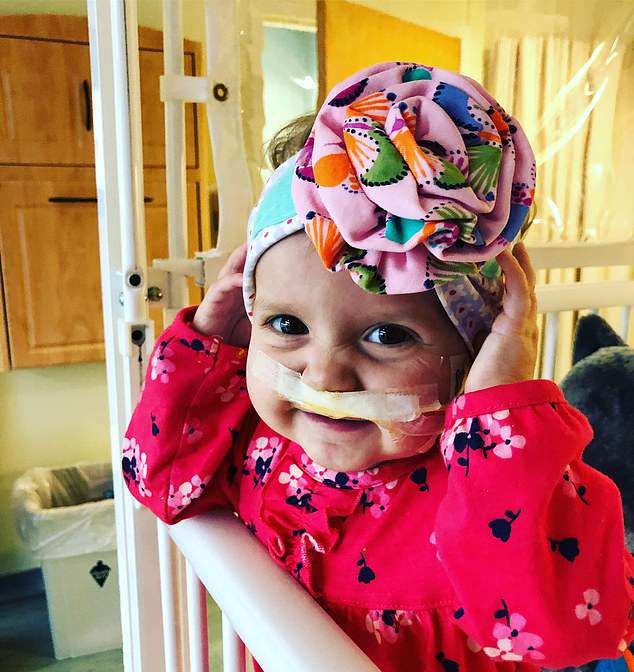 Stella had to stay at the hospital for a month, awaiting diagnosis while being fed through a tube in her nose

So Christine is taking this year off from teaching.

When she’s not making sure that Stella is getting her medications, Christine is fighting with the Miller family’s insurance company – Aetna – to make sure they have access to the drugs in the first place.

She claims that Aetna has tried to argue that it isn’t obligated to cover some of the most crucial things to keeping her daughter alive – like her formula, for instance.

‘But we can’t just go get them at the store, they have to be mixed in the pharmacy.’

Stella’s baby formula is made by Pediasure – one of the biggest brands for over-the-counter formula – but it isn’t the $10 a pack bottle you can buy at the grocery store.

A month’s supply of gastric tube-formulated food is $600.

‘I can’t buy it in the store, I have to buy it from a medical supply company,’ says Christine.

She estimates that about half of the medications that Stella needs aren’t covered, costing her family $400 a month out of pocket.

Fortunately the some of the most expensive ones are paid for by Aetna – at least until the company finds a reason they shouldn’t be. 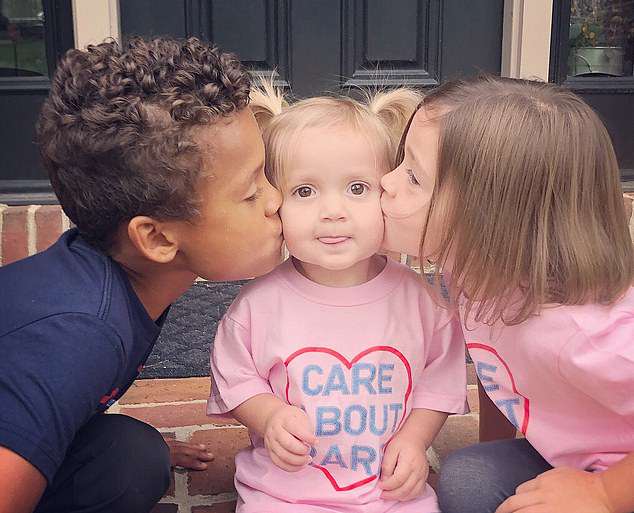 Among these are eye drops to that on their own would cost $2,000 a week.

Stella’s body doesn’t properly metabolize an amino acid, called cystine, so the substance builds up and forms crystals to form that could blind the little girl if her parents didn’t constantly administer the drops throughout the day.

In spite of it all, Stella remains a happy child, smiling easily and chasing after her eight-year-old brother, Christian, and five-year-old sister, Zava, eager to do everything they do.

Though Stella’s diagnosis brought immense change, Christine has taken comfort in being able to connect with other families of children with cystinosis, learning that these children can lead happy, active lives well into adulthood.

‘But we rally around her and make sure she has the best life she can. We’ve been forewarned about some things to expect’ – like the kidney transplant Stella will one day need – ‘but for now we’re enjoying those milestones she’s meeting: talking, singing, dancing,’ Christine says.

‘From the outside looking in, you would never guess that that little girl had such big challenges ahead, or daily struggles.’

Founding father of 'essentially the most comfy trainers on the earth' reveals the key behind his des...
Admiral warns U.S. that China's navy could sink two aircraft carriers and kill 10,000 sailors
Oscars will have NO host for the first time in nearly 30 years after Kevin Hart debacle
Midwestern states brace for winter storm to hit the region
At least 18 now dead in the bitterly cold weather as officials confirm student likely froze to death
Missing two-year-old boy is found by police after cruising on his toy tractor to the local fair
I'll drink to that! Beer can help you combat obesity and get a good night's sleep
1.5 million more laid-off workers seek unemployment benefits