A cheerleader has returned to her squad after undergoing surgery to fix the back condition that gave her a twisted spine.

Mackenzie Goldsboro, 16, of St Charles, Illinois, was diagnosed with Adolescent idiopathic scoliosis (AIS), which caused her spine to curve.

Most patients with the condition have a small curve, between 10 and 20 degrees, but Mackenzie had a 60-degree curvature in her spine – which put pressure on her lungs and caused her to be in pain from simply breathing.

The teenager sought the help of a neurosurgeon after she began losing sensation in some of her fingers and toes, but he warned her that she may never be able to cheer again.

But Mackenzie defied the odds and, just six months later, she’s back to performing handstands and pyramids, saying that she can finally move without pain for the first time in four years. 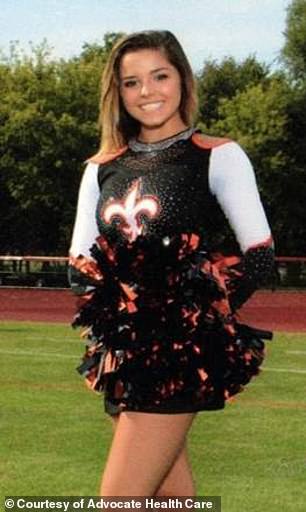 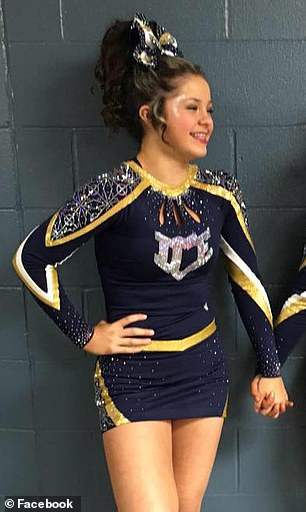 Cheerleader Mackenzie Goldsboro, 16 (left and right), of St Charles, Illinois, was diagnosed with Adolescent idiopathic scoliosis at age 12.  Her spine had a 60-degree curvature, put pressure on her lungs and caused her to be in pain from simply breathing 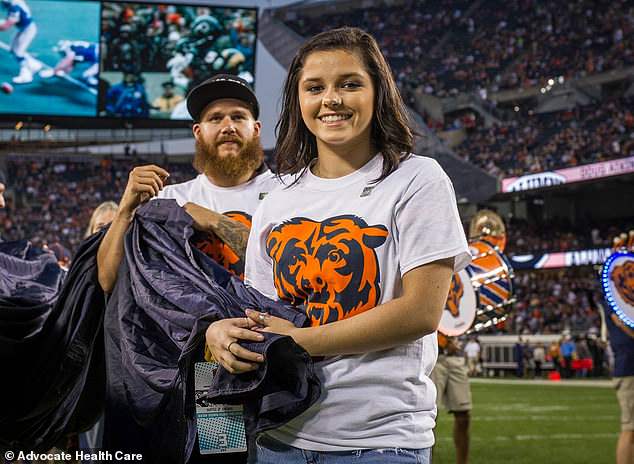 After starting to lose sensation in her fingers and toes, she sought out neurosurgeon Dr Patrick Sugrue at Advocate Good Samaritan Hospital.  Pictured: Mackenzie, right, and her brother Michael Ortiz participate in the Chicago Bears flag ceremony on September 17

AIS is an abnormal curvature of the spine that creates an elongated ‘S’ or ‘C’ shape instead of growing straight.

It is typically diagnosed in children between ages 10 and 18 while the skeleton is still growing.

The term ‘idiopathic’ means it is unknown what causes the condition, but experts believe it to be a mix of genetic and environmental factors.

According to the National Institutes of Health, AIS is the most common spinal abnormality in children, affecting between two and three percent of US children.

Mackenzie was diagnosed when she was just in seventh grade and, for the last four years, her favorite activity, cheerleading, has been causing her severe pain.

At first, interventions such as a brace – which does not correct scoliosis but prevents the spine from curving even further – helped ease her discomfort.

But the 60-degree spine curvature progressed to such a point that she began losing sensation in her fingers and toes, and moving or even breathing would cause her to be in agony.

So Mackenzie and her mother Rachel sought out Dr Patrick Sugrue, a neurosurgeon at Advocate Good Samaritan Hospital in Downers Grove.

He told her that she would need spinal fusion surgery, which involves the permanent fusion of two or more vertebrae.

The surgeon harvests small pieces of bone from the hip or pelvic bone and places them between the vertebrae.

Next, wires, rods, screws, metal cages or plates are attached to the spine, holding it in place as the vertebrae are fused. The spine then heals in this straighter position.

Both Rachel and Mackenzie said they were drawn to Dr Sugrue because he didn’t use complex medical terms to describe the surgery he would be performing.

‘He just communicates with you,’ Rachel said in an with Advocate Health Care.

‘He told her: “Let’s get you back to what you love”. He has been great throughout this whole thing – everyone we worked with was always extremely caring and would always explain the process.’

Doctors told Mackenzie there was a chance that she would never be able to return to cheerleading, which she has done since age three.

‘I’ve met most of my friends through cheerleading,’ she said in the same interview.

‘In high school, you get to really be a part of the school and be involved in everything – homecoming, games, every assembly.’ 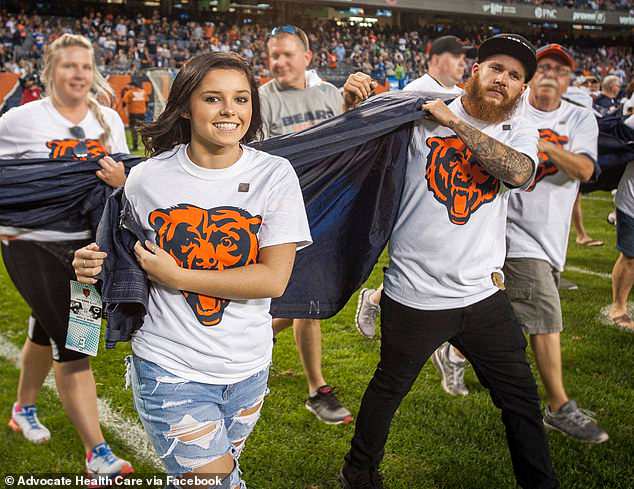 Dr Sugrue performed spinal fusion surgery, which involves the permanent fusion of two or more vertebrae, so the spine heals in a straighter position. Pictured: Mackenzie, left, and her brother Michael participate in the Chicago Bears flag ceremony on September 17 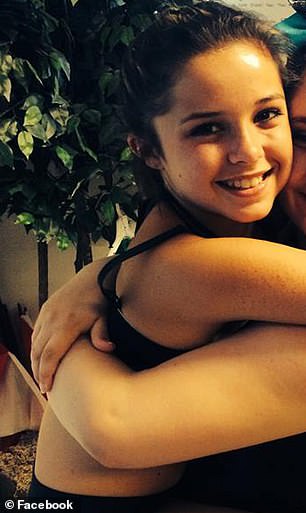 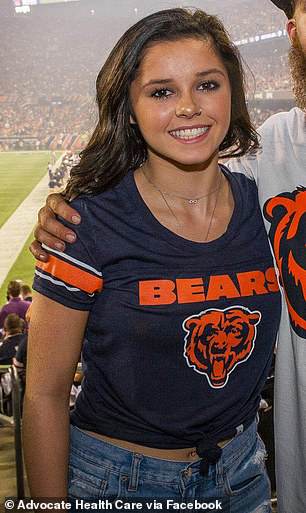 Mackenzie (left, before her surgery, and right, after her surgery) was warned that she may not be able to return to surgery after cheerleading. But, just six months later, she was back on her squad in time for homecoming weekend

The six-and-a-half-hour surgery, which took place in late March, was a success, with Mackenzie saying she saw improvements almost immediately afterwards.

When she woke up, she said she was breathing without pain for the first time in several years.

‘The first or second day after surgery, I started getting up and moving around,’ Mackenzie said.

‘None of us thought I’d be able to move that quickly, but the nurses were always there to help get me moving, shifting my posture and helping my body get used to the way it is now.’

For the first six months, no strenuous physical activity is allowed, which was frustrating for the teenager who wanted to get back to cheerleading.

Finally, after being allowed to participate in cheer events in a limited capacity, she was cleared to return to her squad in time for her high school’s homecoming week.

‘She’s a very, very positive girl. She has a great attitude and understood what this was right out of the gate,’ Dr Sugrue said in an interview with Advocate Health Care.

‘She has been very hardworking after her surgery to get back on her feet and get back to what she enjoys doing.’