Theresa May tried to shrug off Boris Johnson’s plot to humiliate her today as he prepares to burst on to the scene at Tory conference in Birmingham.

The former foreign secretary is due to make a splash when he appears at the gathering later after days of sniping from the sidelines.

A clearly tetchy PM was repeatedly grilled over her rival’s manoeuvring during a round of interviews this morning – but tried to ignore the questions by talking about her other priorities.

With a grim smile, Mrs May said she expected Mr Johnson’s speech to a fringe meeting to be a ‘lively event’.

But she insisted she was focused on improving opportunities for young people and delivering her Brexit deal.

Downing Street made a bold bid to distract from the circus around Mr Johnson today by unveiling the government’s post-Brexit immigration policies, saying EU nationals will in future be treated the same as people from all around the world.

Mrs May herself will not be watching Mr Johnson’s intervention as she is due to be doing interviews.

Meanwhile, the PM’s allies launched a series of vicious barbs at the ambitious politician – with one bald MP joking that he would be ‘washing my hair’ rather than watching Mr Johnson speak. 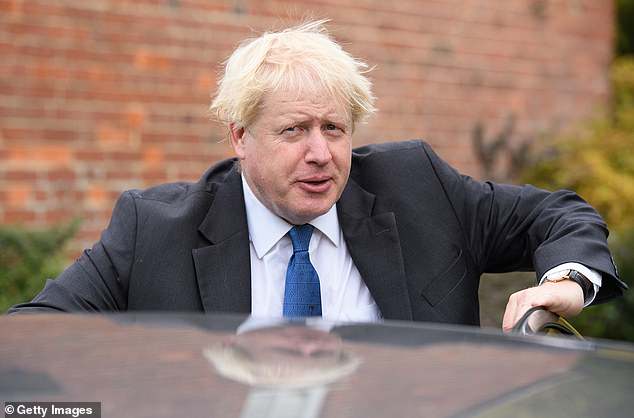 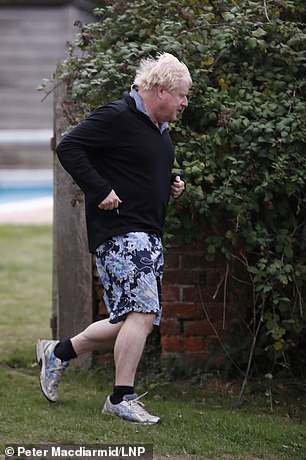 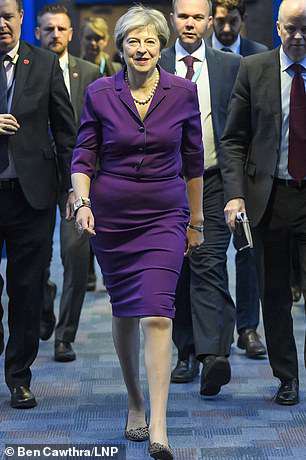 Boris Johnson (left in Oxfordshire today) will today hit back at Philip Hammond for planning to increase taxes and accuse him of abandoning ‘Conservative values’. Theresa May (right in Birmingham today) hopes to distract from his speech with new immigration policy 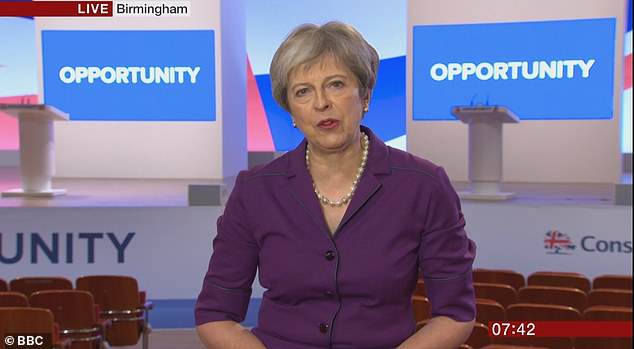 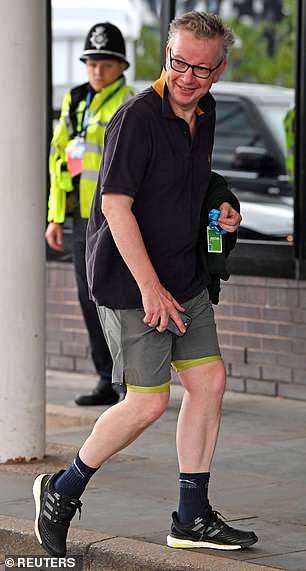 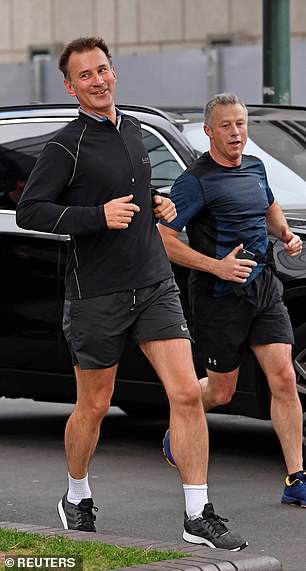 Cabinet Ministers Michael Gove (pictured left) and Jeremy Hunt (pictured right) were both out jogging today ahead of Tory Party conference. Today’s events in the main hall are set to be overshadowed by Boris Johnson’s big speech on the fringes

Asked how she had been getting on with Mr Johnson recently, she laughed and told BBC1’s Breakfast: ‘Well, I’m sure that’s going to be a very lively event this evening.

Asked about Mr Johnson’s description of her blueprint for the future relationship with the EU as ‘deranged’, Mrs May said: ‘The Chequers plan is the one plan that delivers on the vote of the British people.’

May slaps down Hunt over Soviet Union jibe at EU

Theresa May today slapped down Jeremy Hunt by publicly disowning his comparison of the EU with the Soviet Union.

The Foreign Secretary’s jibe was widely condemned by politicians and diplomats from across Europe, with particular disdain expressed in countries formerly under Soviet domination.

Lithuania’s European Commissioner Vytenis Andriukaitis, who was born in a Siberian labour camp after his family’s deportation by Stalin and was later arrested by the KGB secret police as a dissident, offered to give the Foreign Secretary a history lesson.

Estonia’s ambassador to London, Tiina Intelmann, branded Mr Hunt’s comments ‘insulting’ to those who lived under the Soviets before the collapse of the regime in 1991.

In his speech to the Conservative Party conference in Birmingham on Sunday, Mr Hunt accused Brussels of seeking to ‘punish’ Britain for wanting to leave the EU and compared it to the USSR trying to stop its citizens leaving.

Asked whether she agreed with Mr Hunt’s position, Mrs May told BBC1’s Breakfast: ‘As I sit around that table in the European Union, there are countries there who used to be part of the Soviet Union. They are now democratic countries.

‘I can tell you that the two organisations are not the same.’

She added: ‘I think it’s a good deal for the UK. If the European Union have concerns about it, we need to hear what those concerns are.’

Mrs May sidestepped the question of how she felt to see Mr Johnson attempting to undermine her, telling Today: ‘At this conference, what I feel is that I and this Government and this party are getting on with the important job of getting a good deal for the UK when we leave the EU.

‘But also working on the opportunities for this country and people in this country when we leave the EU. That’s what I’m focusing on.’

In his speech Mr  will also hit back at  for planning to increase taxes and accuse him of abandoning ‘Conservative values’.

The Chancellor sent a clear signal yesterday that next month’s Budget will include tax rises to pay for a multi-billion pound planned rise in NHS spending.

But Mr Johnson will return fire, saying the party should ‘follow our conservative instincts’ and focus on core Tory issues such as law and order and tax cuts to beat Labour at the next election.

‘In what allies openly described as an alternative leader’s speech, he will suggest the party has moved too far to the Left and should instead take ‘basic conservative ideas and fit them to the problems of today’.

Couched as an attack on Mr Corbyn, Mr Johnson’s speech contains a series of barely disguised barbs at the Prime Minister and her Chancellor.

He will say the Tories must not ‘lose our faith in competition and choice and markets’ or follow the Labour leader and ‘treat capitalism as a kind of boo word’.

Mr Johnson will tell the Conservative Home event: ‘We can’t lose our faith in competition and choice and markets but we should restate the truth that there is simply no other system that is so miraculously successful in satisfying human wants and needs.

‘We should set our taxes to stimulate investment and growth.

‘We should be constantly aiming not to increase but to cut taxes. It is the conservative approach that gets things done so let’s follow our conservative instincts.’ 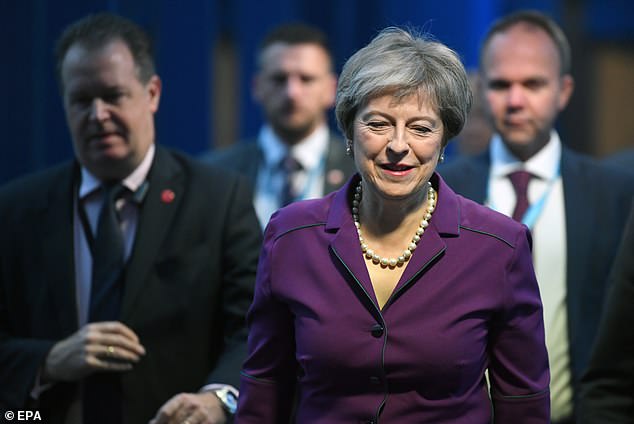 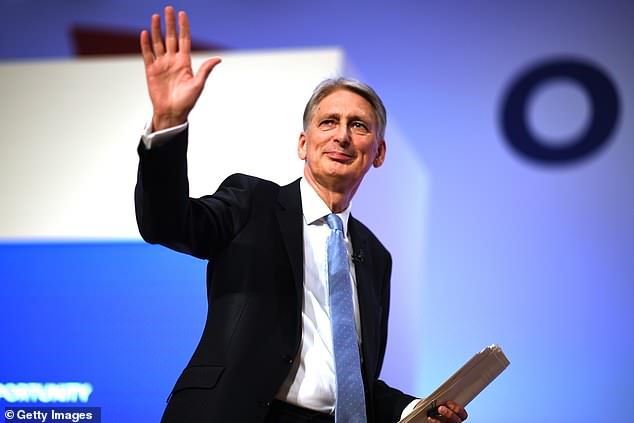 Mr Johnson’s tough line on Brexit and support for traditional Tory values has made him a favourite with the party’s grass roots.

But there has been a notable backlash against the ex-minister over his trouble-making.

Former trade minister Lord Digby Jones was applauded when he condemned Mr Johnson as ‘irrelevant and offensive’ from the conference stage on Sunday.

Cabinet ministers told Mailonline Mr Johnson had not been doing himself any favours with his obvious trouble-making. 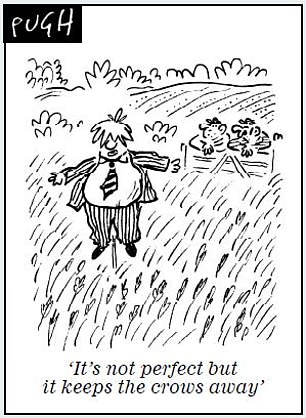 ‘It’s not perfect but it keeps the crows away’

One Brexiteer minister said: ‘Boris is not being helpful. He is just wrong on this and he has misjudged it.’

Another pointed out the contrast with the ‘respectful’ way David Davis had conducted himself since resigning in protest at the Chequers plan.

Asked if he would be watching Mr Johnson speak today, former deputy PM Damian Green – who is bald – said he would be ‘washing my hair’.

John Howell, who took over from Mr Johnson as Tory MP for Henley, told The Sun: ‘As far as I’m concerned, Boris can just f*** off.’

Mr Johnson was also accused yesterday of mocking the PM by running through a ‘field of wheat’ near his Oxfordshire home.

It appeared to be a reference to an interview Mrs May gave last year in which she said the naughtiest thing she had ever done as a child was running ‘through the fields of wheat’ to the annoyance of local farmers.

The image of the former foreign secretary led to claims he was ‘trolling’ the PM ahead of his conference speech today. Mr Johnson’s aides denied this, however, saying he was just out for his morning run.

Online commentators pointed out the ‘field’ appeared to be a meadow and was not planted with wheat.

GPs are prescribing activities such as bingo to 'frequent visitors'
Sprout pizza? Ho-ho-NO! We try the ghastliest festive grub so you don't have to
Father, 41, who was shot dead in his £80,000 Porsche while picking up his son from school is named
Ebola death toll tops 400 in Democratic Republic of Congo
Brexit: Jeremy Corbyn backs second referendum
Human rights lawyers fury over deportations to Jamaica
E-cigarettes are just as likely to give you a sickly smoker's cough
Lonely leopard moves in to former zookeeper's home after missing him when he left his job