They tied the knot in the first ever wedding in front of friends, family and reality TV co-stars in Essex last month.

And Olivia Buckland, 24, and Alex Bowen, 26, looked utterly smitten as they enjoyed a tender kiss while soaking up the sun on the second leg of their lavish honeymoon in the Maldives on Sunday. 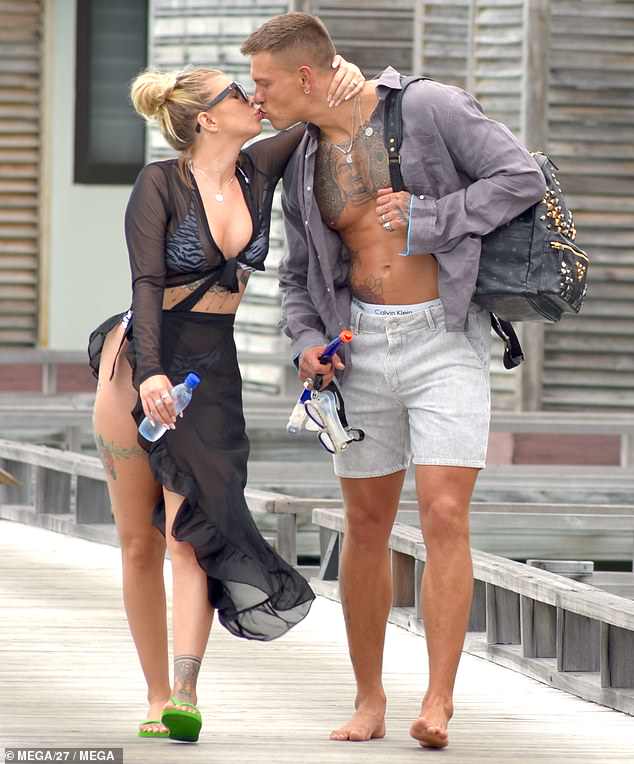 Newlyweds: Olivia Buckland, 24, and Alex Bowen, 26, looked smitten as they enjoyed a tender kiss while soaking up the sun on the second leg of their honeymoon in the Maldives on Sunday

The Love Island 2016 star’s many tattoos were shown off as her lithe limbs were on full display, with a pair of bright green flip flops adding to the outfit.

The Essex-based beauty tied her blonde locks back into a casual high bun, as she covered up her face her stylish black sunglasses.

Alex showed off his bulging muscles in denim shorts and an unbuttoned shirt power blue shirt, which displayed a hint of toned torso.

The former scaffolder clung onto a pair of goggles and a snorkel as he strolled along looking loved up with his new bride. 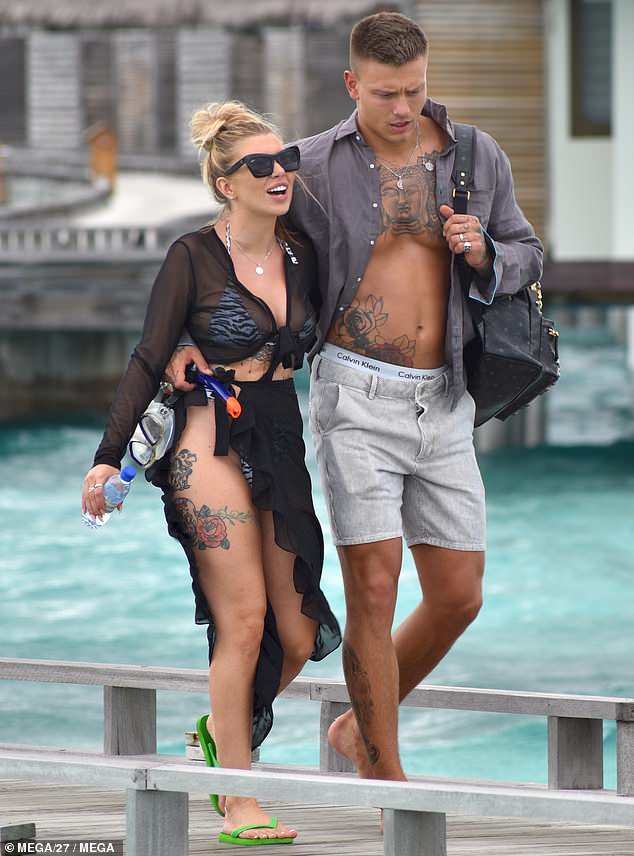 Emulate Olivia in a sheer sarong from Missguided

Whilst honeymooning in the Maldives with her new husband, Olivia Buckland shows off her fabulous figure in a tie side, sheer sarong from Missguided.

This style is simple yet stunning, with the ruffle detail adding extra playful vibes to this look. You can never go wrong with black, as its slimming and goes with just about everything and is perfect for when the sun goes in.

We suggest you add this sassy sarong to your next holiday haul, and it will definitely become one of your favorites. A perfect little skirt to throw on and jazz up any beach outfit.

If you want to channel Olivia’s Maldives getaway look, click (right) to buy! Alternatively check out the carousel below for more classy cover-ups. We have our eye on the bargain we found at Miss pap and also the Boohoo satin tie sarong…

Olivia and Alex tied the knot last month at Gosfield Hall, which boasts 10 acres of elegant grounds, in the blonde beauty’s native Essex on September 15.

The reality TV pair initially jetted off to Sri Lanka just hours after their lavish reception in Essex, before moving onto the second leg of their honeymoon in the Maldives.

The couple first met on the 2016 series of Love Island, in which they starred alongside the likes of Cara De La Hoyde, Nathan Massey, Zara Holland, Tina Stinnes, Malin Andersson and the late Sophie Gradon.

Olivia and Alex came in second place behind Cara and her fiancé Nathan Massey, and moved in together in Essex in August 2016.

Alex popped the question during a romantic trip to New York that December after just five months of dating. 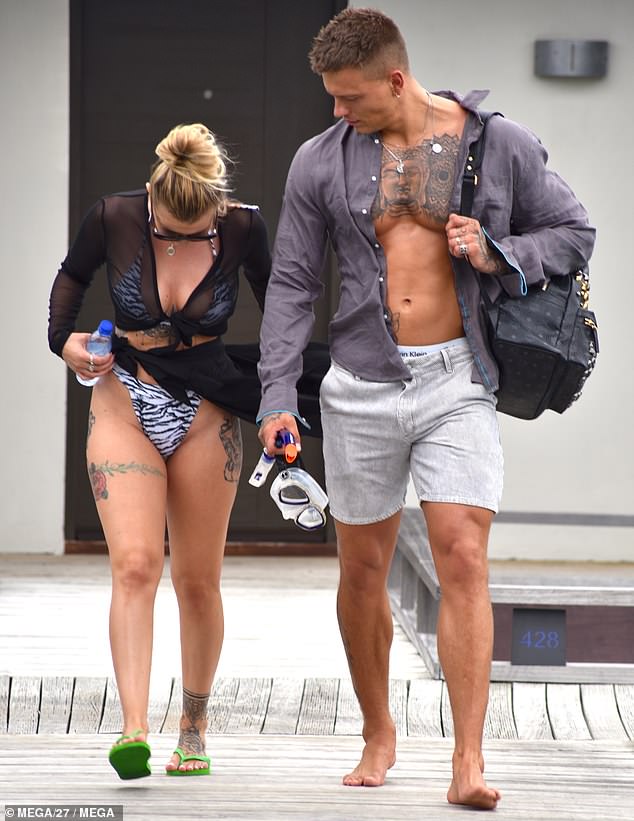 Martial bliss: The Essex-based beauty tied her blonde locks back into a casual high bun, as she covered up her face her stylish black sunglasses

The wedding hasn’t been without drama as it was revealed Olivia had a row with her former best friend and Love Island co-star Cara over bridesmaid duties after Cara became a mother to son Freddie.

Touching on the dramatic events, she told OK! magazine last week: ‘There are two sides to every story. I guess we haven’t been that close for a while and I hadn’t seen it.

‘When I asked her to be my bridesmaid I thought we were close, and then sadly we drifted apart, there was no big fallout or anything. 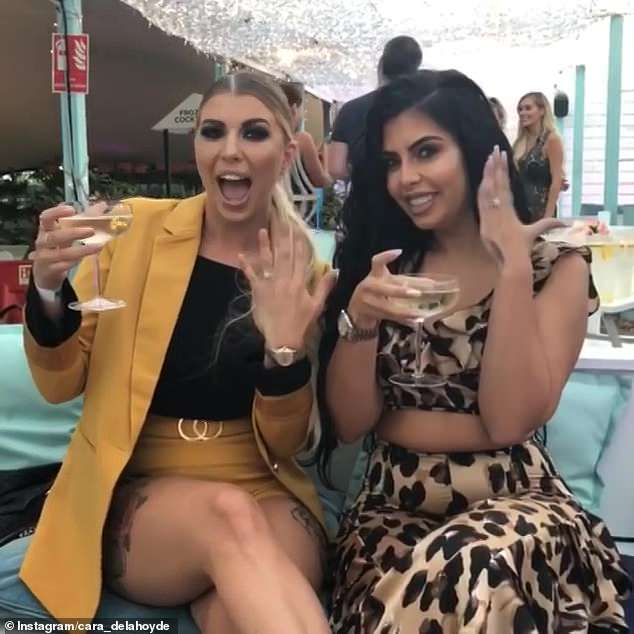 Former pals: Olivia and Alex came in second place behind Cara De La Hoyde (pictured) and her fiancé Nathan Massey in the 2016 series of Love Island

‘I’ve not really commented on the stories [until this point], mainly because it is really upsetting, and I don’t think it’s appropriate involving the media.

‘I hope now the wedding is over it just goes away, and everyone can draw a line under it.

‘Luckily there was so much going on and it was such a perfect day I didn’t get a chance to think about it.’ 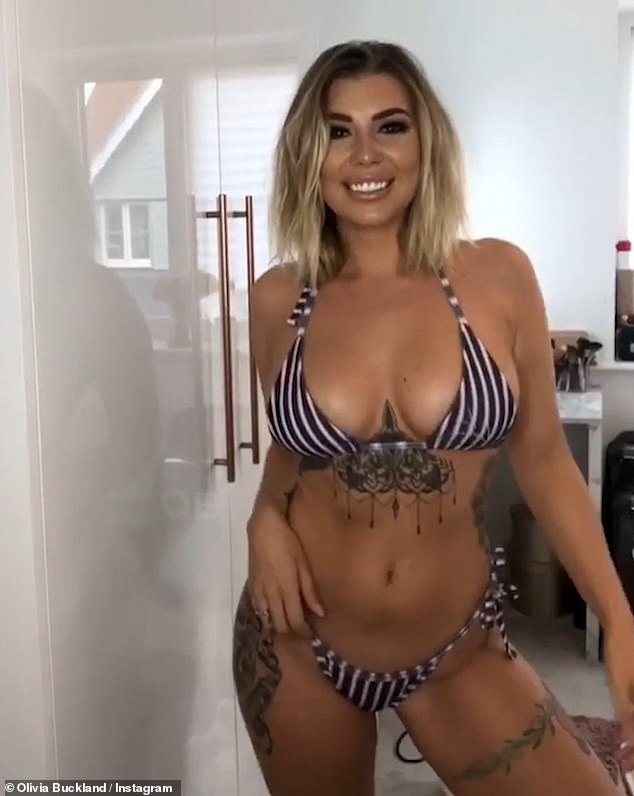 Still smiling: The wedding hasn’t been without drama as it was revealed Olivia had a row with her former best friend and Love Island co-star Cara over bridesmaid duties