Jacqueline Jossa and Dan Osborne have revealed that their marriage is ‘stronger than ever’, following their split in May — just 11 months after tying the knot.

In the latest edition of magazine, the couple pose with their two daughters — Ella, three, and three-month-old Mia — as they gush about rekindling their romance following Dan’s recent stint on Celebrity Big Brother.

However, EastEnders star Jacqueline, 25, has admitted that she found it ‘hard’ to watch her 27-year-old husband interact with Gabby Allen on the reality show, amid rumours they’d had a fling — which all parties have since vehemently denied. 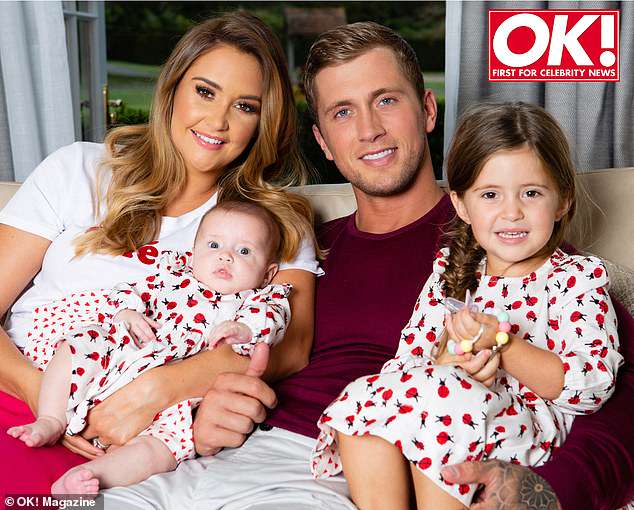 Strong: Jacqueline Jossa and Dan Osborne revealed that their marriage is ‘stronger than ever’, following their split in May, as they posed with daughters Ella, three, and three-month-old Mia

Dan, who also has a four-year-old son named Teddy from a previous relationship, told the publication: It’s no secret that we went through a bad patch, but we’re back together and things are really good. We split up earlier this year but started to get back on track when Mia was born in June and it’s better than ever between us now.’

Jacqueline, who wore her sparkling wedding ring for the family cover shoot, added: ‘Our wedding rings are firmly back on and we’re stronger than ever.’

However, while Dan said that his time in the Celebrity Big Brother house gave him a ‘newfound love and respect’ for his wife and made him want to ‘make things work’, Jacqueline admitted that seeing him onscreen with Gabby was a tough experience. 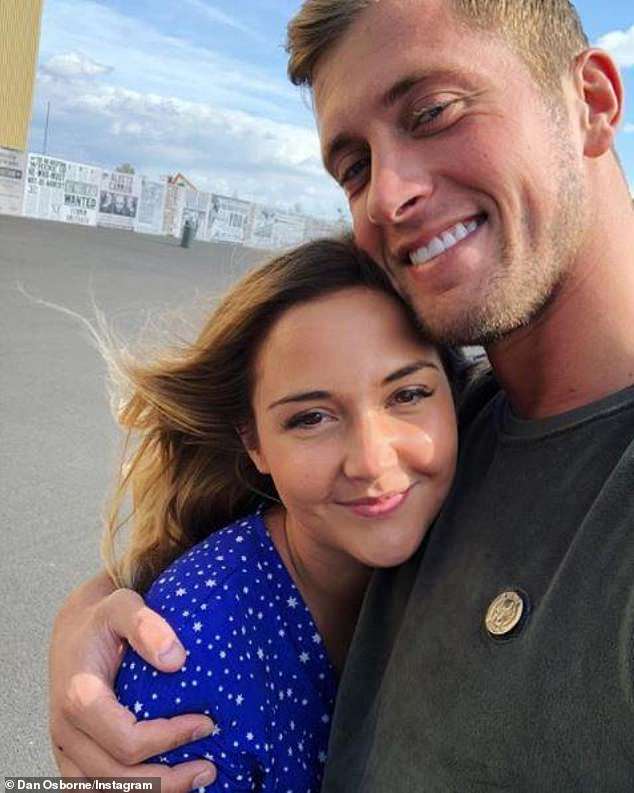 Love: The couple shocked fans when they announced their split just 11 months after tying the knot, but they’ve since admitted that their affection for one another continued to grow

She said: ‘I tried to be supportive of Daniel while he was in the house but it was hard when I saw him talking about our problems or spending time with Gabby. I know they’re just friends but it wasn’t nice for me to watch because I knew what everyone would be saying about their relationship.’

Explained Dan: ‘At first I tried really hard to avoid being near her because I knew what people would say, but it’s impossible to keep that up for a whole month.

‘We were constantly in the same room as each other – and the house isn’t as big as it looks on TV – and I soon realised I couldn’t avoid her forever. I went into the house to be myself and I couldn’t do that if I was going to be off with Gabby.

‘I get on really well with her, we’re good friends, so as far as I’m concerned we had nothing to feel awkward about.’

Read the Jacqueline and Dan’s full interview in the latest edition of magazine, out now. 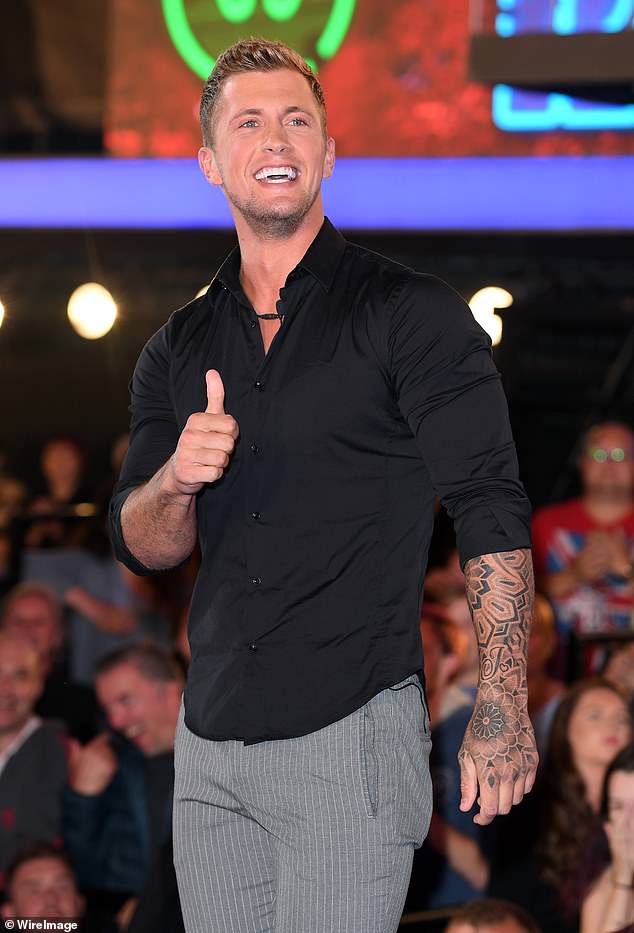 Love and respect: Dan admitted to OK! that he had a ‘newfound love and respect’ for his wife during his recent stint on Celebrity Big Brother, prompting him to want to try again 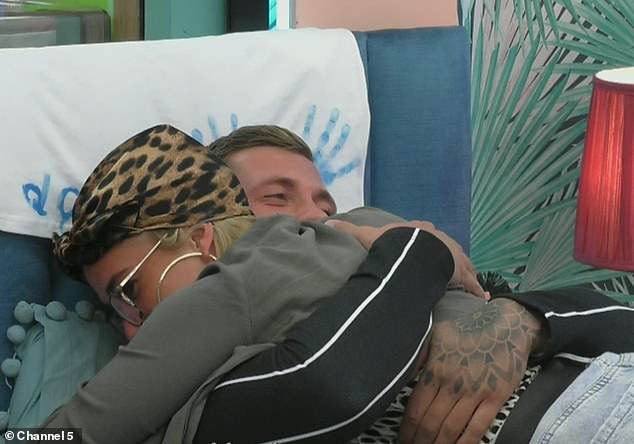 Tough watch: However, Jacqueline admitted that it was ‘hard’ watching her husband interact with Gabby Allen in the Big Brother house, following false rumours of an affair

Dan and Jacqueline have weathered a rocky few months after they announced the news they had split up in May.

The reality star previously divulged they had decided to split at the time because a series of constant rows left them unhappy.

Making things worse were rumours that Dan had embarked on a fair with former Love Island star Gabby, although the pair insisted they were just friends.

However, now Dan insisted Celebrity Big Brother has saved his marriage and made him realise what he had been doing wrong. 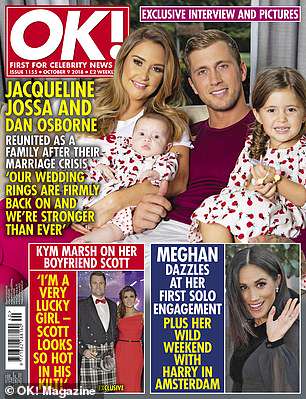 Out now: Read the couple’s full interview in the latest edition of OK! magazine, out now

The doting dad shared his time in the star-studded compound gave him time to reflect on the state of his marriage and how lucky he was to have a beautiful wife.

Dan had previously told : ‘Jacqueline is a beautiful woman, great mum and I think it made me really have time to reflect on that. It made me appreciate her.

‘My time in Big Brother made me realise the things that I was doing wrong and how I was not helping my situation or my marriage. It definitely made me appreciate what I have.’

The married couple tied the knot in a romantic ceremony at Cheshire manor house in June of last year.

Dan also gushed over how astonishing Jacqueline looked after his wife lost one and a half stone just three months following the birth of their daughter.

He previously told  magazine: ‘She looks incredible. I’m happy that she’s feeling confident again. I know that. I can see it in her. She’s doing really well and she is sticking to her diet and her fitness regime.’ 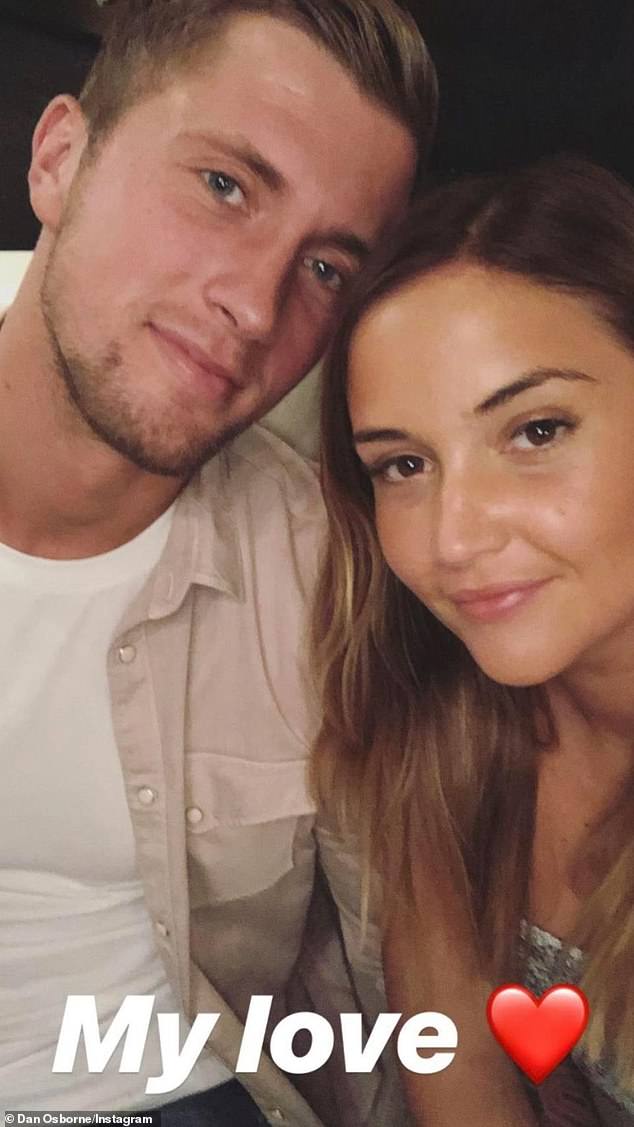 Rough patch: Reality star Dan previously divulged they had decided to split at the time because a series of constant rows left them unhappy

Madonna celebrates son Rocco Ritchie's 18th birthday with quirky snap
Princess Eugenie's wedding: Pixie Geldof is the first star to arrive as she sports caped gown
Strictly star AJ Pritchard is beaten up in nightclub brawl
Chanel Iman didn't know Fyre Festival documentaries existed...as model says she was kept 'in dark'
Miley Cyrus goes TOPLESS as she and Emily Ratajkowski lead celebrity Easter celebrations
Love Island: Tommy sends viewers into a spin as he reveals he was born in 1999
Cassidy McGill has found Mr Right, and she loves him more than bread
Madonna keeps a low profile in hoodie and shades ahead of her latest Madame X performance