On a day dedicated to haute couture it was somewhat inevitable that two of Britain’s biggest style icons led the front row glamour as Stella McCartney unveiled her latest collection at Paris Fashion Week.

Joining an array of guests at the bi-annual event, Alexa Chung and Poppy Delevingne commanded attention as they took to their seats ahead of the Spring-Summer 2019 catwalk show on Monday morning.

Opting for a sophisticated black knitted blazer over a thigh-skimming cream minidress, Poppy, 32, caught the eye as she posed for photos before making her way inside the cavernous Palais Garnier opera house.

Leading the way: On a day dedicated to haute couture it was somewhat inevitable that style icons Alexa Chung and Poppy Delevingne led the front row glamour as Stella McCartney unveiled her latest collection at Paris Fashion Week on Monday

Revealing her nicely toned legs, Poppy’s appearance proved to be a high point after she climbed from the rear of her car alongside fellow guest Lady Mary Charteris.

Sheer plastic heels gave her ensemble a distinctive flourish, while her make-up was selected from a natural colour palette.

Meanwhile, Alexa looked pretty in pink in an exquisite pastel-coloured sequinned and beaded floor-length dress, which had lace detailing on the neckline. 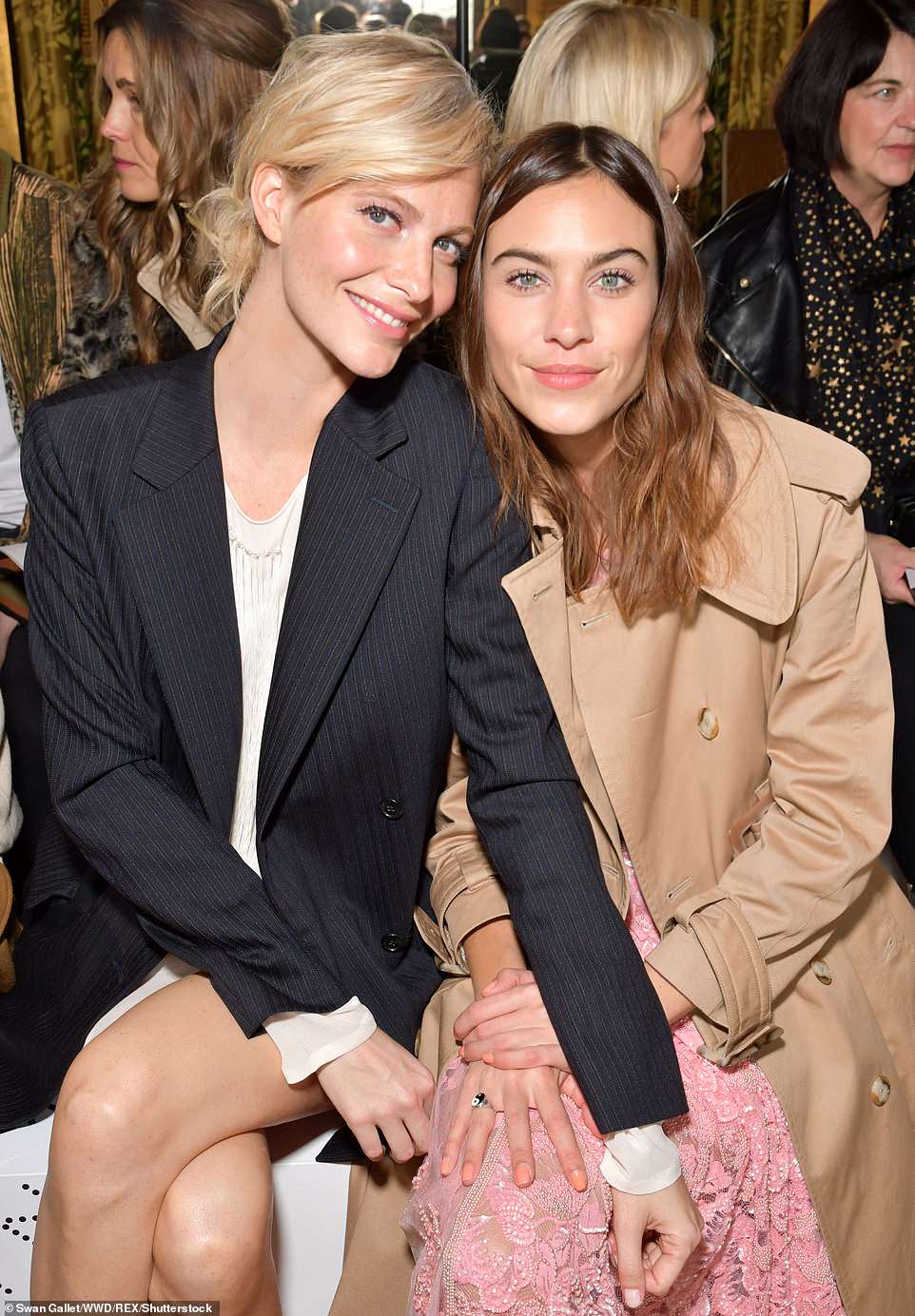 Close: The two friends were in high spirits as they occupied their seats inside the cavernous Palais Garnier opera house

Looking good: Opting for a sophisticated black knitted blazer over a thigh-skimming cream minidress, Poppy, 32, caught the eye, while Alexa looked pretty in pink in an exquisite pastel-coloured sequinned and beaded floor-length dress

Shop the current collection at NET-A-PORTER.COM

Paris Fashion Week is in full flow and to kick start the final week it was Stella McCartney’s turn to show off her new collection.

Full of everything from patterned jumpsuits, to the traditional McCartney tailored suit and even pops of colour and tie-dye, we’re excited for next summer. But probably not as much as Alexa Chung, who was no doubt eyeing-up the collection to add to her fashionable wardrobe come summer.

The model joined the likes of Poppy Delevingne and Lady Mary Charteris on the FROW, but made sure she stood out in the designer’s lace dress from the FW18 collection.

In pretty pastel pink, it’s a statement piece in comparison to the usual tones of mustard or burnt orange normally associated with the autumn season. And, as Alexa has proven, works just as well with trainers as it probably will with heels, so don’t just save your lace dress for the evening, ladies!

Sadly, this dress isn’t available just yet but shop the new collection at NET-A-PORTER (click right) or, better still, browse our edit below to replicate Alexa’s look for as little as £33. 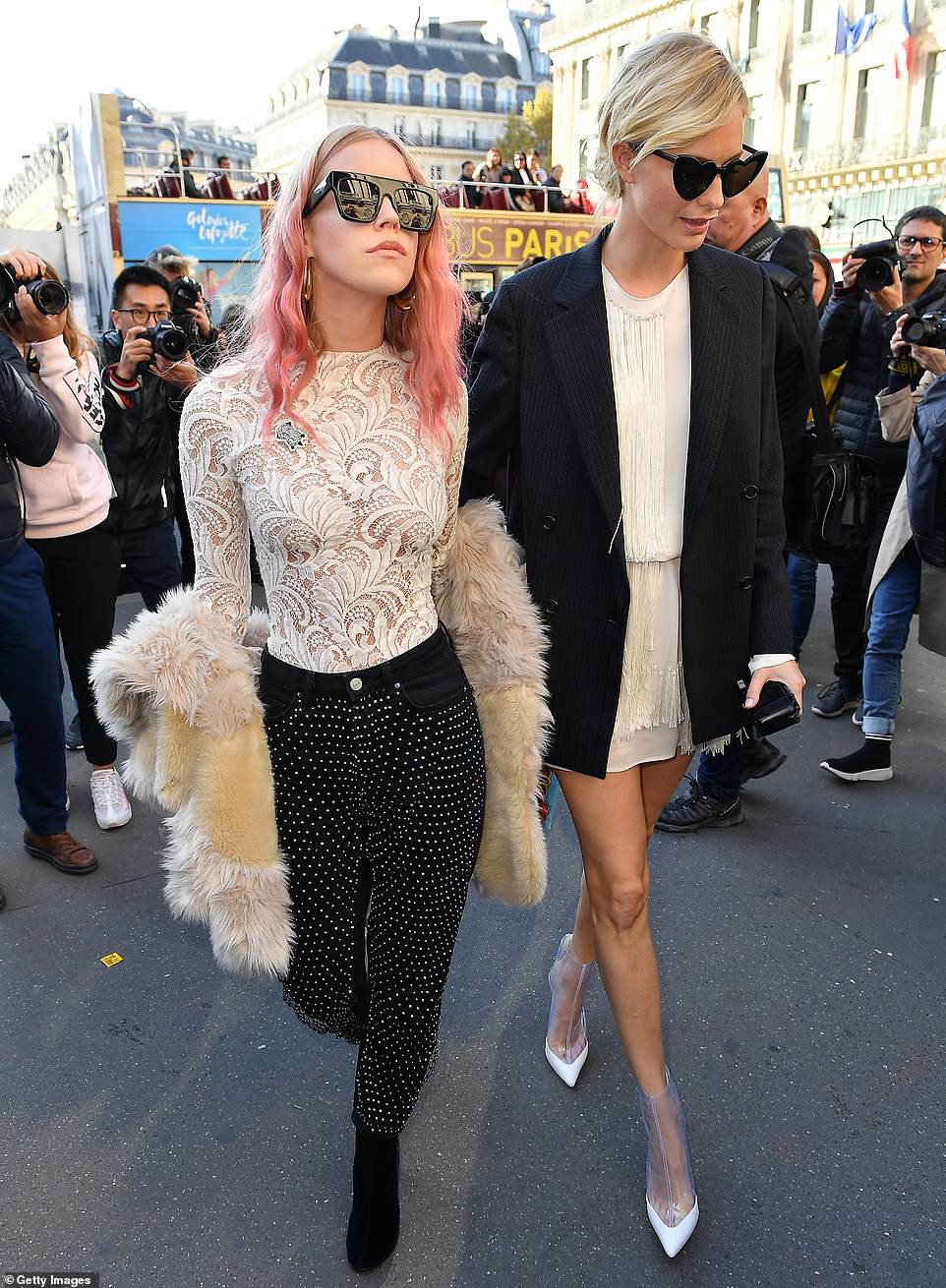 Incoming: Poppy, the older sister of model and actress Cara Delevigne, was joined by Lady Mary Charteris as she made her way inside

Opting for more casual footwear, the fashion writer and presenter, 34, teamed the item of clothing with a pair of pearl-coloured lace up trainers.

As always, Alexa styled her hair with a simple centre parting, while her own tastefully applied make-up served to accentuate her delicately proportioned features.

She layered her ensemble with a beige trench coat with tortoise shell buttons and fastening, she also added a black handbag. 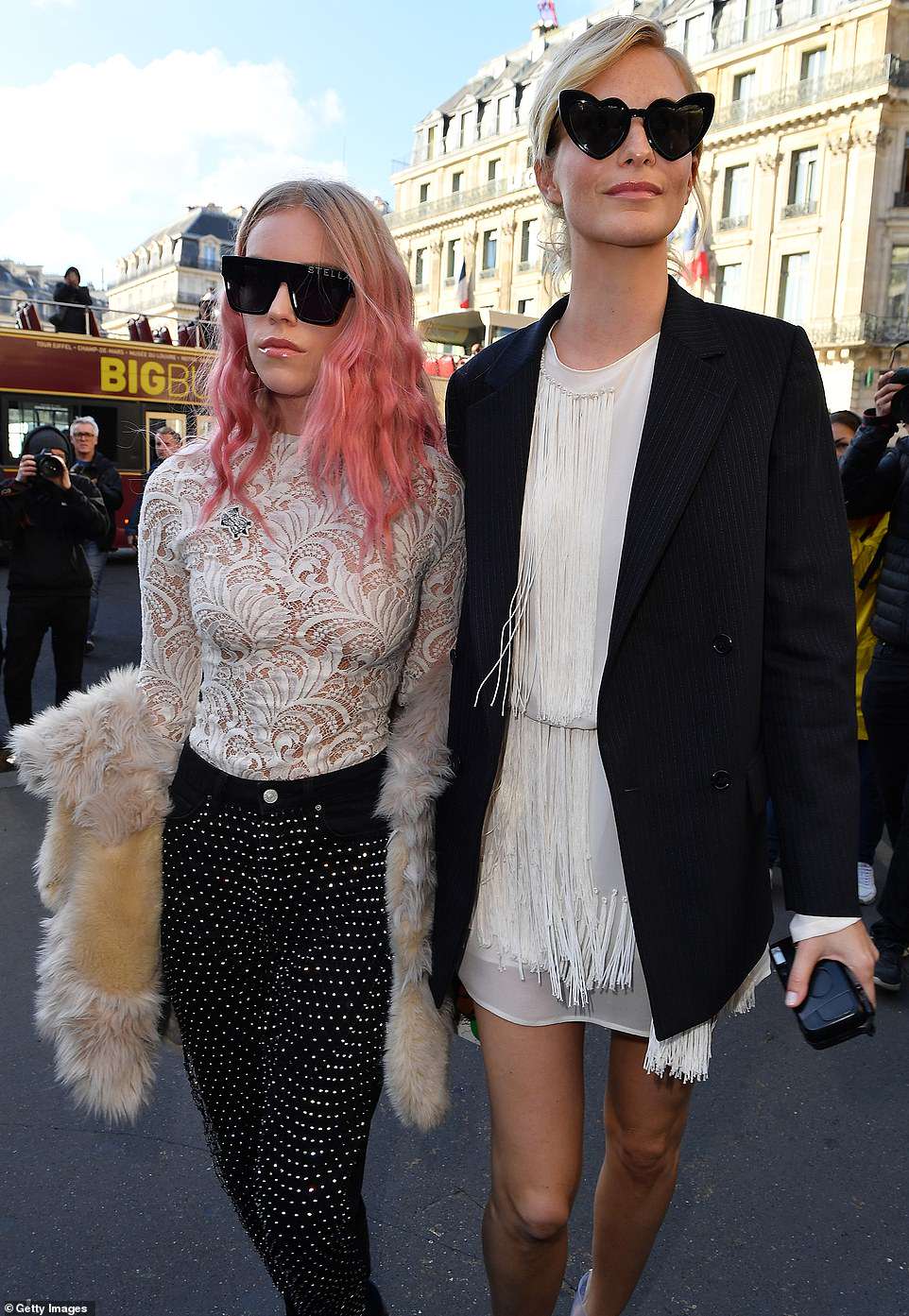 Shady: Poppy accessorised with quirky love-heart shaped sunglasses as she made her way past onlookers in the French capital on Monday

Incoming: Alexa wore a tan leather Mackintosh over her pink dress as she made her own entrance ahead of the runway show 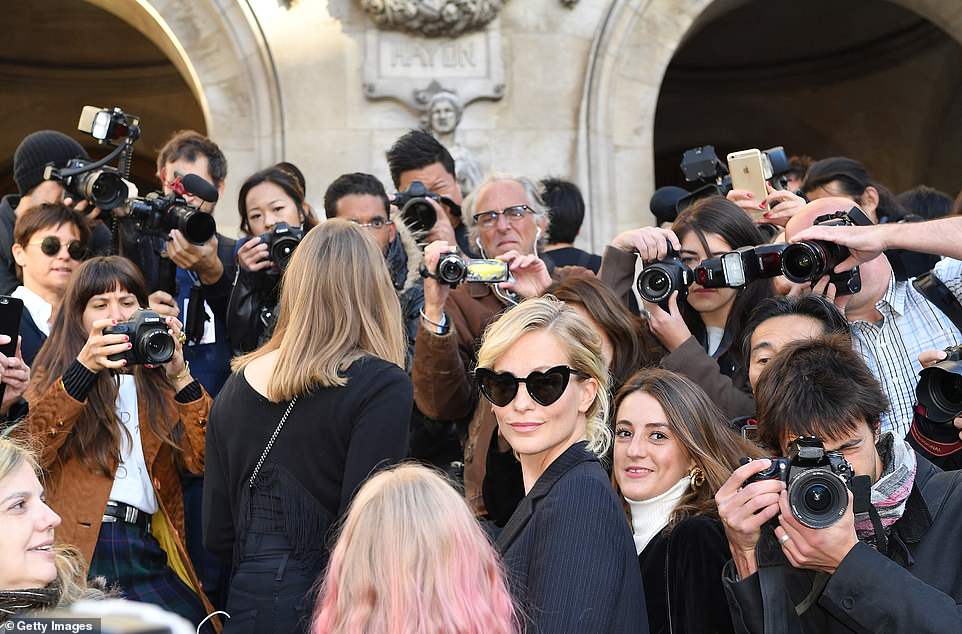 Swarmed: Poppy found herself surrounded by a throng of photographers as she made her way inside the Palais Garnier opera house

Lady Mary, who accompanied Poppy following their arrival on Monday morning, was equally on-trend in a sem-sheer lace top and patterned, high-slung trousers.

The model and DJ with aristocratic parents, 31, styled her signature pink locks into into a wavy tousled hairdo as she added a slick of make-up.

The group were on hand to watch in-demand model Kaia Gerber continue to impress as she led the catwalk on Monday. 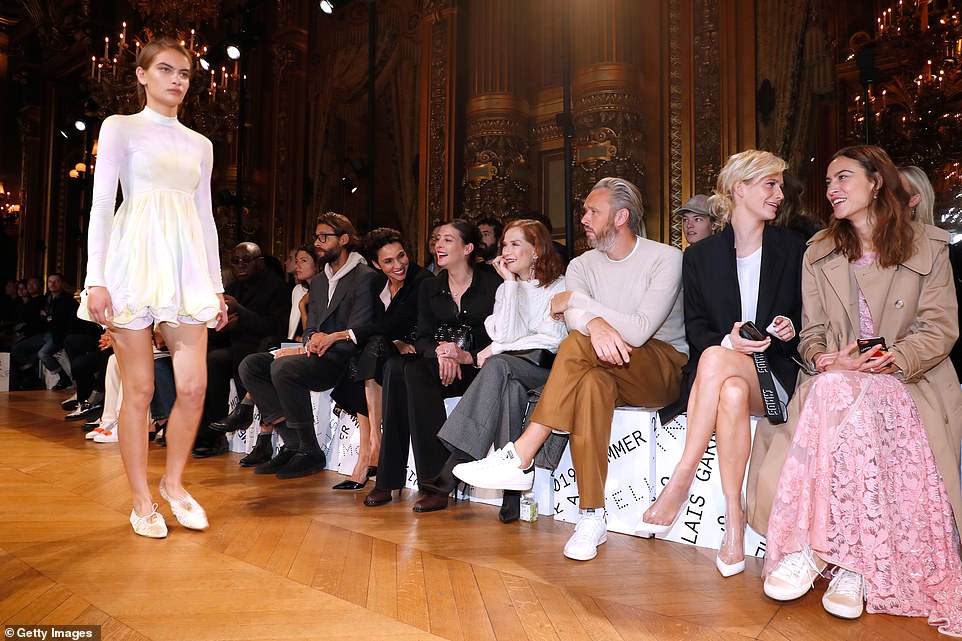 Here we go: Poppy and Alexa shared a joke as models filed down the catwalk at the Paris Fashion Week event 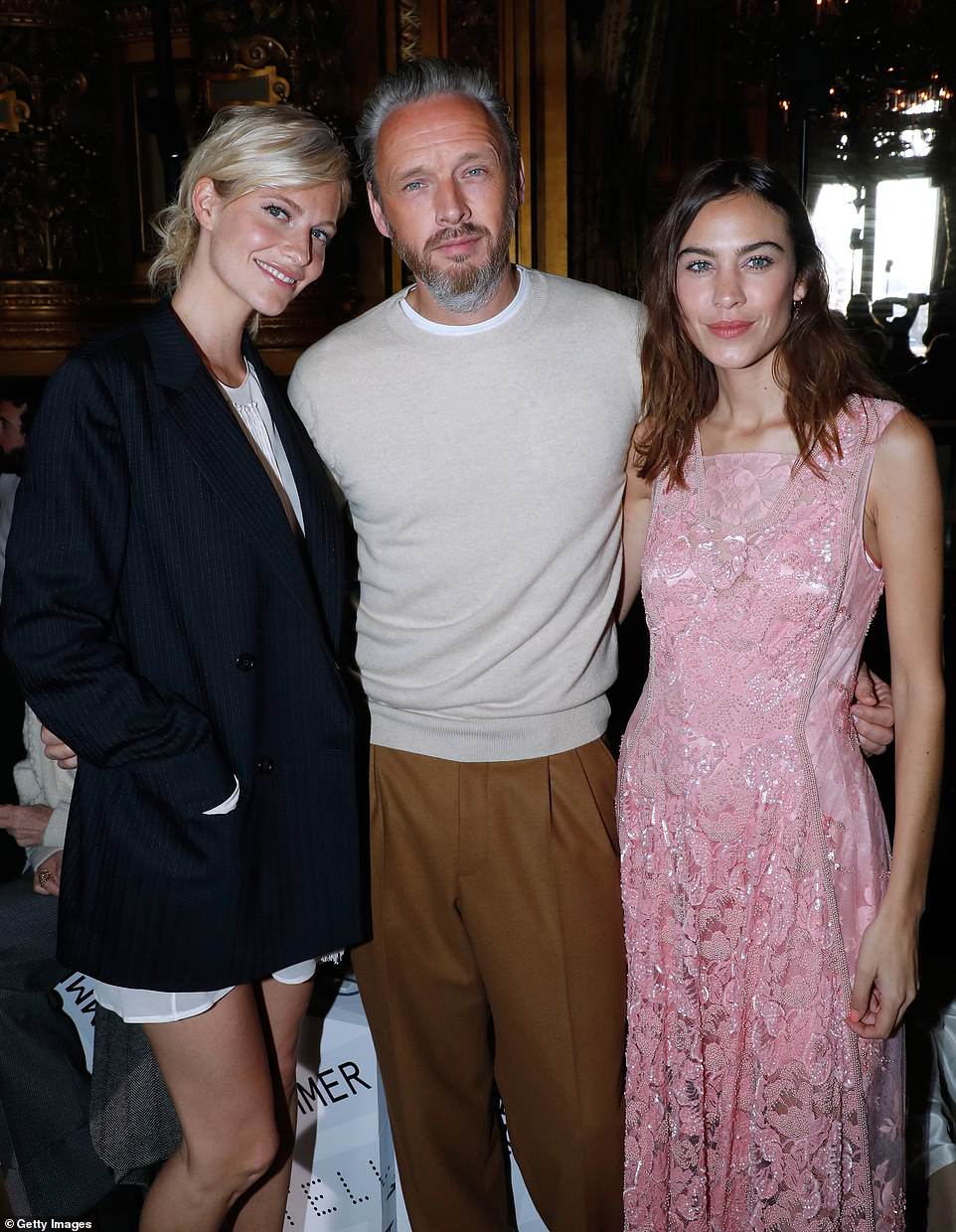 In good company: Poppy and Alexa were joined on the front row by fashion designer Stella’s husband, Alasdhair Willis 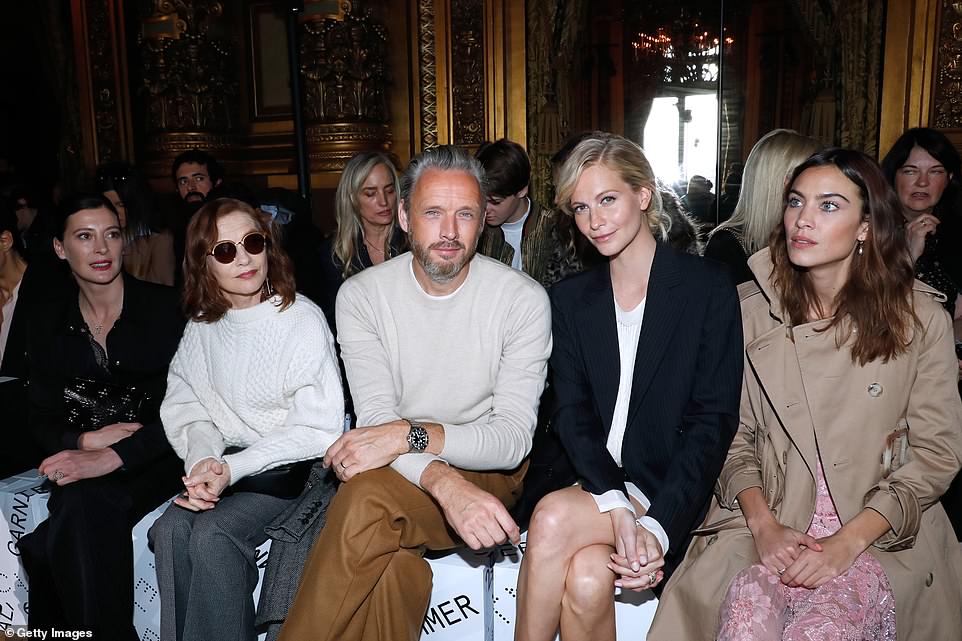 The teenager joined several other models as she walked the runway inside the jaw-dropping venue, which had multiple candle-lit chandeliers and a ceiling featuring 19th century paintings from Marc Chagall, Clairin and Paul Baudry.

The designer, 47, appeared in good spirits at her spectacular show as she flashed a grin and waved to the audience before making her way onto the runway. 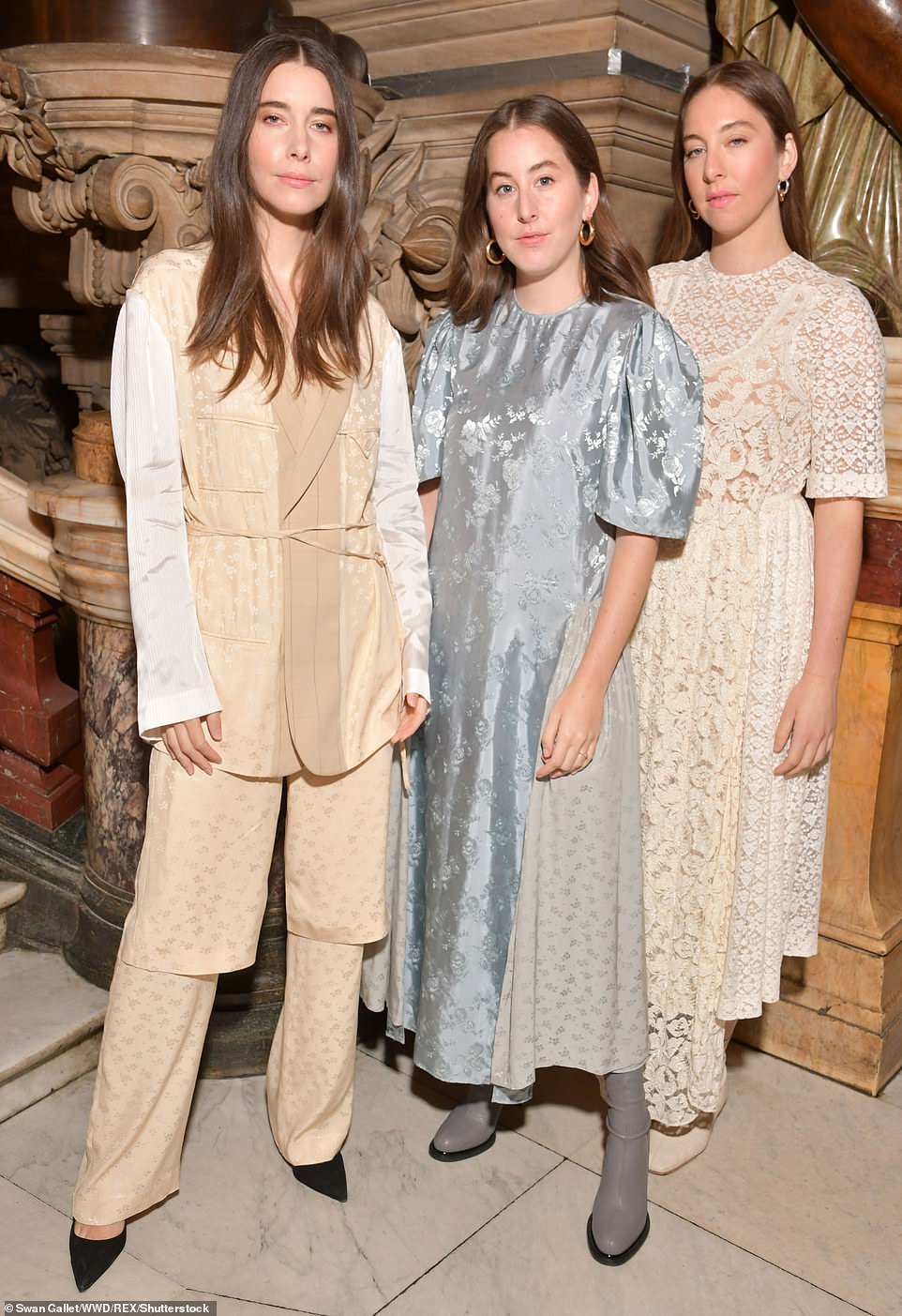 Hitting all the right notes: Sisters Danielle, Alana and Este of the band Haim were also on hand to watch the presentation 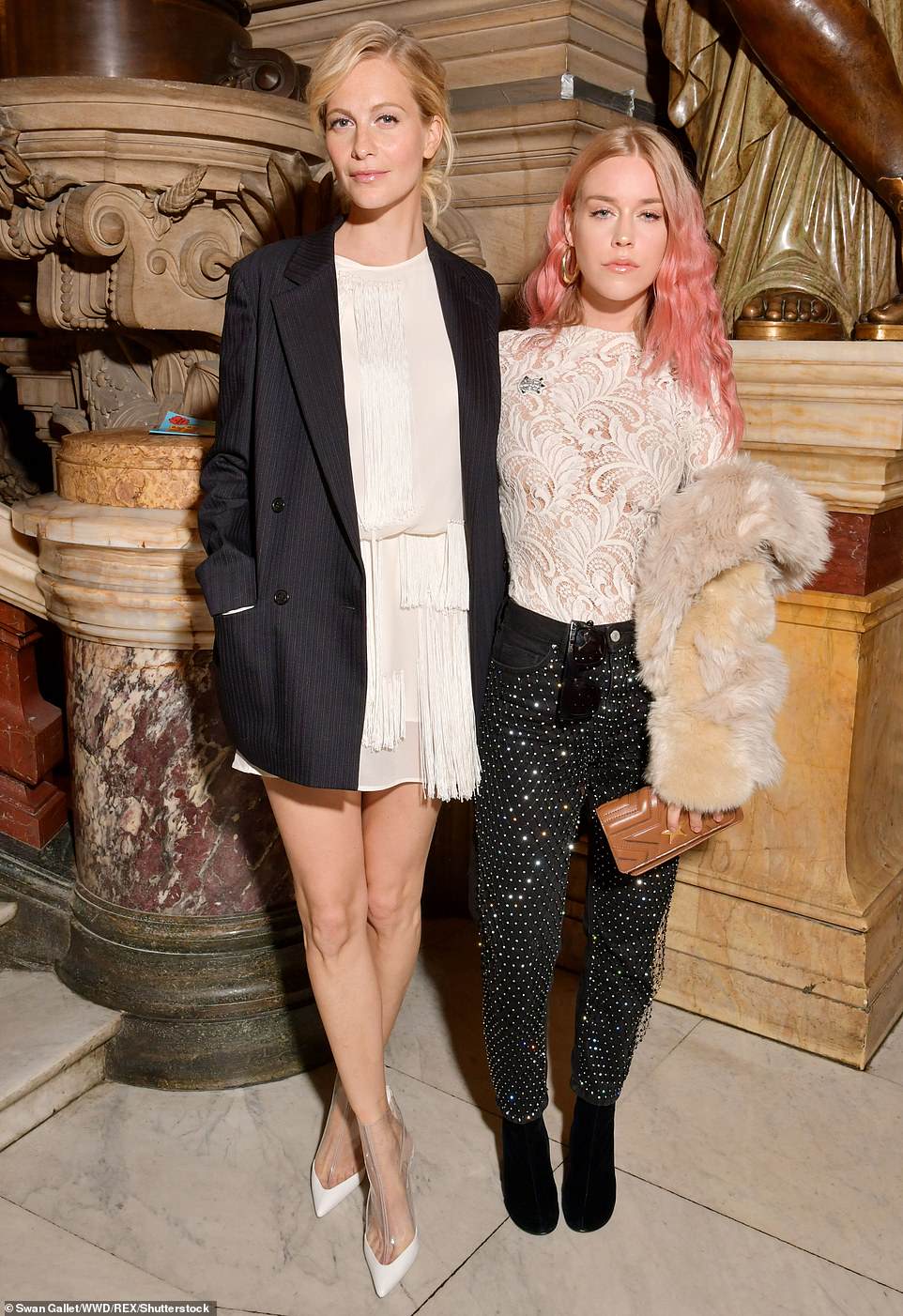 Hard to miss: Lady Mary, who accompanied Poppy following their arrival on Monday morning, was equally on-trend in a sem-sheer lace top and patterned, high-slung trousers

Girlband Haim, made up of sisters Este, Danielle and Alana, were also present at the runway event as they showed off their natural flair for fashion.

Tie-dye appeared to be a predominant theme at the Stella McCartney show, as well as Kaia rocking the bohemian print, several other models wore the design too. 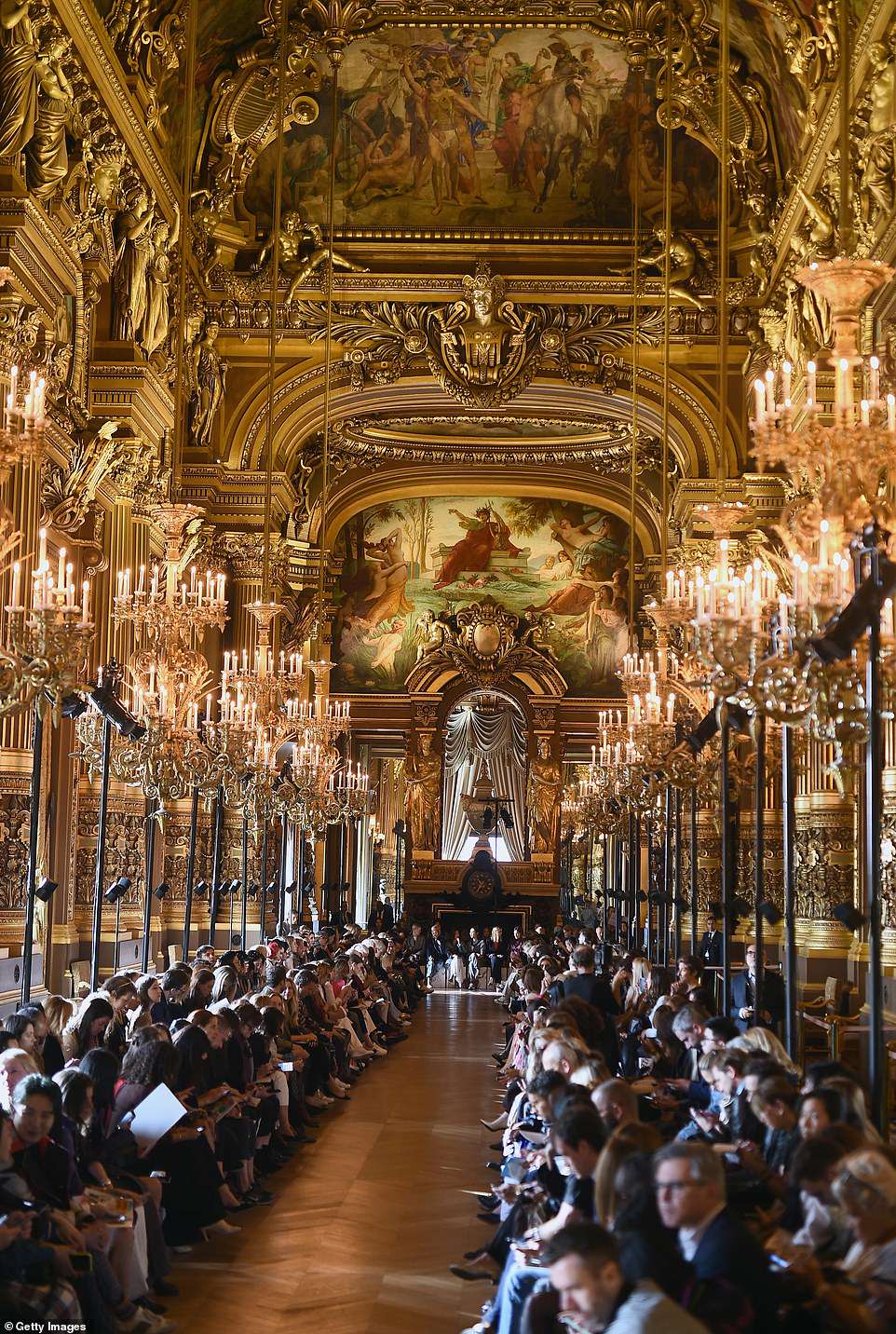 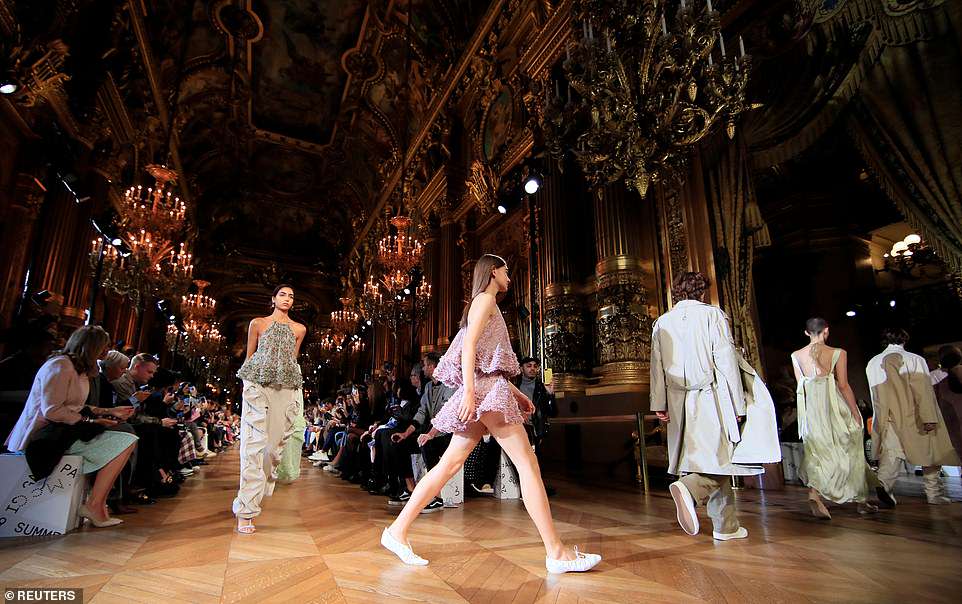 On the march: A troupe of models filed past those in attendance at the special event in the French capital