Three youths including a 14-year-old schoolboy were facing attempted murder charges in today following the savage gang attack of another teenager.

A horror video shows a mob allegedly trying to kill their 17-year-old victim in broad daylight on a council estate in the northern Paris suburbs.

Makeshift weapons including hockey sticks, petanque balls and a crutch were used to repeatedly beat the youth around the head and upper body. 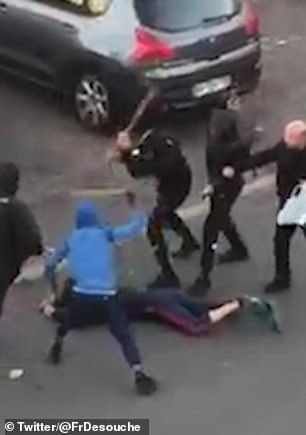 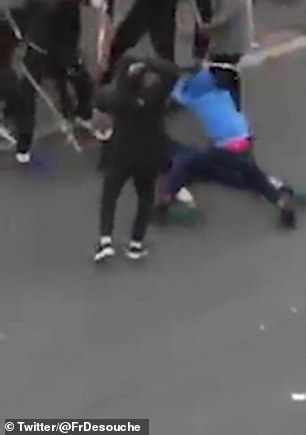 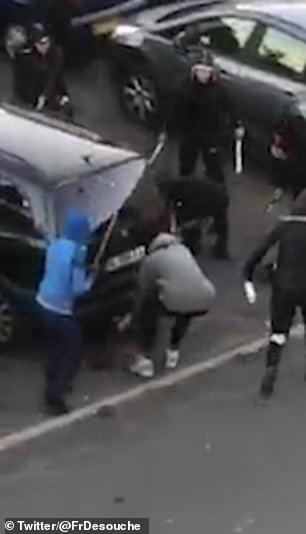 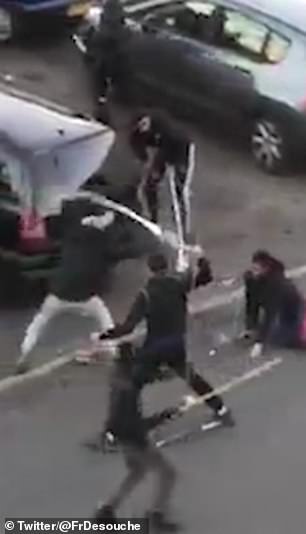 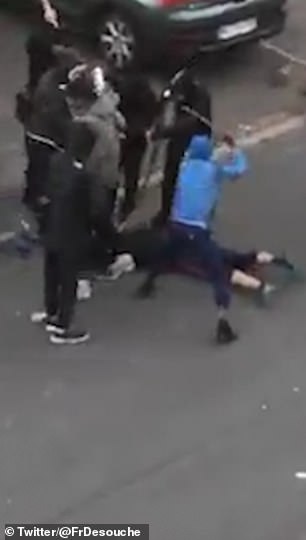 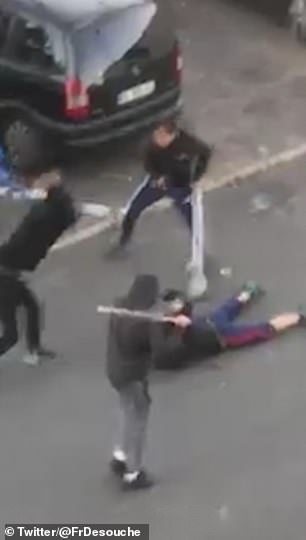 He was finally dragged away by terrified locals who witnessed the assault, and was rushed to an intensive care unit.

The – which involve mainly white youths in their early teens – come at a time of increasing gang violence in France, especially on the tinderbox housing complexes surrounding major cities.

The latest outrage unfolded in Garges-les-Gonesse, in the Val-d’Oise department, some 20 miles from the centre of Paris, on Wednesday afternoon.

‘It was a terrifying attack,’ said an investigating source. ‘The thugs can be seen using their weapons to beat the life out of the boy.

‘He tried to hide underneath a car, but was dragged from underneath it, and then everybody got involved.

‘Many had hoods up, and were wearing caps, but their faces were still easily identifiable.

‘The blows went on and on, even when it was obvious he couldn’t take anymore. Adults living can be heard shouting, and calling for the boy to be released.

‘What happened is being linked to a feud between rival gangs, and a settling of scores. It could easily have ended in murder, but the boy was quickly rushed to hospital.

‘He was suffering from severe head injuries, and underwent emergency treatment. His life is no longer in danger.’

Around 10 suspects were involved in the attack, with those now in custody including the two schoolboys aged 14 and 16, and a 20-year-old man.

A judicial enquiry was opened on Friday afternoon, as magistrates said they were investigating ‘attempted murder’, ‘aggravated violence’, and an ‘armed gang attack’.

The two minors were held in pre-trial detention facility, while the third defendant was placed on remand in an adult prison.

Nobody linked to the case – either attackers or victim – have yet been identified by the French authorities, who are appealing for witnesses to come forward.

They believe that the lynching was related to an earlier attack in Garges-les-Gonesse, when youths aged 16 and 19 were wounded by lead shot fired by a ‘rival gang member,’ said the source.

On Saturday families living on estates in the Val d’Oise, including many from Garges-les-Gonesse, will join marches calling for ‘peace and understanding’ between young people.

1 railroad worker dies, 2nd seriously hurt in Chicago blast
'What year is it?' Mueller report will be delivered on a CD-ROM
Rapper Bun B opens fire on an armed masked intruder
Australian reporter Steve Dunleavy dies aged 81
Boris Johnson is new Prime Minister after Tory Leadership win over Jeremy Hunt
Best bang for you buck: MIT delivers best return for your investment
New York man, 29, is third person arrested in Brooklyn Molotov cocktail attack on NYPD
Kanye will NOT put out any new music until his contact with Sony and Universal expires