Brooklyn Decker and Andy Roddick had both their SUVs broken into last night by bears, who managed to open doors and get inside while looking for food.

The model-turned-actress shared a series of videos early Friday showing three open car doors on her two SUVs and large dirty paw prints inside the vehicle.

‘Bears broke into our f-ing cars last night! Bears! Or a bear,’ she explained as panned around her driveway.

She didn’t share where the break in occurred, though the pair – who share two young children – have homes in North Carolina and . 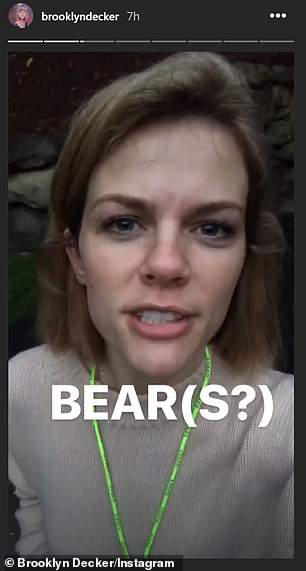 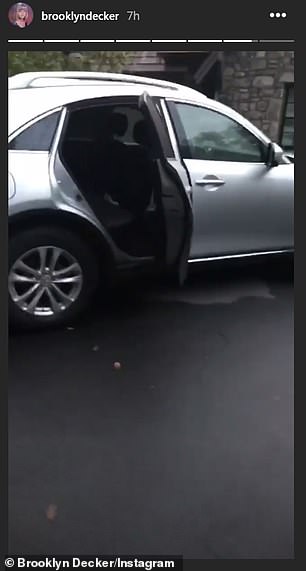 Brooklyn Decker shared her cars were broken into overnight by bears. A silver SUV had one door open 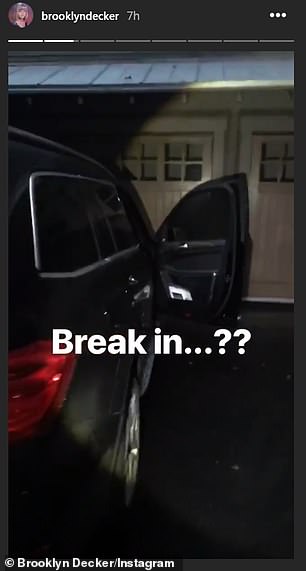 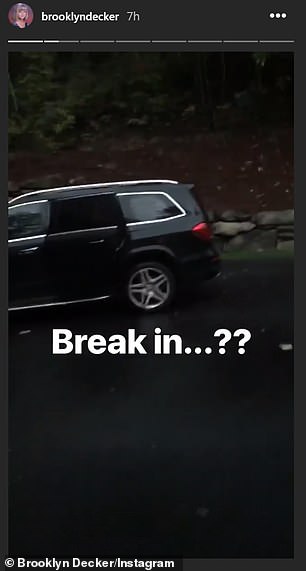 According to Decker, her nanny asked at 7am if they had left their car doors open last night.

She showed her instagram followers what she then discovered – two doors to her black Mercedes SUV were open and a door to a silver SUV was also ajar.

‘They can actually open door handles,’ Decker went on as she zoomed in. ‘Can you guys see all the dirt marks?

Inside the black SUV, by a car seat, was a massive dirty paw print. 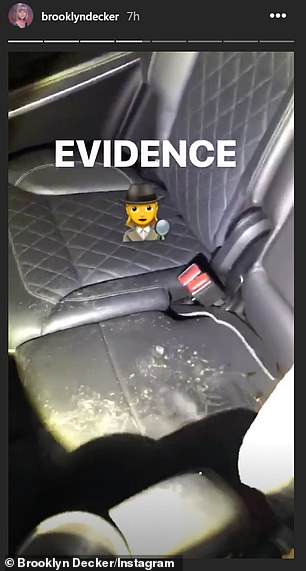 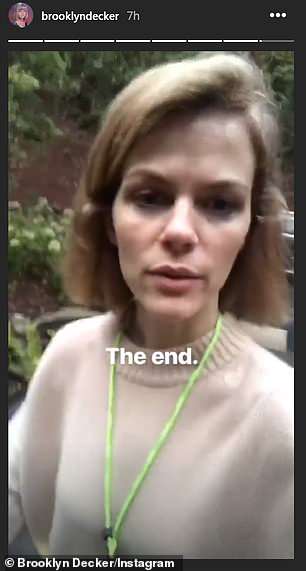 There was a massive black paw print in the back of the black SUV. Decker wore a whistle to inspect the vehicles, in case bears were still there

But outside the car on the ground was the real prize, which had eluded the unwelcome visitors – food still safely ensconced inside a Yeti zip-top cooler.

‘If this isn’t an ad for Yeti, I don’t know what is. They tried to get into the Yeti, they scratched the Yeti… Little puncture marks on the top,’ she narrated as she showed it off, and the hole in the cloth exterior.

And she even clarified,  ‘I promise this isn’t an ad for Yeti.’

Inside she showed off an unharmed container of yogurt. ‘They smelled the yogurt!’

Decker then walked back into her home, sharing her plan for what would have happened if the animals were still around.

‘I’m wearing a whistle because if they were still in the car I would have scared them off with my whistle.’

Decker married the former tennis star in 2009. They have a son, Hank, who turns three this weekend and a baby girl born earlier this year.

'I thought he might inadvertently kill me,' Brett Kavanaugh accuser goes public with her story
Author is slammed over bizarre tweet about women seducing men with their 'lubed legs'
Anonymous artists erect a wall covered in fake IUDs shaped like Donald Trump
Trump rips 'totalitarian' Democrats who are 'staging show trials' at Louisiana rally
The world's richest people use third-party companies to help scrub embarrassing stories
Kandi Burruss speaks out about Valentine's Day triple shooting at her restaurant in the Atlanta area
Hurricanes are getting faster and more dangerous due to climate change, study claims
Mountain lion captured in San Francisco is suspected of killing a kangaroo and two wallaroos in zoo