The Brexiteers behind the Leave.EU campaign have mounted a campaign to deselect “remoaner” Tory MPs.

Mr Banks and his spin doctor Andy Wigmore launched the campaign by tweeting a series of attack ads aimed at Tory MPs who have “hinted support” for a second referendum.

Mr Banks, who was blocked from joining the Tories in North West Leicestershire by chairman Brandon Lewis, said his campaign had received £250,000 from almost 9,500 individual members.

He said: “We will spend this money launching an all-out assault on those who are anti-Brexit, starting with anti-democratic Tory MPs who have been trying to undermine the referendum result.

“We’ve begun by targeting Damian Collins, MP for Folkestone and Hythe and chairman of the House of Commons select committee on Digital, Culture, Media and Sport. Next week we will write to every voter in his constituency urging them to join the Conservative Party so that they can deselect him.” 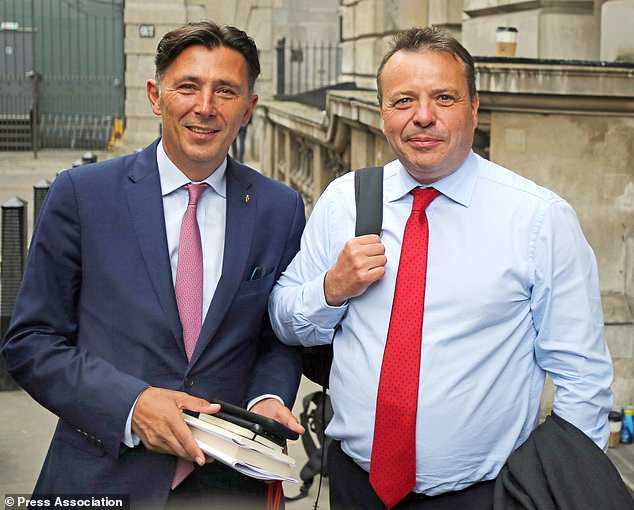 He added: “Next, we intend to write to every voter in Amber Rudd’s Hastings and Rye seat calling for them to join the Tories in order to deselect her.

“Having previously claimed she would respect the referendum result, Ms Rudd told ITV’s ‘Peston’ programme on September 26 that she would “absolutely” back a second referendum.

“We think this is disgraceful.”

Damian Collins told the Press Association he took Mr Banks’ attacks as a sign he was “doing something right”.

He said: “When Arron Banks stars attacking you, you know that you’re doing something right.

“The people of Folkestone and Hythe are smart enough to take no notice of his antics.”

Former defence minister Guto Bebb, who has also been targeted, said: “To be attacked by Arron Banks is something I take with pride.

“We want a people’s vote because the likes of Mr Banks stole the last one.”

Former Tory minister Nicky Morgan, who is also one of the targets, said on Twitter: “Adverts threatening the position of MPs elected and re-elected are anti-democratic and desperate – as Brandon Lewis and Conservatives have made clear there is no place for you in our party.”