Three Royal Navy Sea King helicopters have made their final flight before retirement, bringing to an end 49 years of service for the “indispensable” aircraft.

The helicopters, whose predecessors were introduced into service three weeks after the first moon landing, flew over Portsmouth Naval Base to their final destination of HMS Sultan in Gosport, Hampshire, where they will await disposal.

The flight from their base at RNAS Culdrose in Cornwall took them past the Navy’s hi-tech destroyer HMS Diamond and Portsmouth’s landmark Spinnaker Tower.

A total of 140 Sea Kings were built for the Royal Navy in their almost half-century of service.

They have been used for anti-submarine warfare, search-and-rescue missions, general duties, carrying Royal Marines commandos into action in the Falklands, Iraq, the Balkans, Sierra Leone and Afghanistan. 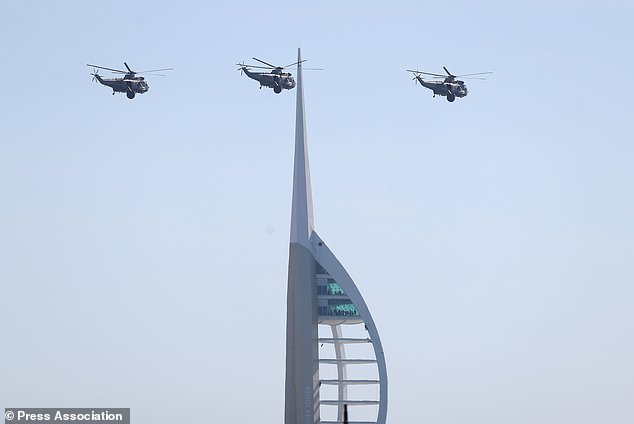 A Navy spokesman said: “It earned the ‘bagger’ tag after the Falklands conflict in 1982 when the airborne early warning variant was hurriedly introduced.

“The large black sack sticking out of the fuselage houses a powerful radar which scans the skies for potential threats.

“Those original baggers had one major flaw – they couldn’t track hostile aircraft over land, a problem rectified when the much-improved MK7 entered service in 2001.

“It proved to be a revelation. Crews found that they could not only detect aerial threats, but they could also track vehicle movements on the ground.

“The MK7 proved indispensable in helping Allied forces to evade and ultimately destroy Saddam Hussein’s army around Basra and the Al Faw peninsula in 2003.

“They also helped ground troops and police in Afghanistan arrest insurgents and seize masses of weapons and bomb-making equipment.”

The airborne surveillance and control role will be taken over by the new Merlin Crowsnest, which arrives at Culdrose next year and will operate from new carriers HMS Queen Elizabeth and Prince of Wales from 2020.

Jenny waving her big red knickers at that speeding train? Sorry, it was all a bloomin' fake!
The proof this 3D zebra crossing has made roads safer by slowing motorists down
Thousands of savers denied access to money as fund manager blocks withdrawal of cash
Woman and three children stabbed in north London attack
Incredible moment a massive manta ray named Freckles shows divers hooks embedded under her eye
British soldier, 78, in court over murder of IRA suspect in Northern Ireland 25 years ago
Dangerous thick smoke from bushfires continues to fill Sydney, Victoria 'code red' downgraded
Couple 'unaware' of Covid-19 pandemic as they were sailing across the ocean