The hearing at present only includes testimony from two people: ‘s Supreme Court pick Kavanaugh, and accuser Christine Blasey Ford, who claims Kavanaugh groped her and tried to rape her at a house party in the 1980s.

On Sunday, Ramirez came forward with her own allegations that Kavanaugh exposed himself to her at a Yale University dorm party in college. Kavanaugh strongly denies both claims.

‘Certainly we would be open to that and that process could take place on Thursday,’ Sanders said in an appearance on ABC’s ‘Good Morning America.’ 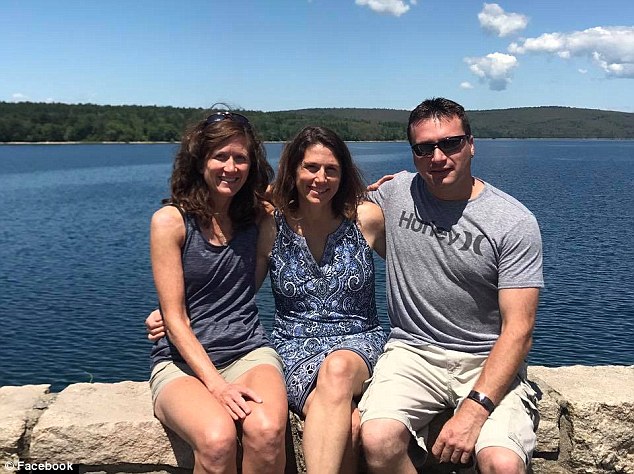 The White House is open to second Brett Kavanaugh accuser Deborah Ramirez (center, pictured with Denise Ramirez and a brother) appearing before the Senate Judiciary Committee on Thurdsay

‘Again, the president’s been clear, let them speak but let’s also let Brett Kavanaugh speak and let’s let him tell his side of the story before we allow allegations to determine his entire future,’ she said.

Senate Republicans are calling for a vote on Kavanaugh immediately after Thursday’s hearing.

Sen. Susan Collins of Maine, a critical vote that Republicans need to get Kavnaugh’s nomination through confirmation, has said she wants to hear from Ramirez under oath.

The Republican chairman of the panel, Sen. Charles Grassley of Iowa, has reached out to Ramirez. He also has exchanged letters with Ford. 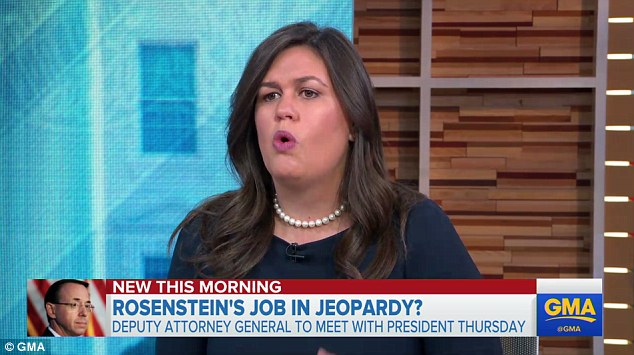 ‘Certainly we would be open to that and that process could take place on Thursday,’ Sanders said in an appearance on ABC’s ‘Good Morning America’

Ramirez lives in Boulder, CO, with her husband Vikram Shah, an Indian-born software engineer who studied at the University of Colorado, Boulder, and who works for wireless networking firm FreeWave. Among its customers are the U.S. Army.

Her sister Denise, an executive at Madison Square Garden in New York, also attended Yale and has shared messages on social media about date rape at the university. Ramirez attended Catholic school in Trumbull, Connecticut.

Democrats meanwhile are fuming that Grassley won’t schedule an appearance by Kavanaugh pal Mark Judge, who according to Ford was present in the bedroom where the alleged high school attack occurred.

Ford was spotted recently in a Delaware beach town near where Kavanaugh and friends partied in high school. He wrote a semi-autographical book about his boozy high school years. 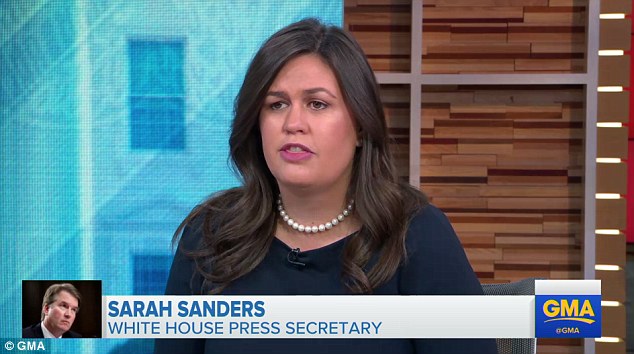 Asked by host George Stephanopolous why not let the FBI get involved interviewing witnesses to the alleged crimes, Sanders said: ‘Because we have a process in place. 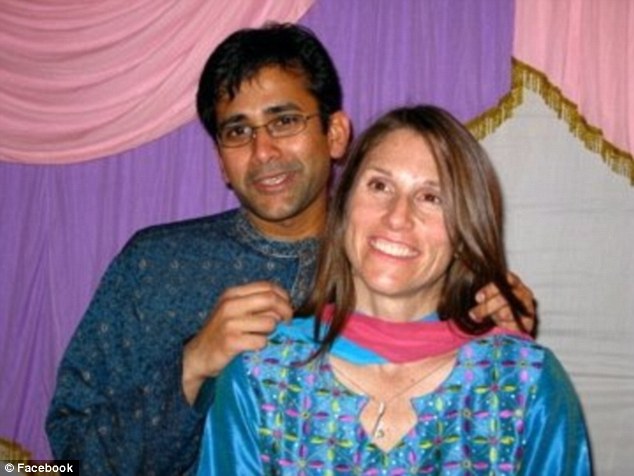 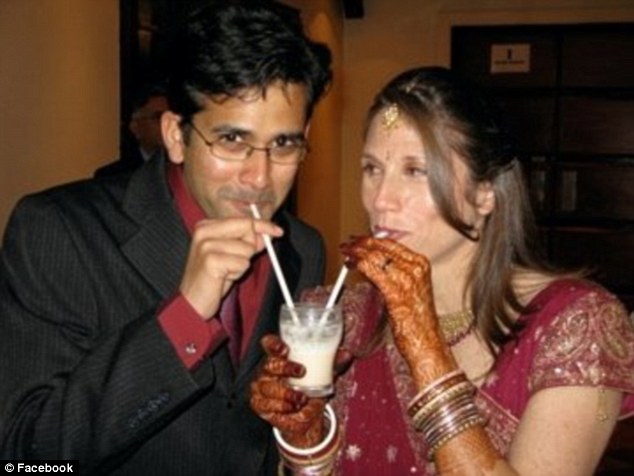 Ramirez lives in Boulder, CO, wit her husband Vikram Shah, an Indian-born software engineer who studied at the University of Colorado, Boulder

Sanders, like congressional Republicans, dug in against allowing the FBI to investigate the charges before the confirmation goes forward.

Asked by host George Stephanopolous why not let the FBI get involved, she said: ‘Because we have a process in place. They have a Senate process and we think it should be done through that.’

She continued: ‘No one is trying to hide from this. In fact, Brett Kavanaugh’s been leaning in. He’s been begging to come and tell his story and be able to do that, whether it’s publicly or privately, he’s asked for that opportunity and he’s been perfectly open for others to have the opportunity to share their side as well.’

‘But let’s be clear. From the very beginning, he has been strong and unequivocal in his denial that anything like this happened,’ Sanders continued. ‘He also has a lifetime of a record of empowering and respecting women and you have seen hundreds of women that know him and know him well come out and say exactly that. 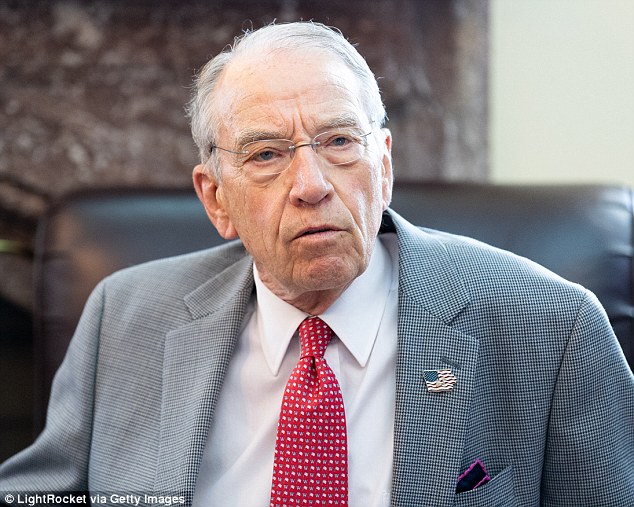 Senator Chuck Grassley (R-IA) has set up a hearing that only includes Kavanaugh and Ford, although he has reached out to Ramirez

‘You know, it’s interesting that you say that. It’s a lot of Democrats that like to ignore Keith Ellison and Cory Booker they love to fight and champion women until they disagree with them,’ she said.

Stephanopoulos pointed out that former Democratic Sen. Al Franken lost his job after accusations of inappropriate conduct came out.

‘And a number of other Democrats should have the same type of scrutiny,’ said Sanders.

Ellison is a Democratic House member running to be state attorney general in Minnesota. Two women have accused him of abusive behavior during relationships. He has denied the charges.

Booker, a New Jersey senator, wrote a column while a Stanford University student about groping a woman’s breast when he was 15 on New Year’s Eve in 1984 after the two had kissed. He called the incident in a ‘wake-up call’ in a column he wrote about date-rape and consent.

Collins said she was ‘appalled’ by Trump’s tweet that asked why if Ford’s accusations were true she didn’t bring them up long ago.

‘Look, the president once again has said on a number of occasions that he thinks everybody’s voices should be heard and let’s let this process play out. It’s the Democrats who have been halting it from the beginning and not allowing this to go through the process because they want this to be a political game and I think that the way that they have operated in this is absolutely appalling,’ Sanders said.

‘What I know is the truth, and the truth is I’ve never sexually assaulted anyone,’ Kavanaugh told Fox News’ Martha MacCallum in an interview Tuesday where he was seated alongside his wife, Ashley.

Kavanaugh also denied the accusation by Deborah Ramirez that he exposed himself to her at a Yale dorm party in college decades ago.

‘The other people alleged to be there, don’t recall any such thing. If such as thing had a happened, it would’ve been the talk of campus,’ he said.

‘Again, again – just asking for a fair process where I can be heard and I can defend my integrity,’ Kavanaugh pleaded.