Tens of thousands of people are set to take a stand against the surge in fuel prices when they take part in a national fuel strike next month.

The National Fuel Strike on October 26 was organised by retired music teacher Sabrina Lamont, who decided to boycott buying fuel as a national day of action.

Ms Lamont gave up a job she loved when she could no longer afford to keep buying costly fuel to travel 500km a week to teach isolated children. 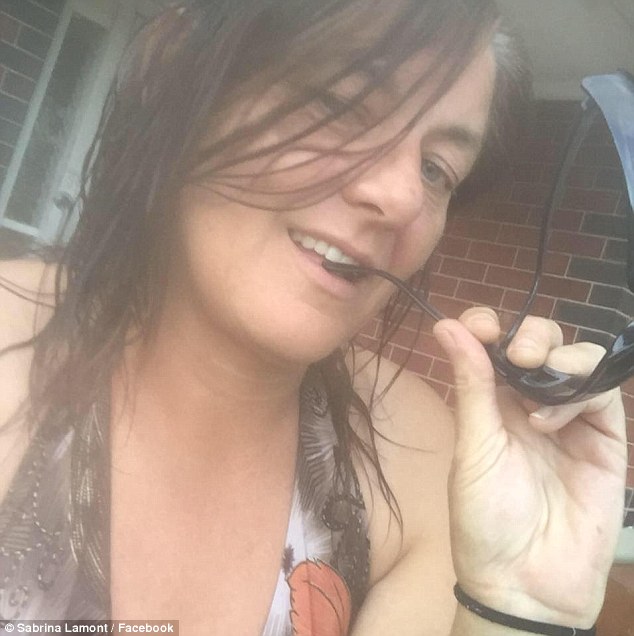 The National Fuel Strike on October 26 was organised by retired music teacher Sabrina Lamont (pictured), who decided to boycott buying fuel as a national day of action 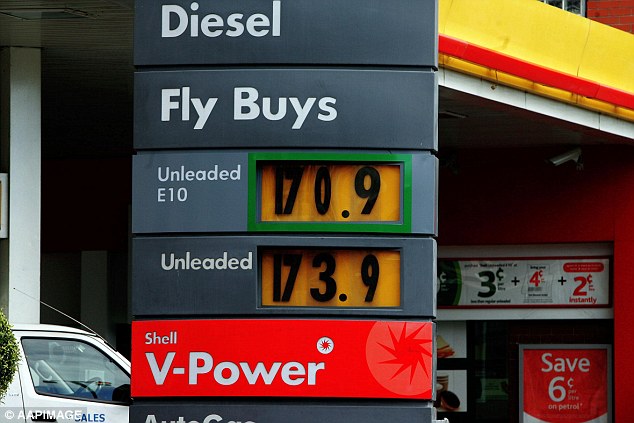 Last Wednesday, she decided she wasn’t going to put up with costly pump prices any more when she created the Facebook page ‘National fuel strike’.

Already more than 46,000 people have committed to the national day of action – with another 54,000 interested – and the number keeps on increasing every day.

Ms Lamont said she created the day to reduce the burden of excise and taxes, which according to the publication, adds up to more than 30 per cent of the bowser price.

On the Facebook page, Ms Lamont wrote: ‘It’s time to rise up against the petroleum industry and make a stand.

‘On the 26th of October let’s join together in an Australian wide fuel strike.’

The post already garnered plenty of interest with many people taking to social media to share their comments.

‘Lets get on board about time,’ one woman wrote.

‘The people, united, will never be defeated,’ another person said. 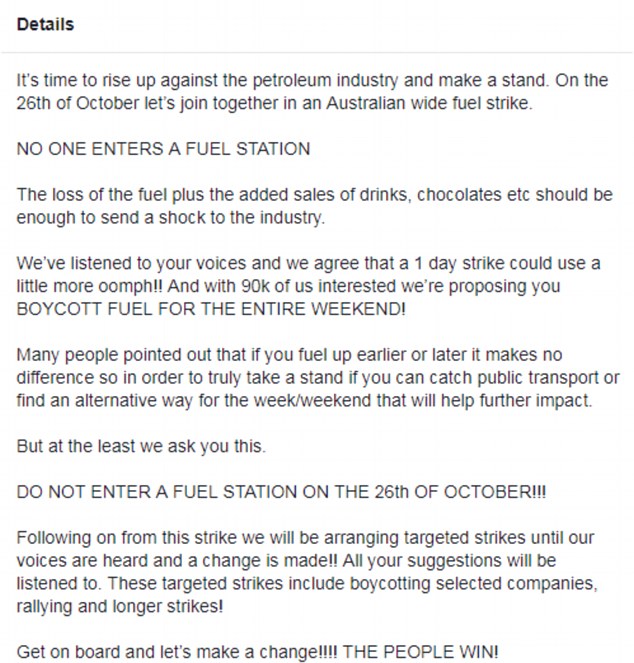 A third person added: ‘Complete gouging especially shell and Caltex will never buy from them again.’

Ms Lamont believes the effect of boycotting servos – even for just one day – will be enough to shock the industry into keeping prices to a minimum.

‘The loss of the fuel plus the added sales of drinks, chocolates etc should be enough to send a shock to the industry,’ she wrote.

‘Following on from this strike we will be arranging targeted strikes until our voices are heard and a change is made!!’ 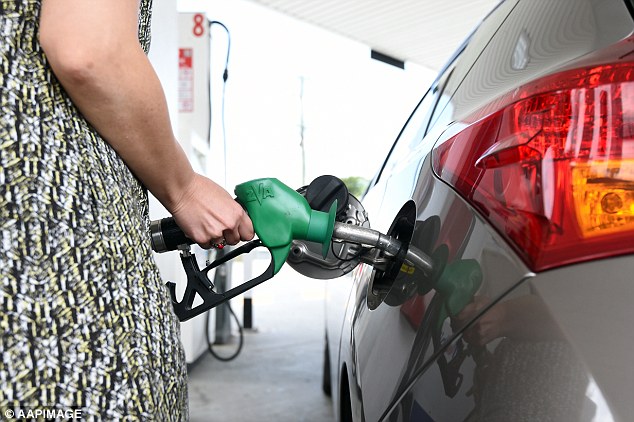 Australian motorists are being slugged almost $1.70 a litre for unleaded fuel thanks to a weak Australian and high global oil and wholesale prices (stock image)

While not purchasing fuel one day a month will undeniably have an impact, RACQ spokeswoman Lucinda Ross believes it won’t be effective in the long-term.

‘We see many motorists continuing to buy from the most convenient site, often just because it’s on the way home from work – but these servos could be the ones charging the highest prices,’ Ms Ross said.

According to Ms Ross, the most effective way to keep petrol prices at their lowest is to do your research and always purchase fuel at the cheapest servo.

Regardless, Ms Lamont is hopeful the government will listen to her call to action and bring down taxes for ‘basic living necessities – like fuel’.

The news of the boycott comes after it was revealed petrol prices have surged just days out from the school holidays with motorists being slugged almost $1.70 a litre. 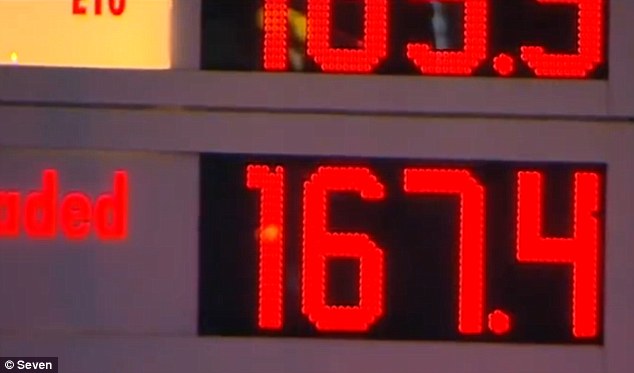 The price of unleaded fuel in Sydney on Monday, which reached as high as 167.4c a litre, as reported by Seven News

Drivers are also bracing for more pain at the pump, with warnings the cost of fuel is set to rise even further.

The price of unleaded fuel reached as high as 167.9c a litre in on Monday, the most expensive it has been in the city since-mid 2008, according to fuel data source MotorMouth.

Back then, drivers were forking out about $1.70 a litre to fill up their vehicles,  reported.

– The average price for unleaded fuel across Australia’s major cities, taken at 8am on Tuesday

Of the Melbourne metropolitan petrol stations monitored by the RACV, about half had increased prices to the new high by Monday afternoon.

Motorists are currently feeling the effects of a weak Australian dollar and high global oil and wholesale prices.

RACV vehicle engineering manager Michael Case told The Herald Sun that ‘fuel prices have been influenced by an underlying increase in oil prices’.

‘The increased oil price has a flow-on effect which extends to the wholesale price of refined petrol, and subsequently the prices we see at the pump,’ he said.

Some petrol stations across the city had prices as high as 167.4c a litre.

Prices in Brisbane are slightly less expensive, although they have been nudging $1.60 a litre.

Across the nation’s other major cities, pertol prices are either at or close to $1.60 a litre. 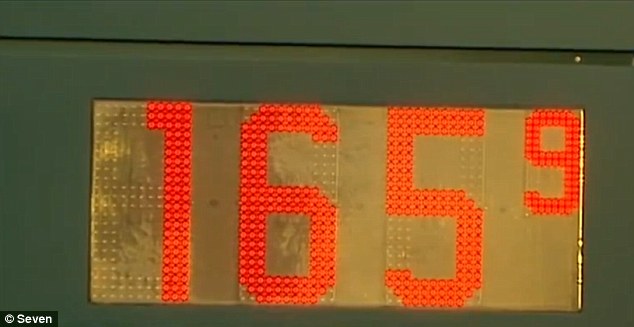 Drivers across Sydney have been faced with unleaded petrol prices of more than $1.60 a litre in recent days, with the cost expected to remain high throughout the school holidays. Pictured, the price of fuel at one service station in the city, as reported by Seven News on Monday

Mercedes scare as Valtteri Bottas breaks down in Mexican Grand Prix final practice
Grindr user, 21, is arrested after three men were attacked
Praying for redemption? Lori Loughlin leaves church without husband Mossimo Giannulli
Princess Eugenie reveals she has an eye for edgy fashion in £850 studded ankle boots
Phil Thompson saved my life: Tony Cottee on his brain haemorrhage
Boris Johnson admits that his 'do or die' Brexit vow is broken
Wuhan doctor dies nine days after contracting deadly coronavirus as he battled to save patients
WENDY HOLDEN: Has the Queen forgiven her governess who wrote the original Royal tell-all book?