She stars in the very raunchy BBC drama Wanderlust.

And after raising plenty of eyebrows in the UK, the series is set to debut on Netflix in the US on October 19.

On Sunday, Toni Collette participated in a special screening and Q&A at the Los Angeles Film Festival. 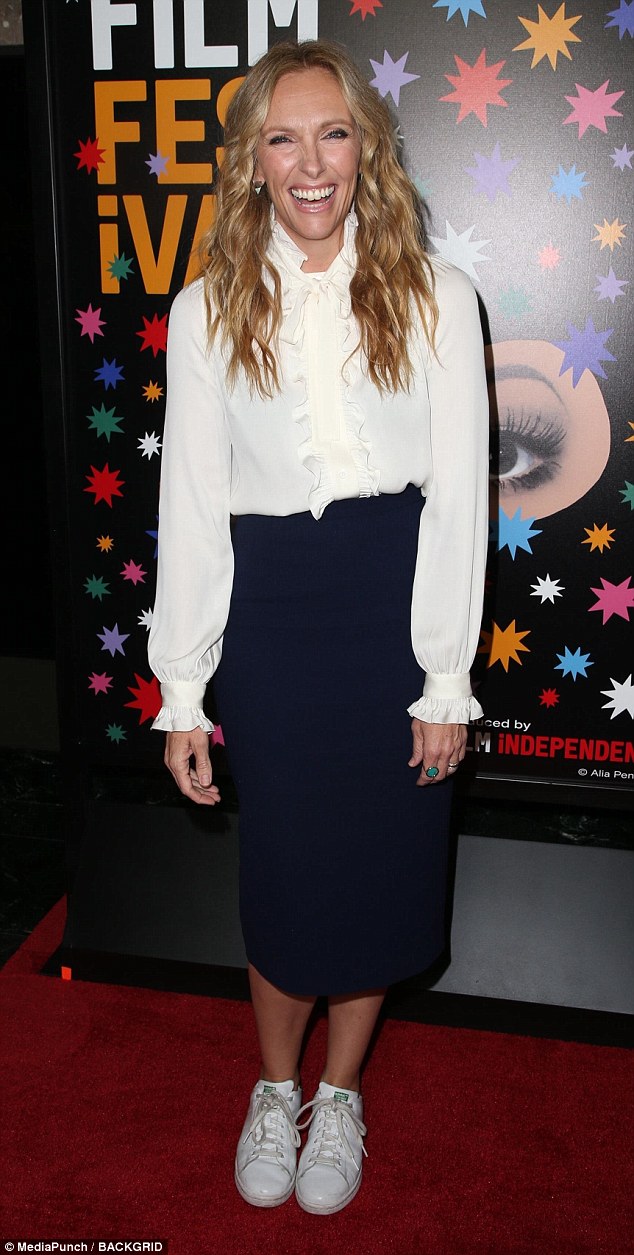 In the spotlight: Toni Collette walked the red carpet in a pair of white sneakers at the Los Angeles Film Festival on Sunday where she promoted her BBC/Netflix series Wanderlust

The Australian actress, 45, walked the red carpet in a pair of white sneakers that she wore with a frilly white blouse and a black skirt.

She was made up with black eye-liner and mascara along with blusher on her cheeks and glossy red lip color. 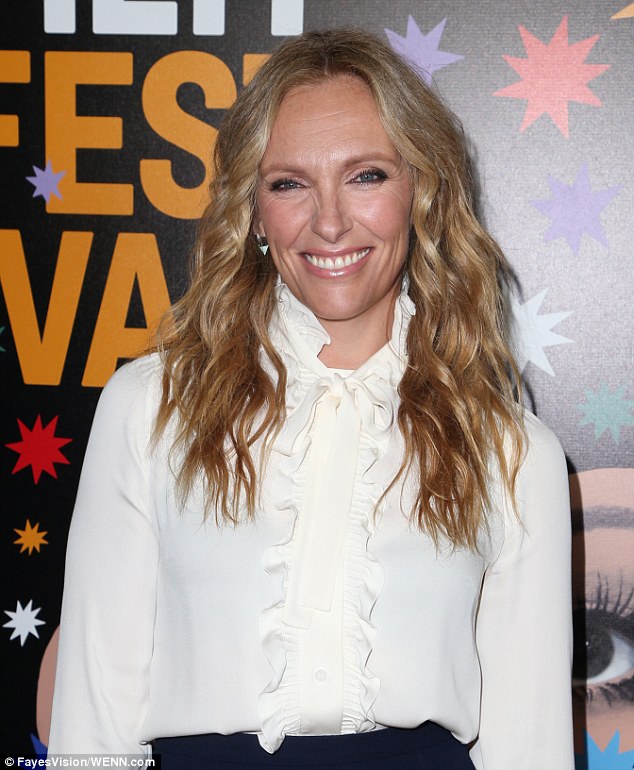 Upbeat: The Australian actress, 45, wore a frilly white blouse and left her long blonde highlighted hair loose with a center parting and styled in relaxed curls 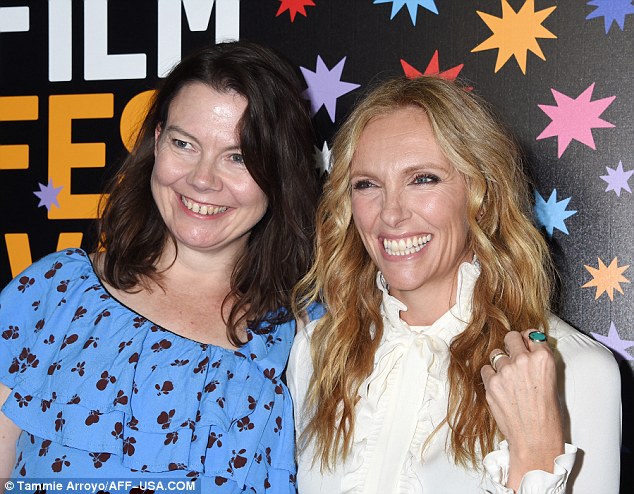 Collaborators: The actress posed on the red carpet with one of the series producers, Kate Crowther 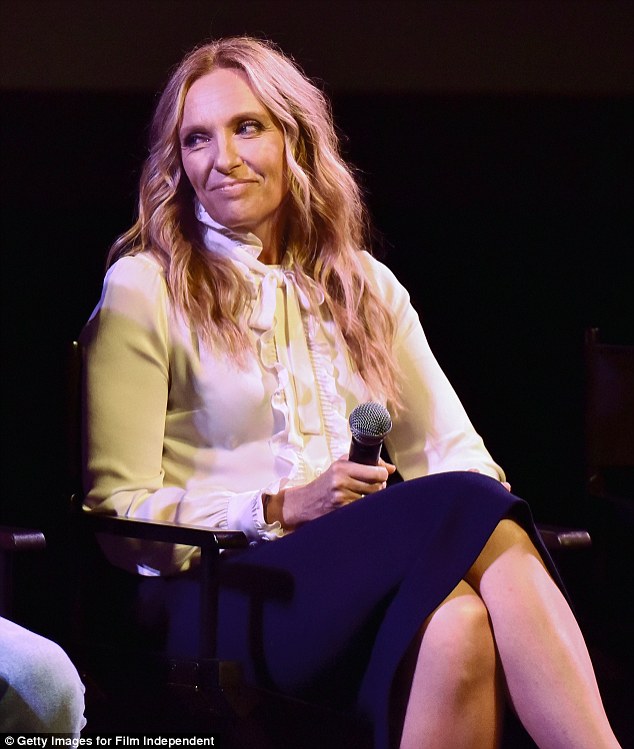 Gave insights: Collette took part in a Q&A at the special screening. Wanderlust raised plenty of eyebrows in the UK for its sex scenes and is set to debut on Netflix in the US on October 19 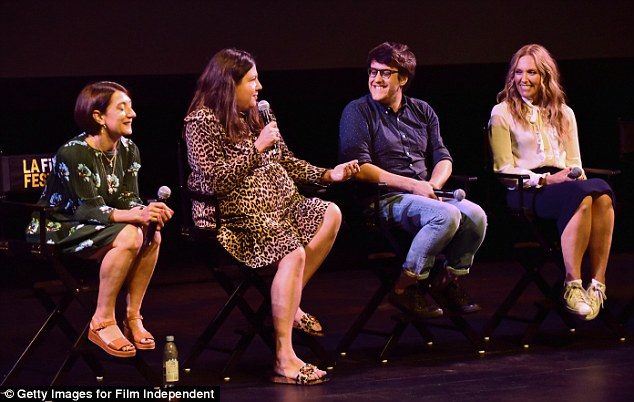 Team effort: Collette was also joined on stage by the series producers Roanna Benn and Jude Liknaitzky and the show’s writer Nick Payne

In Wanderlust, the Muriel’s Wedding and Sixth Sense star plays a therapist desperately trying to save her marriage.

Recently, she told the UK’s it was an honor to portray a middle-aged woman in a way that has not been substantially seen on TV.

She told the publication: ‘Someone told me I was the first woman to have an orgasm on the BBC… and I’m happy to take the accolade.’

Collette also added she hopes Wanderlust broadens the spectrum on how middle-aged women can be cast and viewed in the media.

The Little Miss Sunshine star said it was the honest depiction of female pleasure on-screen that what drew her to the project.

She said: ‘It’s so honest and fresh in the way the women are portrayed. To be a middle-aged woman, to be in a long-term relationship and to be alive, dealing with a lot of things, it’s tough.’

‘Certainly a middle-aged woman’s sense of self-esteem, of sexuality, is not often talked about.’ 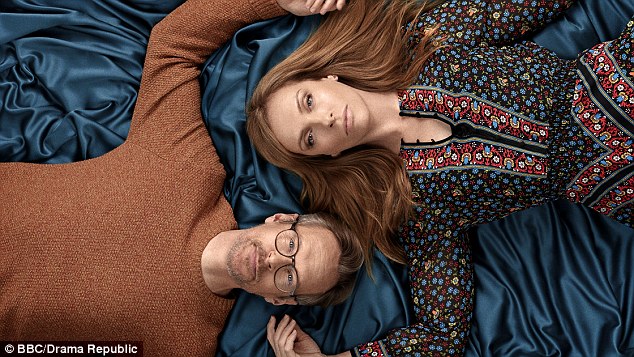 Explicit: Collette plays a therapist trying to save her marriage in the series and revealed recently: ‘I was the first woman to have an orgasm on the BBC’ (pictured with co-star Steven Mackintosh

The Bachelor beauty secrets revealed: From weekly tanning sessions to over 1,000 dresses
Take Me Out contestant's get matching tattoos during their first date
White woman calls 911 after spotting a black man babysitting white children
Chelsea vs Crystal Palace LIVE - Premier League 2018/19 score, team news and updates
Dog owners are warned NOT to feed mince pies to their four-legged friends
American and United Airlines MUST replace 31 planes' cockpit displays before November deadline
Wales confirms 13 more cases of the killer coronavirus as UK's toll jumps past 600
Ghislaine Maxwell pleads not guilty as she fights for $5M bail