Nikki Bella hasn’t spoken to John Cena for some time.

The Total Bellas star split from the 41-year-old wrestler earlier this year, just weeks before they were due to get married, and though she’s subsequently insisted they are still good friends, she’s now admitted they haven’t been in contact recently.

Asked if she’s spoken to John recently, she said: ‘He’s doing him and I’m doing me.’ 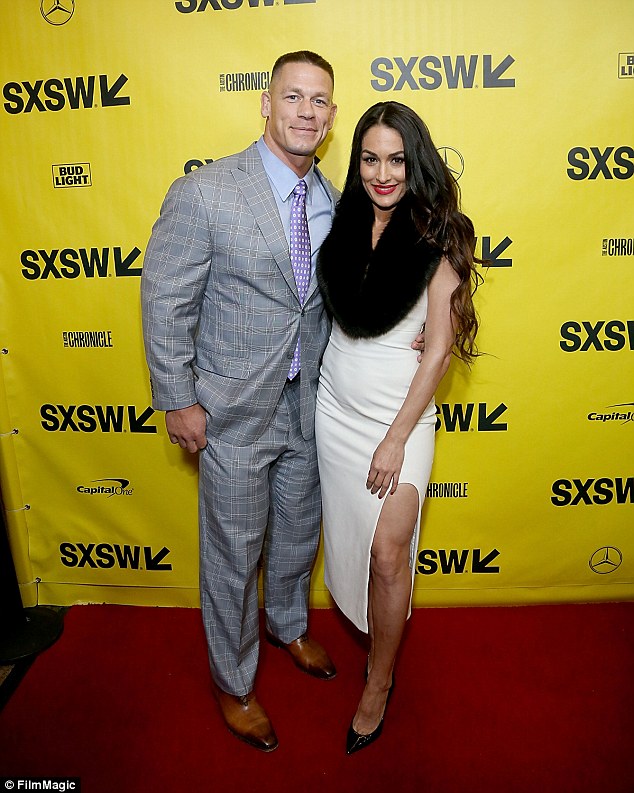 Don’t call me and I won’t call you: Nikki Bella hasn’t spoken to John Cena for some time, she told E! News; seen in March

She added, ‘I slowly feel like I’m doing that. I think it’s happiness, and just fully being happy and that’s what I want.’

The 34-year-old wrestler – who briefly reunited with John after calling off the wedding – is finding it ‘scary’ trying to find herself, but she’s enjoying pushing herself to do new things.

She added to : ‘I just feel like I’m at that age where I’m discovering who I really am and what I want out of life and just, like, independence.

‘Is it scary and you do have these moments of like, “What am I doing?” – and fear. I just kind of am liking the challenge.’

Nikki is too busy focusing on herself to think about dating again at the moment. 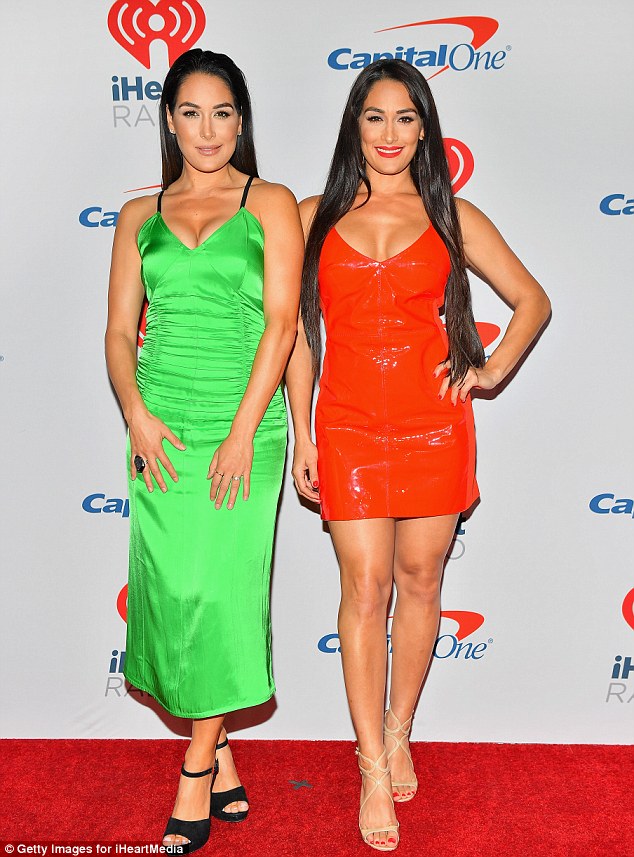 Eye-catching: Nikki and Brie Bella donned their brightest and boldest frocks for the iHeartRadio Music Festival on Saturday night

She said: ‘I made a joke about dating, Netflix and black licorice and how it gets boring and it turned into this whole thing where I got quoted saying dating life is boring.

‘I was like, ‘No I said Netflix and black licorice and [was boring]’… it’s not what people expect, but I’ve got to admit I am single but I’m not ready for mingling yet.’

Though she hasn’t been in touch with John recently, Nikki claimed last week they still share a special ‘connection’ and are close friends.

She said: ‘We are [the best of friends] I think it’s when you have an amazing connection with someone and you just stay friends.’

Nikki was seen with her sister Brie Bella at the iHeartRadio Music Festival on Saturday night. 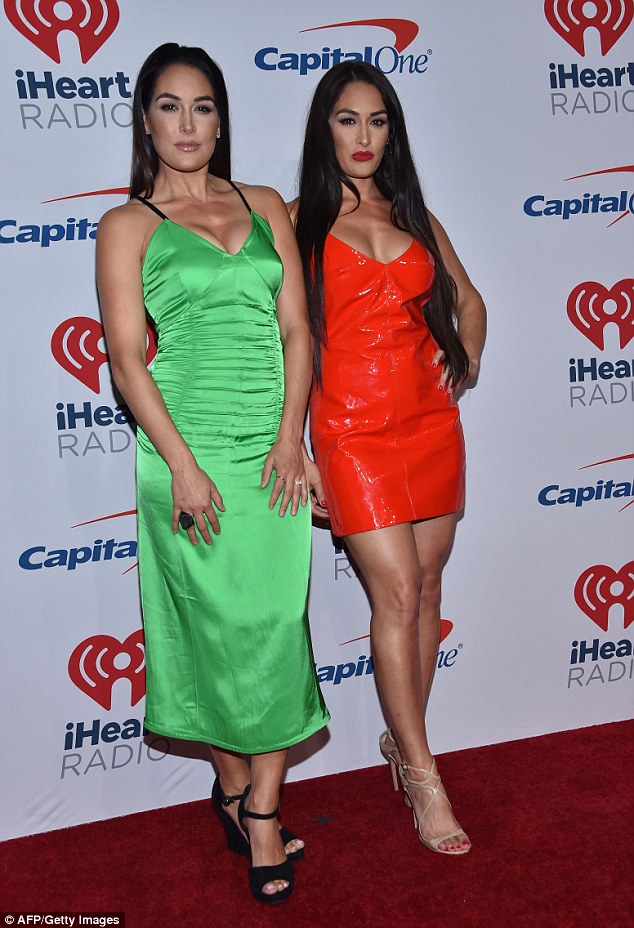 Posing on the red carpet the duo were hard to miss in citrus colored dresses which flattered their olive skin tone.

Nikki, 34, opted for an orange PVC mini dress which she teamed with nude stilettos.

She flashed a generous amount of cleavage and wore her long glossy locks loose. A pop of scarlet lipstick finished her look.

Brie meanwhile opted for a satin green midi dress with black heels. She kept her makeup look more natural than Nikki and swept her tresses back off her face.

Day one of the festival on Friday saw Mariah Carey, Fleetwood Mac, Childish Gambino, Jack White, Jason Aldean, Sam Smith, Panic! at the Disco and Kygo take to the stage. 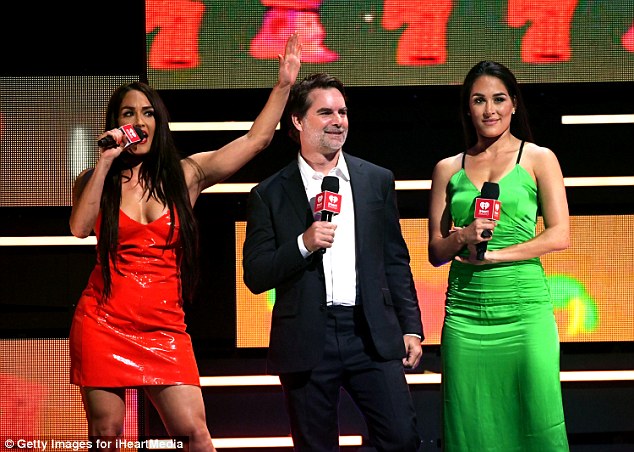 Taking the mic: The twins took to the stage during the night at the T-Mobile Arena 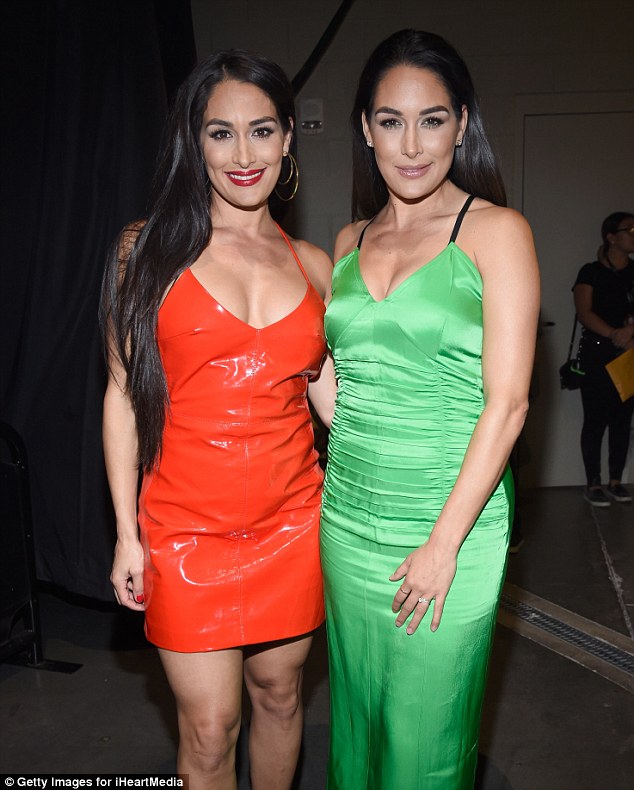 Sister sister: The WWE ladies showed off some cleavage in their low-cut frocks

Liverpool goal Nabil Fekir will keep, says Lyon president Jean-Michel Aulas
No. 3 Georgia turns road test into rout of No. 24...
Plasterer, 38, jailed for punching cabin crew after downing four pints before 9am flight
Kate Middleton has returned to her trademark long bouncy locks
Freddie Starr’s fourth wife claims she tried to ‘kill herself to escape his torture'
Newly released footage shows a terminally ill five-year-old appearing to respond to her mother
Putin takes swipe at Macron as he says 'yellow vest' protests would NEVER be allowed in Russia
More than 120,000 Equitable Life savers will see their pension pots rise by £9,000 on January 1