The 15-year-old girl with a severe allergy who died after eating a Pret sandwich told her father: ‘Daddy help me I can‘t breathe’ before collapsing on a BA flight, an inquest heard today.

Natasha Ednan-Laperouse, 15, fell ill within three minutes of consuming the baguette she bought at a Heathrow branch, which she believed was safe to eat because the ingredient was not listed on the packaging.

He said that she ate the artichoke, olive and tapenade baguette in Pret and then quickly started complaining of an itchy throat. After boarding the flight to Nice hives broke out on her neck and midriff and her condition deteriorated.

Her father, the millionaire founder of the Wow Toys company, then gave her two doses of allergy drugs with EpiPens but it didn’t work and she then told him: ‘Daddy help me – I can’t breathe’.

Natasha suffered a cardiac arrest and died in a French hospital where her father called her mother and brother in the UK and put the phone to her ear so they could ‘say goodbye’ just before she passed away.

In heartbreaking evidence he says shortly after she died he cut off a lock of her hair and told her: ‘We would love her forever’. 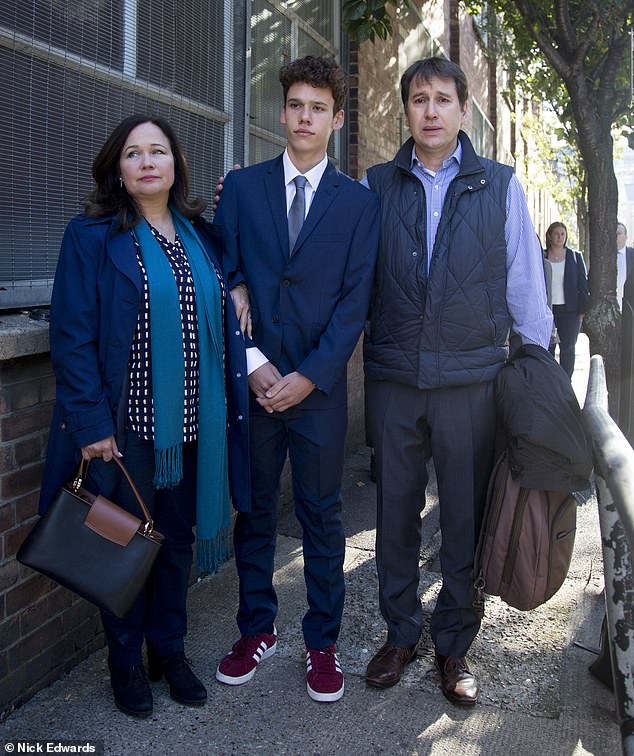 Natasha’s father Nadim Ednan-Laperouse, mother Tanya and brother Alex arrive at the inquest into her death 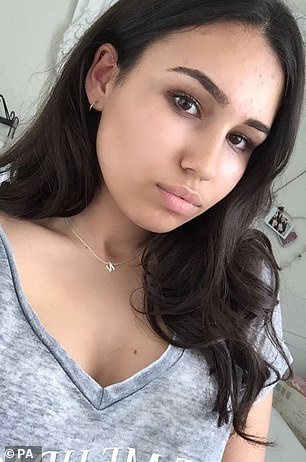 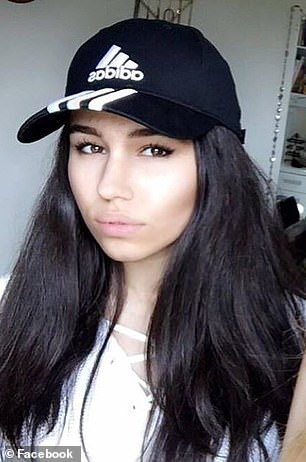 NatashA, 15 (pictured), died of a severe allergic reaction after she bought the artichoke, olive and tapenade baguette from a shop at Heathrow Terminal 5

She was travelling with her father and a school friend from  to Nice, later collapsed during a flight.

Natasha started to feel unwell shortly after take-off and red welts appeared on her skin.

Her father Nadim, the millionaire founder of the Wow Toys company, gave her two doses of allergy drugs with EpiPens in an attempt to revive her.

Natasha was placed on the floor of the plane and a junior doctor on the flight injected her with adrenaline. 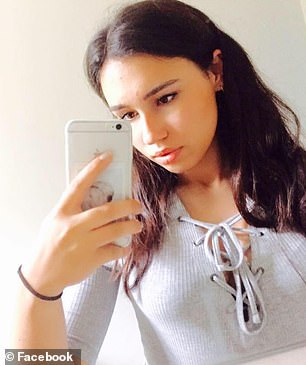 The schoolgirl, who had hoped to become a lawyer, then suffered a cardiac arrest and fell unconscious.

It was met by French paramedics, who took Natasha to hospital where she was pronounced dead later that day on July 17, 2016.

Mr Ednan-Laperouse, 53, from Fulham, south-west London, said: ‘As a family now of three, my wife, my son and I are still trying to adjust to life without our beloved girl. It’s a daily battle and the pain is indescribable.

‘Everything we say and do is a reminder that she isn’t with us – her empty bedroom, school uniform hanging in her wardrobe … her holiday bag packed for her holiday in Nice has never been unpacked. We can’t bear to.’

Natasha was always careful to check the food she bought was safe to eat. But she was unaware that sesame seeds had been baked into the bread of the artichoke, olive and tapenade baguette. 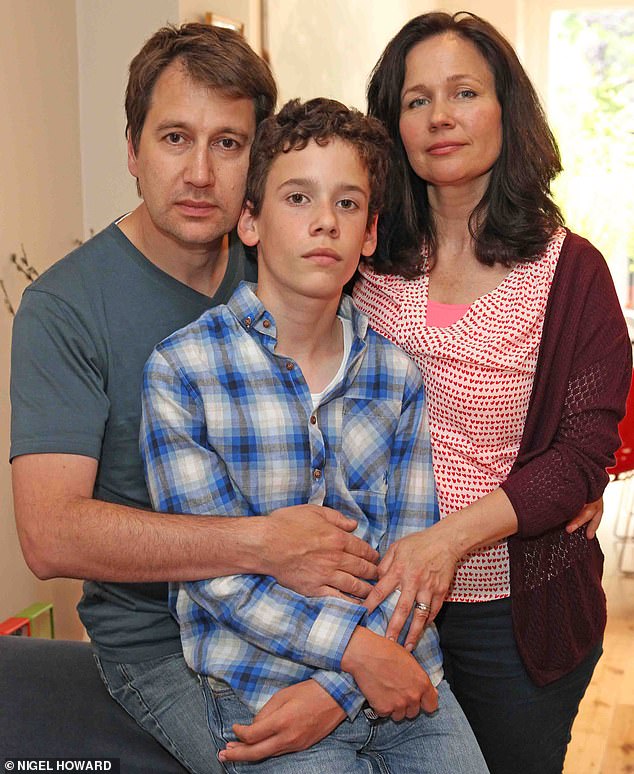 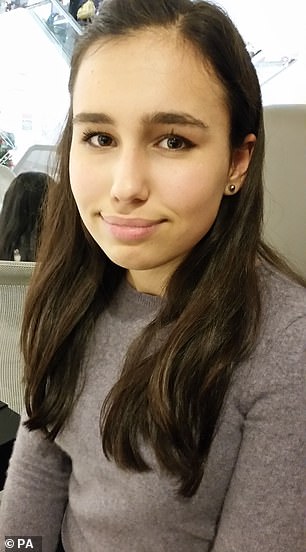 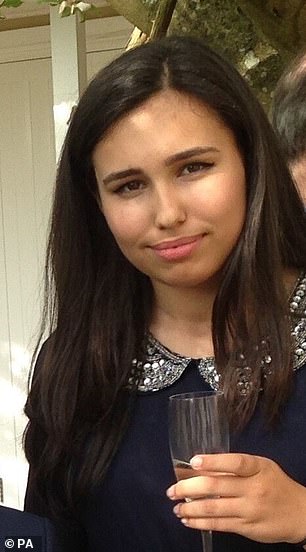 The inquest at West London Coroner’s Court is expected to examine why Pret, one of the country’s biggest food chains, did not have to list sesame seeds as an ingredient in the £3.45 sandwich. Pret products do not have to be individually labelled with allergen or ingredient information. The loophole is supposed to free small, independent sandwich shops and cafe chains from onerous regulations. 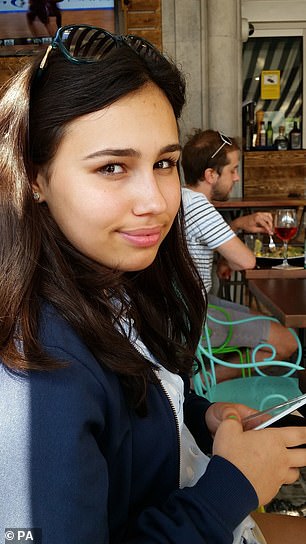 On this occasion, the sesame seeds had been baked into the bread of the baguette and Natasha didn’t spot them when checking her food

Instead, signs on shelves and by tills in Pret stores tell customers with allergies to speak to a manager who is trained to give allergen advice. Before hearing of the case, Pret had started to improve the allergen information it offers customers, but the inquest will explore whether more should be done.

Pret’s website now carries a list of allergens in its food and drinks, including highlighting sesame in the artichoke, olive and tapenade baguette.

The hearing will also assess the lifesaving measures taken by BA staff on the flight, the training they were given and the equipment they had to deal with allergic reactions.

It is expected to examine whether the aircraft should have altered course to a closer airport, such as Lyon, and what advice the pilot sought from medical experts on the ground.

The role of French paramedics when the aircraft landed is also expected to come under close scrutiny, amid questions about whether their equipment, in particular a defibrillator, was functioning.

Natasha, a keen horse-rider and a talented ice-skater, was a popular pupil at Lady Margaret School, a Church of England academy in Fulham.

She was due to spend four days in Nice before going to a Christian festival in Norfolk and a holiday in Greece during the summer break.

Mr Ednan-Laperouse and his wife Tanya, 51, paid tribute to their daughter, saying: ‘She had a strong moral compass and often showed maturity beyond her years.

‘She had a great sense of humour and was known for her contagious laughter – she could reduce a whole room to tears of laughter in minutes.

‘She was also gentle, brave and loyal and showed great kindness and courage on many occasions.

‘You could not ask for a more wonderful daughter.’

More than 300 people – including her younger brother Alex, 15 – attended Natasha’s memorial service in December 2016, on what would have been her 16th birthday.

A spokesman for Pret said: ‘We were deeply saddened to hear about Natasha’s tragic death and our heartfelt thoughts are with her family.

‘We take food allergies and how allergen information is provided extremely seriously. We will continue to do all that we can to assist the inquest.’

BA said: ‘We were very sorry to hear of the death of our customer and our thoughts remain with her family.’

Tesla: Musk's tweet a bridge too far?
Pro-Brexit protester admits charge after climbing on to roof of St Pancras
BLACK DOG: Diane Abbott mocked by colleagues over M&S mojito she was spotted drinking on a train...
Brighton boy's hilarious reaction when mum catches him raiding the fridge for food
Humiliated Labour leader refuses to accept blame for his party's crushing defeat
Meghan Markle feels 'free' from 'soul-crushing' royal life, says friend
Natalie Portman says she AGREES with Rose McGowan after Charmed star criticized her
Pete Buttigieg is dropping out of the race for president, according to Politico