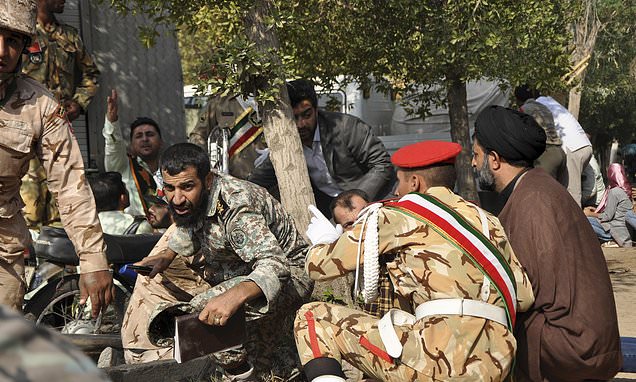 No group immediately claimed responsibility for the assault in Ahvaz, which saw gunfire spray into a crowd of marching guardsmen, bystanders and government officials watching from a nearby platform.

However, Iran faced a bloody assault last year from the Islamic State group and Arab separatists in the region have attacked oil pipelines there in the past.

Terrorists recruited, trained, armed & paid by a foreign regime have attacked Ahvaz. Children and journos among casualties. Iran holds regional terror sponsors and their US masters accountable for such attacks. Iran will respond swiftly and decisively in defense of Iranian lives.

Iran’s Foreign Minister Mohammad Javad Zarif immediately blamed the attack on regional countries and their “US masters”, further raising regional tensions as Tehran’s nuclear deal with world powers is in jeopardy after President Donald Trump withdrew America from the accord.

“Iran will respond swiftly and decisively in defense of Iranian lives,” he wrote on Twitter.

State television aired footage of the aftermath of the assault on Ahvaz’s Quds, or Jerusalem Boulevard, which like many other places around the country saw an annual parade marking the start of Iran’s long 1980s war with Iraq.

The images included paramedics trying to help one person in military fatigues as other armed security personnel shouted at each other.

The semi-official ISNA news agency published photographs of the attack’s aftermath, with bloodied troops in dress uniform helping each other walk away.

The semi-official Tasnim news agency said at least eight members of the Guard had been killed.

Khuzestan governor Gholamreza Shariati told IRNA that two gunmen were killed and another two were arrested.

Who carried out the assault also remained in question.

Iran has been deeply involved in the fight against IS in Iraq and has aided Syrian president Bashar Assad in his country’s long war.

Among those involved are members of the Revolutionary Guard, a paramilitary force answerable only to Supreme Leader Ayatollah Ali Khamenei.

The Guard also has vast holdings in Iran’s economy.

However, those groups in the past previously have only attacked unguarded oil pipelines at night.

Saturday’s attack comes after a coordinated June 7, 2017 Islamic State group assault on parliament and the shrine of Ayatollah Ruhollah Khomeini in Tehran. At least 18 people were killed and more than 50 wounded.

Khomeini led the 1979 Islamic Revolution that toppled the Western-backed shah to become Iran’s first supreme leader until his death in 1989.

The assault shocked Tehran, which largely has avoided militant attacks in the decades after the tumult surrounding the Islamic Revolution.

Mesut Ozil's absence casts shadow over German national...
‘Pedo Guy’ SUES Elon Musk: British cave expert slurred by Tesla boss in row over rescue of Thai boys
Swiss bank UBS reveals 30 per cent of Sydney off-the-plan apartments are selling for a loss
David Attenborough tells leaders at Davos to tackle climate change before damage cannot be fixed
News at Ten to be cut by five minutes to make room for BBC Three
Moment enormous saltwater crocodile launches out of creek
The 100 seats where tactical votes could win it for Boris and Brexit
Documentary claims to have evidence British teenager in Cyprus gang rape case was telling the truth