A toothbrush company has been forced to apologise over its ‘spit or swallow’ advert aimed at female fresher students – after it was branded ‘gross and inappropriate’.

The ad for Brushbox, a -based toothbrush subscription service, was included in a ‘welcome pack’ given to students at the University of Sussex.

It read: ‘Whether you spit or swallow as part of your (twice…) daily oral regime, place your oral health on autopilot with Brushbox.’

The other side of the beermat featured a suggestive close-up of a woman’s mouth as she spits out her toothpaste. 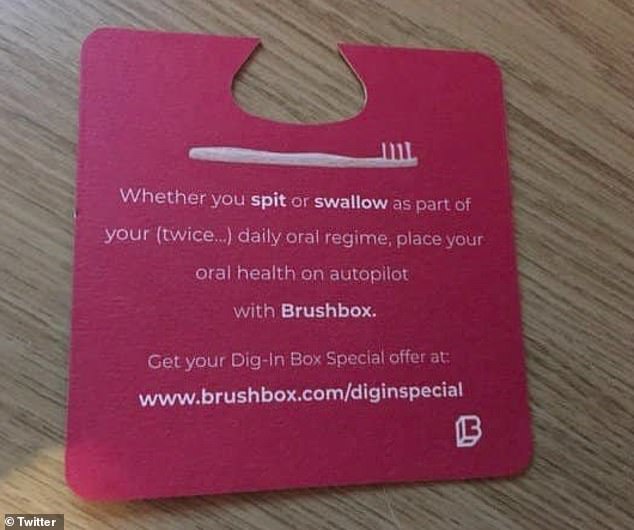 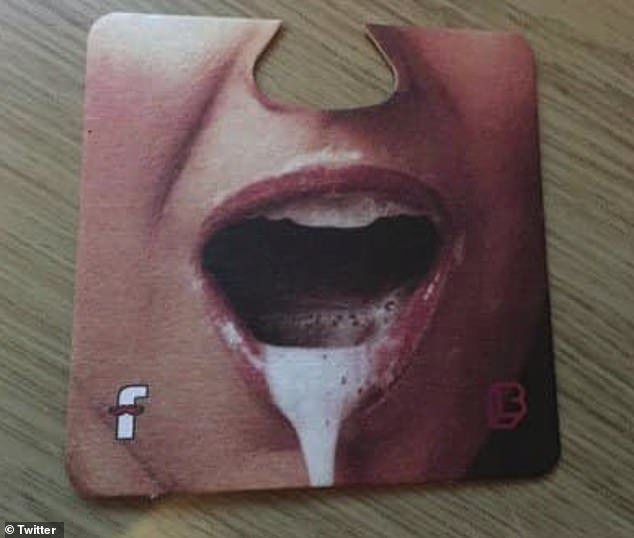 The controversial advert was shared on Twitter by a feminist group called Untameable Shrews, who commented: ‘WTF Do you have any respect for women? This is sexual harassment.’

Another posted: ‘I am not easily offended or into “moral outrage” but this is disgusting’.

Meanwhile, one Twitter user added: ‘Dear god, even toothbrushes have been pornified’. 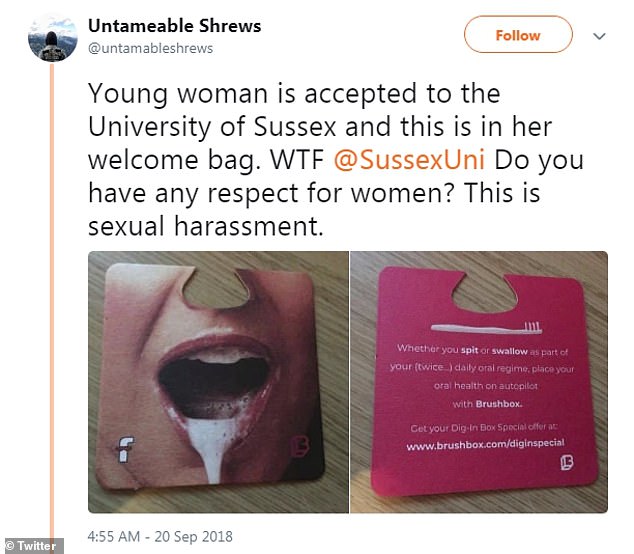 The advert was shared on Twitter by feminist group Untameable Shrews, who wrote: ‘WTF Do you have any respect for women? This is sexual harassment.’

Brushbox has since apologised for the advert, which the company says it now realises was ‘inappropriate and misguided’.

A spokesperson for the company said: ‘We are really sorry if anyone has been offended by the promotional image used on the beer mat which was distributed to Universities.

‘We now realise it was inappropriate and misguided of us to use this type of image as a way to raise awareness of dental health issues.

‘We completely understand that the image could be deemed as derogatory to women and for that we are truly sorry – this was never our intention, and we take full responsibility for any upset it has caused.’

Some Twitter users said they were ‘completely appalled’ by the advert, with one describing it as ‘disgusting’

The spokesperson added: ‘BrushBox is a company which prides itself on its family and ethical ethos and we are very disappointed that something which was meant to encourage good health habits amongst students has caused any offence.’

Meanwhile, the Sussex Student Union said it would be ‘reviewing’ their relationship with the supplier of the welcome boxed.

A statement from the student union, shared on Twitter, read: ‘We were very disappointed to find this promotional material in our Dig-In boxes, and we will be reviewing our relationship with the supplier in future.’

MailOnline has contacted the University of Sussex for further comment.

Individuals share hilarious hidden messages on on a regular basis objects
The marriage traditions which are dying a loss of life in 2018
Lady was bombarded with 150 messages a day by stalker
Balenciaga gets inspiration from Joey Tribiani from Friends for $9,000 coat
Piers Morgan reveals his daughter Elise ordered a $99 game on her iPad
Mother-of-two claims married couples SHOULD sleep with other people
Hilarious gallery reveals the WORST parenting fails ever
Kate approved brand Amaia Kids worn by George and Charlotte at wedding removes promotional post