This is the horrifying moment a heartless sports car driver stops and hurls a puppy from the window before speeding away – leaving a good Samaritan to rescue him.

A yellow Mustang pulls up in a queue of traffic before winding down the window and tossing the one-year-old black poodle on to the tarmac.

The terrified animal is seen scampering away on to the central reservation before the driver hits the accelerator and roars away.

The incident was captured by the dashboard camera of a vehicle travelling behind on Bayani road in Taguig City, Philippines on September 13 at 8am.

But good samaritan Michael Guzman stopped his own car and spent 30 minutes coaxing the dog to safety, which at first was too nervous to trust him.

The pup was then hit by a passing truck, suffering a fractured pelvis. 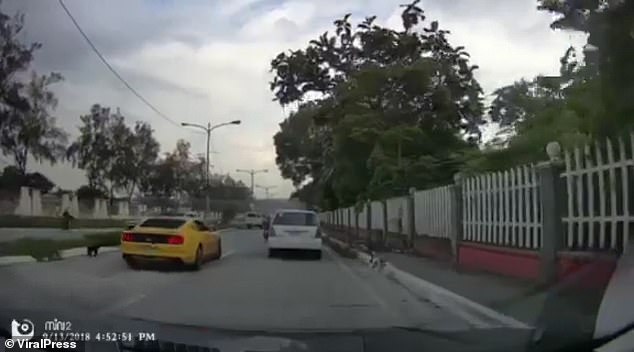 Mr Guzman immediately rescued the animal from any more danger.

He has now adopted the male puppy, named him Goyo, and filmed bouncing around in his loving new home, albeit with a limp from his injured hind right leg.

Mr Guzman said: ‘I was shocked because it happened just in front of me. I was in a hurry but I could not leave it alone.’

He said that he initially tried to pick up the puppy, but it was too scared to let Michael near and he kept running away. 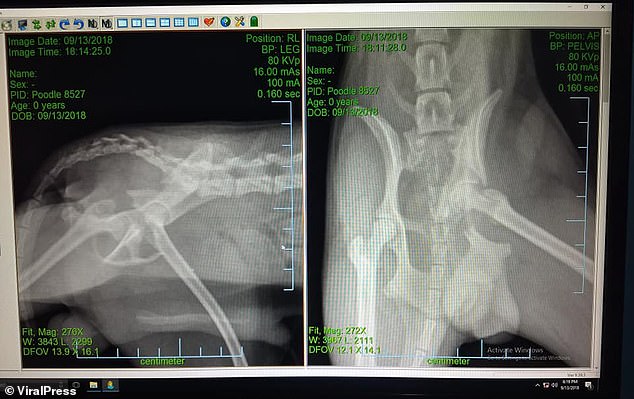 X-rays of the puppy show it has a fractured pelvis but it’s rescuer, Michael Guzman, can’t afford the vet bills

He added: ‘It took me 30 minutes trying to befriend it. Then there were some children walking by and he got scared and ran back into the road.

‘He was hit by a passing L300 van and injured but I picked him up and saved him.’

Michael took the injured dog to the veterinary clinic and decided to adopt him.

Goyo’s pelvic bone was fractured according to the veterinarian who attended to him.

Mr Guzman added: ‘The vet recommended surgery but costs 50 thousand Philippines pesos (£700) which I can’t afford right now. So the other option is months of rest. And of course lots of love and attention to nurse him back to health. 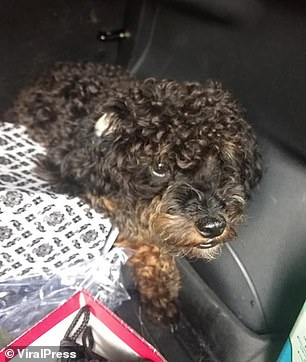 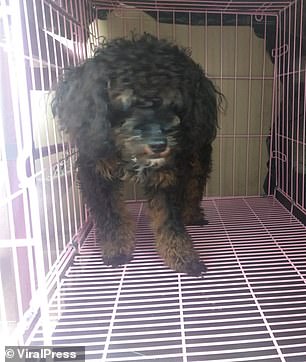 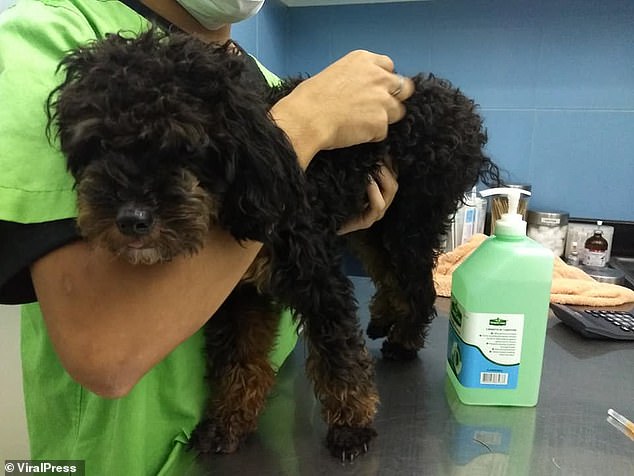 The puppy now named, Goyo, hops around happily on its injured hind leg in the Philippines

‘We will keep saving and looking for a surgeon to help, Goyo.

‘Whoever threw the puppy from the car, well, I have no words for their heartless attitude. But Goyo has a good home now and we will love and care for him.’

The incident is already reported to the police, but they are having a hard time looking for leads because the car does not have a visible number plate.