passengers have been delayed after an apparent computer failure hit the airline’s Heathrow Terminal Five.

Customers complained of queues at the London airport and difficulties checking in after what the company called ‘a technical issue with some of our internal systems’.

Broadcaster Andrew Neil was among those caught up in the problems.

He tweeted: ‘Yet another computer failure at Terminal 5 Heathrow for British Airways. Now regular occurrence. Flights delayed. Usual shambles, not yet on huge scale. 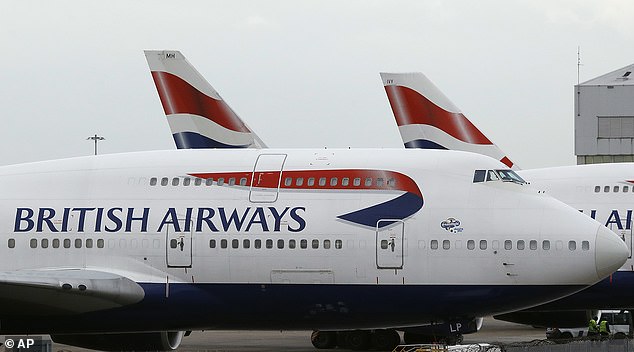 ‘We’re 75 minutes late. And still not taken off. Is that your idea of normal?’

Another passenger, Derek Frome added: ‘”Paralyzed” and “stranded” are not the words you want to hear from your flight status update.

‘The plane is ready to take off, but we’re stuck waiting in the terminal because the computer system for boarding is down and there’s no backup system.’

Seb Reilly wrote: ‘I think somebody at your organisation should press Ctrl+Alt+Delete and just start again. 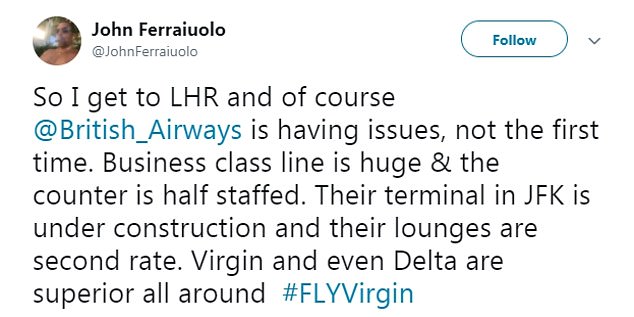 ‘You have a new problem (excuse!) every day, you are losing loyal customers across the board and your once prestigious brand is now in the gutter. Shameful.’

Despite the slew of complaints, a company spokesman insisted to MailOnline that there was not a computer failure at Terminal Five.

She said: ‘A temporary glitch with some of our internal systems has been resolved. Our customers have continued to check in and fly to their destinations as normal.’ 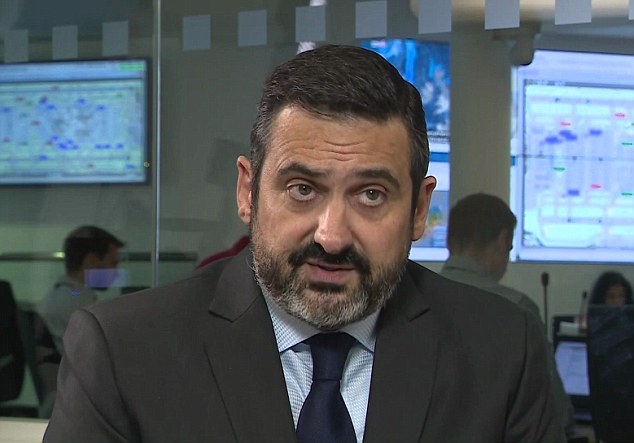 Earlier the airline had posted a tweet saying: ‘We are working to resolve a technical issue with some of our internal systems, including our call centres. Flights are continuing to operate and customers are able to check in as normal.’

They tweeted to another customer: ‘Flights are still operating, however, there may be delays.’

Earlier this month, British Airways boss Alex Cruz issued a grovelling apology to customers after the firm’s website was hacked, affecting around 380,000 transactions.

Speaking about what data was hacked, he said: ‘It was name, email address, credit card information – that would be credit card number, expiration date and the three digit [CVV] code on the back of the credit card.’

British Airways rolled out a ‘cost effective’ IT system in October 2015.

But since launch it has caused a host of problems, costing the company more than £80million.

Workers say that it crashes ‘all the time’, while one source claimed last year that check-in staff have even been reduced to tears by regular glitches.

– In July this year BA customers flying from Heathrow the IT system failed leaving thousands of passengers stranded in London.

– In May 2017 more than 670 flights were cancelled due to a power failure over the spring bank holiday weekend. Customers claimed compensation for flight costs, train and hotel expenses, replacement clothes and toiletries. It cost the company £80 million.

– In September 2016 angry travellers complained of hours of queuing at airports after an IT glitch hit check-in systems.

Travellers across the UK and U.S. complained of lengthy queues due to the technical problem, and passengers were warned of heavy delays.

It is the latest in a series of technical glitches with BA’s new ‘FLY’ check-in system which was rolled out in June in a bid to speed-up passengers’ journeys.

However, the system has been besieged by problems causing huge delays to thousands of passengers around the globe.

British Airways began installing its new system at airports across the world in October 2015 and the roll-out was completed around June.

BA, which is run by parent company IAG after it merged with Spanish giant Iberia in 2011, is in the process of cutting costs, including across its IT department.

The latest computer glitch is the sixth BA systems failure in a year-and-a-half , with similar problems last year on June 19, July 7, July 13 and again on July 18.

British Airways rolled out a ‘cost effective’ IT system in October 2015.

But since its launch, the system has caused a host of problems, costing the company more than £100 million.

Workers say that it crashes ‘all the time’, while one source claimed last year that check-in staff have even been reduced to tears by regular glitches.

– In July this year BA customers flying from Heathrow the IT system failed leaving thousands of passengers stranded in London.

The new BA ‘FLY’ system first broke down on June 19 last year, just weeks after first being introduced. Both of London’s major airports were affected with people moaning of ‘hour-long’ delays when the IT glitch brought down the check-in systems and boarding gate systems.

The system then suffered another failure on July 7, 2016, with some holidaymakers even turned away from their flights due to the chaos. Two-hour, seven-lane queues formed at all BA check-in gates at Terminal 5 at London Heathrow as staff struggled to deal with the huge numbers of people. First and business class passengers were the worst affected.

The IT glitch came as several families were looking to get away on holiday after private and Scottish school terms ended for the summer. There were also claims that there were not enough seats on flights because of allocation problems with the booking system, while a couple was also turned away from a flight to Japan where they were due to marry. 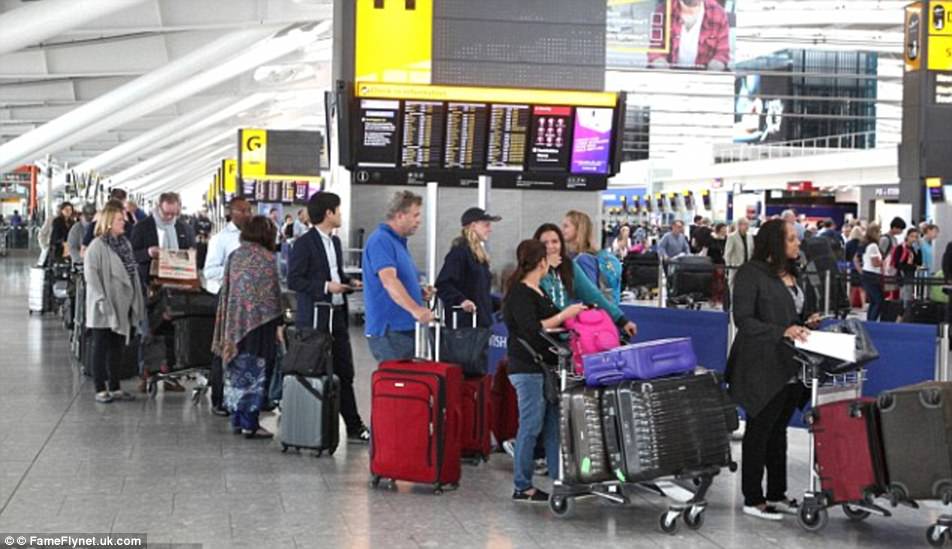 Less than a week later and the check-in system broke down yet again. On July 13, lengthy queues formed once again at Terminal 5, Heathrow after the ‘FLY’ system suffered further technical problems

Five days later it broke down once again and on this occasion TV presenter Phillip Schofield was among those to berate the airline for the delays. He took to Twitter to live tweet his ordeal after missing his British Airways flight on one of the busiest flying days of the year.

The TV star, 54, waited for two hours after the airline’s check-in computer system stopped working at the flagship Terminal 5 at London’s Heathrow, before having to go home again.

The IT glitch also hit Gatwick and caused huge queues as hundreds of thousands of families start going away for their summer holidays. Long queues snaked across terminal buildings as irate passengers said BA workers were nowhere to be seen or ‘pretending to be on the phone’.

In a series of social media posts, Mr Schofield said: ‘In the queue two hours and not one member of staff to talk to. Love you usually, today you are s***’. He added: ‘There’s no announcements, no info when the planes left, no help at all’. 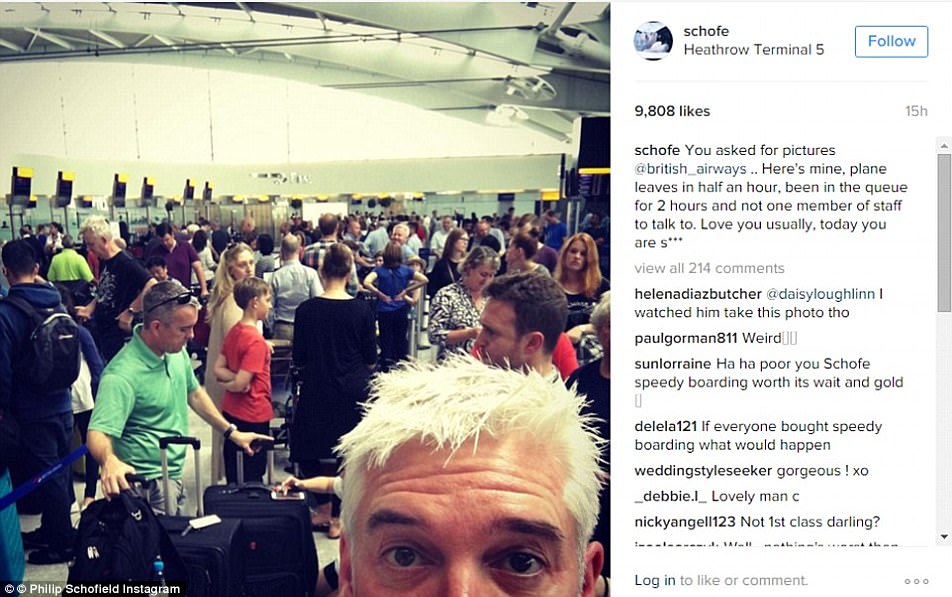 TV presenter Phillip Schofield was among those to berate the airline for the delays when it suffered yet another IT glitch on July 18, 2016. He took to Twitter to blog his ordeal after missing his BA flight on one of the busiest flying days of the year

A few hours later, having given up, he said: ‘On our way back home then @British_Airways’.

On September 6, 2016, another IT glitch caused serious problems with the airline’s check-in systems around the world.

Travellers across the UK and U.S. complained of lengthy queues due to the technical problem.

Pictures of the chaos posted online showed passengers stranded with their bags at check-in desks in major airports around the world including London Gatwick, Heathrow, Edinburgh and Newcastle in the UK, and Chicago O’Hare International Airport, San Francisco, San Diego, Las Vegas, Phoenix, Atlanta and Seattle in the US. 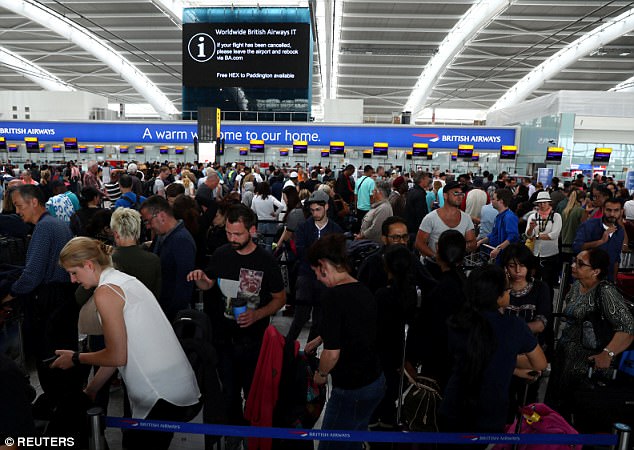 In May this year and IT engineer allegedly failed to follow proper procedure at a Heathrow data centre and caused ‘catastrophic physical damage’ to servers leaving 75,000 stranded across the globe.

In May this year and IT engineer allegedly failed to follow proper procedure at a Heathrow data centre and caused ‘catastrophic physical damage’ to servers leaving 75,000 stranded across the globe.

The outage lasted just 15 minutes but it stopped online check-in, grounded planes and broke baggage systems and meant BA was unable to resume a full schedule for four days.

Some passengers were still waiting to be reunited with their luggage almost a week on in five days of chaos for the airline.