Friends and family gathered for the funeral of a Brazilian student who became the first fatal shark attack vicitm in Massachusetts for more than 80 years.

Arthur Medici, born in Vitoria, , was bitten by a shark Saturday while boogie boarding off Wellfleet. He later died from his injuries in hospital.

A funeral service was held for the 26-year-old at the First United Methodist Church-Brazilian Ministry in Saugus on Wednesday where hundreds of mourners turned up to pay their final respects.

Friends were seen crying and clinging to each other for comfort outside the church before the service which was held in Portuguese but translated into English.

His fiance Emily Rocha, 23, the daughter of Pastor Cleverson Rocha who led the service, described him as ‘a man of courage and love, selfless, and with a heart of gold’, the reported.

‘He loved sports, singing, and playing the guitar. He also loved his family and to make ‘everyone around him laugh,’ she said.

‘His laugh could be heard across the room,’ her father added. ‘Now, we miss him.’

The engineering student’s body is now due to be returned to his native Brazil for burial. ‘We all want him here,’ Arthur’s father, Itamar Medici, who is still in the southern American country, told WBZ-TV. 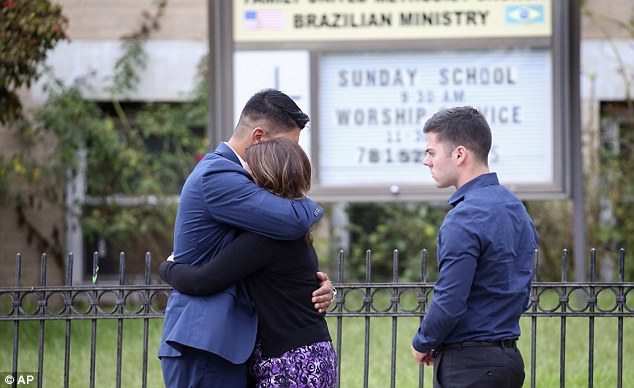 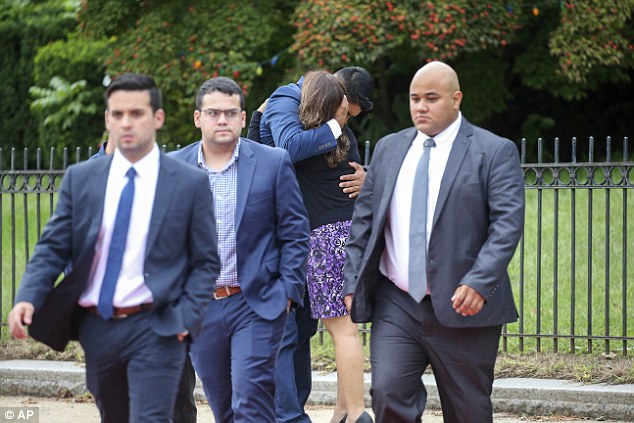 Dozens of family and friends attended the service Wednesday. Medici’s body will later be returned to his native Brazil

Medici studied engineering at Universidade Vila Velha in Brazil before moving to the United States two years ago to study at Bunker Hill Community College in Boston.

He was happily engaged to a medical student, and worked at Boston-area restaurants to supplement his education. He was also an active member of the Maranatha Christian Church in Revere and loved the outdoors.

Grieving family and friends described the late Medici was ‘happily engaged to a smart, kind-hearted medical student with a bright future.’

‘He loved life, he was an active member of a Christian church, devoting his life to the Lord. He participated in the praise group of the church in Revere and was very involved in all of the church activities.

‘He will be remembered for his great sense of humor, selfless ways and huge heart,’ his obituary read.

Sandra Muniz and Francisco Pinto, both from Woburn, worked with Medici at The Capital Grille in Burlington.

They said he was always singing, dancing and laughing with them.

‘Always dancing. Music was his thing,’ Pinto added. ‘He was a happy guy.’ 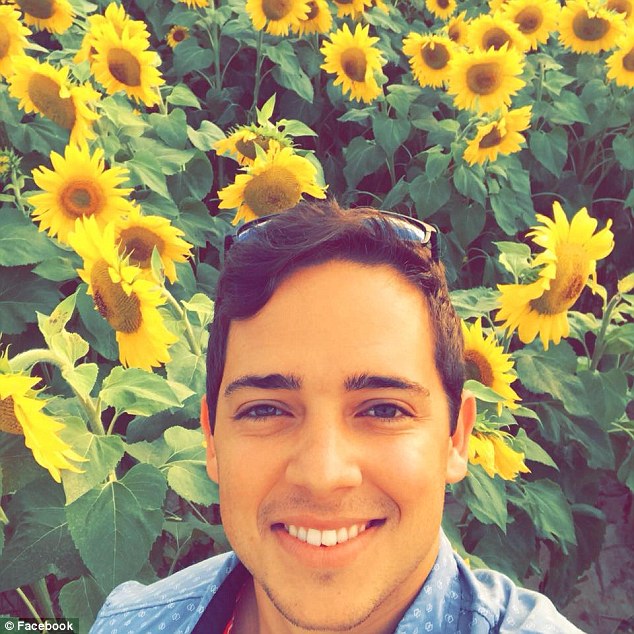 Arthur Medici, 26, from Revere, Massachusetts, died after a shark attack on a Cape Cod beach on Saturday 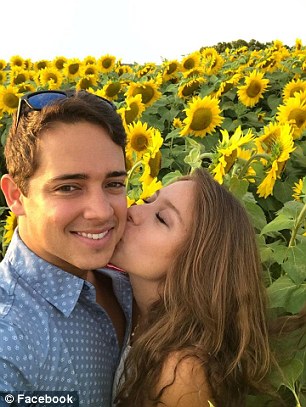 Medici pictured with fiancé Emily Rocha. Her brother was with Medici when he was attacked

‘He loved hiking, biking, surfing and various other sports. There was never a bad time for him. He was always joyful and willing to help others, even going as far as feeding the homeless.

Others described him as a devout Christian who was humble, kind and always willing to help others.

‘Our lives are are never going to be the same without him. His laughter filled our home and he will be greatly missed by us all.’

Medici was attacked Saturday afternoon when he was boogie boarding with his fiancé’s brother at Newcomb Hollow Beach in Wellfleet, police say.

The Cape Cod National Park Service reported that at 12.30pm the Revere man was knocked off his board then attacked by the shark. Police identified him Saturday evening.

Following the attack, Medici was brought to the shore by his friend where CPR was performed on him and beach goers tried to make a tourniquet to stop the blood flow, according to .

He was taken to a Cape Cod Hospital in Hyannis where he died, State Police spokesman David Procopio said in a statement. The details of his injuries have not been revealed. 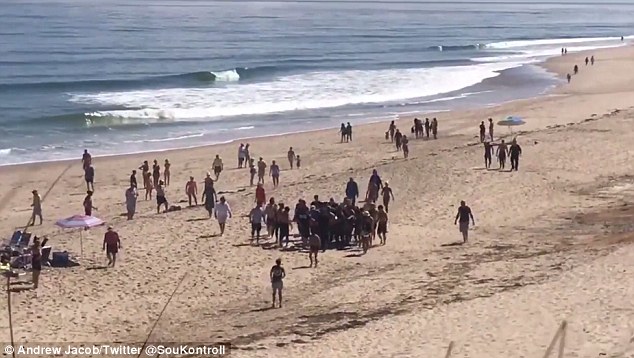 The Cape Cod National Park Service reported that at 12.30pm the Revere man was knocked off his board then attacked by the shark 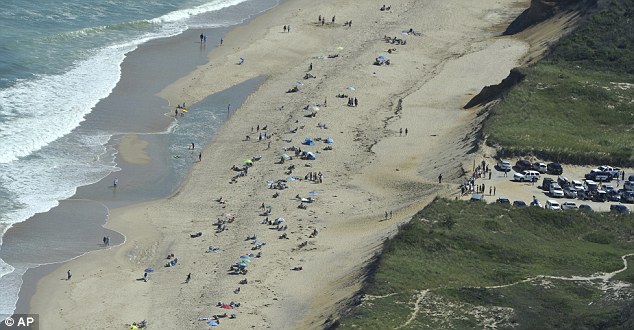 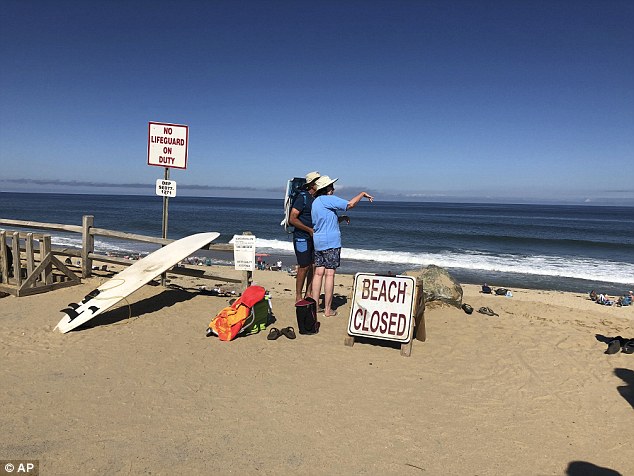 Newcomb Hollow Beach in Wellfleet was closed following the attack. Medici was rushed to the hospital where he died

The beach was closed after the attack and police released his identity Saturday evening.

Local fisherman and surfer Joe Booth said he was on the shore and witnessed the shark’s strike. He said the victim aggressively kicked something behind him then he saw a flicker of a tail in the water.

‘I was that guy on the beach screaming ‘Shark, shark!’ It was like right out of that movie Jaws. This has turned into Amity Island real quick out here,’ Booth said .

A California surfer on the beach, who chose to remain anonymous, told the  that he saw Medici unconscious and heavily bleeding from his right leg.

‘I saw that he was bleeding and reached around the back of his leg, and there was nothing there. And there were bone-deep lacerations down by his calf,’ he said.

Surfer Andrew Jacobs shared video of dozens of Good Samaritans carrying the victim’s body away from the water. 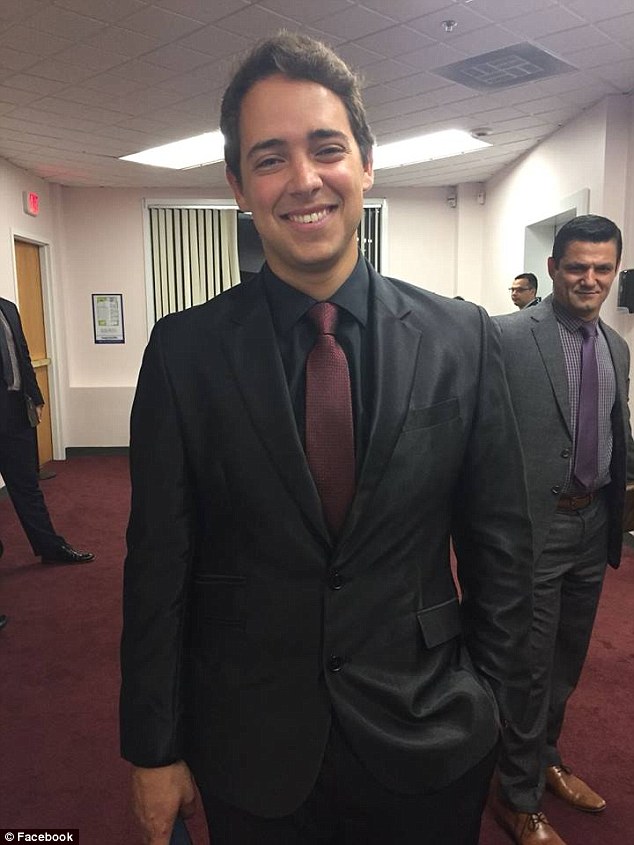 Medici was born in Brazil and came to the United States two years ago to attend college. He was described by friends as being sweet and humble

‘Pretty sad day at the beach today. Amazing effort by everyone who jumped into action to help this young man out. Prayers to him and his family,’ Jacobs captioned his video.

Former lifeguard and witness Hayley Williamson said she was shocked to hear of the attack.

‘We’ve been surfing all morning right here and they were just further down. Right spot, wrong time, I guess,’ she said to .

‘Today is just keeping everyone out of water. There’ll be a determination later about what the town wants to do with the beaches going forward,’ Wellfleet Police Lieutenant Michael Hurley said.

The Saturday incident is the state’s first shark attack fatality since 1936. This is the second shark attack to take place in Cape Cod this summer.

On August, 15 a 61-year-old New York man was severely injured after fighting off a shark off Truro, Massachusetts, four miles north of where Saturday’s attack took place. He’s recovering from his wounds in a Boston hospital. 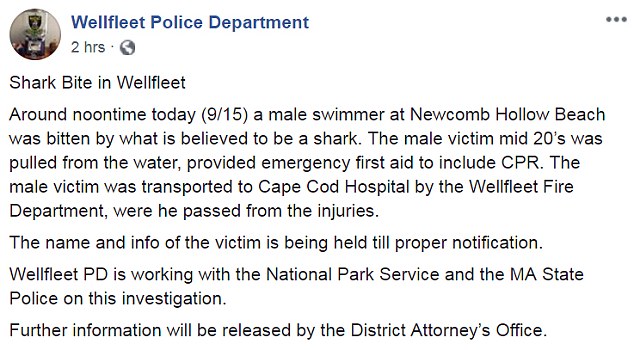 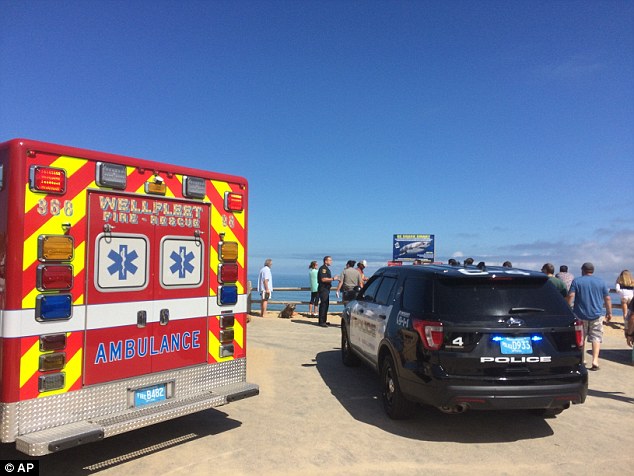 Police responded on the scene immediately after the attack. CPR was performed on Medici and he was taken to the hospital where he was pronounced dead 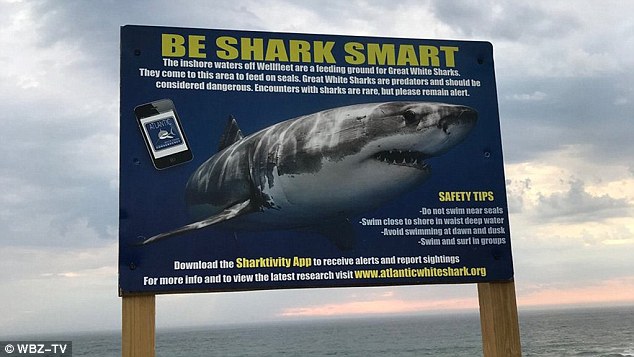 Newcomb Hollow Beach, where Medici was swimming, has a sign saying ‘Be Shark Smart’ warning swimmers to avoid going near seals and to swim near the shore

Newcomb Hollow Beach, where Medici was boogie boarding, has a sign saying ‘Be Shark Smart’ warning swimmers to avoid going near seals and to swim near the shore.

‘The inshore waters off Wellfleet are a feeding ground for Great White Sharks. They come to this area to feed on seals. Great White Sharks are predators and should be considered dangerous. Encounters with sharks are rare, but please remain alert,’ the sign said.

Wellfleet beach is popular with surfers and was busy on Saturday, even though lifeguards were no longer on watch as the summer season is over.

The Wellfleet Police Department reported the incident on Facebook shortly afterwards saying it is believed to be a shark bite attack.

Police did not name the victim until Saturday evening.

The attack is being investigated by State Police and the Cape and Islands District Attorney’s office.