A journalist has branded women who apply their makeup on the train ‘selfish’ because it is ‘visually polluting’ for their fellow commuters.

Speaking on Good Morning Britain, Nina Myskow, 72, said women should know there are ‘boundaries’ on what is acceptable on the train, and a makeup routine should be carried out in ‘private’.

She told Jessica Cunningham, 31, that she should ‘get up earlier’ after The Apprentice star said she does her makeup on her two hour train journey in order to have more time to spend with her four children in the morning.

Ms Myskow’s comments were slammed by viewers, who said there was ‘no harm’ in doing makeup on the train. 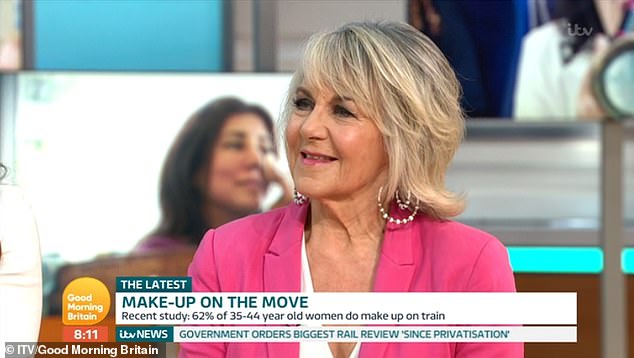 Journalist Nina Myskow, 72, said women who do their makeup on the train are ‘selfish’ because it is ‘visually polluting’ for other commuters. Pictured: Nina on Good Morning Britain on Thursday

The GMB panel was debating the matter after a  revealed that one of male commuters’ biggest pet peeves is women doing their makeup on the morning train to work.

Ms Myskow said she has seen women do it on her journey, with one woman getting bronzer on the man next to her and another squeezing her blackheads in her makeup mirror in front of the other passengers.

She said: ‘Like on social media, people have forgotten there are personal boundaries and it is quite selfish. If you want to do it on the tube that’s entirely up to you, if you can’t get yourself together, if you’re too lazy. Get up earlier.’

Ms Cunningham said she was ‘utilising her time’ by doing her makeup on her journey into work and asked her opponent in the debate how it was selfish.

Ms Myskow’s comments were slammed by viewers on Twitter, who said there was ‘no harm’ in doing makeup on the train

Ms Myskow answered: ‘It’s visually polluting and secondly there’s hairspray that’s going on or nail varnish that smells. I sat next to a woman on the tube last week that got a big brush out into the bronzer, it went tap, tap, tap and it went all over the man next to her.’

Reality star Jessica admitted to doing her makeup, as well as plugging in her straighteners to fix her hair, but claimed she always asked other people in the carriage if they had any objections to it first.

She said: ‘I’d rather just straighten my hair or make myself look a bit more presentable on a train when I’ve got a good two hours than miss two hours putting my kids to bed.’

The journalist disagreed, saying she was ‘disrespecting’ other people on the train. 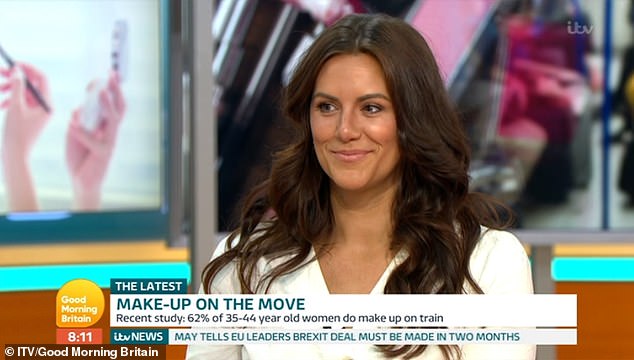 Jessica Cunningham, 31, said she does her makeup on her two hour train journey in order to have more time with her four children in the morning. Pictured: The Apprentice star on GMB 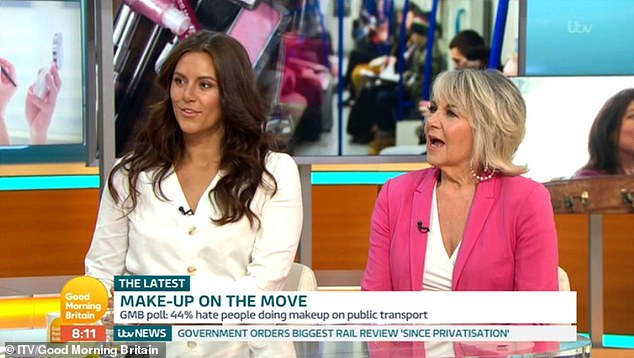 Ms Myskow (right) said women who are guilty of it don’t have ‘enough self-respect’, but Jessica (left) said she always asked people in her if they had any objections to it first

‘Don’t you have enough self-respect to keep the private things private?’ she fired back.

Her comments were criticised by GMB viewers, with one tweeting: ‘How is putting on makeup a ”private” matter? It’s just face paint essentially.’

A third said: ‘Can someone please explain how doing your makeup on the train is selfish and arrogant and something that should ‘be done privately’ I legit can’t even see a slightest problem????’

Influencers reveal the best way to acquire extra Instagram Story followers
Daybreak Ward reveals her husband SITS right down to go for a pee
Susan George says you need to at all times rise up for your self
IKEA Australia Christine Gough designer shares tricks to maximise storage and minimise muddle
Woman reveals her horrific injuries from a head-on collision
My lightbulb moment: Designer Jade Holland Cooper
Blogger behind 'transphobic' billboard blasted by This Morning fans
Queen looks resplendent for a Sunday church service with Charles and Camilla at Balmoral