Amazon is taking the wraps off of a slew of new devices.

During a pop-up event at its Seattle headquarters, the tech giant unveiled a brand new version of its Echo Dot, which features big boosts to its sound quality – broadcasting sounds at 70 percent louder volumes.

The revamped Echo Dot, which the firm said is it’s best-selling speaker ever, is expected to begin shipping next month and costs the same as prior versions at $49.99.

The microwave is priced at $60 and buyers must already own an Alexa-equipped speaker to take advantage of voice commands.

Alongside the microwave, Amazon announced a new Echo Plus, Amazon Smart Plug, Echo ‘Input,’ amplifier, subwoofer and wall clock, among other things. 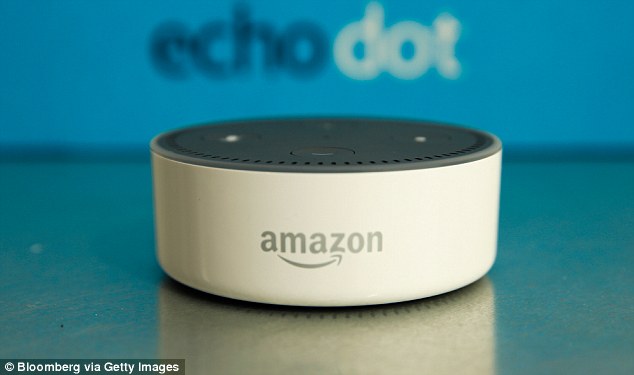 Amazon is taking the wraps off of a slew of new devices. At its product event in Seattle, the firm unveiled a sequel to the Echo Dot with better sound. Pictured is the original Echo Dot

The Echo Plus features a new design, improved bass, and a built-in temperature sensor, among other things.

What’s more, users can even check the time or turn on their lights even when the internet is down, thanks to new cloud-based capabilities.

Amazon says the Echo Plus is available for pre-order today and will begin shipping in October.

The announcements come as two Amazon products accidentally leaked hours ahead of the event.

The Amazon Smart Plug, which plugs directly into a wall socket and acts as controller for any mains-connected device, is expected to bring Alexa voice control to any gadget.

It is rumoured the Smart Plug will allow users to flick on the kettle or turn on a lamp with a simple voice command.

The leaked images, published on the Amazon online store, arrive amid a flurry of rumours of eight new Alexa-powered device scheduled to launch this year.

The new batch of in-house hardware could include a microwave, amplifier, receiver, and an in-car gadget,  reported, citing sources close to the company. 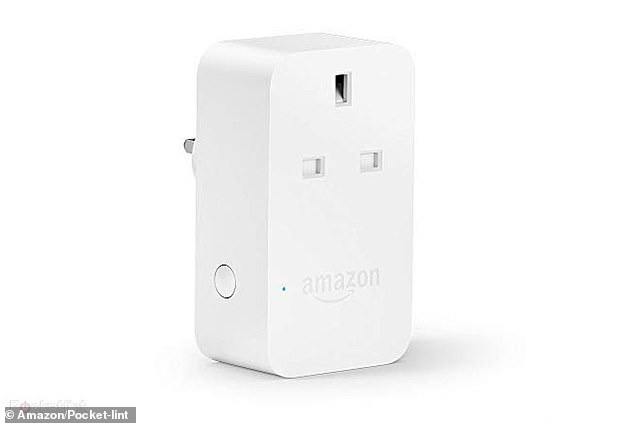 Amazon’s upcoming Smart Plug (pictured) has been leaked online ahead of its imminent release. The device will plug directly into a wall socket and is expected to bring basic Alexa voice control to any device

The images of the unannounced plug were spotted by technology blog .

Amazon’s website also revealed the price of the upcoming gadget to be £95 ($125).

If this proves accurate, the Amazon Smart Plug would be one of the most expensive voice-assistant enabled mains plugs available.

Pocket-lint also unearthed another unannounced gadget – an Echo-branded sub-woofer, which is widely-tipped to be announced at a long-rumoured Amazon hardware press event next month alongside the Alexa-powered plug.

The product has purportedly been dubbed the ‘Echo Sub wireless subwoofer’ and is rumoured to add around 100W of bass to an Echo device with the six-inch sub. 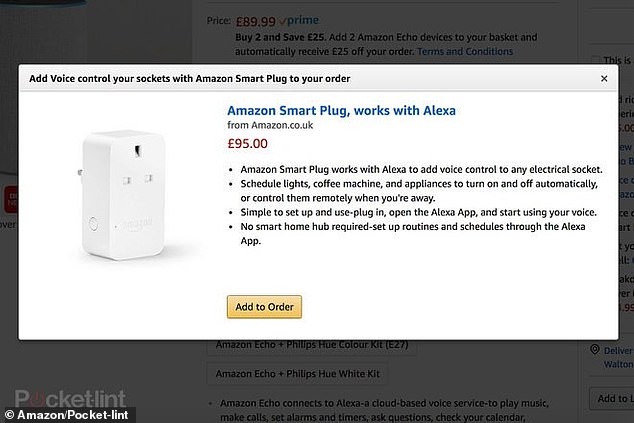 Amazon’s site also revealed the price of the upcoming gadget to be £95 ($125) (pictured). If this proves accurate it would place Amazon’s product atop the field of smart plugs as the most expensive in the market 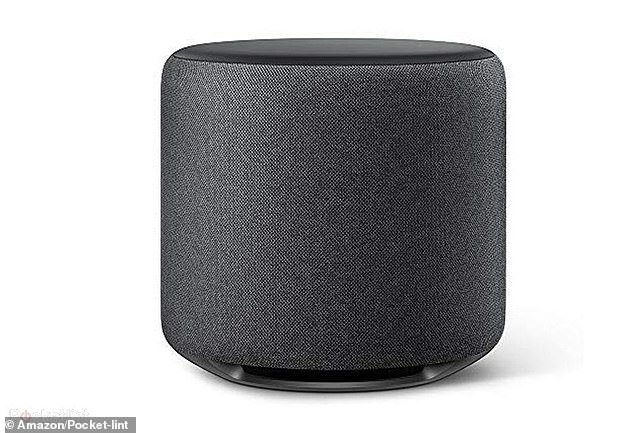 Another unannounced gadget in the shape of a sub-woofer was spotted on the site (pictured). This is thought to be formally announced on October 11 at a rumoured Amazon Hardware exhibition 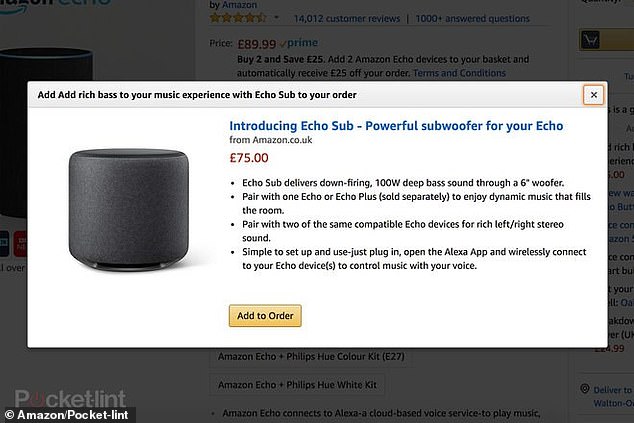 Previous Echo devices have only featured the ability to group speakers, not pair them together for stereo audio.

Both items would see Amazon branching out into unfamiliar territory as it seeks to further the reach of its technological empire.

The leaked images come days after internal document obtained by CNBC revealed that new Amazon devices are scheduled to launch before the end of this year.

Some of the devices will have Alexa built in, while others will be able to connect to the voice assistant.

Alexa is already linked up with several devices in the smart home market, ranging from voice-controlled thermostats, coffee makers, light bulbs and many more items.

The CNBC report also suggests that Amazon could eventually use its Alexa-equipped smart home devices as an in with home builders.

It previously announced a partnership with home construction company Lennar to include two Echo speakers in new homes and offered at-home visits from Amazon technicians.

Amazon has signaled that it wants Alexa to be in more places than just your bedroom or living room.

‘We want customers to be able to use Alexa wherever they are,’ Amazon CEO Jeff Bezos said in the firm’s most recent earnings report.

‘There are now tens of thousands of developers across more than 150 countries building new devices using the Alexa Voice Service, and the number of Alexa-enabled devices has more than tripled in the last year.’

Ole Gunnar Solskjaer announced as Manchester United interim manager by accident
Labour could unseat Theresa May 'by Wednesday' warns Downing Street
Ant McPartlin returns to Britain's Got Talent after one year break
'Fakeaway ' diet dishes so tasty you'll pinch yourself!
British backpacker claims she was lured into slave labour at a Bundaberg region fruit picking farm
UK weather Met Office danger to life warning one month of rain due to fall in a day today
Boy, 14, is fighting for his life after 'crashing electric scooter into a bus stop'
YouTuber, 41, is one of two people arrested after mass brawl kicked off on P&O cruise liner