A woman who almost threw out an old handbag that had been lying in a damp garage for seven years has revealed her shock after discovering the bin-bound accessory is an Art Deco gem worth £3,800.

Linda Pritchard, a dinner lady from Denbigh, Wales, found the chainmail gold bag gathering dust in her sister Margaret’s garage and was close to dumping it at her local skip.

However, 61-year-old Linda, who has poor eyesight, took the bag along to her local optician to check whether the bag carried a hallmark. 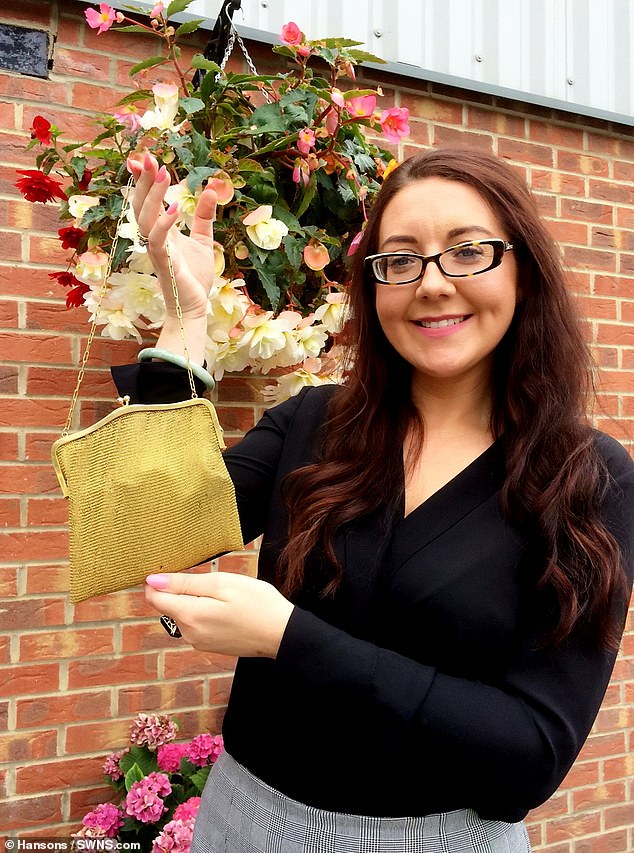 Valuer Jane Williams, from antiques house Hansons, pictured with the bag that Linda Pritchard, from Denbigh, Wales, found in the garage of her sister Margaret’s house. The pair had initially decided to throw the bag out…but asked a local optician to check for a hallmark 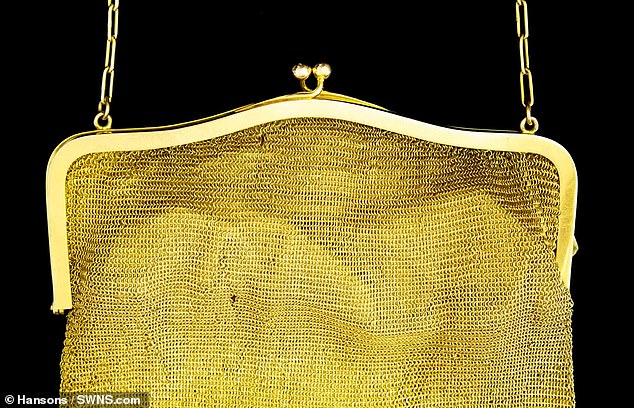 The Art Deco bag had in fact once belonged to socialite Dora Jones, who took it aboard cruise liner holidays in the 40s and 50s, and found its way into the Pritchard sisters’ hands after her husband, Gwyn Jones, was cared for by Margaret and gifted it to her

And she was stunned when she discovered it was in fact made of 15 carat gold and had once belonged to a wealthy socialite, Dora Jones, in the 1950s.

Inside the bag contained photographs and documents showing it was an Art Deco Emanuel Joseph design made in 1913.

Linda’s sister Margaret, 59, a shop worker also from Denbigh, explained how the siblings came to own the bag: ‘I used to care for a gentleman called Gwyn Jones and he left the bag to me, which belonged to his late wife Dora, when he died.

‘It ended up languishing in a garage for seven years, lost amid personal letters and photos.

‘I kept Mr Jones’ things in Linda’s garage because I didn’t know what to do with them. 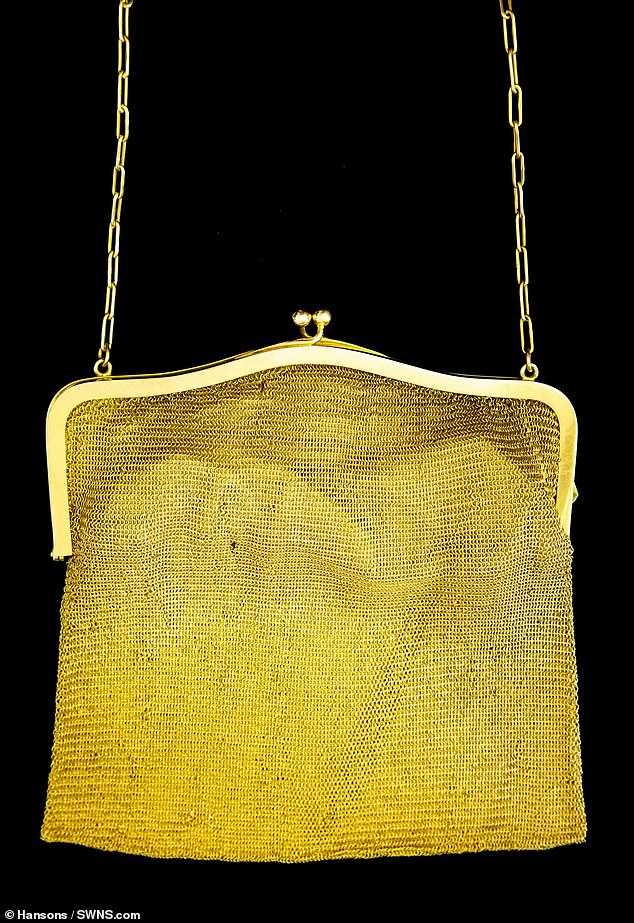 After spotting the hallmark, the optician advised the sisters to get it professionally valued, where it was identified as a Emanuel Joseph design made in 1913. The bag has its original leather lining 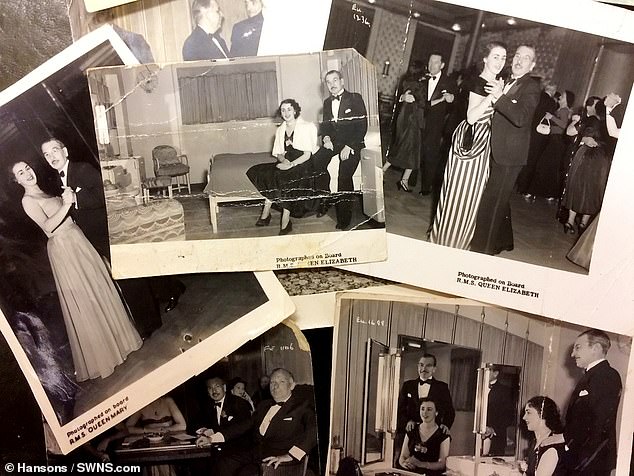 ‘They were someone’s personal items. They were there for a number of years until Linda wanted to clear out the garage.

‘One day we went to sort it out and, as things were a bit damp, I started to throw things in the bin.

‘We came across the bag and I just thought we would never use this, so said to Linda ‘get rid. But she kept it. I never gave it a second thought.

‘But later that night, I thought ‘why would Mr Jones keep this, the only thing left from his wife?’

Dinner lady Linda, 61, also from Denbigh, said: ‘Margaret thought the bag was junk but I wasn’t so sure.

‘I haven’t got very good eyesight so I took it to my optician’s and said, ‘Can you do me a favour, can you see if there’s a hallmark?’

‘I thought he could look at it with his magnifying equipment. He told me it was 15 carat American gold.

‘I was flabbergasted, it almost ended up in the bin. It could have gone to the tip.’ 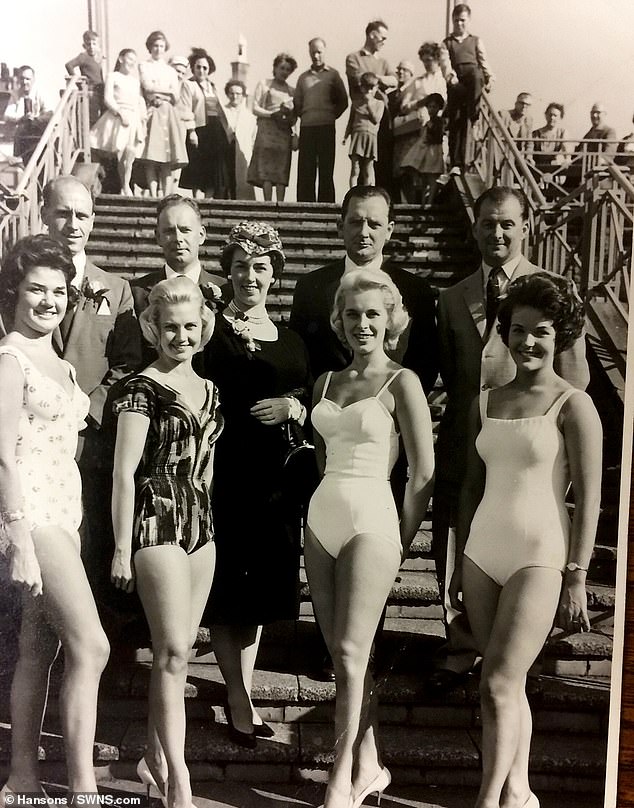 Vintage: The handbag came with a variety of photos captured on board cruise liners in their heyday, with bathing suit competitions 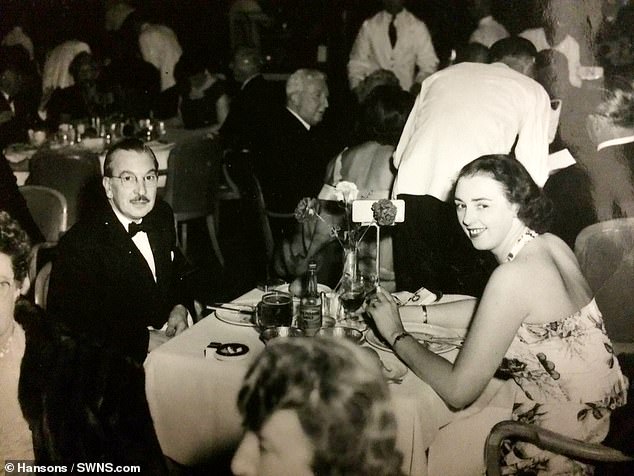 Dora with her first husband David Archibald, from Southport, enjoying life aboard the Queen Mary. She went on to marry Gwyn Jones who eventually gifted the bag to Margaret Pritchard 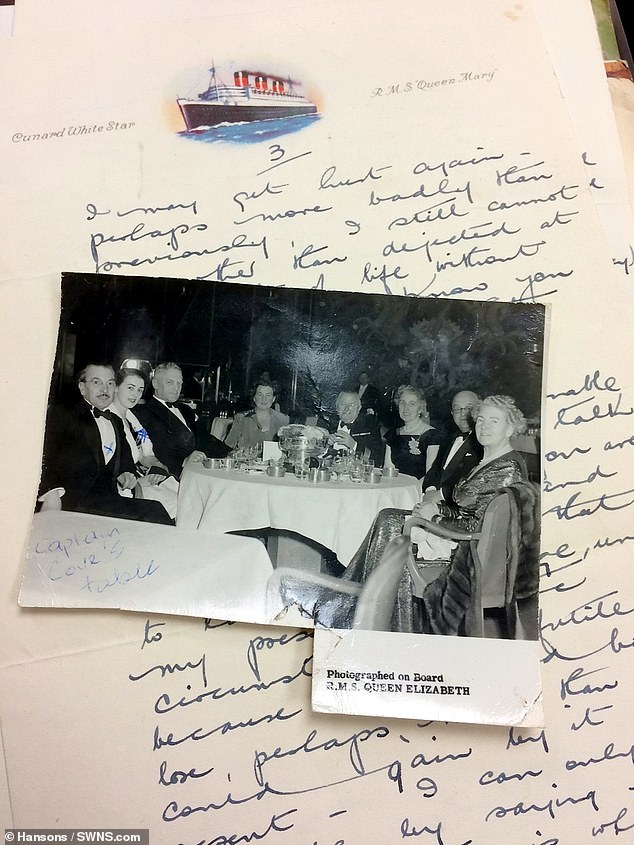 Notes were also found in the handbag detailing voyages taken around Europe, including this photo of ‘Captain Cove’s table’

The bag has its original leather lining and is thought to have royal cruise ship pedigree.

It was found tucked away amid atmospheric images of life aboard RMS Elizabeth and RMS Queen Mary in the 1940s and 50s.

Tne bag is expected to fetch around £3,800 when it goes under the hammer at Hansons Auctioneers in Derbyshire next month.

Valuer Jane Williams said: ‘We know from all the paperwork and images found with the bag that it belonged to Dora Jones, a wealthy socialite once married to David Archibald, of Birkdale, Southport. 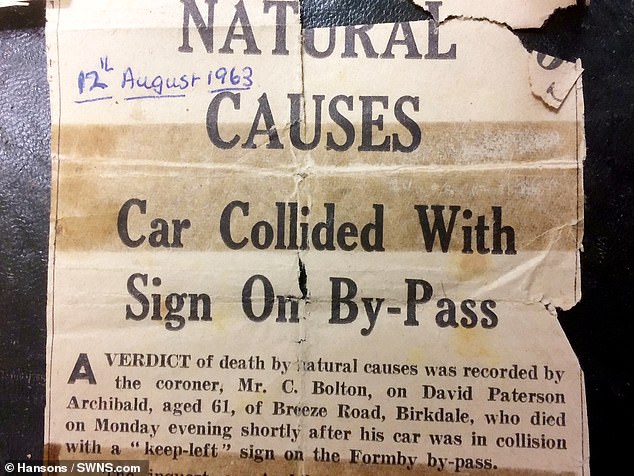 ‘David, general secretary of the North Atlantic British Liner Committee, received an OBE in 1948 for services to the shipping industry.

‘The bag comes with amazing provenance including numerous photos of the couple aboard RMS Queen Mary and RMS Queen Elizabeth, which is why we believe it may have been used on glamorous journeys between Southampton and New York where the cruise ships operated.

‘He died suddenly, aged 61, in 1963 after his car was in collision with a keep-left sign. A newspaper cutting reveals he had a heart attack at the wheel.

‘All the letters and pictures of happy times aboard RMS Queen Mary, which operated from 1936 to 1967, and RMS Queen Elizabeth, which entered service as an ocean liner in 1946, were treasured by Dora, who later married Mr Jones.’

How bloggers are paying as much as £20 for EMPTY bottles
Sophie Guidolin, 29, shares the key to discovering steadiness between train and household
Peanut launches being pregnant float with gap for expectant mothers' bellies
The one eyeshadow colour that has seen a 200 per cent increase in popularity in 2018
Victoria Beckham fans recreate carrier bag campaigns at home
Fitness fanatic Bakhar Nabieva nicknamed Miss Iron Bum
Mother gets the giggles as she tries on on a pink Boohoo jumpsuit
Toothbrush company apologises over its 'spit or swallow' advert aimed at female fresher students