The woman alleges Winston, 24, grabbed her crotch in the drive-thru of a Mexican restaurant in the Phoenix area in March 2016.

She is seeking more than $75,000 in damages in the suit, filed in Arizona on Tuesday, court documents say.

‘She is unimpressed by his continued lack of honesty or awareness into his behavior,’ the woman’s attorney, John Clune, told the 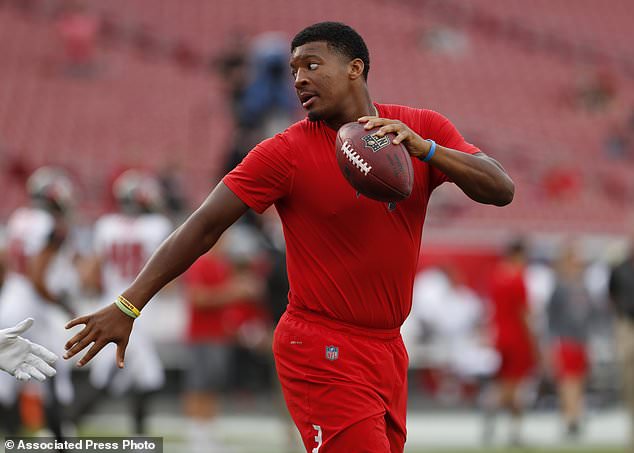 ‘Maybe a more direct financial penalty will get his attention. He needs to learn from this and have some genuine insight or pay the penalty.’

He added: ‘She knows that she might be just a speed bump for him in his football career, but she is not going to be a small one.’

The woman said she came forward in the fall of last year because of the growing MeToo movement.

She told BuzzFeed News that she had been driving Winston back from a party in Scottsdale at around 2am on March 13, 2016, when he ‘reached over’ and grabbed her.

In the immediate aftermath of the incident, she filed a report with Uber claiming that the NFL player ‘put his fingers’ on her crotch and said he was ‘NOT safe for other drivers.’

She said while the vehicle was stopped, Winston ‘reached over and put his fingers on my crotch.’ 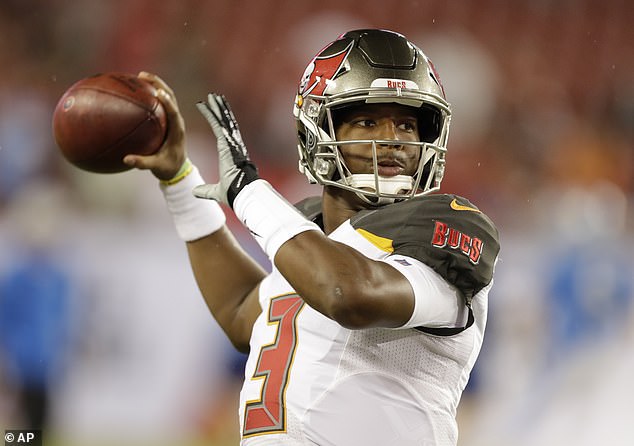 ‘It wasn’t accidental, and it was only for a very brief moment,’ she said.

‘It wasn’t my stomach or my thigh, it was my crotch and I want to be clear about that. I was totally shocked, and I shook him off and just said, what’s up with that?’

She added: ‘Looking back, I sincerely wish I would have kicked him out but he is apparently a big athlete in the NFL and he’s very physically imposing, and I was afraid that I’d make him more angry.

‘The rest of the ride proceeded without incident. He is NOT safe for other female drivers.’

The NFL in June suspended Winston for three games for violating the league’s personal conduct policy, after an investigation into the incident.

After an eight-month investigation, the NFL determined he touched the woman ‘in an inappropriate and sexual manner without her consent,’ the Tampa Bay Times reports.

In a statement after the suspension was announced, Winston acknowledged wrongdoing and said he had quit drinking as a result. He had previously denied groping the driver.

‘The NFL informed me today that I will be suspended for the first three games of the season,’ Winston said in the statement.

‘First and foremost, I would like to say I’m sorry to the Uber driver for the position I put you in. It is uncharacteristic of me and I genuinely apologize.

‘In the past 2 1/2 years my life has been filled with experiences, opportunities and events that have helped me grow, mature and learn, including the fact that I have eliminated alcohol from my life.

‘I know I have to hold myself to a higher standard on and off the field and that I have a responsibility to my family, community, and teammates to live above the platform with which God has blessed me,’ he continued.

‘I apologize to my teammates, the Buccaneers organization and fans for letting them down and for not being able to be out there for the first three games of the season.’

The suit comes as Winston – who has not been charged in connection with the incident – approaches the final game of the suspension, and with the team off to a 2-0 start.

He is eligible to return on Tuesday, the day after Tampa Bay plays the Steelers.

A call to the Buccaneers offices after business hours on Tuesday was not immediately returned.

It’s not the first time Winston, a Heisman Trophy winner at Florida State, has faced allegations of sexual assault.

Erica Kinsman, who later identified herself, accused him of sexually her at Florida State in 2013.

Winston denied the allegations and said he and Kinsman engaged in consensual sex.

He was never charged, but settled a civil lawsuit with Kinsman in 2016.

Earlier that year, Florida State agreed to pay Kinsman $950,000 as part of a Title IX lawsuit she filed against the university.