Ryanair shareholders are being urged to replace the airline’s chief executive and chairman at the company’s annual meeting on Thursday.

The British Airline Pilots Association (Balpa) said the relationship between Ryanair management and pilots has become “utterly dysfunctional”, risking the continued success of the company.

Ryanair has been hit by strikes by pilots across Europe in a long running dispute over working practices.

Balpa said in a statement that chief executive (CEO) Michael O’Leary and chairman David Bonderman should be replaced. 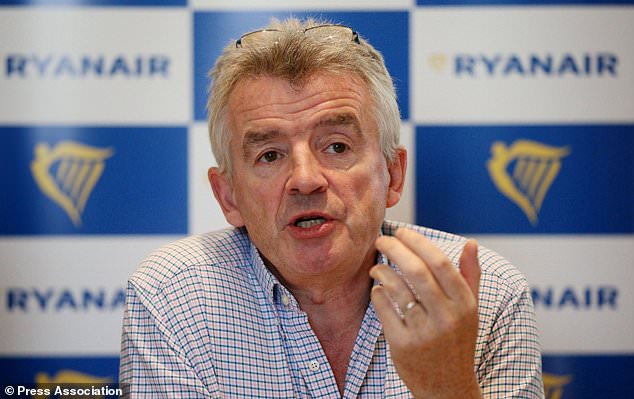 The statement read: “Management’s actions to date are often perceived by pilots as being frequently intimidating and antagonistic. It is also seen as generating operational disruption and industrial unrest rather than creating a positive and cohesive working environment for the future.

“As professional pilots, critical to the future and fortunes of our airline, many have lost all confidence in Michael O’Leary and his ability to lead the company as CEO.

“This failure of leadership is compounded by an apparent lack of oversight from the board, from its chairman and from non-executive directors, which has allowed the current negative situation and ongoing uncertainty to grow.

“Accordingly, as stakeholders in Ryanair, with shared interest in the health and success of the company, Ryanair’s pilots urge shareholders to immediately replace the CEO Michael O’Leary and chairman David Bonderman at the annual general meeting.”

Balpa general secretary Brian Strutton said: “The industrial unrest in Ryanair across Europe and among pilots and cabin crew is, in my opinion, likely to continue for the foreseeable future.

“The reason is as follows – there is a lot of pent up frustration in Ryanair over a management style that has been seen as bullying and aggressive. The staff want that to end and they want respect.

“Ryanair’s announcement last December that they would recognise unions should have been the opportunity to make a break from the past but the trust in management isn’t there to support the words.

“For many pilots and cabin crew it seems to me that they do not believe in the intentions of Ryanair’s leaders and unfortunately Mr O’Leary is usually cited as the cause of this.

“I think that while he is still there as the embodiment of Ryanair’s values the distrust among many staff is likely to continue and with it the industrial unrest.”

West Ham make arduous work of beating 10-man AFC Wimbledon
Boxer celebrates victory with tribute to Cristiano Ronaldo
Tourists have a whale of a time as massive humpbacks surface next to their boat
Six children are taken to hospital as police cordon off primary school
So much for the Boris Bounce! Tories lose Brecon by-election in first setback for new Prime Minister
Riot police blast protesters with water canon and tear gas as violence erupts in French city Nantes
ROBERT HARDMAN: Parliamentary session prompted the most puerile scenes - yet John Bercow loved it
Boris Johnson's car assailed by protestor then hit by vehicle