The charity recipe book the has thrown her support behind has rocketed to the top of Amazon’s bestseller list on pre-orders alone.

It emerged on Tuesday that Meghan has been making secret trips to a community mosque to cook with victims affected by the Grenfell Tower tragedy, and has put her name to a book of recipes created in the Hubb Community Kitchen, an initiative based close to the tower in West .

Meghan wrote the foreword to , which has already knocked JK Rowling off the number one spot on Amazon’s bestseller list, even though the £9.99 book isn’t available to buy until tomorrow.

The Duchess, who donned an apron to muck in with fellow volunteers on her visits, said she ‘immediately felt connected’ to the kitchen, which she described as a ‘place for women to laugh, cry, grieve and cook together’.

In a clear sign of the enormous influence the Duchess already wields, the recipe book bumped Lethal White, written by Robert Galbraith – Harry Potter author Rowling’s male pseudonym – Adam Kay’s This is Going to Hurt, and Jamie Oliver’s Italy down the charts to take the top spot on Amazon. 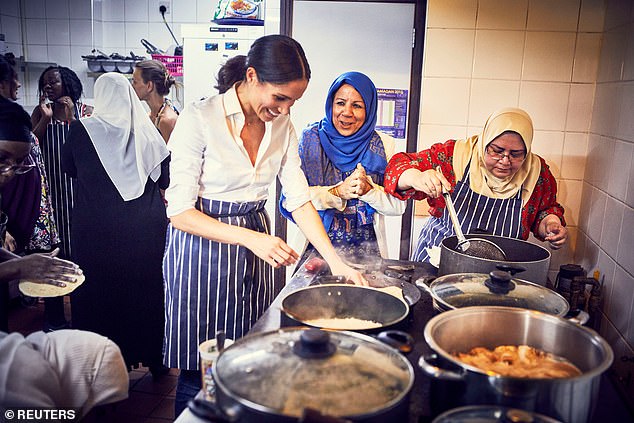 The Duchess of Sussex is seen cooking with other women in the Hubb Community Kitchen at the Al Manaar Muslim Cultural Heritage centre in the aftermath of the Grenfell Tower fire. A book of recipes from the kitchen – called Together: Our Community Cookbook, and with a foreword written by Meghan – was announced yesterday, and has already topped the Amazon bestseller list on pre-orders alone

The cookbook, which will go on sale on Thursday, was already at the number one spot on Amazon’s bestseller list today – having bumped the latest from Harry Potter author JK Rowling, published under her male pseudonym Robert Galbraith, off the top spot

Demand ahead of its release means the charity book is already outselling efforts from heavyweight chefs and foodies on the – including recipe books from Jamie Oliver, the Body Coach Joe Wicks and Deliciously Ella.

Kensington Palace released photographs of the Duchess – who also appears on the front cover of the book – chatting, laughing and cooking with fellow volunteers in the kitchen at the Al Manaar Cultural Centre, as well as stopping to play with younger visitors.

The Hubb Community Kitchen – hubb means love in Arabic – has arisen out of the devastating Grenfell tragedy in 2017.

It caused the deaths of 72 people when fire broke out in the 24 storey block of flats on June 14 last year.

The palace said the group of women behind the project had decided to gather and prepare fresh food for their families and neighbours, as a way of helping the community to connect, heal and look forward – and to ‘convene through food’. 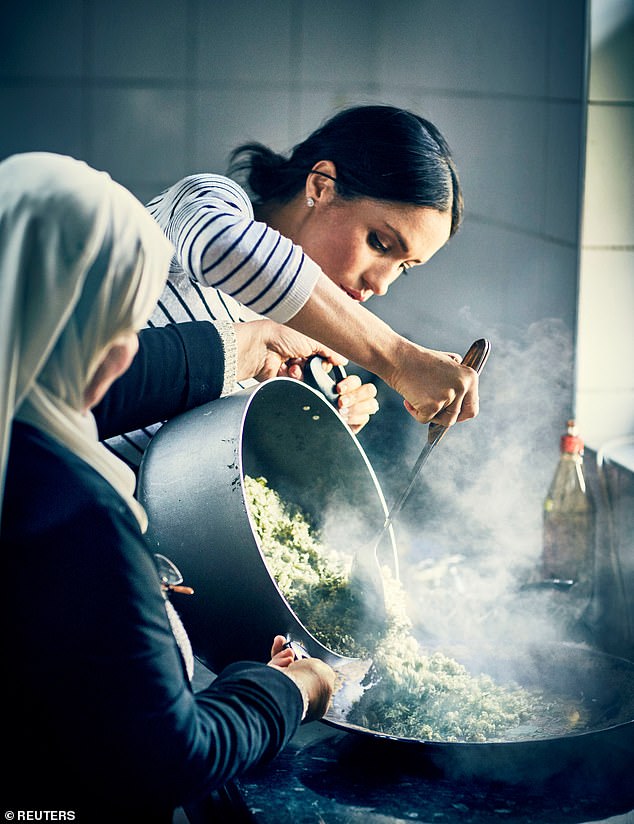 The Duchess of Sussex donned an apron to help wash rice and cook dishes with fellow volunteers at the Hubb Community Kitchen, close to the site of the Grenfell Tower tragedy in West London 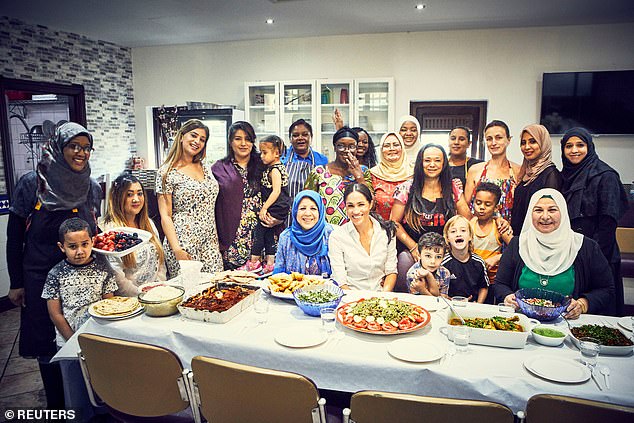 In her foreword to the recipe book, which will support victims affected by the fire, Meghan said she felt ‘immediately connected’ to the kitchen at the Al Manaar Muslim Cultural Heritage Centre, which she described as a place for ‘women to laugh, cry, grieve and cook together’

Following the blaze – Britain’s deadliest fire on domestic premises since the Second World War – the group of friends approached the Al-Manaar centre to ask if they could use the kitchen.

1. Together: Our Community Cookbook, The Hubb Community Kitchen

3. This is Going to Hurt, Adam Kay

10.  How to be a Footballer, Peter Crouch

*At the time of writing

In the new book supported by Meghan, some of the recipes are family favourites and all have been created by the cooks who support not only residents affected by the Grenfell fire but others in the community.

In the introduction, the women of the Hubb Community Kitchen wrote: ‘Our kitchen has always been a place of good food, love, support and friendship.

‘We cook the recipes we’ve grown up with; there’s no stress, and the recipes always work because they have been made so many times – it’s proper comfort food… Swapping family recipes and moments of laughter gave us a sense of normality and home.

‘We named ourselves the Hubb Community Kitchen to celebrate the thing that we all feel every time we meet – hubb means love in Arabic.’

Meghan helped put the group in touch with a publisher and her Royal Foundation provided assistance with legal and administrative issues.

Prince Harry will support Meghan when she celebrates the official launch of the recipe book – her first solo project as a Duchess – at a reception at the palace on Thursday.