A fired up Anderson Cooper took aim at the president’s son on his show AC 360 Monday night in response to a tweet and post that was shared over the weekend.

Jr shared a photo of Cooper in waist-deep water that mocked the anchor and his network, prompting a nearly ten-minute diatribe on his show AC 360 in which he explained the photo and called the first son’s posts a ‘lie.’

He then got personal, mocking Don Jr’s penchant for hunting as he stated:  ‘Now I debated tonight about whether I should even respond to the president’s son, I know he considers himself an outdoorsman who pays a lot of money to be led to wildlife in Africa that he then kills, but I don’t know if he’s actually ever been to a hurricane or a flood.’

Cooper added: ‘I didn’t see him down in North Carolina over the weekend helping out or lending a hand, but I am sure he was doing something important besides tweeting lies.’ 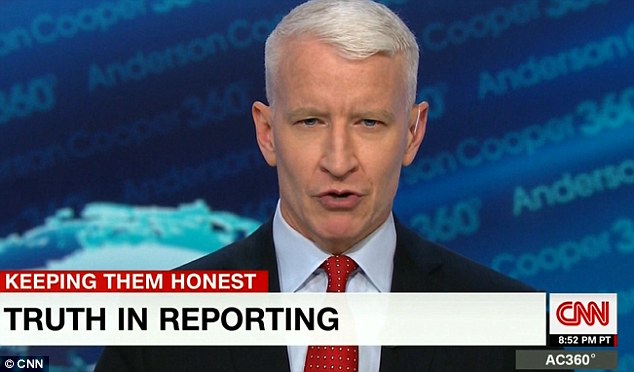 Mad as hell: Anderson Cooper devoted ten minutes of his program on Monday night to debunking the notion that he stood in waist-deep water to fake a shot 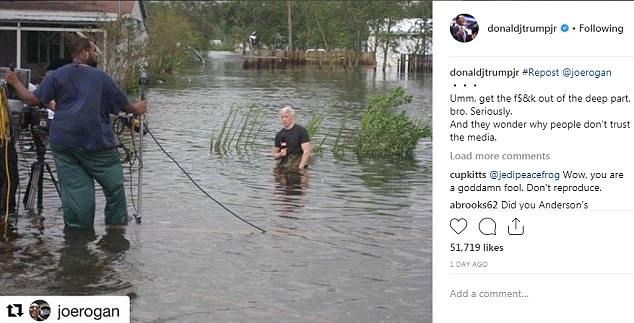 The beginning: That claim started to circulate after Donald Trump Jr reposted an image shared by Joe Rogan of Cooper (above), which Rogan suggested was from the weekend 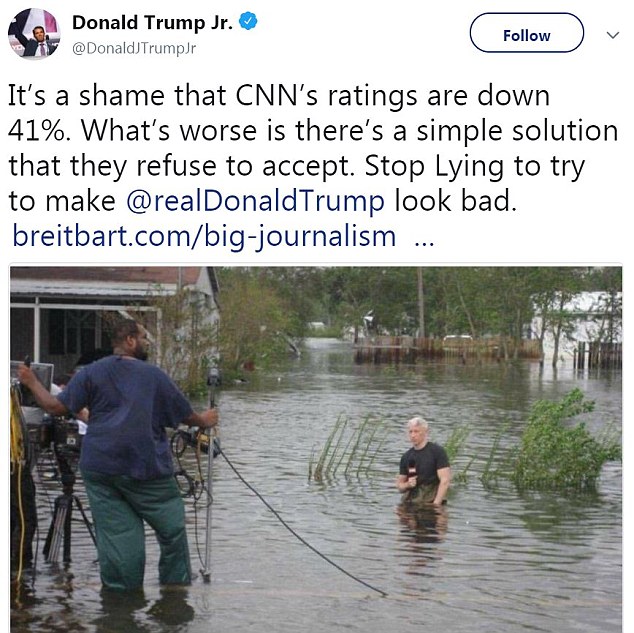 Repeat: Rogan later deleted that image, but not before Don jr reposted it on Instagram and then shared it on Twitter, attaching it to a story about CNN’s ratings (above Don Jr’s tweet)

Don Jr reposted an photo on Instagram that was first shared – and later deleted – by Joe Rogan, which showed Cooper in waist-deep water while doing hurricane coverage for CNN.

The picture also showed his crew a few feet away in just a few inches of water, prompting Rogan to write: ‘Umm, get the f%textk out of the deep part, bro. Seriously. And they wonder why people don’t trust the media.’

That post made it very clear that Rogan believed Cooper was lying, and shortly after Don Jr reposted the image on Twitter he made a point of attaching the same image to a tweet he shared with his followers.

That tweet included a link to a Breitbart story, and read: ‘It’s a shame that CNN’s ratings are down 41%. What’s worse is there’s a simple solution that they refuse to accept. Stop Lying to try to make @RealDonaldTrump look bad.’

Don Jr edited the post however to include the image of Cooper standing in water rather than the image that was attached to the Breitbart story, which showed Don lemon and CNN president Jeffrey Zucker smiling as they posed together on the red carpet at an event. 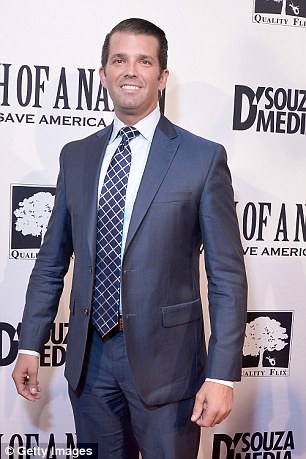 Burn: ‘I know he considers himself an outdoorsman who pays a lot of money to be led to wildlife in Africa that he then kills,’ said Cooper of Don Jr (abive in August)

A majority of his followers assumed the image was from Hurricane Florence coverage and began to retweet the post while saying as much, though Don Jr did not specify when or where the shot was taken of Cooper.

Cooper kicked off the segment by pointing out a few of the false narratives he has been accused of promoting over the years.

He cited Alex Jones stating he had faked a Sandy Hook interview with a crisis actor and people who suggested he was using a boy as a human body shield when he assisted the injured child in the aftermath of the earthquake in Haiti before pulling up Don jr’s posts.

‘Donny Jr claimed it was me in Florence faking the depths of the floodwater to somehow harm his father,’ stated Cooper.

That was not entirely true however, and Don jr made a point of harping in that as he fired back at Cooper on Twitter.

‘Not surprised @AC360 lied about me on last night. Par for the course. I never said the pic of him was from Florence. When I tweeted out the picture of @CNN it was with a link to an article about CNN’s dwindling ratings. Nothing to do with Florence,’ wrote Don Jr.

That tweet neglected to mention the fact that he actually reposted the image from Rogan at first, who did suggest in his comments that the photo was from Hurricane Florence.

Fighting back: Don Jr did not state that the photo was from Hurricane Florence, which the first son later pointed out, though it was assumed to be by many of his followers (above one of Don Jr’s tweets) 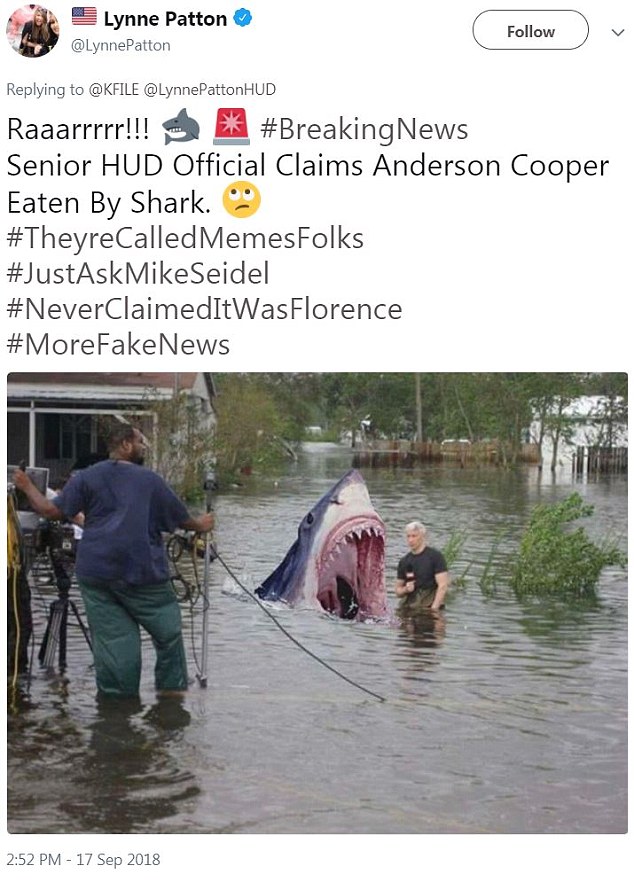 Biting commentary: The photo was turned into a meme by followers of the first son such as Housing and Urban Development head Lynne Patton (her meme above) 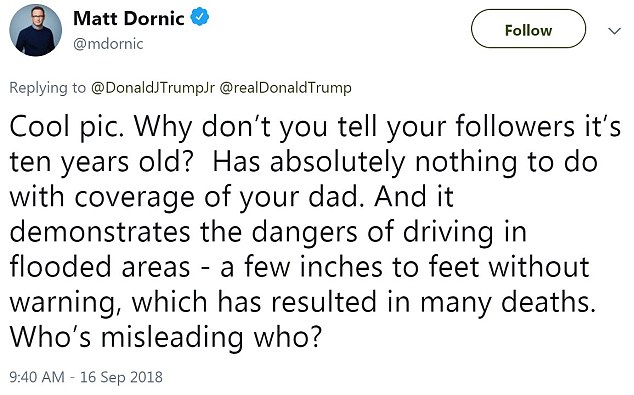 Over it: Don jr had time to prepare his response, with CNN’s vice president of communications Matt Dornic (tweet above) going after him on both twitter and Instagram when he first posted the image

Don Jr. also tweeted after Cooper’s segment that ‘the illusion created by the pic is illustrative of the bs you sell!’

Cooper was able to debunk that notion by explaining very clearly why he was standing in the water in that shot.

‘Now, at the time of the broadcast, we were told there were people still waiting for rescue. I tell you all of this to point out the obvious. There was plenty of deep water all around. The idea that I am kneeling in water to make it look deep is frankly idiotic,’ said Cooper.

‘I’m going to show you, in fact, a clip of me walking in the water, and rather than trying to make it sound worse than it was, I just want you to note that I’m talking about how the water is actually receding, subsiding.’

He continued: ‘Again, I’m not trying to play up how bad it is, I’m pointing out that this water is actually lower than it was earlier in the day. Also in this clip, before you see it, I point out that there is a road right next to us that is being used to evacuate people and I wasn’t standing on the road because I didn’t want to get in the way and invade people’s privacy.’

Prior to that, Cooper also pointedly went after a man who tweeted in response to Don Jr’s post that the anchor was kneeling in the shot.

‘Some guy alleged on Twitter I was on my knees in water to make a look deep and then said that I was used to being on my knees, which I assume is some kind of anti-gay reference,’ said Cooper.

Cooper closed out the segment in a manner suggesting he knew what was inevitably to come in the wake of his lengthy response to the first son’s posts.

‘Look, I don’t expect the president’s son to ever admit he  was wrong or one of the president’s former advisers or frankly anyone else who’s retweeted these pictures,’ stated Cooper.

‘But I at least thought that they and you should know the truth.’

Don Jr responded to that in a tweet on Tuesday morning, stating: ‘If you’re going to spend 10 minutes crying about a meme you may want to make sure you’re actually right. Good article as it shows exactly what CNN does daily to sell false truth.’

And he did not stop there.

‘Instead of spending 10 minutes (incorrectly) fact checking a meme, maybe @CNN should focus on fact checking their reporting so they don’t have another Lanny Davis/Cohen scandal? PS – I’m still waiting for an apology for the debunked Wikileaks story you wrote about me last year!’ read another tweet.

‘CNN doing what they do best. Crying & Lying. @AC360 says I said it was a pic from Florence I said no such thing. “evidence” CNN provided doesn’t even reference Florence. You guys can’t even fact check a meme,’ wrote Don jr.

The photo was not in fact a meme however, rather an image posted by Rogan, then shared by Don Jr, and turned into a meme by followers of the first son such as  Housing and Urban Development head Lynne Patton.

Her meme showed Cooper being eaten by a shark.

Don jr had time to prepare his response, with CNN’s vice president of communications Matt Dornic going after him on both twitter and Instagram when he first posted the image.

‘Cool pic. Why don’t you tell your followers it’s ten years old? Has absolutely nothing to do with coverage of your dad. And it demonstrates the dangers of driving in flooded areas – a few inches to feet without warning, which has resulted in many deaths. Who’s misleading who?’ wrote Dornic on Twitter.

And on Instagram he got a bit more personal, writing: ‘You peddle absolute garbage.  That photo if ten years old – from Hurricane Ike.’

He then closed out his comment by stating: ‘You of all people should know what it’s like to get in so deep that can’t get out, right?’

The rest of the comments on that post suggested that a number of people believed the photo was taken during Hurricane Florence.